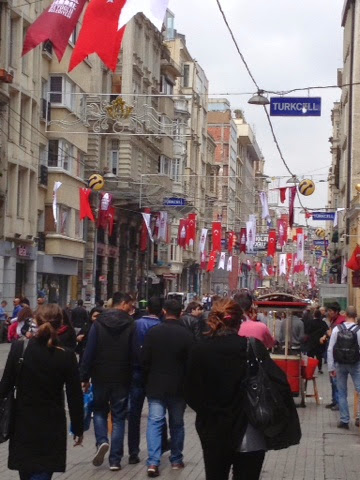 Istiklal Street, with its flapping banners and festive lights, hot chestnut stands, window cases of sweet Turkish delights, ice cream vendors doing silly tricks tossing ice cream, old bazaars, its million dark side alleys with the aura of Harry Potters Diagon Alley, and its  gaunt musicians and scraggly beggar children, is always lively.  The street leads from Taksim Square at one end, a large square infamous for its suicide bombings and political demonstrations, down and I mean, nearly vertically down, past Galata Tower to the Galata Bridge crossing over the choppy Golden Horn which separates the more modern town from the Old Town with the many huge mosques characterizing Constantinople.

I ventured out at 10:30 Sunday evening, curious about the drumming and shouting, to find out that Turkey had prevailed in a soccer match.  Hordes of young me, arms around each other, marched down the street, chanting. The bars were crowded and noisy, too noisy for me, and though a cool beer was calling me, the cacophany was a bit much for my jet lag.  I turned down a side alley from a side alley which was a bit too dark... and too silent... but it was only a short distance until it rejoined Istklal Street, so I plodded on, ignoring the shadowy figures.

I was about halfway down the alley, when I was captivated by mystical Turkish music pouring out of a window from somewhere far above. The buildings on both sides towered above me.  Mansions in their prime, which I would guess was late 1800s, but time has not been kind.  No signs advertised anything, but a small old toothless man sat quietly just inside the only open doorway.

He motioned me in. Behind him was a dimly lit circular marble stairway leading upwards along paint-chipped walls.  I took it four flights until I arrived at a door orpening into a dark restaurant, where a young man asked me if I had a reservation. Or I think that's what he asked me.  A three-man band was playing: a keyboard; a stringed instrument I did not recognize; and, drums. Alone or in their seductive harmony, each man's voice could steal a woman's soul before she knew it.  Although there weren't many people inside, the waiter said there was a problem with letting me in.  The music was wrapping around my heart and I really couldn't leave, so I looked at him skeptically and said I only wanted a beer. Another waiter came over, also good looking in that intense way Turkish men are, but much friendlier, signaled to the first guy to lay off, and led me to a cozy seat. It was a couch along the wall with pillows, which exactly suited my mood as by now it was past midnight.

After a very large beer, I realized I was starving, so I laid down my pocketful of liras and asked my waiter what I could get.  He smiled.  I knew it wasn't much, but I was hoping to maybe have another beer and some pita and hummous.  He brought me a beer.  I was leaning back quite comfortably into my couch, feeling sweetly melancholy and in love with everything, when he brought out a huge platter of food.  I wondered what time the place closed as decimating it was going to be quite a project. The others around me were drinking and singing with the band, sending their waiter with song requests written on napkins and didn't seem about to go anywhere. Others were arriving and ordering dinners, so it didn't seem like I would be pressed for time, though by then it was sometime past one a.m.

I just relaxed with it, digging the Turkish attitude to Sunday night.

There was a bit of commotion at the far end of the room.  Several of the patrons and the waiters were holding hands, doing the Turkish dance I had seen earlier in the street, the waiter at the end of the line grinning and waving a linen napkin in circles. It is odd for an American to see a traditional dance performed spontaneously, not by paid, costumed re-enactors, but by the fit guy you would consider dating, merrily holding hands with the thousand year old fat lady in a burka who would scare you with her glare in the street, and she, holding the hand of a scantily-clad tall blonde from whence only Allah knows, and she, happily holding the hand of a serious-looking weathered middle-aged man.

I had mountains of food and didn't want to leave. The band just played on. It was surreal that such a good time could just go on and on.  Would these people work in the morning?

I was just polishing off the platter and another large beer when my waiter appeared with yet more food: a plate of fruit and another beer.  In response to my startled look as there is no way my lira could have covered all of this and I didn't want to conclude a memorable evening in a Turkish jail, he smiled, saying it was "on him" because I was so kind.

I could live in Istanbul. 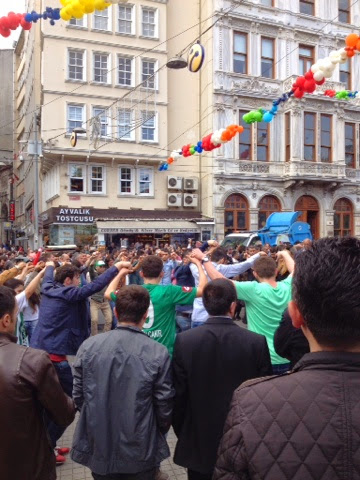 Spontaneous eruptions of drumming and dancing were common on Istiklal Caddesi. You always had to watch where you were going, not only because the bricks were uneven and actually jagged and dangerous here and there, but because the person in front of you could suddenly grab his neighbor's hand and blockade you behind a ring of dancers. You were of course, free to join.  Many pedestrians seemed to welcome the opportunity to burst into song and dance.

But there was something else going on in the street as well. 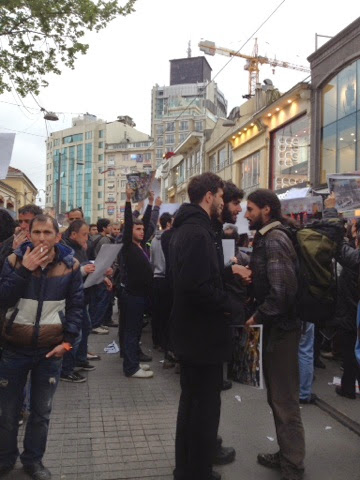 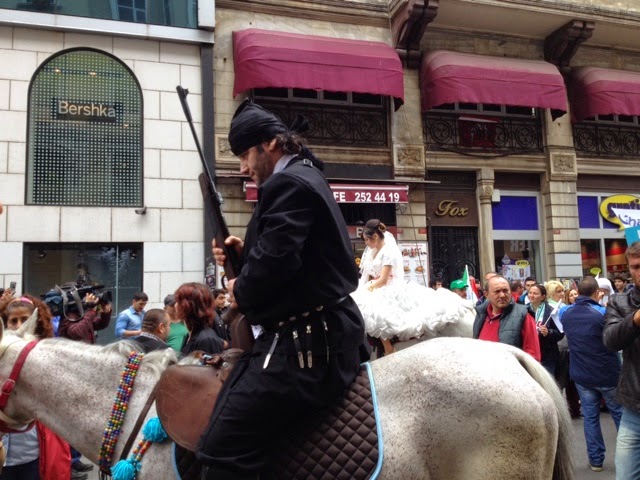 There were two brides in this procession and they were not happy. 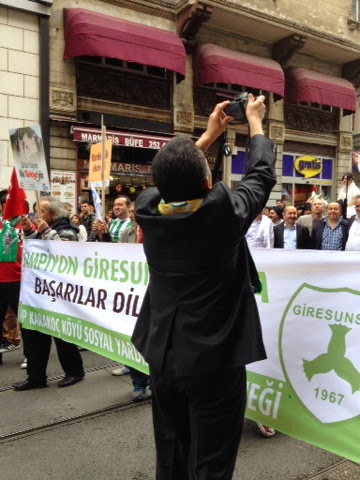 Istiklal Caddesi seemed to have a bit of everything: shoppers, beggars, vendors, frenetic football fans, ethnic dancers...and there was a feeling of mounting tension. The street lights were turned off in front of the consulates one evening.  Another evening a prominent figure was cordoned off from the street as a television interview took place. The area was swarming with policemen. Another evening I brushed a rifle barrel of a policeman when three buses of policemen suddenly pulled up in front of me and quickly disembarked. They were carefully scrutinizing the crowd as I ambled homeward.