Ah, the Catalunyans! So decisive.  None of this come si come saw stuff or autre directions or todos directions...when I was wondering which direction my hotel was when I looked up and saw this dude in front of the Maritime Museum (a museum as inviting as the chocolate museum to me and which I chose over the Pablo Picasso museum as I just couldn't invite the displacment Picasso causes in me while still feeling the presence of the Holy Host in the Sagrada Familia). 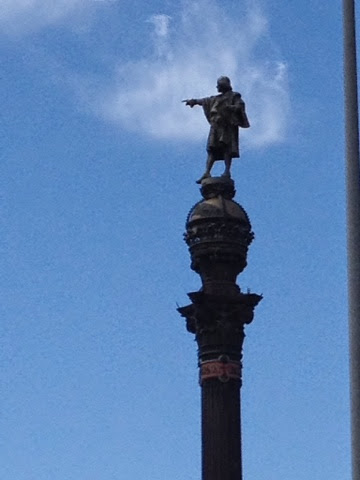 I understand that it is Christopher Columbus not pointing toward America.
They've got a weird thing going on over here about him.  There's a statue of him presenting a map to Queen Isabella at a prominent intersection in Grenada as well...
and all the buzz there is that he was actually having an affair with her. It just seems a little off to me to still be gossiping about people 500 years later.
Saw another statue of him in Genoa, his birthplace. Seriously, he is more popular in Europe than America.
The weather in Barcelona was tempestuous and unpredictable, meaning that my knapsack included several shirts and a poncho every day.  What better to do on a dark, chilly morning than visit a Gothic Cathedral? Skies were black and it was thundering, so the photo I took of Saint Maria del Mar in her niche does no convey her true beauty.  I will settle instead for your classic stained glass window and vaulted ceiling photo to give you the feel of this holy space very much revered by the locals. 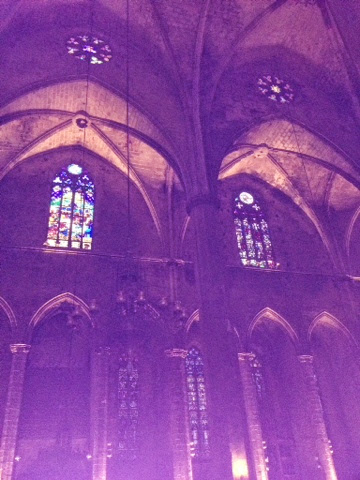 The rain was a blessing as everything was in bloom and very green.  And I probably would not have noticed these gutter spouts if water wasn't dripping out of them. 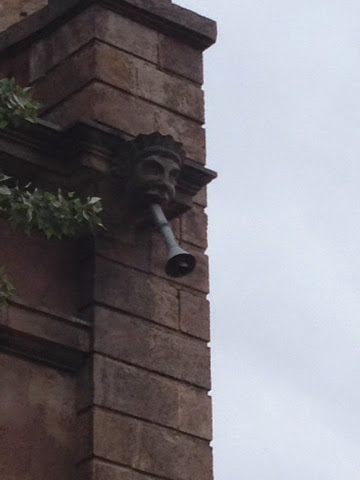 They were placed at intervals along the gutter.  I think they are a grand idea and I want some for the cabin.
I also took a million photos of the skate park near my hotel as though I am really going to build one.
I found my hotel ideally situated near several parks and the beach.
I didn't see this sign when I sat down at the beach to write the first chilly evening.. and was a bit surprised to look up and notice that I was surrounded by naked people.  I am not sure what about this sign conveys that it is okay not to wear clothes, but that is its accepted meaning. 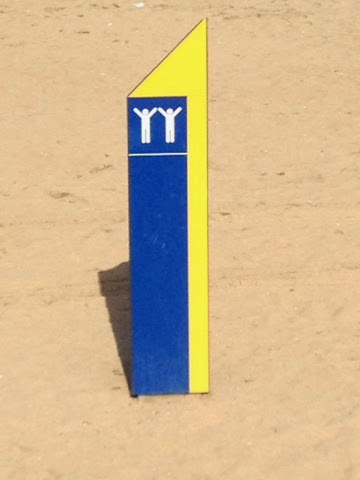 ...
The iHandy translator on my phone seems unable to explain this sign located about nine feet up on the side of a building. Things can get pretty confusing, from turning on water to buying ibuprofen when you don't know the language. I decided to play it safe and walk on the sidewalk across the street. 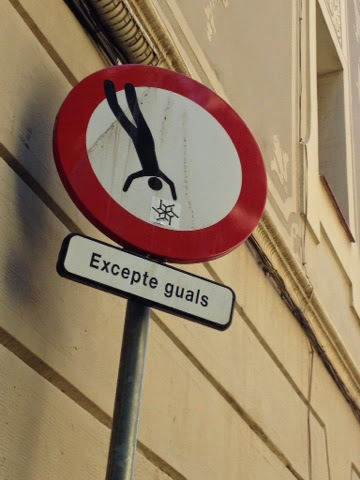 Well, I went down to St. Joseph's Market for fresh fruit juice just because they have an easy fifty flavors, great mixes of papaya and mango, blackberry and strawberry, coconut and peach, that sort of thing...and then wandered around my local neighborhood, feeling melancholy about leaving...and tred to imprint the sensations in my heart. 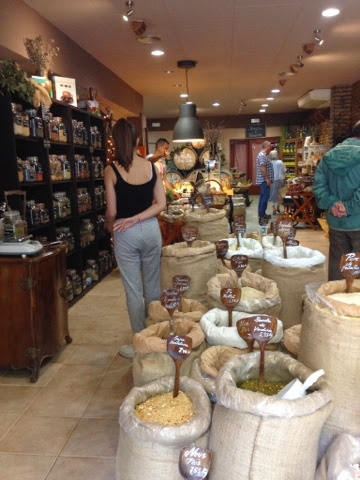 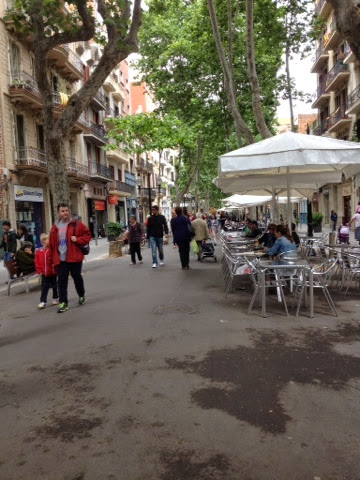 I had one afternoon left before catching the night train to Grenada, and I wondered if I should visit the interior of the Gaudi. It was quite amazing and I thank Caleb for advising me to do it.
(Plus I got to talk with a very interesting optician who fixed my glasses for me while I was waiting for my entrance time. It's actually pretty enjoyable discussing politics and culture with Europeans, a pastime I loathe in the US.)
I just thought that after seeing the features of Parc Guell I got the idea and didn't want to pack in with hundreds of tourists and see more of the same. It wasn't that way at all.  They did an excellent job of crowd control so that you can actually even pray.  I was moved to tears.  I truly felt that the interior was filled with angels and that Jesus was coming right down through the light in to my heart. 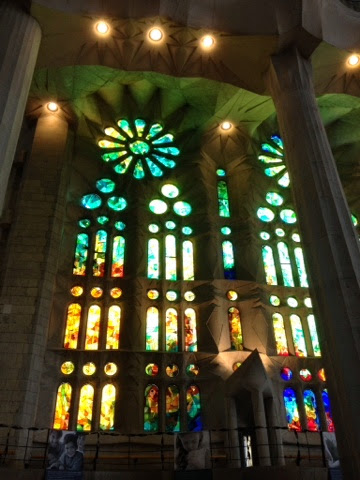 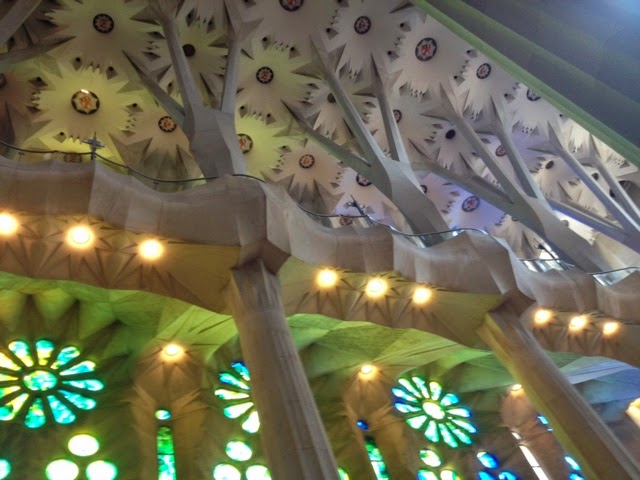 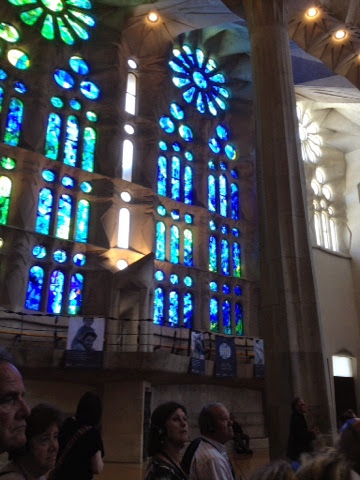 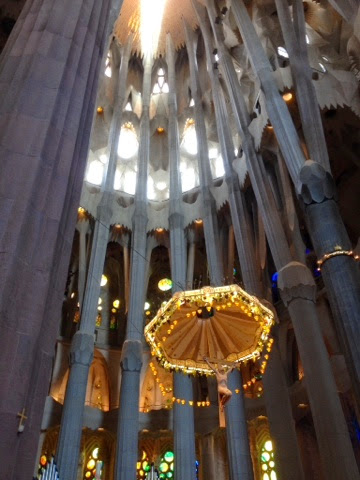 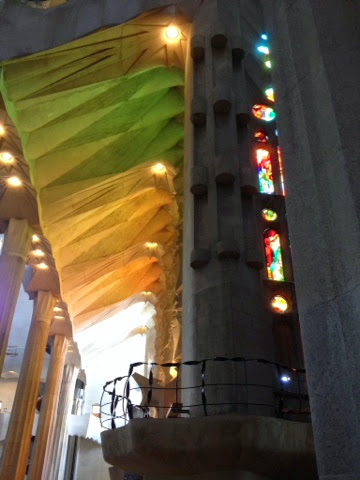 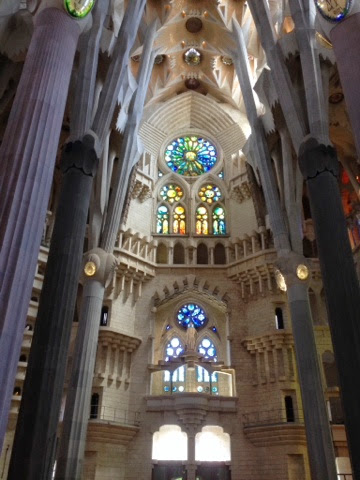 I am not sure why I am so lucky, but I have been stumbling into one amazing performance after another on this journey. The entire place became completely hushed at one point and a lovely choir with angelic voices sang several hymns with such purity, including one of my favorite blues gospels: come on children, come on down, come down to the river to pray.
The interior has such a mix of architectural features (as does the exterior) organic fruits and classical as well as cubist figures,l 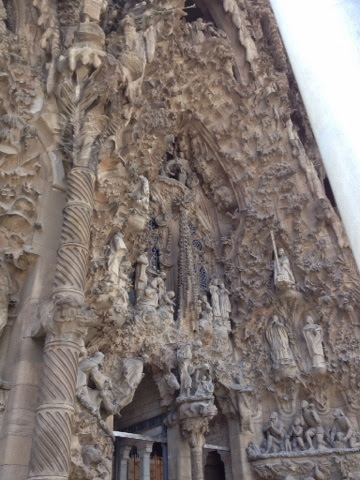 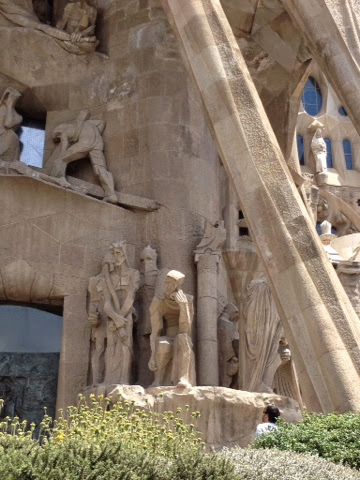 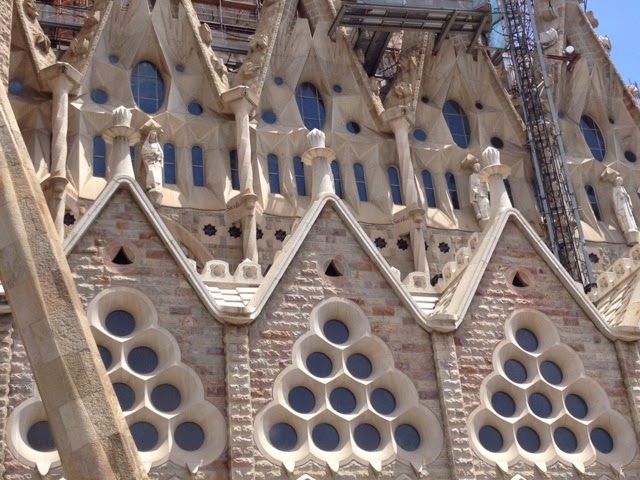 a bit of something for everyone. The result is a very open and illuminating space that pays homage to all of the main characters of Catholicism and is going to be an awesome space to worship once completed. 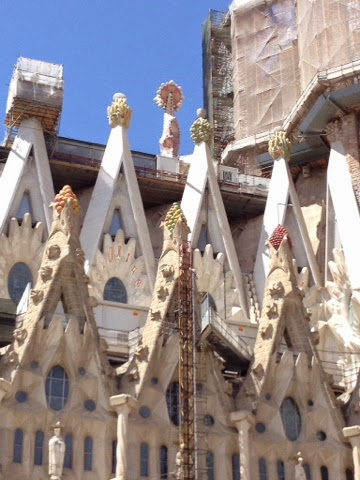