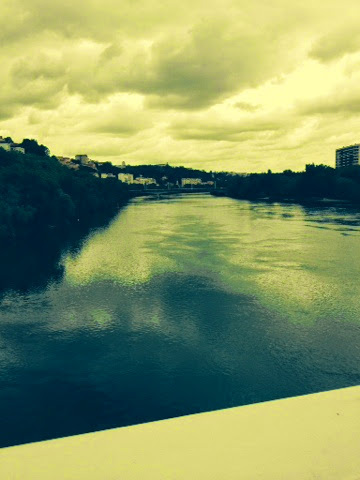 Down by the River Seine; this lovely town has two clean, broad rivers flowing through it, the Seine and the Rhone. 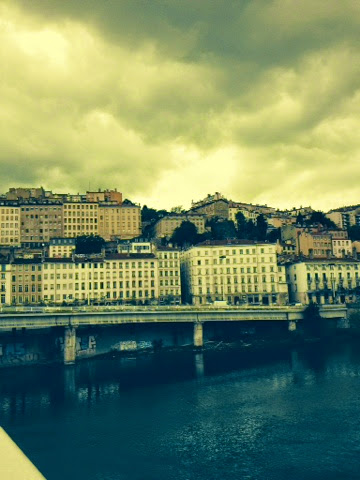 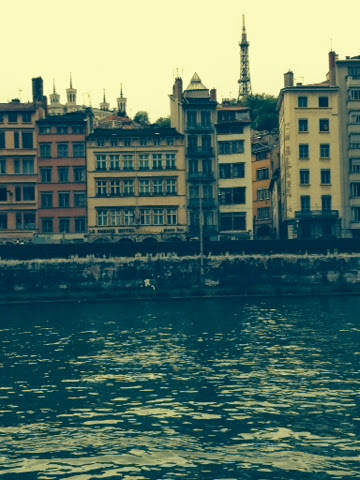 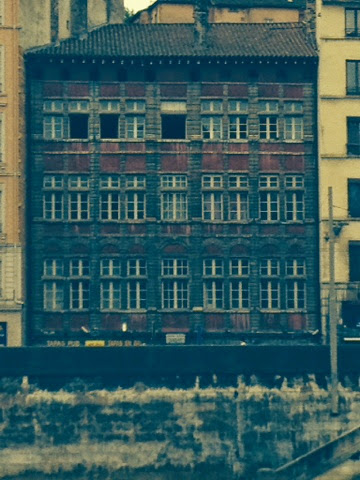 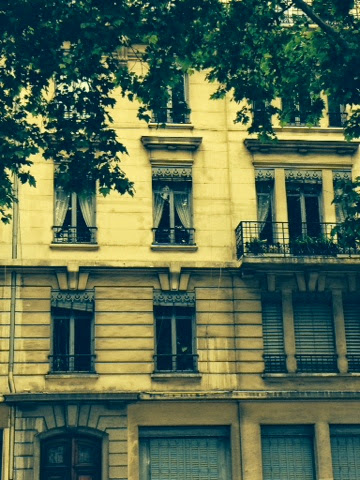 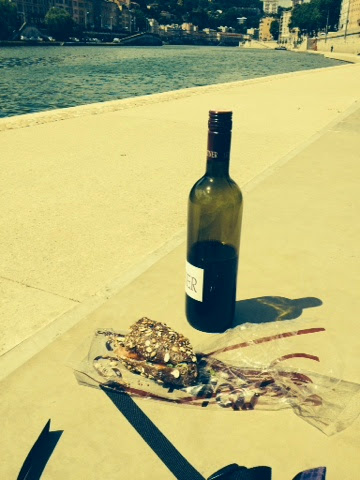 Polishing off a dark heavily seeded baguette loaded with fresh salmon and greens and working on the half bottle of wine weighing down my knapsack as well.  Dramatic clouds, huge and white, but with leaden pouches, drift slowly overhead from hill to hill, over the magnificent, shabby stone row houses, past the mossy crumbling fortresses, over the many bridges and over the benches lining the river walk where lovers kiss.  The Seine is a lovely green; perhaps its magic is reflecting in their eyes.

Funny, though last evening two thugs slipped into my hostel room as I rounded the corner, where the wi-fi is, to book a train ticket, having let my guard down thinking my roommate would be there another few minutes, and they stole cash and credit cards, it has not diminished my affection toward Lyon.

Something makes me want to stay longer than I had originally planned...and so I shall.

Such a gift: life and the possibilities just waiting to be selected.  We fall under the spell of our cultural beliefs and forget that we own our brief lives.

I feel blessed that the cutest guy in the hostel - French all the way, slim, tight jeans, sailor polo shirt, knotted scarf, cap, quick-witted, with Gerard Depardieu seductive charm - had his mobile stolen by the same off-the-street thugs who slipped in to the hostel during a busy moment and robbed me. Or was it in fact the morose looking guy hunched over the computer in his hoodie who had actually checked in to the hostel? Anyway, the cute French  guy took me with him to the police department to file our reports as my two years of high school French left me with little more than Bonjour and Merci (both of which thankfully are used a good deal here, so I do feel somewhat at home).

I probably would have only exchanged smiles with him, but actually we had a relatively jolly time (the different vernacular of various hostel roommates is imprinting me with a smattering of incongruent expressions). I am hoping that the family we met at the station who moved here from Sudan and who were robbed in Paris really do invite us over for an evening.

Monday night at the Lyon police department - uh oh, this caption was below a photo of the French guy and the family from Sudan at the police station in Lyon, but now it too, is missing! As is the iCloud backup.  Such thievery! What is going on here???

There is so much to love here:

The screaming of the French children at play during recess. Is it just the echoes bouncing off the surrounding stone that makes their laughter sound so irrepressibly joyful?

Oh, nice.  The wine is kicking in.  Despite putting matters to rest (canceling cards, changing passwords) to the best of my ability, I still was not able to settle down and sleep last night...  Nor had I anything to eat all day except one amazing pastry.  Something else to love here: I totally get the obsession with food.  I can't begin to describe how excellent the food is.  And there are hundreds and hundreds of tiny restaurants with imaginative offerings. 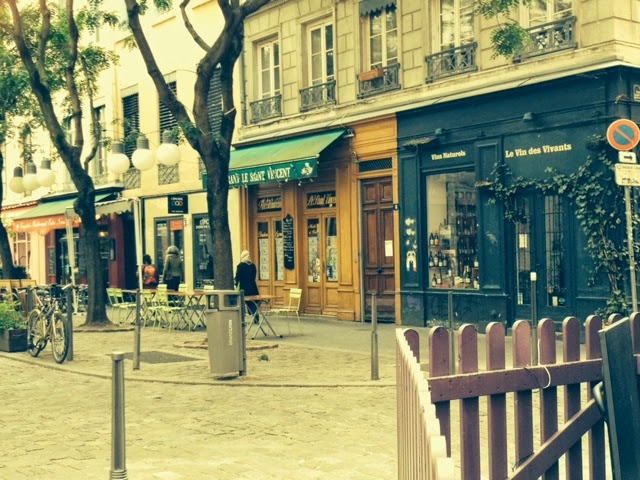 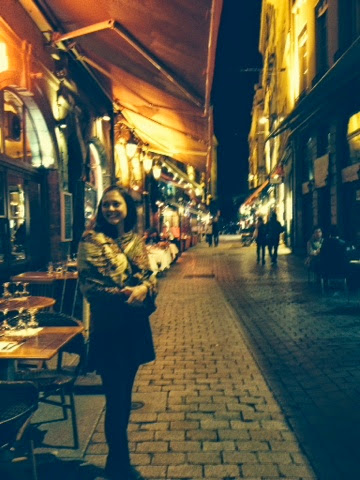 My Australian kindred spirit, Whitney, outside a restaurant where we had ravioli with foie gras and a bottle of wine around 11 pm Sunday. It was one of many restaurants happy to create a culinary masterpiece at that hour, an earmark of an advanced civilization in my book. 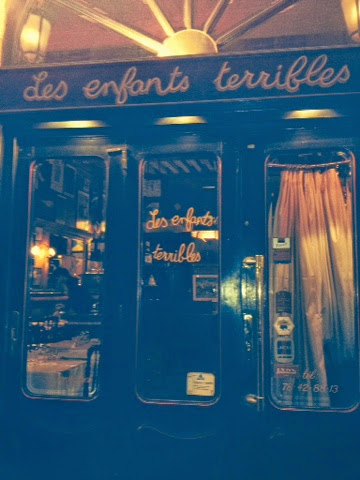 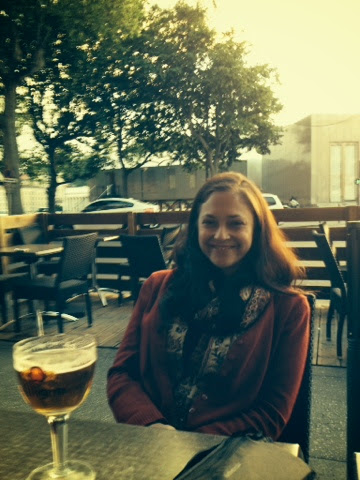 Whitney a little earlier in the evening. She is traveling the world in five and a half months.  She came from India and after Milan and Paris is heading to South America and I think wrapping up in Napa Valley.

Back to that amazing pistachio and strawberry tart I had yesterday that looked like a queen's bejeweled crown...it was so delicious that it slayed me; it wouldn't have done it justice to eat anything else...better to just savor the sensual memory for as long as possible...and then when dinner time had come and gone, I was caught up in the logistics of thievery, so it is only now that my attention has turned back to hunger.  As soon as I bought the baguette, from that same warm bakery that made the pastry and always has a line that moves quickly until I get there and stop it as I point awkwardly over people's heads to what I want in the showcase and then painfully count out my play money, mixing Swiss francs and Turkish liras with euros...  As soon as I bought it, I wanted to eat it and wondered if that might be considered impolite but there is a wonderful feeling in the air here that takes over and that is that if you want to do it, that's good, do it, especially when it comes to eating and drinking and loving.  Within minutes I passed two others enjoying their baguettes as they walked.  Drinking alcohol anywhere is acceptable too.  Is the USA the only puritanical country when it comes to having a cold beer in public? Of course one must remain well-behaved and gracious and maybe we just haven't learned how to do that under the influence.

Ah, and yet another country where you don't have to act like you are buying something to use a dirty bathroom.  Clean toilettes every few blocks.

I adore the winding stone staircases dropping below or leading uphill from the edges of brick alleys, their profusion of flowers trailing from heavy branches, blocking the view so that the destination, either up or down, is mysterious, an adventure to be pursued. 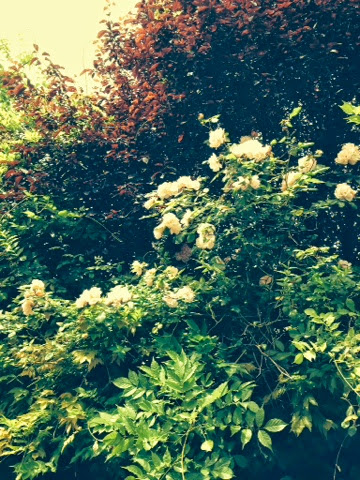 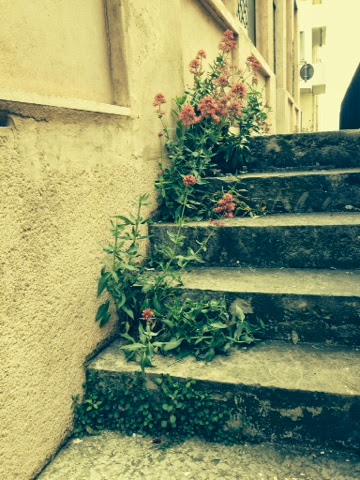 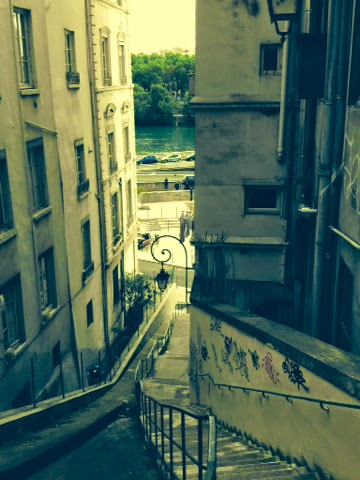 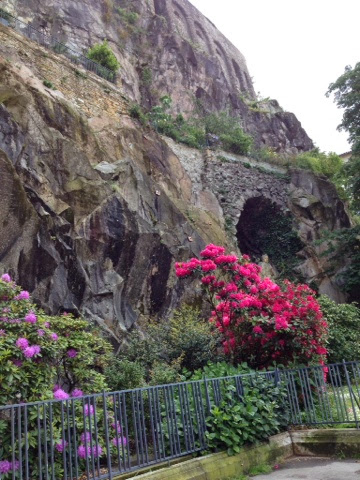 Too, I love the romanticism. Truly, there are couples kissing every forty feet...down by the river, walking down the sidewalk, in the parks, crossing the street.  And when a man looks directly at you with those intense liquid eyes with their dark shadows, and they do, you can only believe he was awake all night with a woman.  Which reminds me of something else...you can be walking along the sidewalk lost in thought when suddenly a guy on a motorcycle or driving a small black Peugot will whip right in front of you and shut off the engine.  Just as you are thinking WTF, he pulls off his helmet or slams the door and combs back his hair with his hand, looking like an ad from Esquire. And the women, they are no less fashion-conscious.  How many women do you see strolling their babies wearing tight skirts and heels? These lipsticked beauties are the norm in Lyon.  In the rain today, no one else would dare wear something as tacky as a vinyl poncho...tight leather jackets and knotted scarves or turtlenecks, that's it.

What else do I love? The driving.  They drive so-o- fast.  Don't even think about jaywalking cause they will come out of nowhere just to mow you down.  Today a woman who about had her ankles skinned by a guy making a right turn on red, laid into him, swearing loudly presumably about what a moron he was. Well, he rolled down his window and delivered his own epithets right back at her the whole time he was turning the corner and still as he was crossing the bridge.  Doesn't seem like too many folks around here are seriously preoccupied with concepts of nonviolent communication.

And I loved the unusual quartets of men playing bocci in the park.  They appear plucked from entirely different sitcoms. How did they even meet, let alone agree to organize a game?

Going down.  Another beautiful day in Lyon.