The Night Train to Grenada

Was just plain bizarre. As torn as I was about missing the scenery, I wanted to sleep on a train just because I never had. It turns out that I had to escape my four person couchette at the first opportunity.  It had a sink which we couldn't get to over our luggage and was about the size of a sardine can with two quite stout infirm elderly women - one who still insisted that she preferred a top bunk and the other who used two canes, had only two teeth, and undressed, showing us, among rolls of old fat, how she injected her insulin shot.  The third person was a very nice young woman from Seoul who did not speak much English or any Spanish - oddly my smattering of Spanish got us over a few hurdles,  but for the most part the two women continued talking at us as though we had some idea of what they were saying.
The young woman from Seoul was able to articulate that she wanted to be an angel after I expressed my dismay at her ability to continue smiling like the Dalai Lama throughout what sounded like unending complaints from these other women who also somehow got it into their heads that the girl from Seoul was my daughter. We gave up trying to convince them otherwise. What did it matter?
I took my bottle of tempranillo, cheese, anchovies and olives to the dining car where I received kudos on my selection of wine from a group of businessmen traveling together, as well as a nod of approval to my entire spread from the ticketmaster.  Spaniards seem to take a good deal of pride in their local products and in the art of eating well. 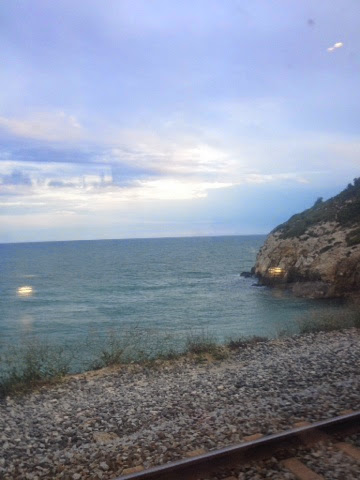 The train traveled along the Mediterranean Sea and then it got dark and the dining car began to fill up with miscellaneous folks, among them Fran and Fiona from Australia, who joined me.  They were quite amusing. We stayed up later than we should have.
In talking with Fran and Fiona, I found that there were other options for couchettes, but getting a ticket for a Spanish train is a pretty major enterprise in itself, requiring a trip to the train station if you want to assure that what you are buying is a genuine ticket along with a seat reservation.  In this case, I went to the station when I was out and about and then realized that I needed to have my passport if I actually wanted to purchase one.  I went back for my passport and then stood in a long line until I realized that windows 11-19 were for long distance tickets for today and I was not leaving for two days.  So I went to windows 1-10, which I was sent away from after standing in line because they were for only medium distance tickets and I should be in the long distance line.  So I went back to the long distance line which was a long line again.  When I got to the window, the man told me I could not buy a ticket unless I was traveling today.  I asked him if I could buy it from one of the machines.  He said yes.  So I went to the machine, but there was no option for a sleeper.  I asked a nearby employee and she tried too, but couldn't find an option for a couchette either.  She went somewhere to find out and returned with the information that I had to buy it personally from another train station. 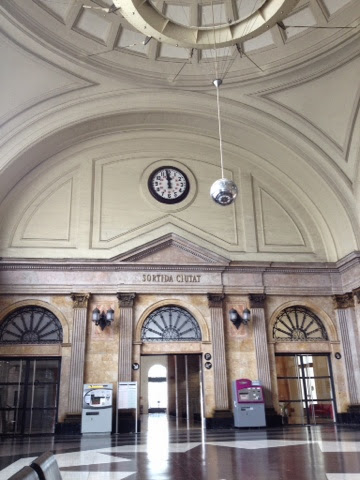 So I went to the other train station where the woman at the window was not busy at all, but demanded that I take a number.  She was very cranky and it was all I could do to get a sleeper, any sleeper. I just build these ticket purchases into my schedule now as part of the adventure.  It will take hours and the outcome is uncertain.  The train and bus lines frequently do not publish their routes more than a week in advance, posting on the websites that unfortunately the line is not running at this time, but they are hoping to improve their service and getting it running again sometime. A completely meaningless lie. It wouldn't hurt to say check back later for the schedule.
Anyway,  Fran and Fiona and I shared a lot of laughs until I finally stumbled back to my couchette bunk with the other girls.