The journey to the gypsy caves, tucked somewhere in the hills across from the Alhambra, at the same crazy-high altitude, far above the winding alleys and tiled roofs of Grenada, was long and hot.  The path first wound around the rock wall along the river and then began climbing the gorge in a pattern that made it hard to tell whether the few ramblers you could spot above or below from vistas at a cliff's edge or an old high wall, were on the same path or not.  There were no signs anywhere that said Gypsy Caves this way; I had only vague directions I wish I had listened to more carefully a few days before. The road was hot and bright, passing whitewashed stuccoed huts, ivy covered crumbling walls, the narrow sidewalk randomly disappearing to just the narrow street of sun bleached cobblestones and then reappearing again as though there might be a destination. A stretch of narrow stairs led behind a tavern and I followed them, suddenly recalling the hostelkeeper's words, "When you see the stairs, you will know you are in the right place."
It became to seem unlikely that it was indeed the right place when the stairs led vertically beyond a vacant stone hut the size of a tiny jail and then through a thicket of sticky vines growing across a path that became sand and then simply stopped in front of some barbed wire and a heap of broken glass.  No one likes to turn around and this was particularly hard as it was truly almost ninety degrees straight up as well as ninety degrees Fahrenheit outside, my sandals had no tread, I had no foothold and a knapsack that gravity was pulling with all its might. So, back on down to the road.  There were a lot of hours of daylight left.  Unfortunately, the small taverns along the way with the bony dogs circling for meat and the grinning toothless men chasing them away looked a little too sketchy to patronize - as tempting as a cerveza was becoming.
The last three quarters of a mile was dotted with small signs with arrows ostensibly pointing to the museum of the gypsies, the entrance to their caves.  But the signs were very old and the directions more like a treasure hunt than anything else, taking me off the road, behind a convent, up more stairs, around some bends and then yet up another amazingly steep path. It seemed likely by then that the museum had long been closed down and no one had bothered about the signs still pronouncing it open, so as I was rounding the last stretch where huge vicious dogs snarled from behind what was hopefully a fence, I had pretty much given up and simply hoped the dogs would not rip off my legs.  And so it was a surprise to arrive at a small hut, where a nice man came out and requested five euros.
When I later told my friend Margaret that I went to the caves to search for a bracelet I had lost in a past life, she laughed and told me she had the same thought.  She had come to Grenada thirty years ago and lived in one of the caves before they were procured for the museum. I knew which one by her description.  They were really sweet, whitewashed, divided into separate rooms, with lots of nooks and ledges and a cool respite from the heat. 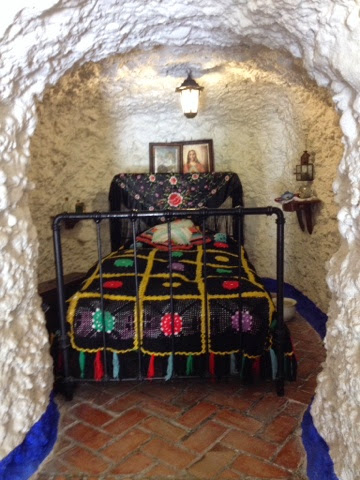 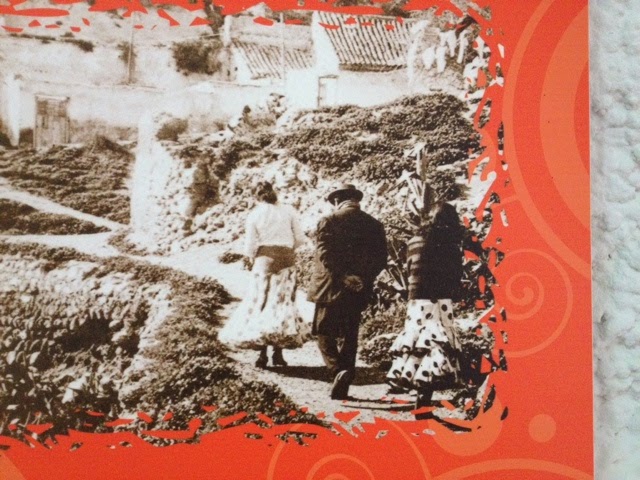 The explanations of Gypsy life, the artifacts, iron working tools, a weaving loom, baskets, animal harnesses, pottery as well as snippets of gypsy songs about their lives and actual photographs, video recordings of cave dwellings cross Europe, sketches of local birds and habitat, the ecosystem still intact and the recordings along with the explanation of the gypsy influence on flamenco music made it all seem very near.  I told myself then that I must see a flamenco performance, thinking at the time that it was artificially preserved as a money-making art form for tourists.  Now I know that it is so much more than that.  It is a deep and contemporary expression of Andalusian passion, so much so that as I sit in a park in Seville writing this, I hear flamenco playing from the sound system of a passing car.  I have since walked by many people on the streets of Grenada, Ronda and now Seville, clapping their hands flamenco style, young and old alike.  And the beautiful voices of song, from the groups of schoolboys to the solo man walking along, are gypsy ballads.  I had thought of it as nothing but a dance, a dance whose movements I know a bit from a dance instructor I once had, but I did not understand that it is so much more than that.
Passing the venues advertising flamenco performances on my way back down the hill, I tried to recall which one Margaret had recommended.  Still, at the time I was torn.  The gypsy caves made me feel there was a vibrancy I should not miss, but I wasn't convinced it still existed and I was not relishing the thought of paying too much to be packed  into a venue of tourists for a more-than-likely disheartening experience. I was relieved to see a quartet, a drummer, chanter and talented male and female flamenco dancers in a cathedral plaza on my way out for tapas.  I tipped them and felt satiated. 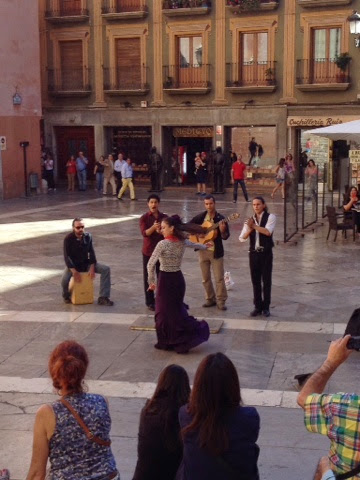 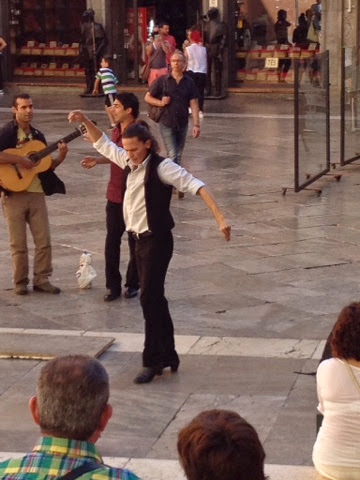 Tapas, small dishes of usually interesting and delectable food, were first thought of in Grenada to combat the problem of insects getting into drinks.  Bartenders served small plates of food on top of the drinks, gratis.  And so it is the Grenada way to provide free tapas with every drink, a really great inexpensive way to eat. And there are a lot of tapas bars so you can easily go from one to the next and experience an excellent variety of food and atmosphere. It was in my first tapa bar that I met Margaret, who sat down beside me and exchanged a life biography remarkably similar to mine.  She is my age and had even recently quit her job (a longtime nurse in Germany).  This has happened to me so many times that I have to believe in a physical theory about like energy attracting like. Or that a lot of people quit their jobs and travel.  We had an excellent conversation.  I seldom enjoy discussing politics with fellow Americans, but it is actually quite interesting with Europeans because they see our situation from the outside.  I have heard the viewpoint enough now that I understand why the often-cold reception.  We only want war and we don't care about enjoying life's moments or the health and poverty of our people, only about individually getting rich. I try to explain the omniscience of our military-industrial complex and that money begets power begets money, because they do not know that it is the lining of our congressmen's pockets that keep the war machine and the oil industry growing and that governs our government policies.  They do see the propaganda of Fear being used, but rather than seeing the political parties manipulating the uneducated, again they think it is the individual American's choice of a mindset.  And the Fear is so pervasive, it is spreading to Europe, Margaret complained.
An aside because around this point, two ladies fom Australia (there are a lot of Australians traveling around) sat next to Margaret and our conversation turned to why they chose Grenada.  'Why, we are architects,' they said, 'so we had to come.' I told them how earlier in the day when I was touring the Alhambra, I had heard my late husband 's voice in my head.  He was a historic architect and told me that he was glad I came and that he was here with me.  I hadn't heard his voice in a long time and I really didn't want to be cracking up this early on in my adventure, so I mumbled, okay, if you are here, show me a clear sign right now.  I rounded a corner and came upon a window seat. He said,  "There. Right there." I love window seats and he built me one in our farmhouse because of this.  One of the ladies was so moved with my story that she began to cry.  "Of course he is with you," she said.
So back to having just seen the flamenco dancers.  I was poking around the alleyways searching for the best tapas bar when I heard, "Chica! Chica!" I turned to see Margaret at a small table with a glass of wine and her books.  She is studying Spanish at a sweet little avant-garde school in Grenada, trying especially to learn medical terms, so that she can help translate from German to Spanish and vice versa and not have to practice nursing anymore.
I told her how the gypsy caves made me want to hear flamenco.  "Chica," she said.  "I am going to see a very famous gypsy man and guitar player peform in a tiny bar not far from here in a little bit. Do you want to join me? It is not a tourist place," she added. "You will be amazed." She had to wash and change, so we agreed to meet within the hour and go together. 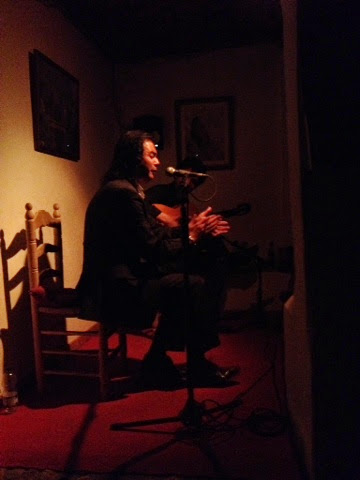 The venue was small, fitting only about twenty of us, which surprisingly included a few of Margaret's colleagues whom she had already described to me, so it was very intimate.  Not a tourist within earshot.  A fine local sherry was served from its cask.
I never heard anything as powerful as the gitano's lament.  It was as though he was channeling the entire sadness of the world.  And the flamenco guitarist, finely attuned to the balladeer's improvisation, smiled and translated the intense emotion in to joy.
At the intermission, I shared my observation with them.
"That," the gitano replied, "is Flamenco."
The audience, who evidently understood Spanish much better than I, laughed when the gitano turned to me and sang a ballad about the hopelessness of falling in love with a gypsy man, their plight not being an easy one.
After the performance, through a translator, I told the eternally sad gypsy man, "I am you."
And I told the guitarist, "You are me," meaning you are who I have made myself be to get through this journey with grace.
There was no dancer present and yet that was flamenco.
I saw another strong flamenco singer at an Andalusian festival in Ronda. 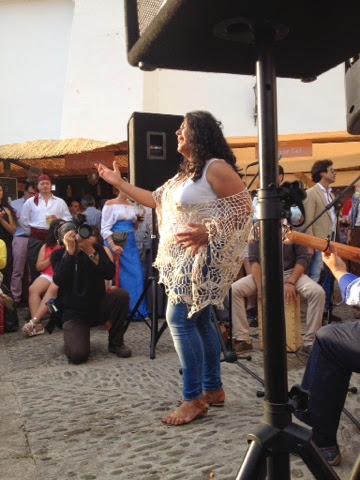 She was accompanied only by a woman clapping the beat. 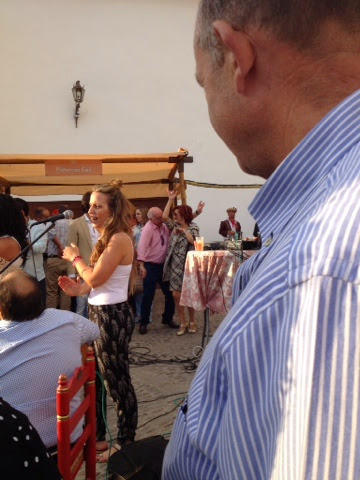 The crowd could not resist dancing.
And then in Sevilla, a local man I met invited me to a local club down some winding alleys where I watched another moving performance to a packed crowd of Sevillians. 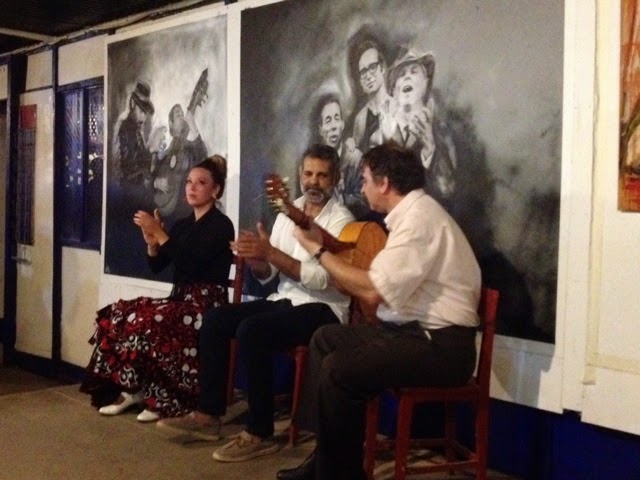 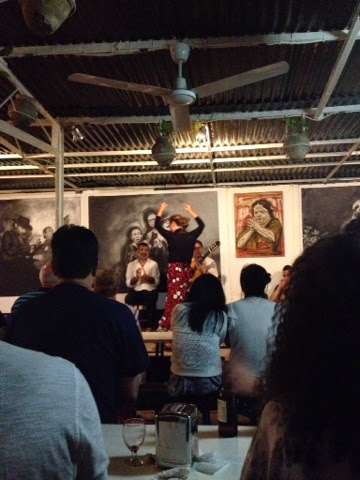