The holidays are a magical production... beginning with extreme efforts to scare myself at Halloween 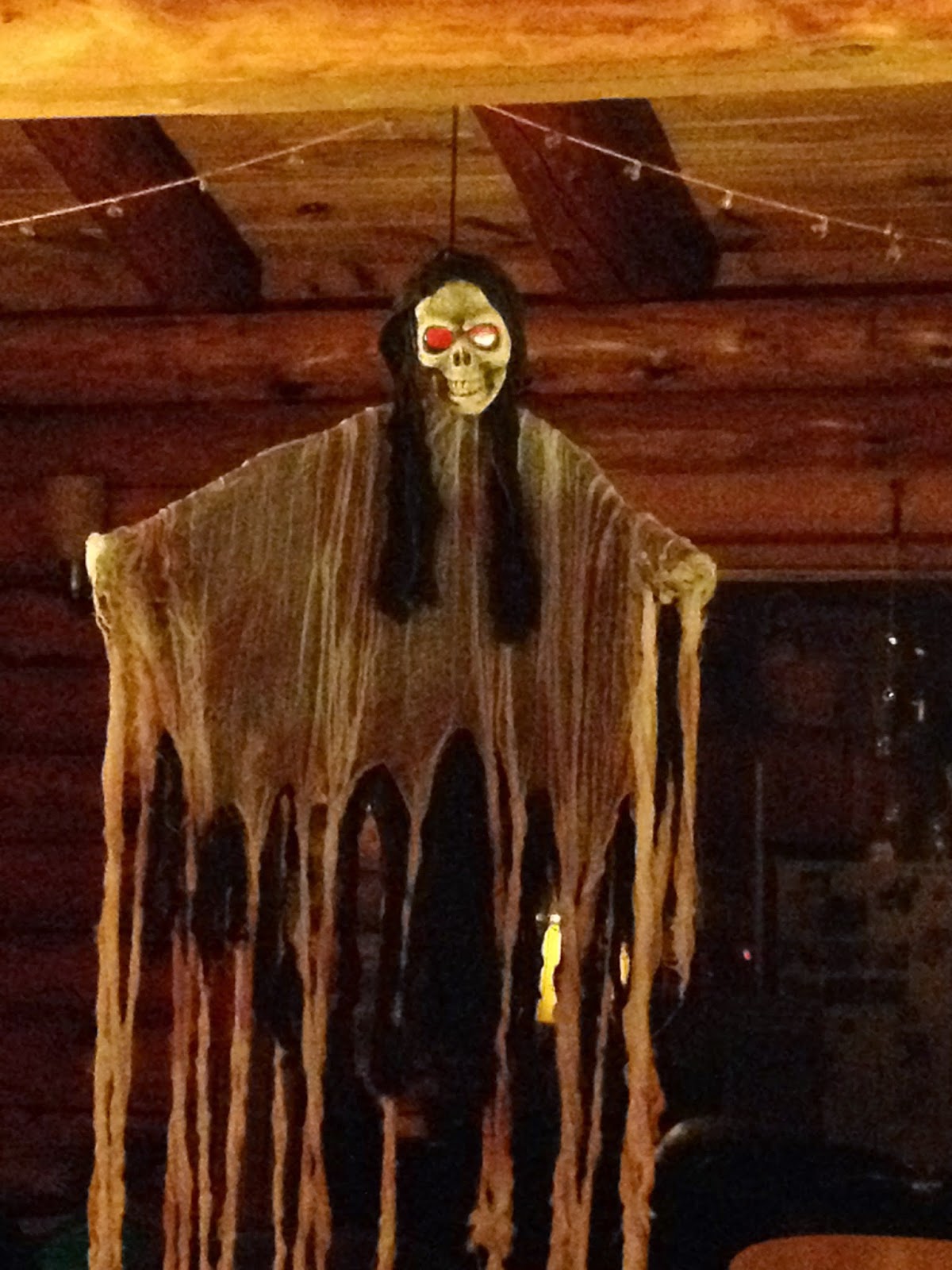 Setting the scene...the cabin is very remote and surrounded by forest.  Only this week a bear rummaged through the garbage and dragged off a fifteen pound bag of dog food from under the porch.  The night sounds here are screech owls...the shriek of a screech owl is terrifying even when you know what it is... packs of wild coyotes traveling down the path just behind the house, the winter wind roaring through the woods and slamming into the cabin... and plenty of unnameable mating calls and ghostly cries echoing across the hills.

So, one black night when I was alone, and padding quietly down the hallway into the living room, this guy with the red flashing eyes, suddenly swung around from his view looking out the window to confront me with one red eye and one white eye flashing angrily.


...And then I get these photos of my heretofore sweet granddaughter.


I knew we were on the heels of adolescence, but I wasn't quite ready for her transformation from this (taken only two months ago) 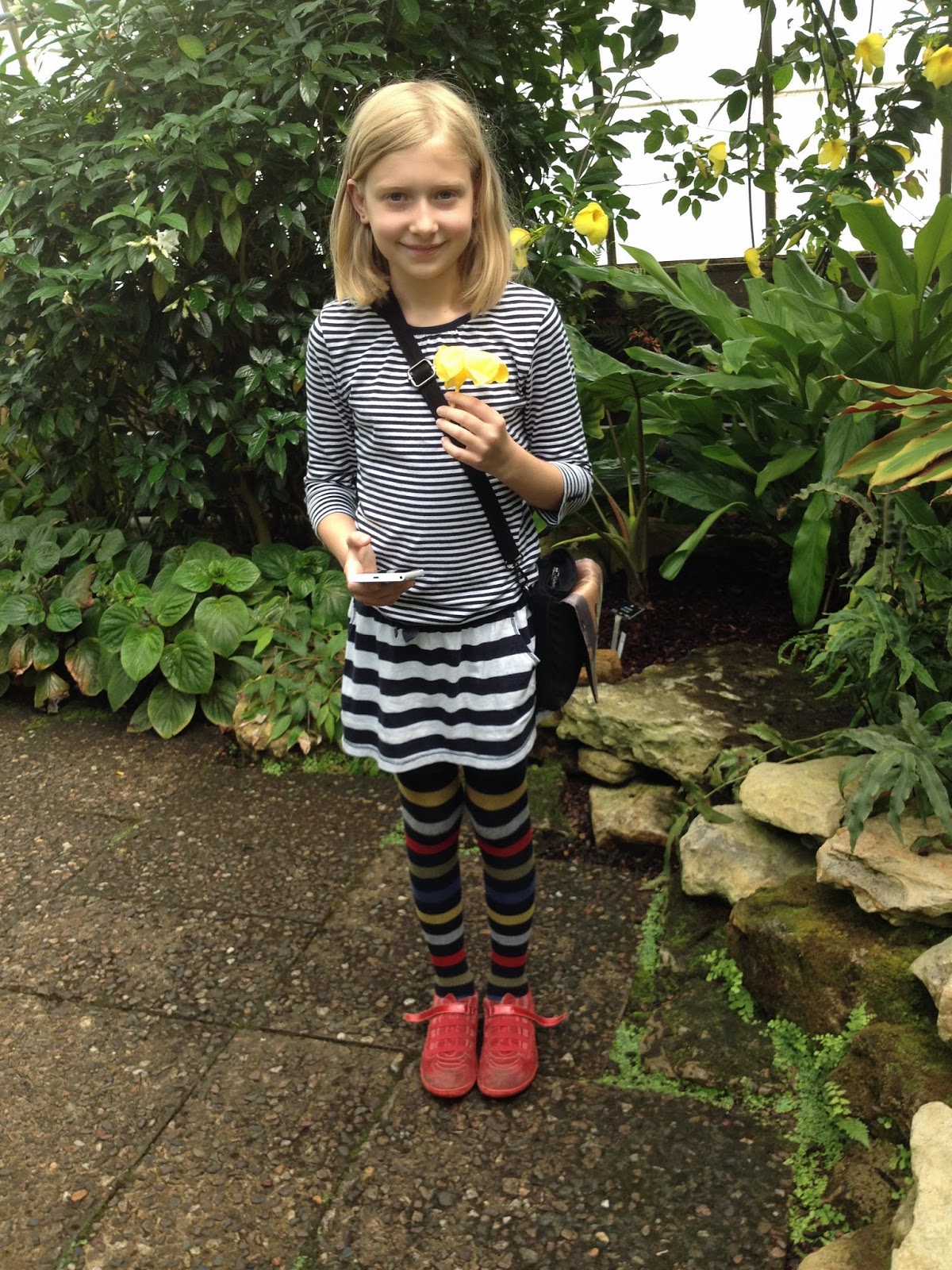 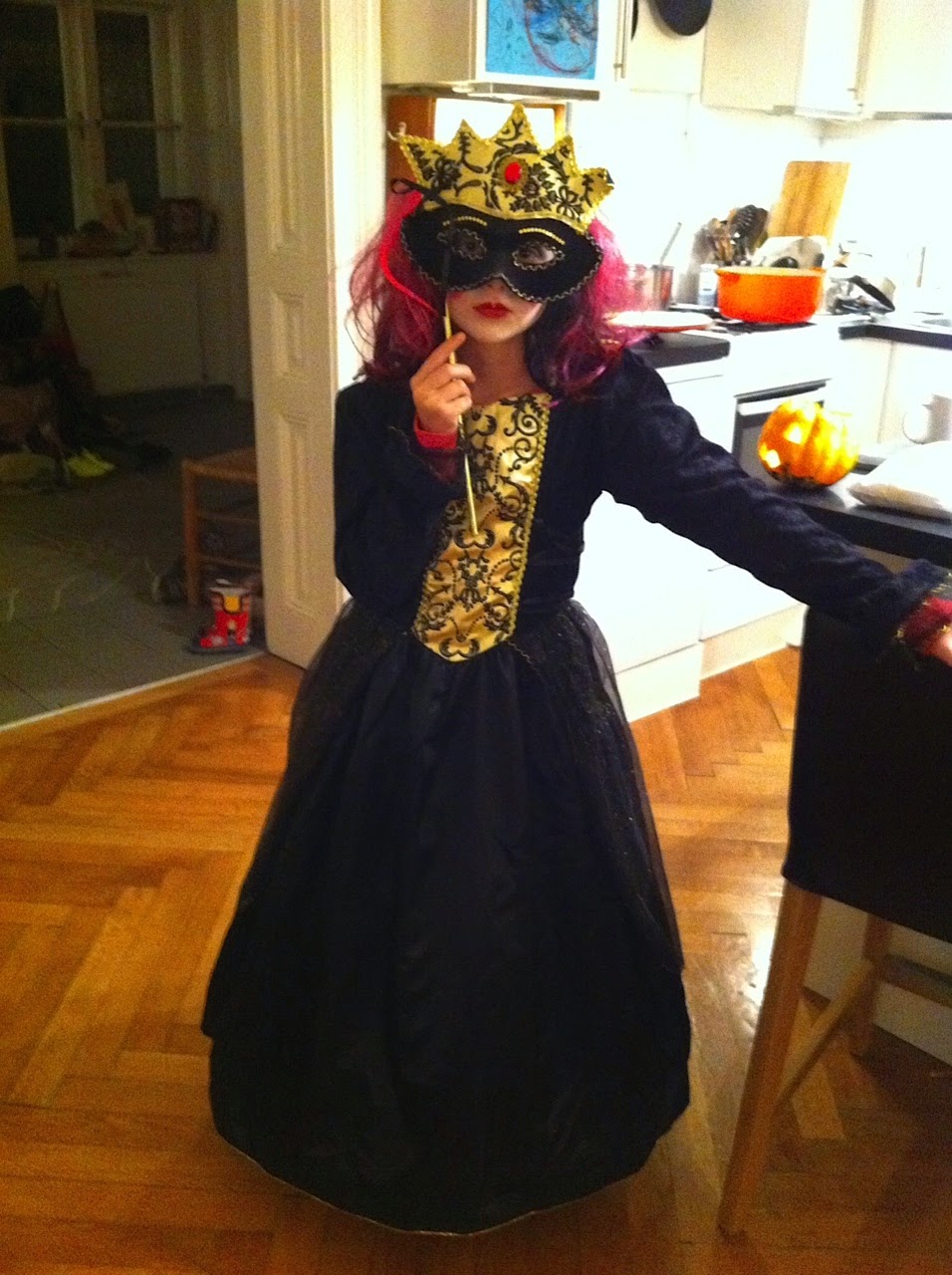 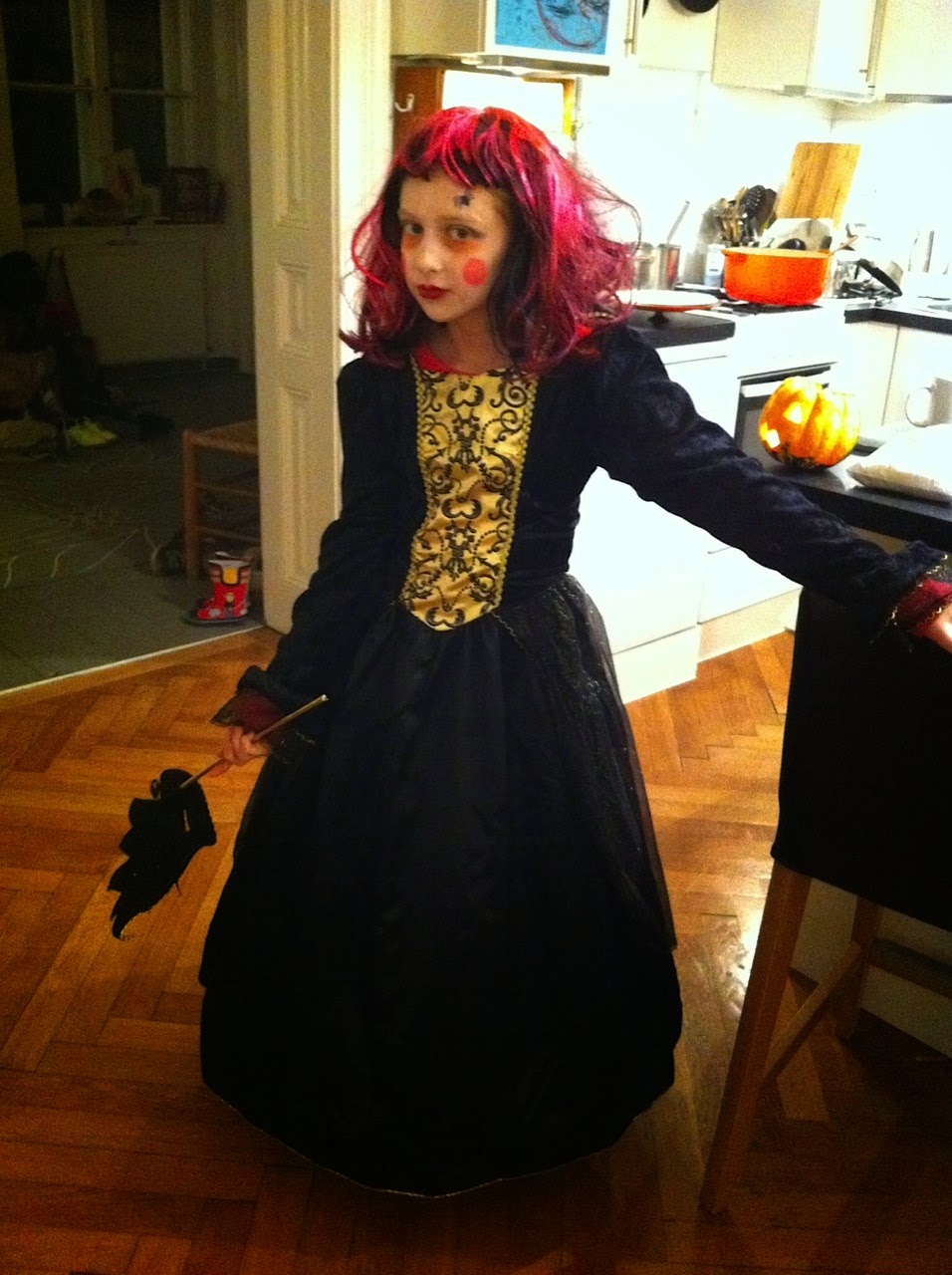 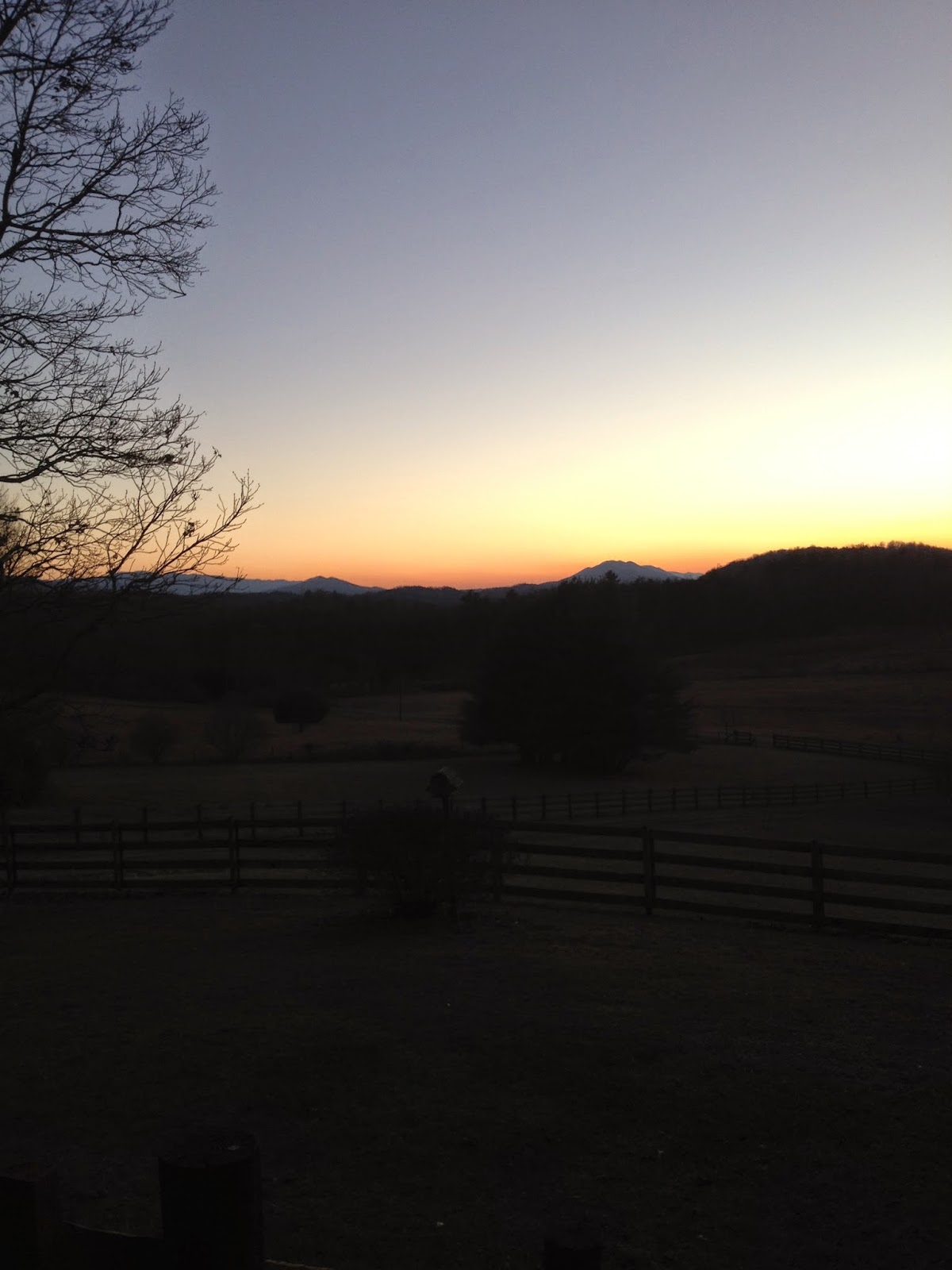 lost the mellowness of autumn, darkening earlier with the crisp chill of winter 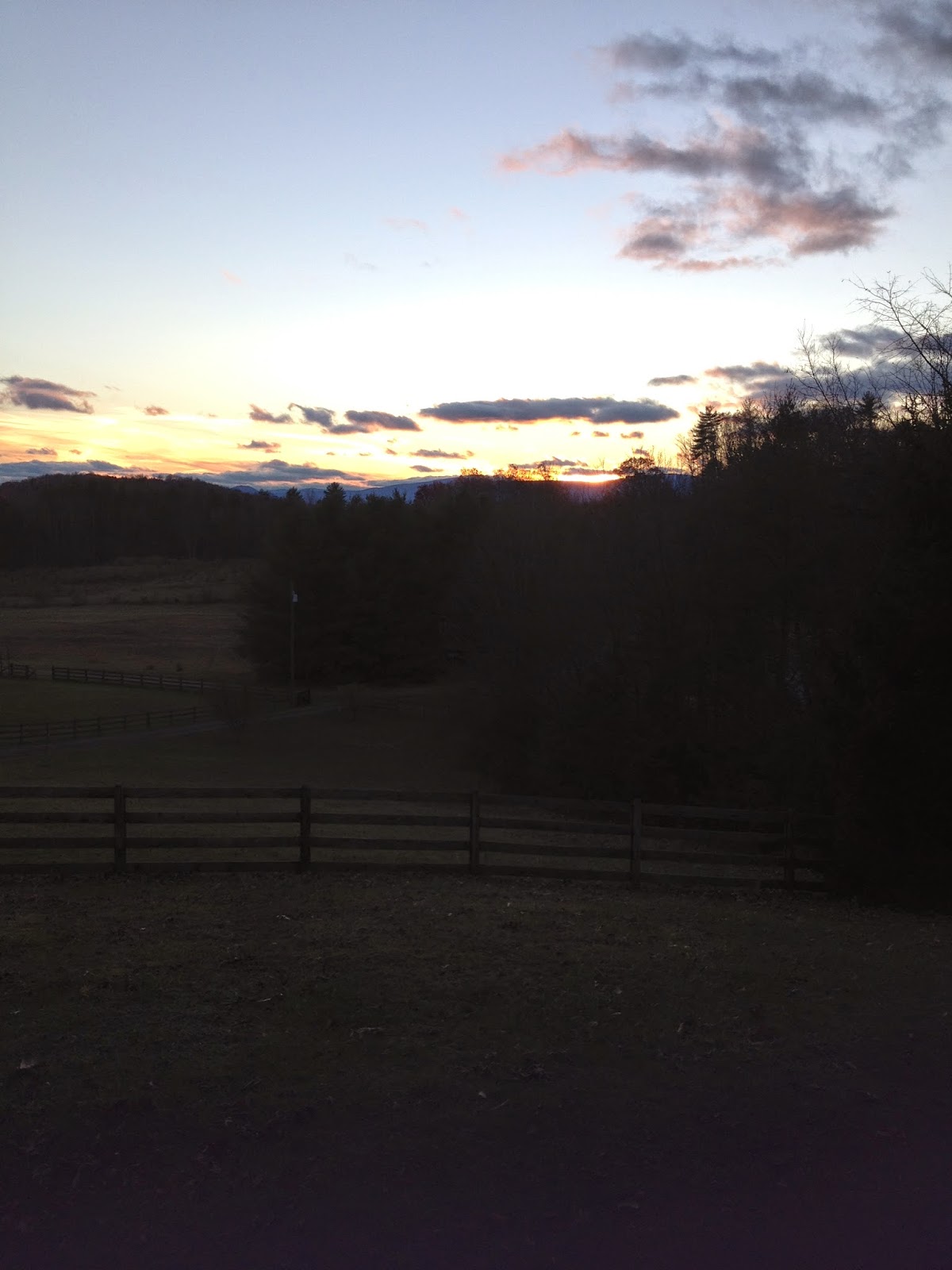 November days were shorter and passed quickly.  Our small gathering rescheduled our Givingthanks to more easily accommodate our respective schedules, which afforded the luxury of a quiet Thursday, and inspired me to just go for a simple elegance come Saturday. 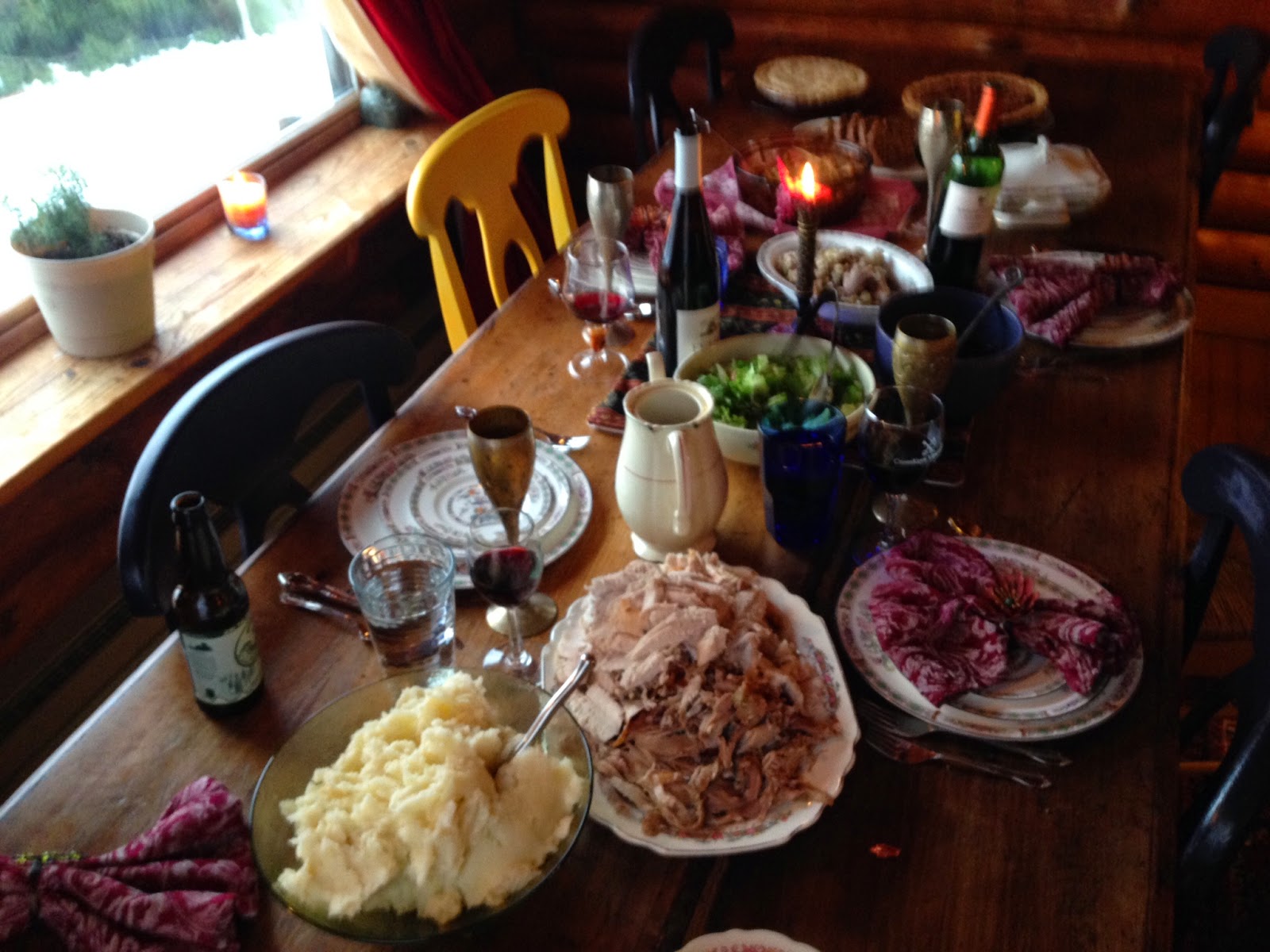 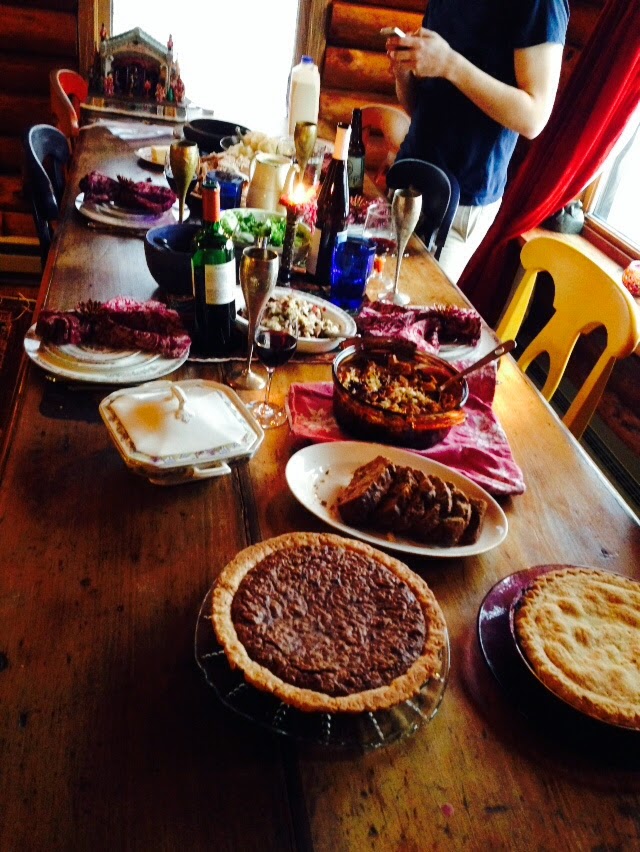 The weather teased us intermittently with possibilities of a white Christmas. 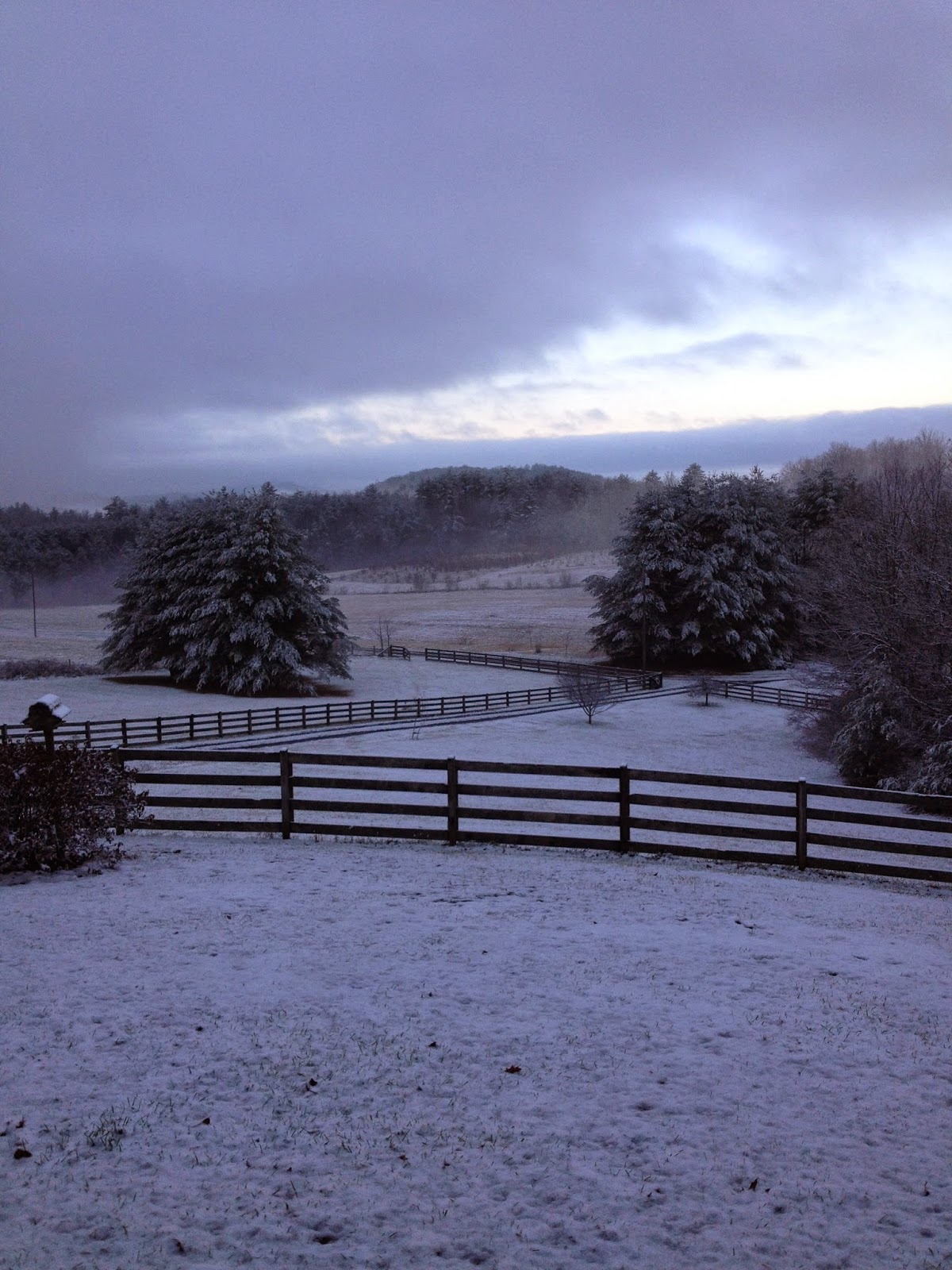 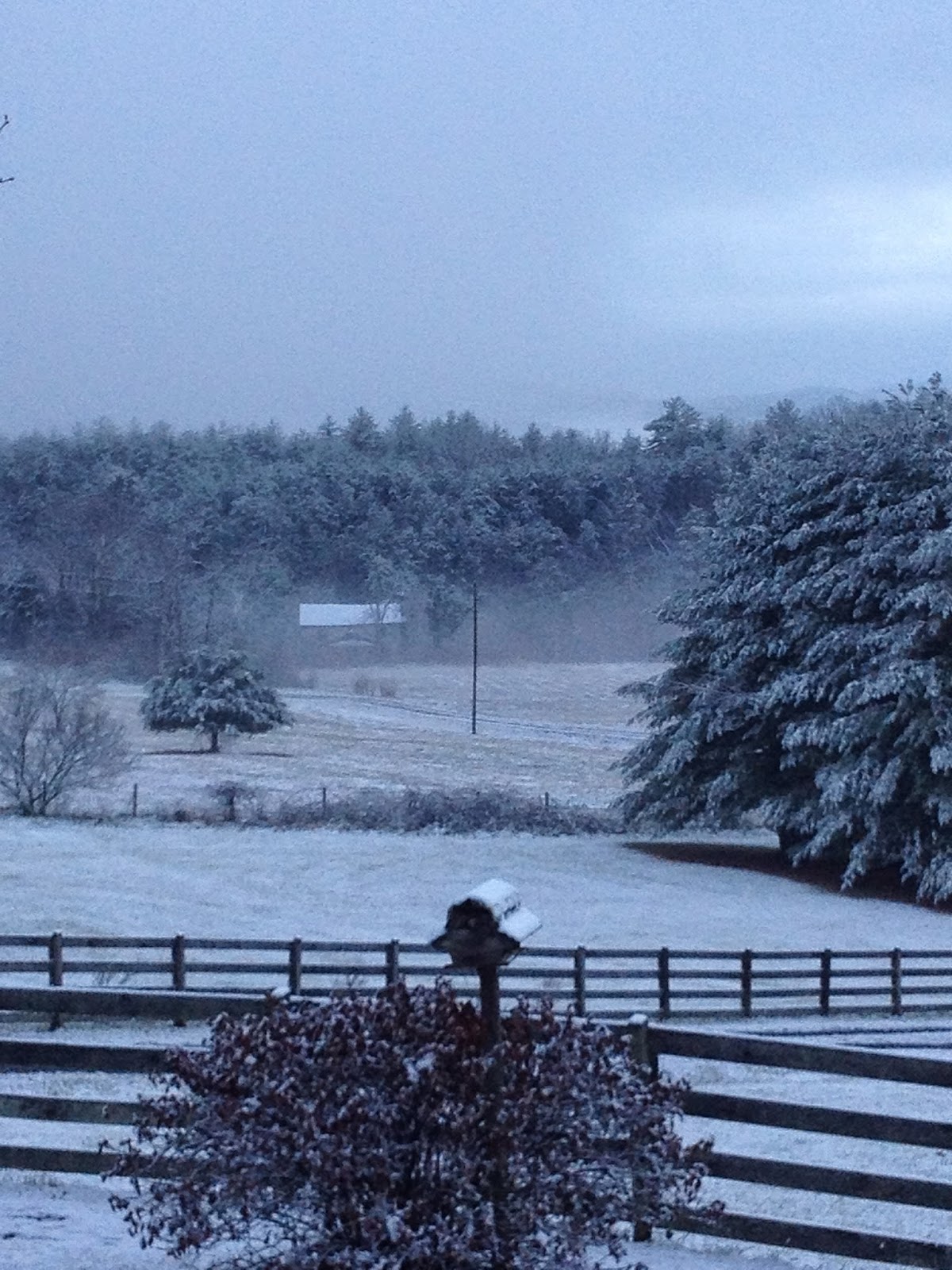 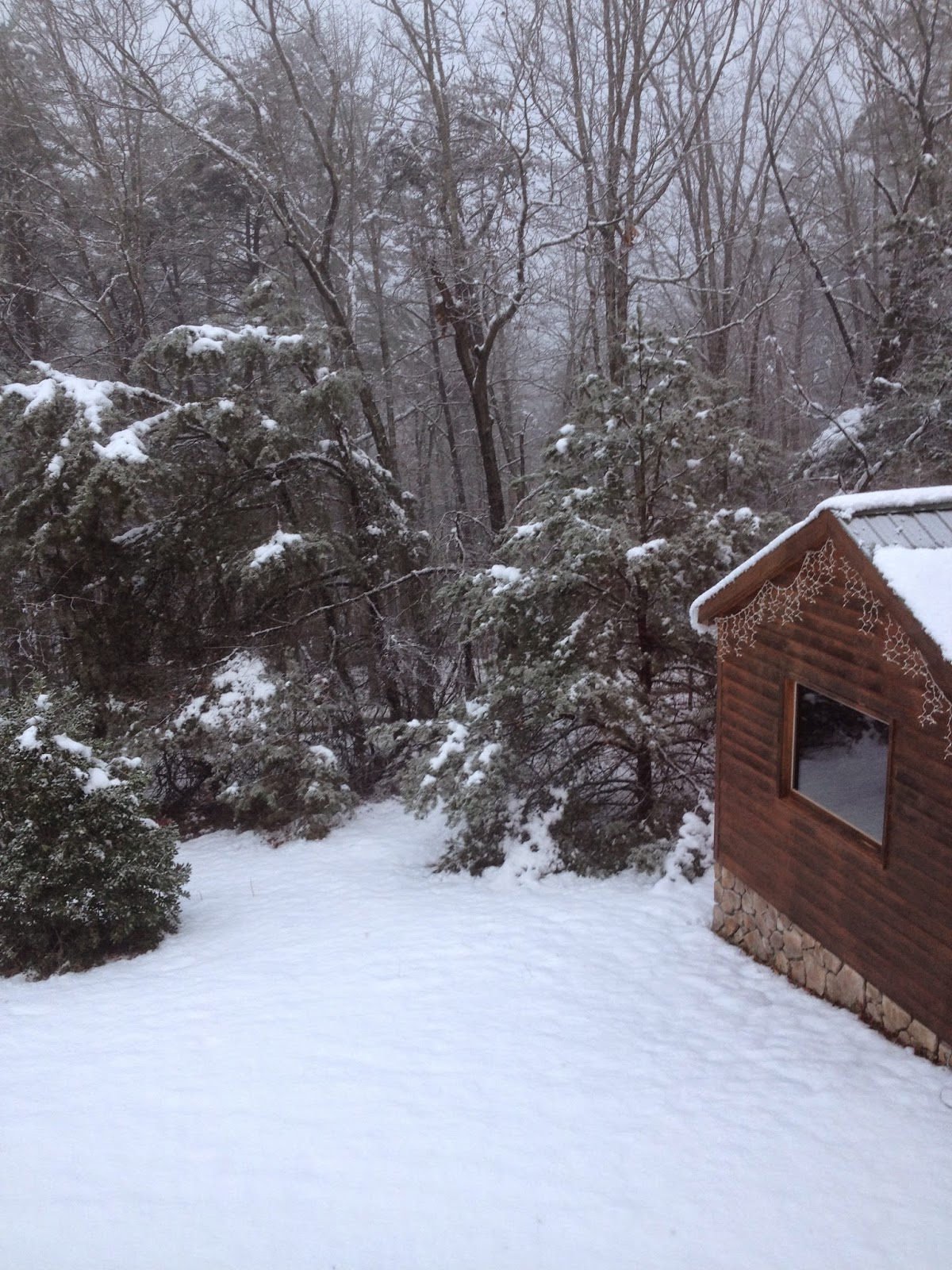 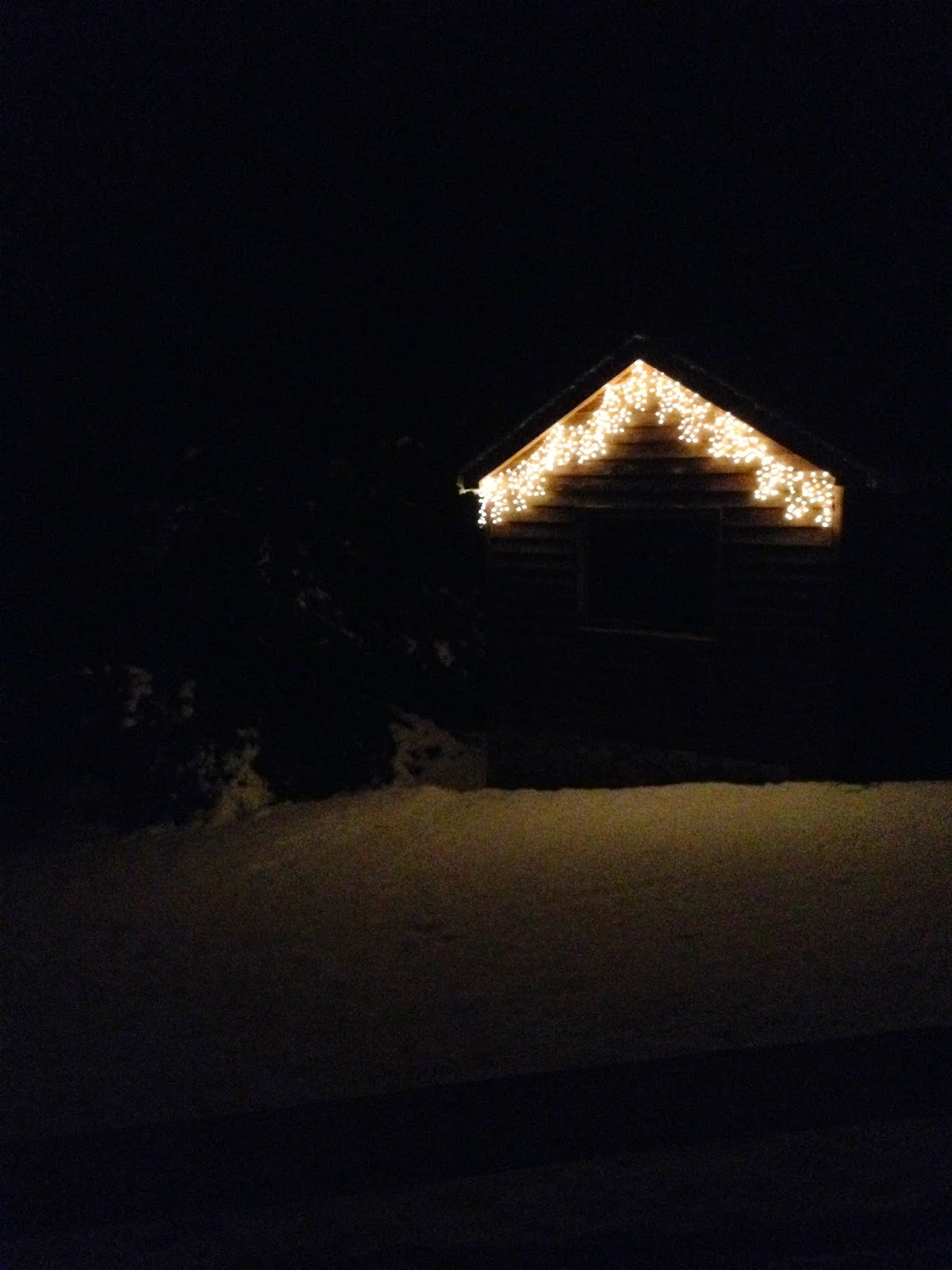 But no snowstorms in our mountains just yet.

In past years, I have always lugged the tree from the Swoope Fire Department lot to the car and stuffed it in.  This year, my regular travels took me in a different direction past a lot of alluring frasier firs.  I chose the most beautiful one of course and Bubba, an aptly named large hearty fellow, hoisted it on top of the car and tied it down. I had no idea the tree was so heavy!  I was able to drag it into the cabin fairly easily, but once inside, the wrestling match began. 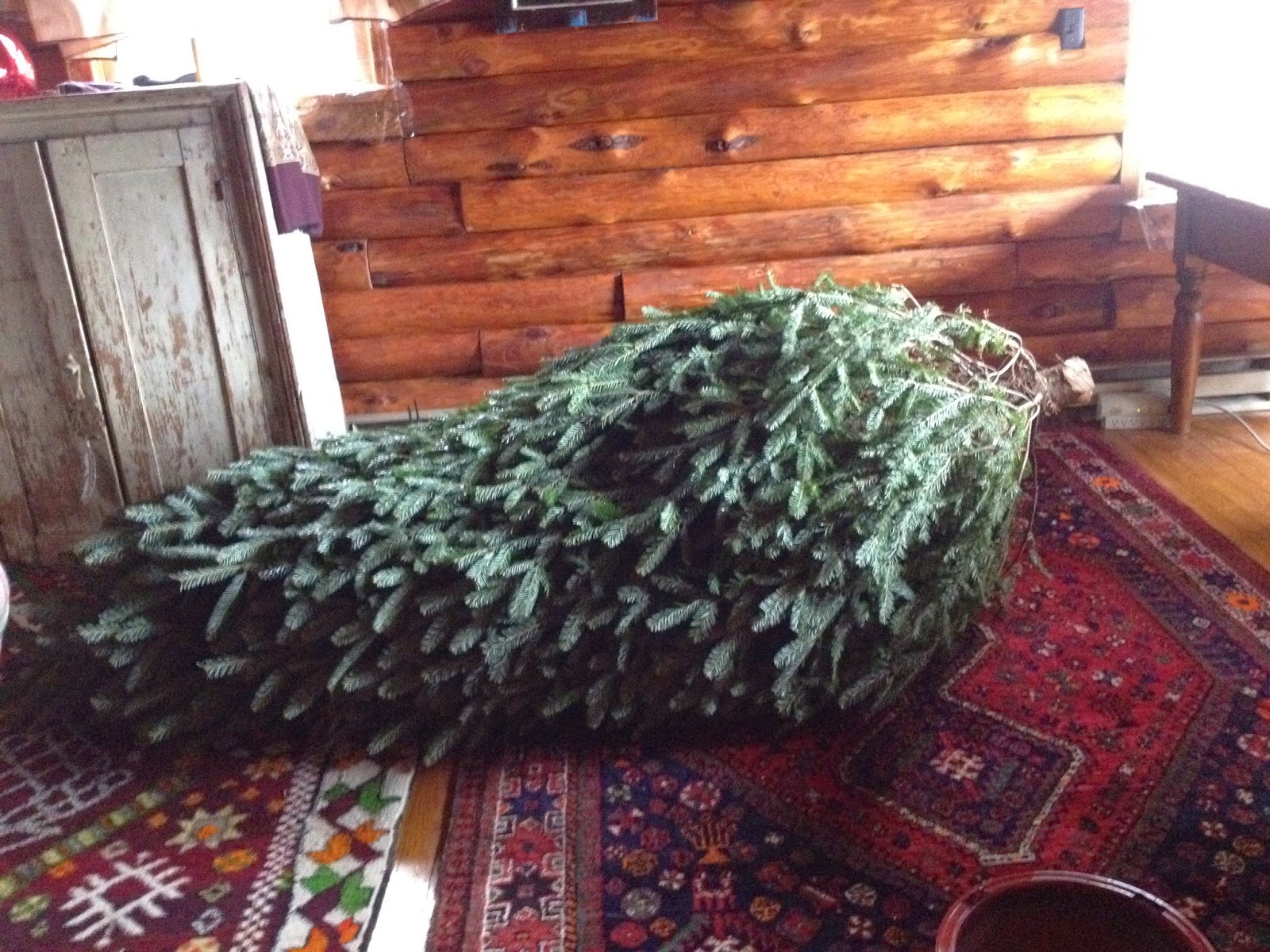 After a couple hours of sliding backward across the floor, getting the tree stand jammed into the radiator and getting pinned under the tree a couple times, I decided that perhaps if I drank some bourbon I would begin to feel stronger and then be stronger.  I needed to brush up on my eggnog recipe before Christmas entertaining anyway. 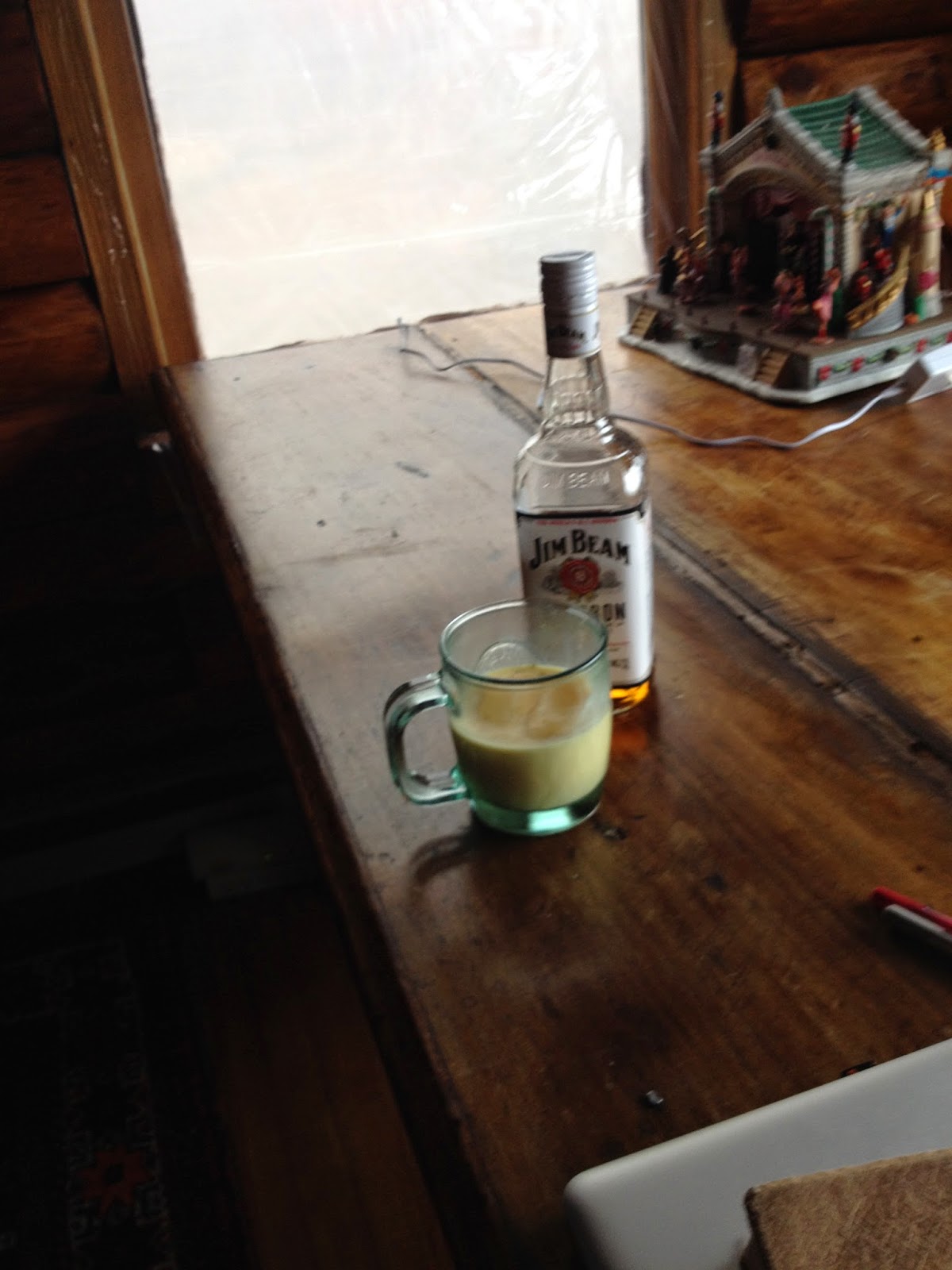 It didn't work, but I began to truly respect the power of the tree and its beauty lying prostate on the floor.

The next day I called my neighbor for help.  He was likewise astonished at just how heavy the tree was.  He did note that it would help matters if I had a post-1963 tree stand as one of the rusted green aluminum legs was now bent and the others would not stay in place. It was an odd piece of engineering forty years ago. I was pretty intent on getting this tree up and decorated and he looked at me rather sadly when I suggested flimsy solutions like placing popsicle stick shims under the wobbly legs.  As a temporary measure, we tied the tree to the cabin.

He told me to call him when I purchased a sturdier stand and we would ring the bell for Round Three. 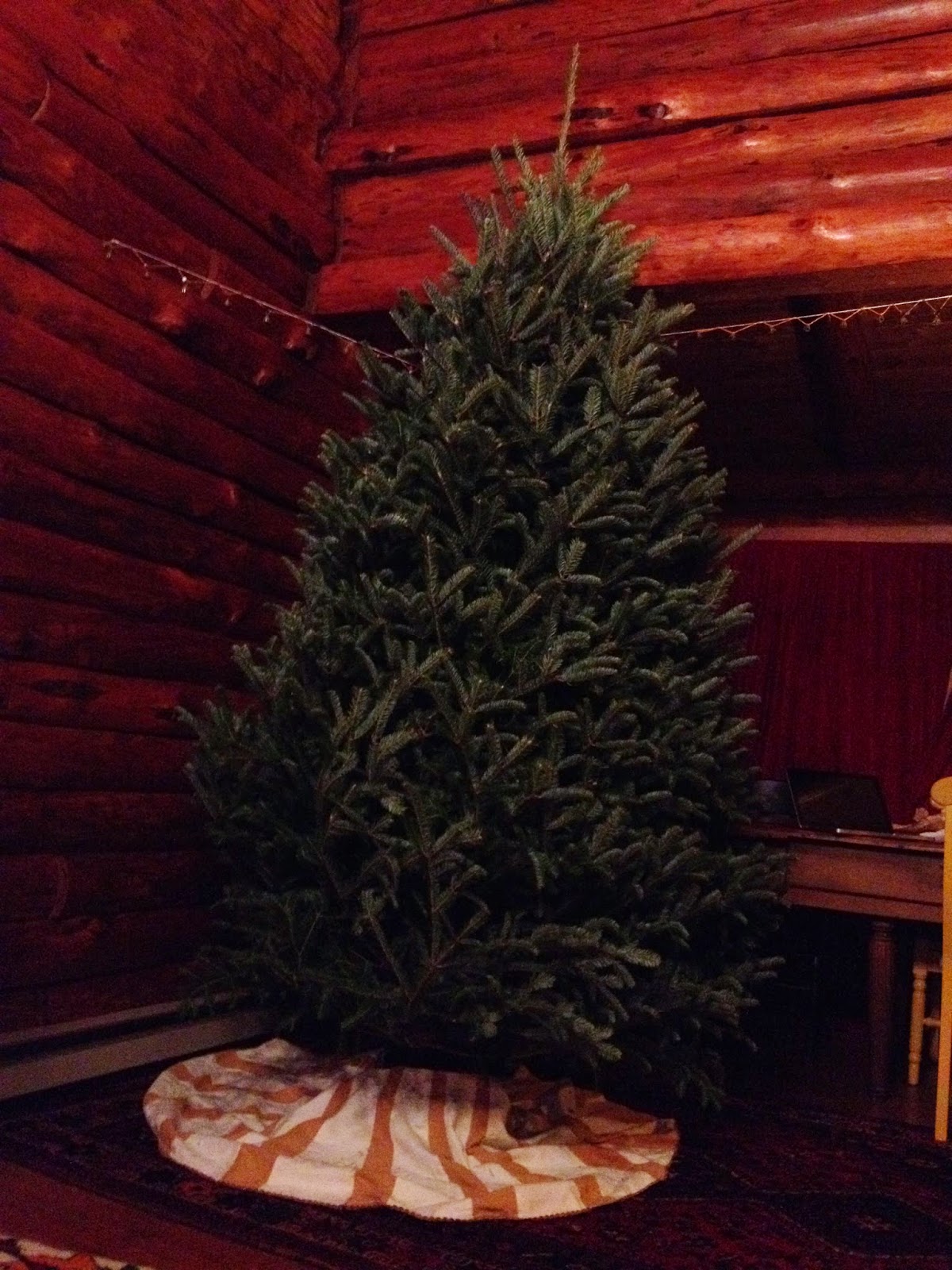 I decided to put bells on the ropes and shims under the stand legs and just call it permanent. 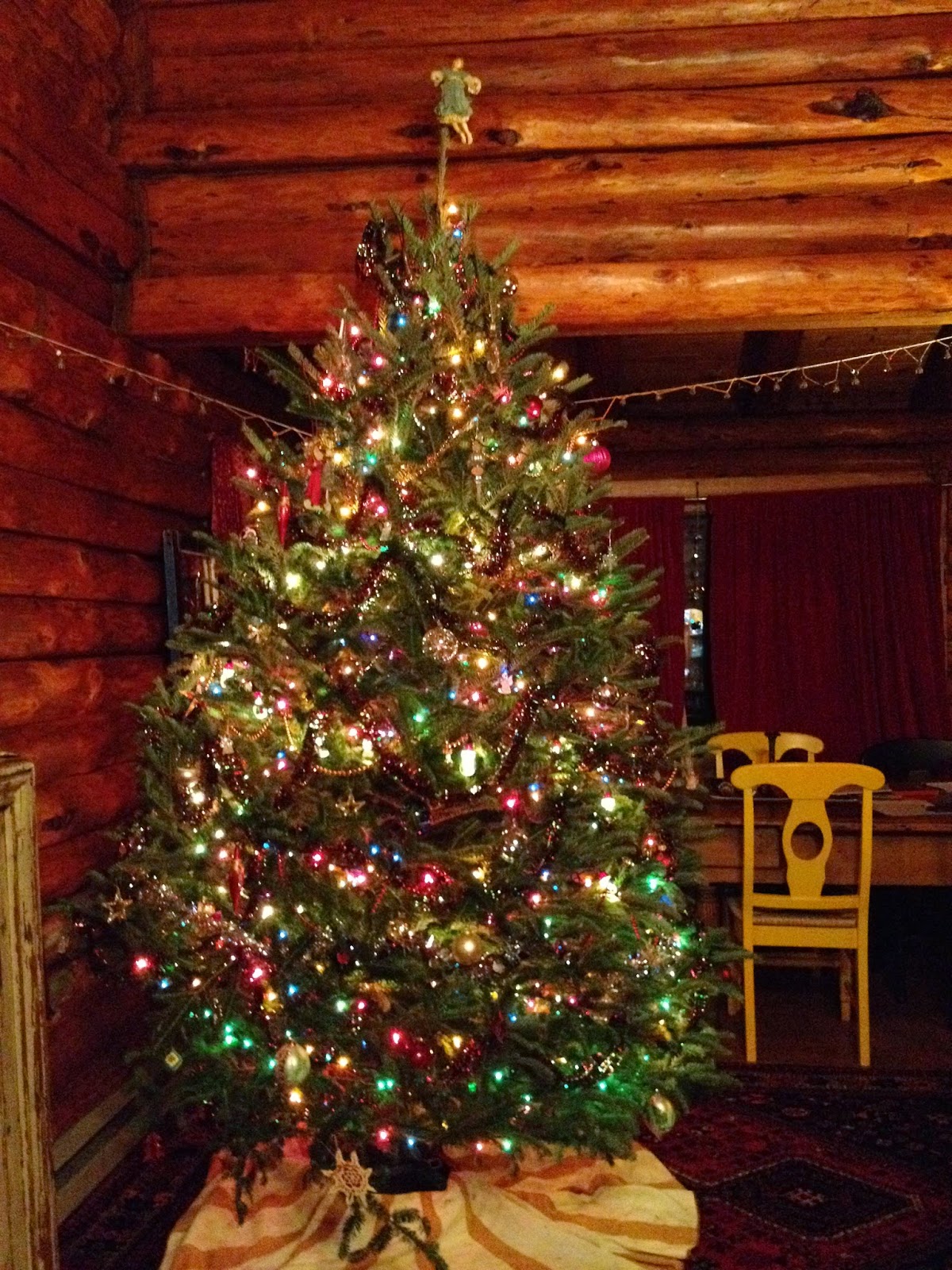 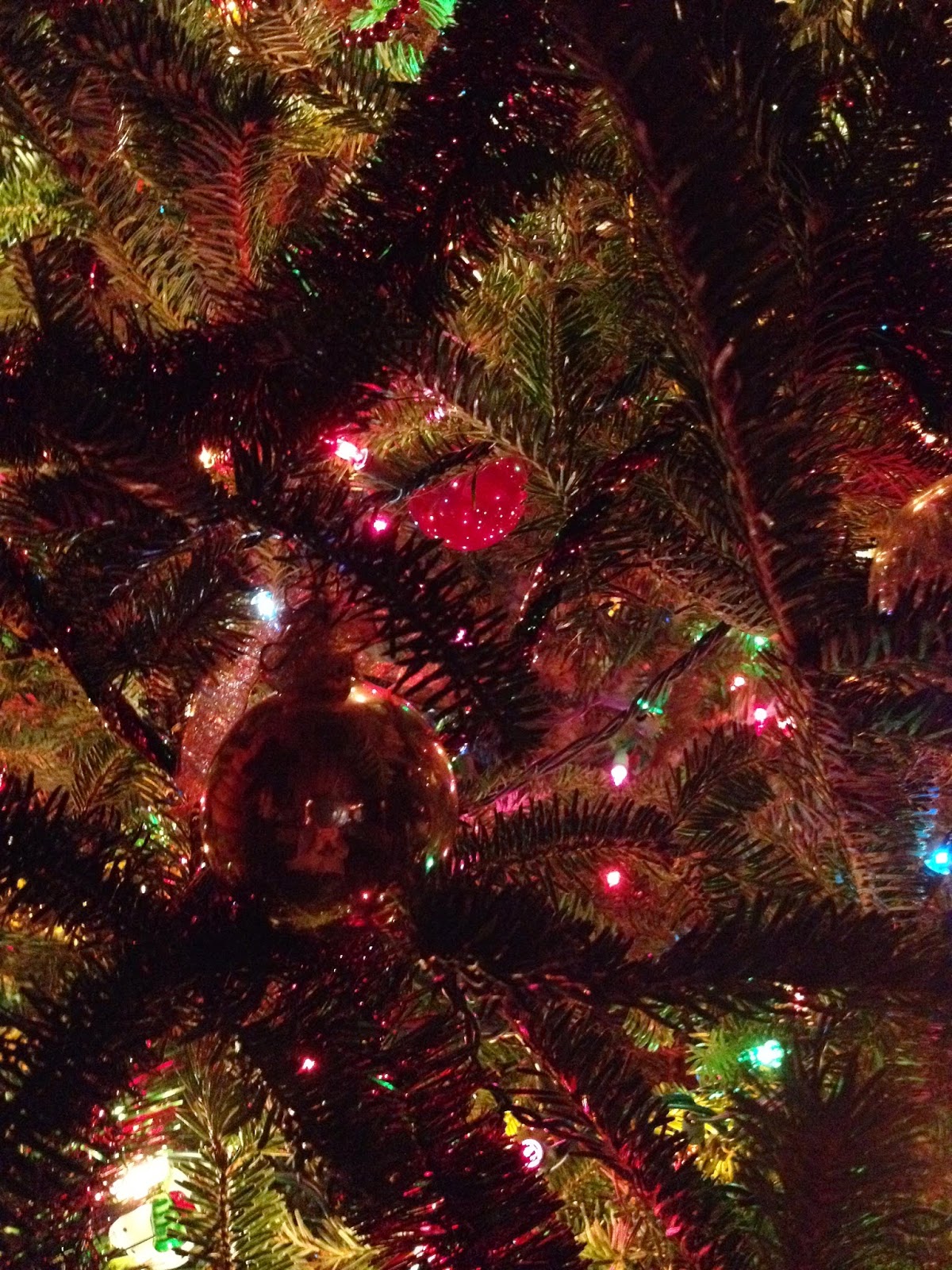 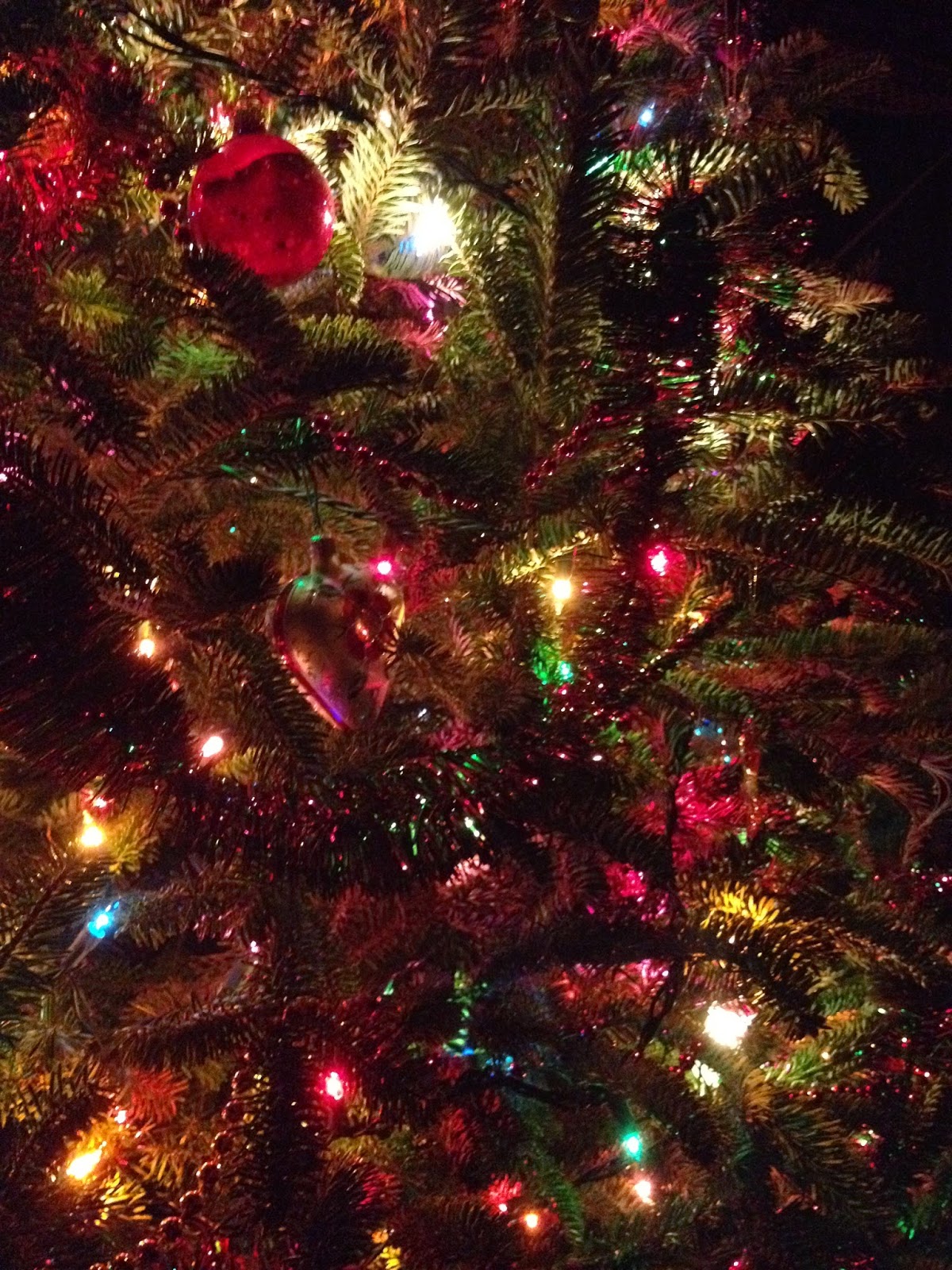 While we were sleeping... 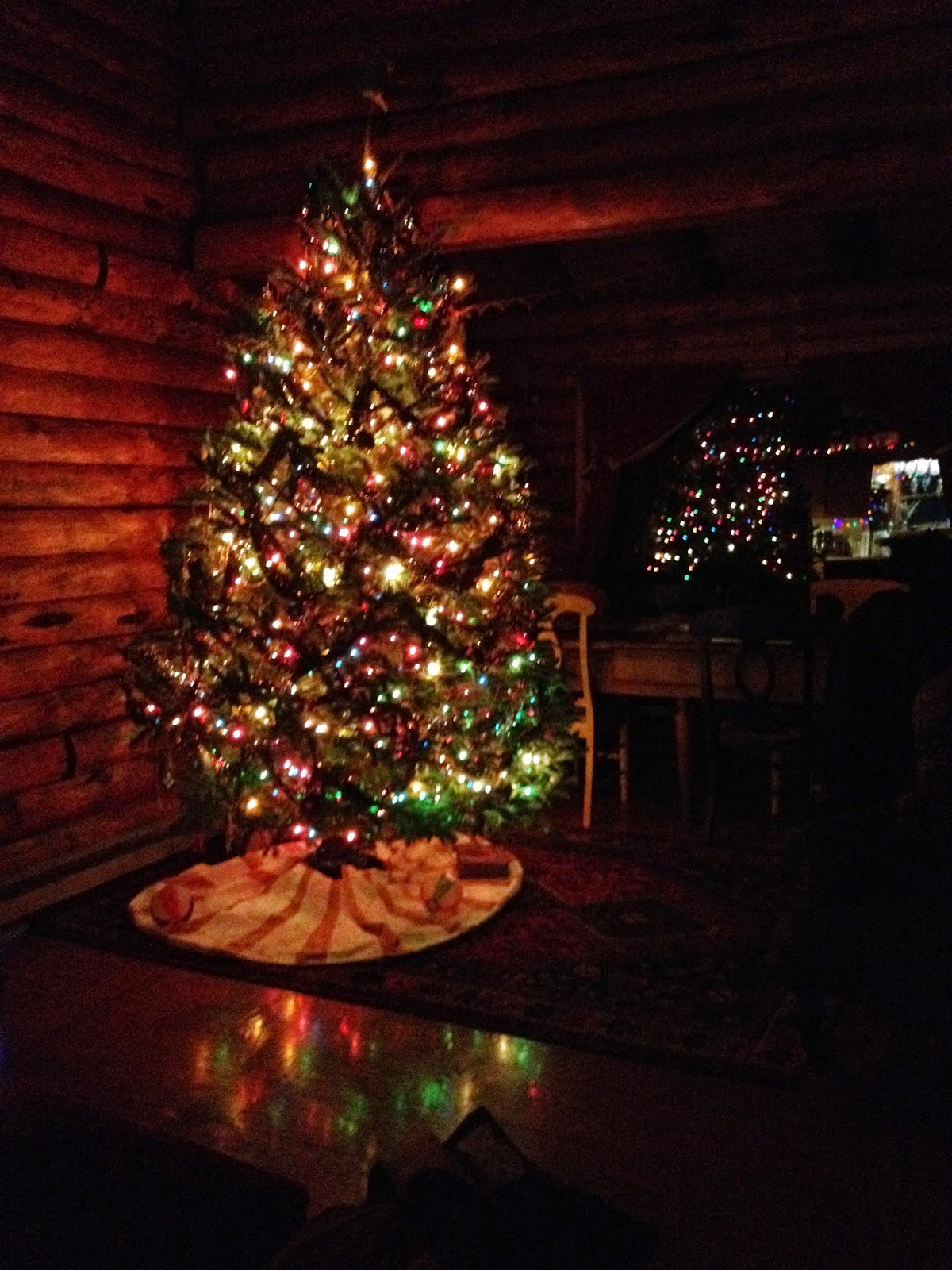 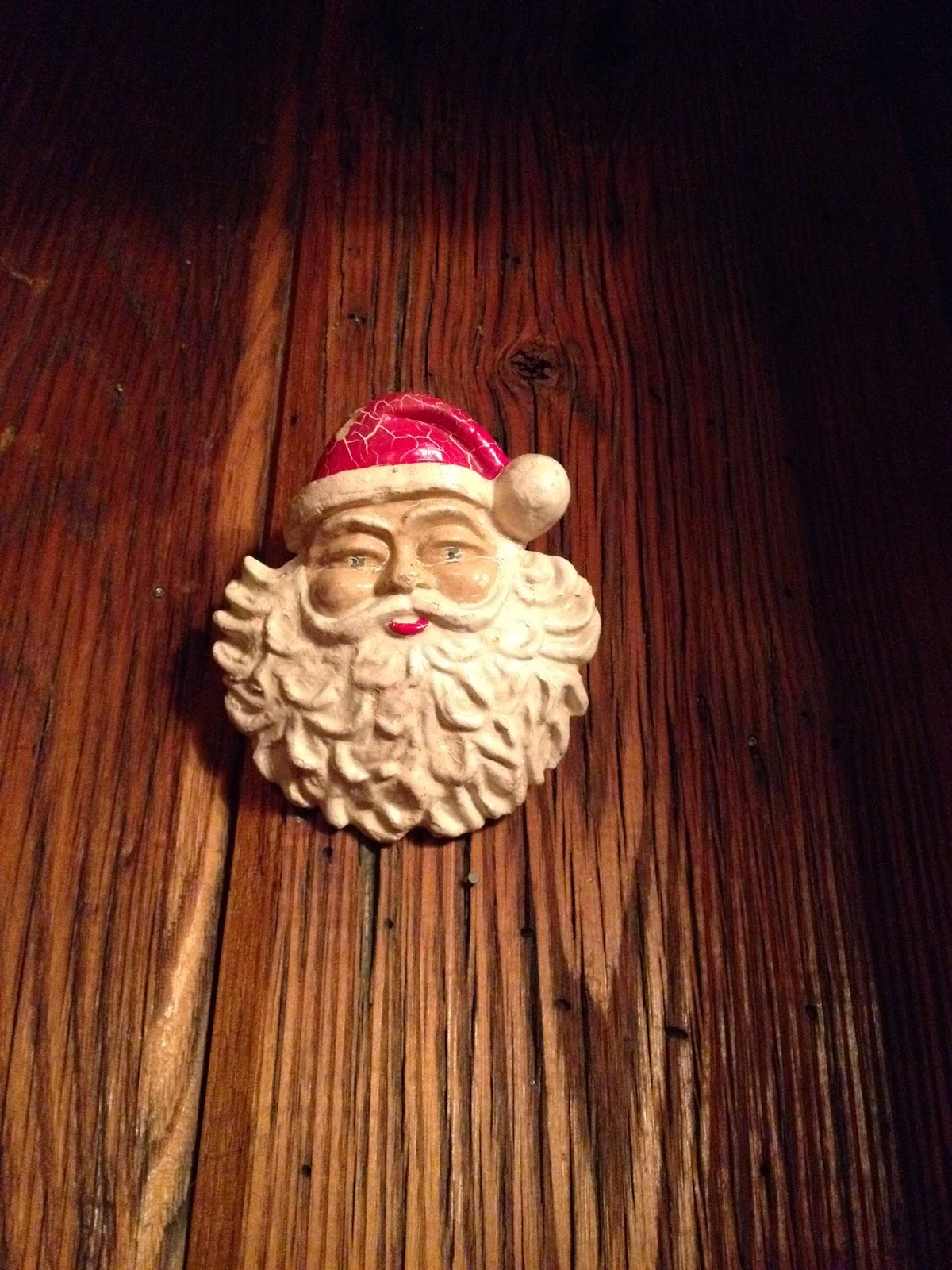 A cause for celebration! 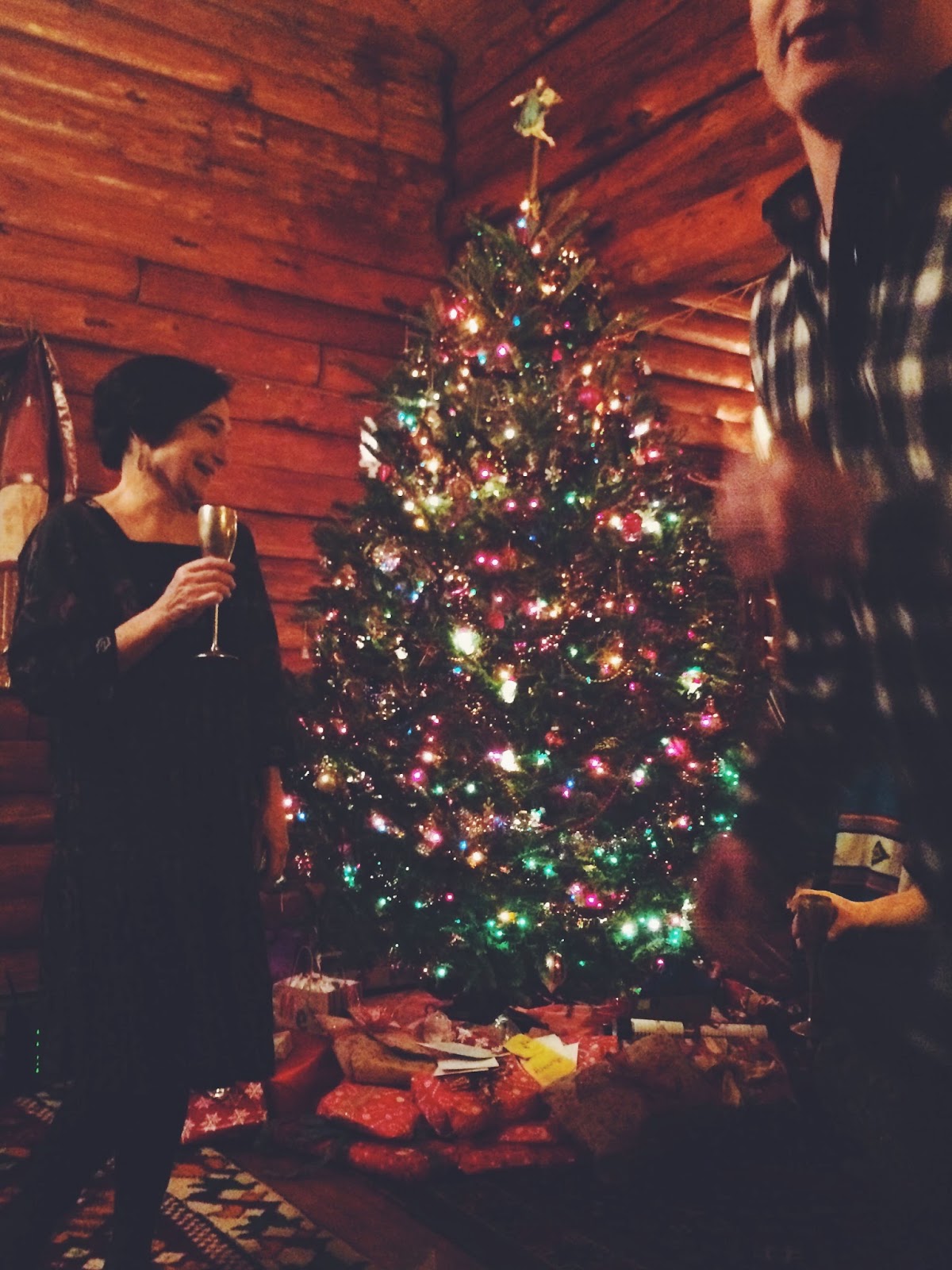 A week of eating ridiculous amounts of food, mostly cookies and chocolate, which of course required copious amounts of red wine to properly cut the cholesterol, between the crazy rich whiskey concoctions, was followed by a new years' celebration complete with a bonfire, dangerous fireworks, and twenty college students merrily piled on top of each other in the tiny cabin. 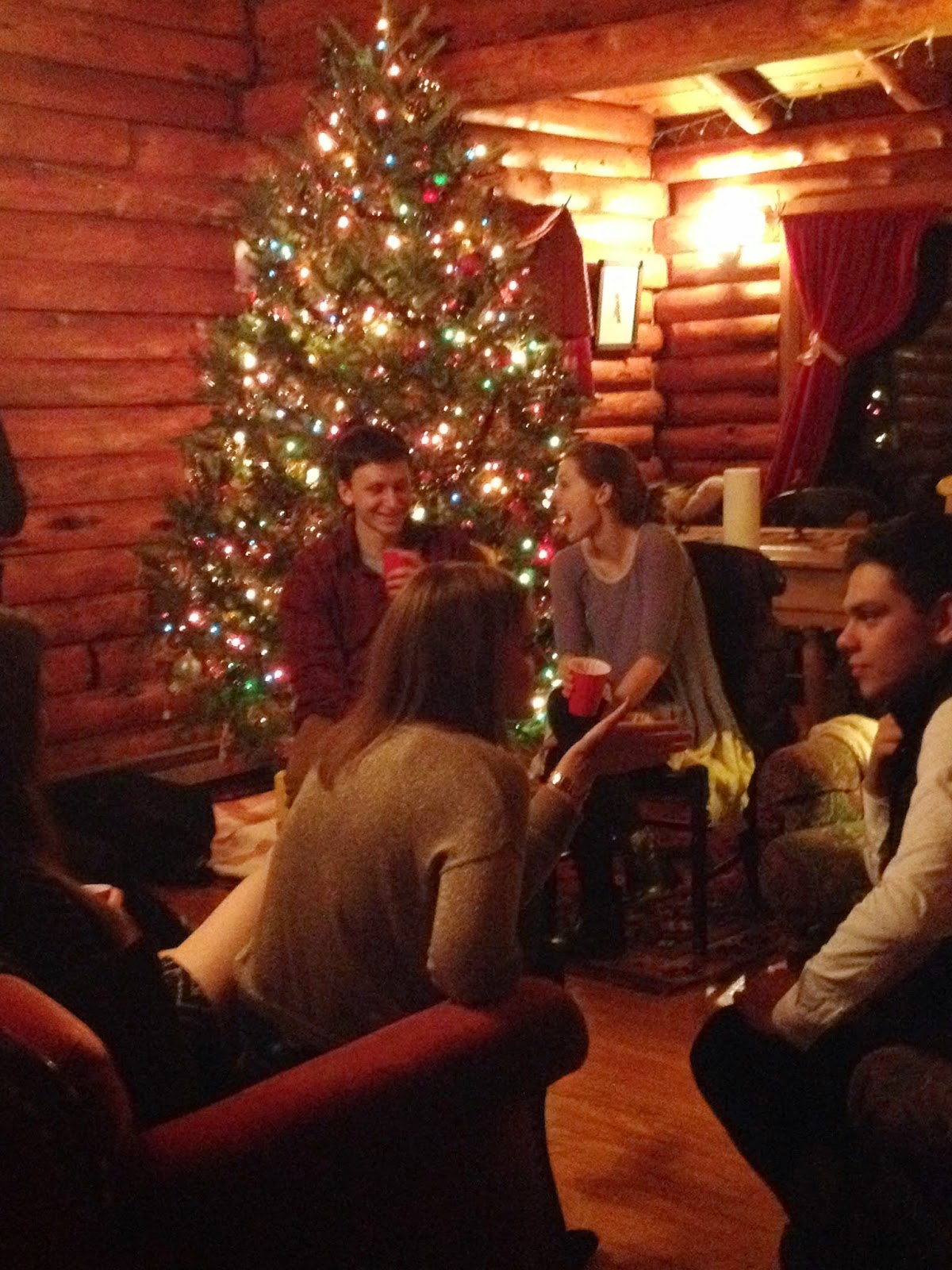 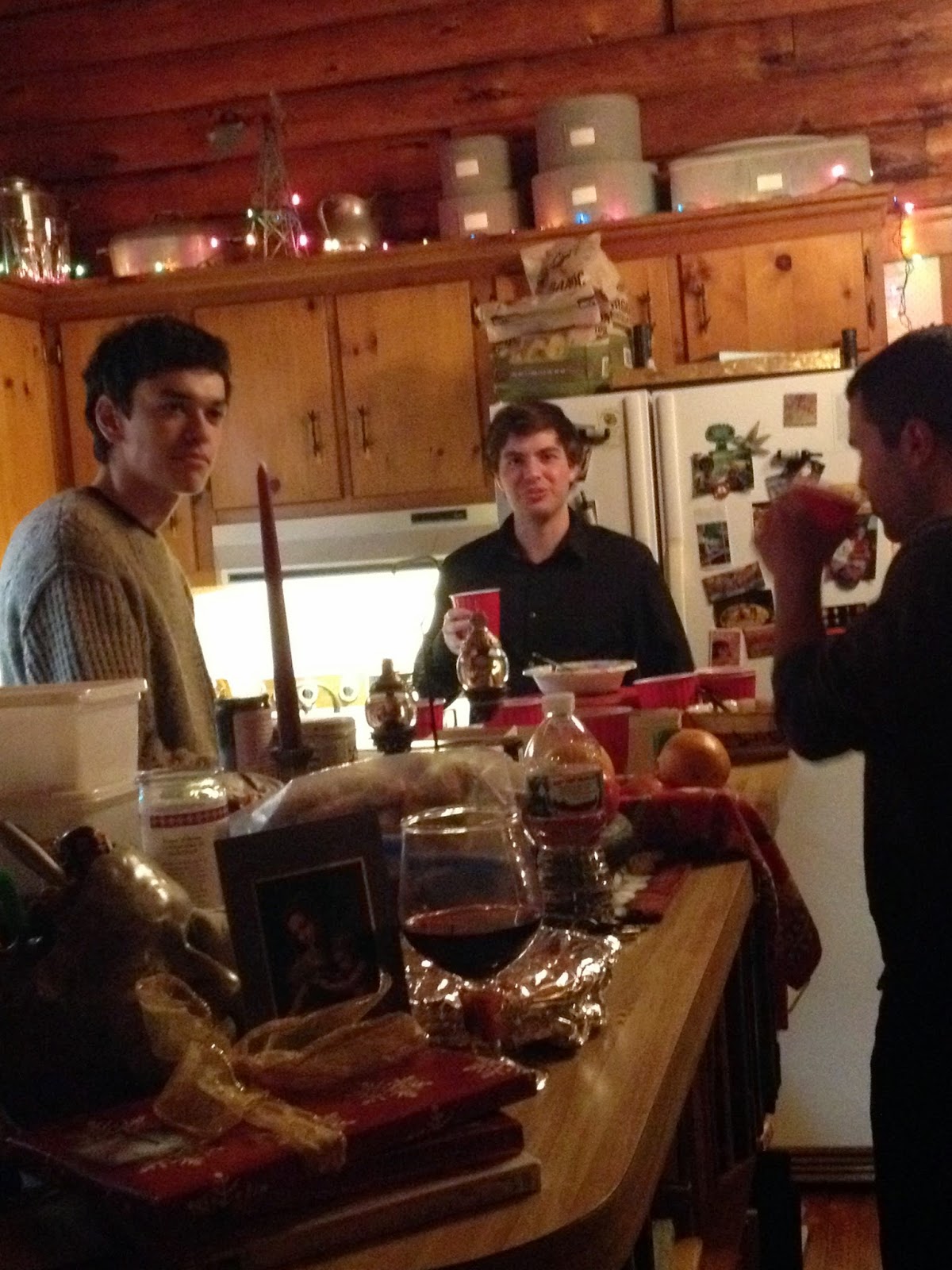 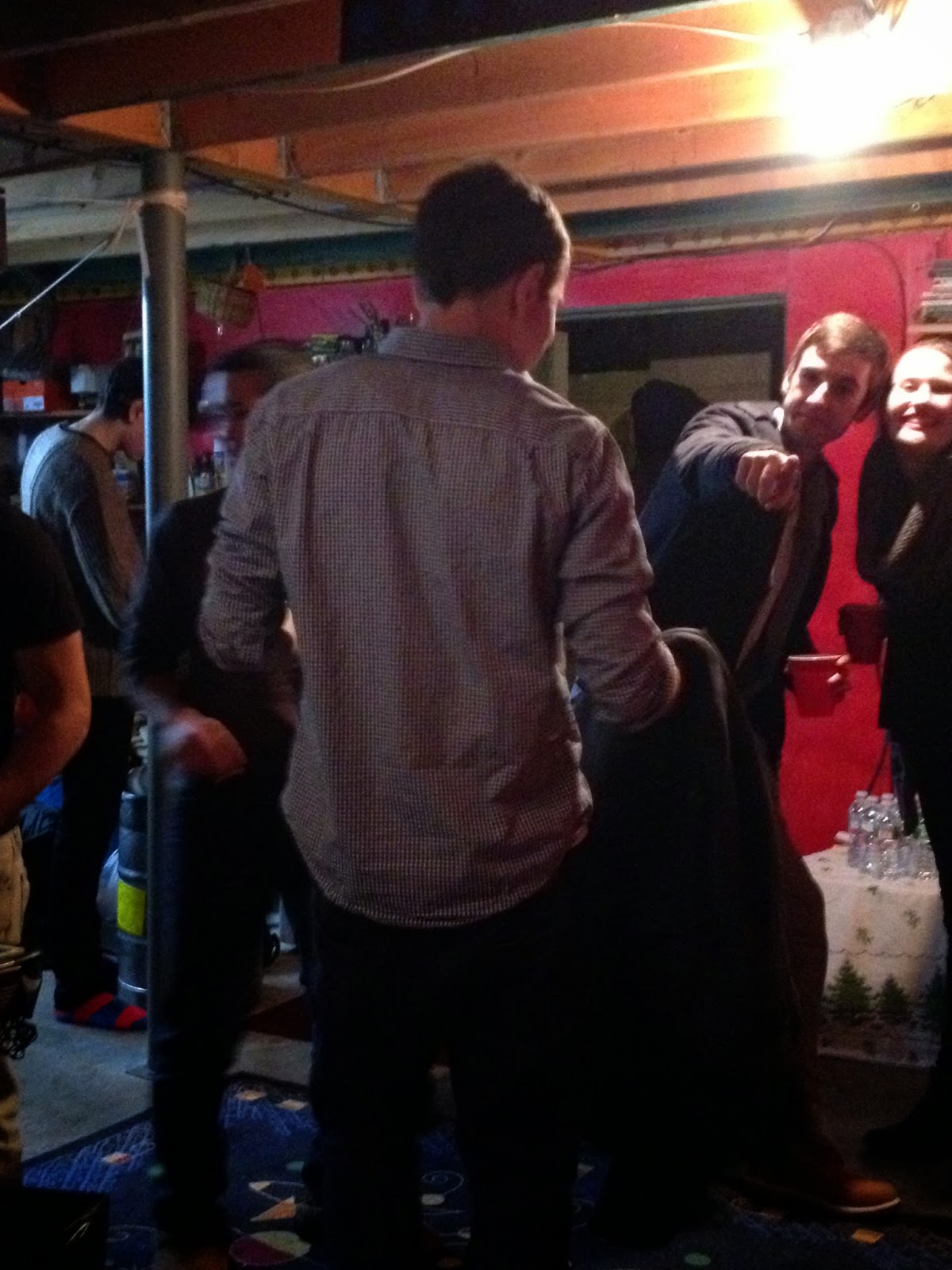 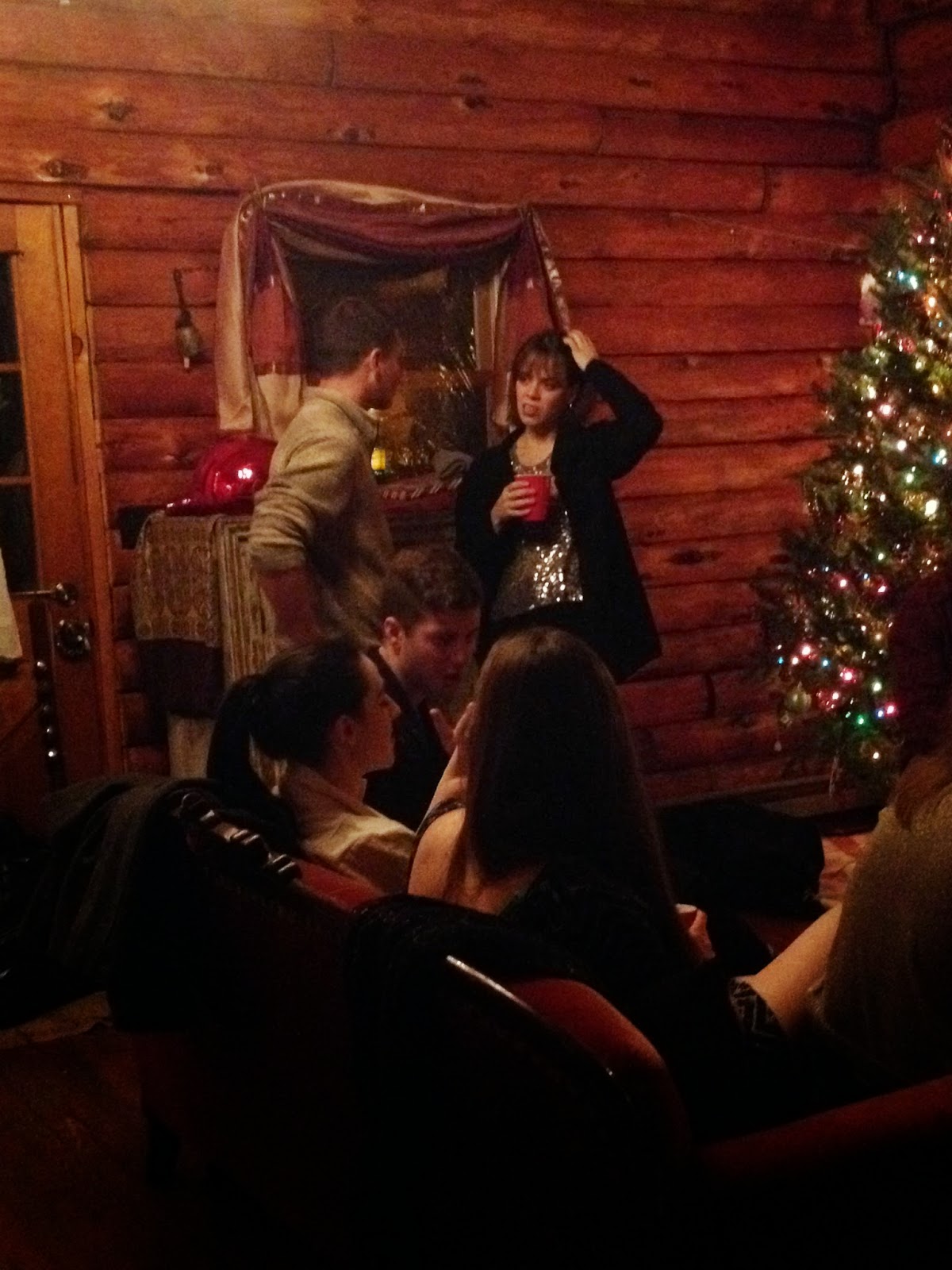 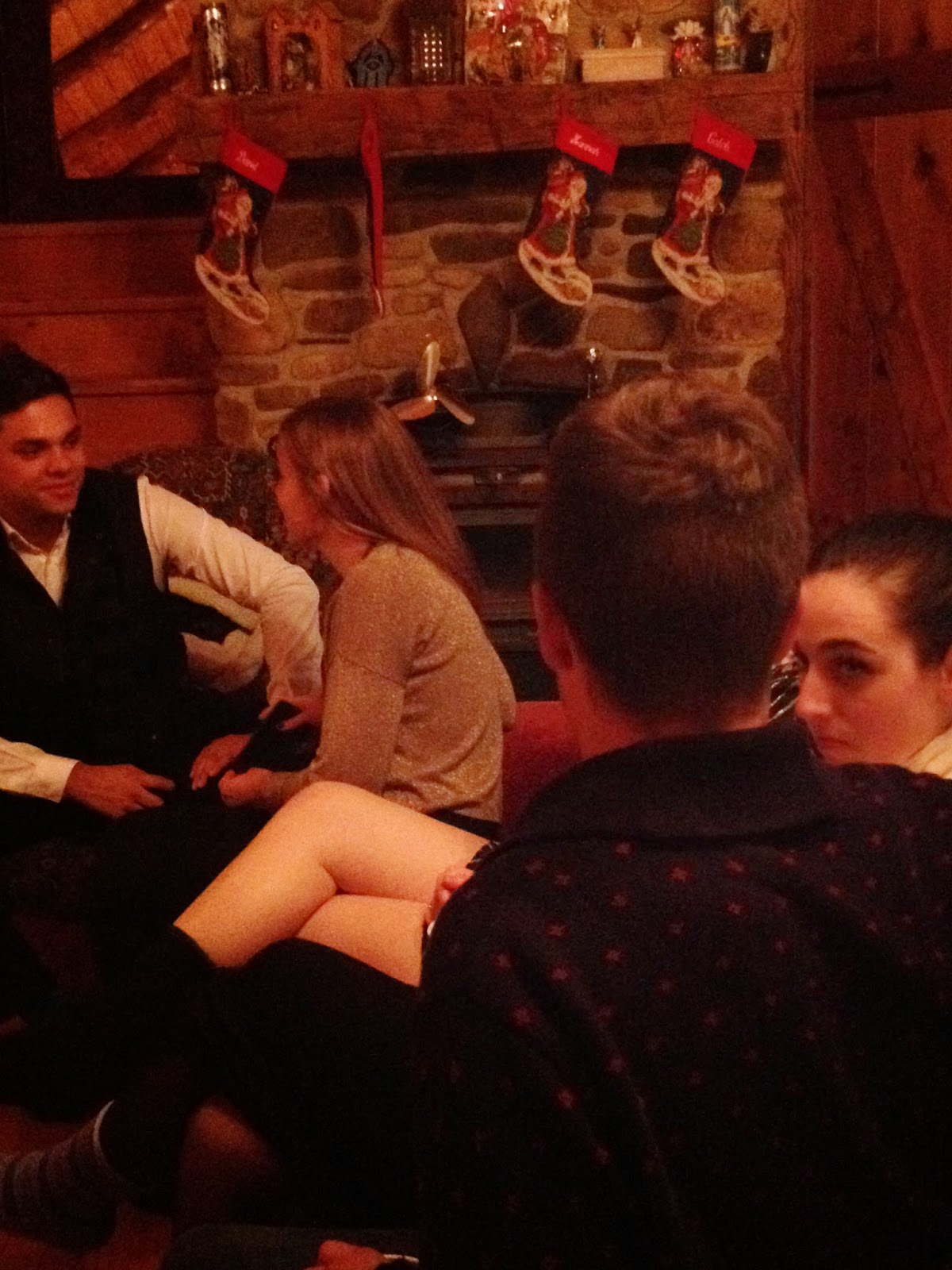 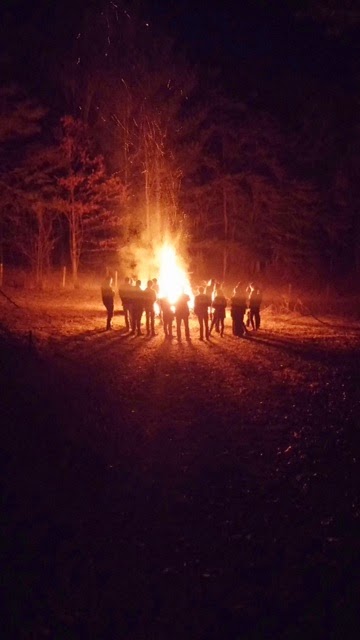