Dreaming with Tom and Huck 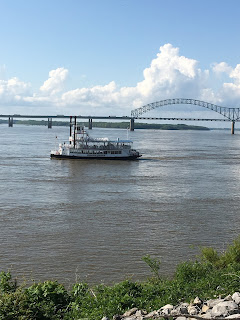 I met Oliver along the banks of the Mississippi.  I found an escape through the long side of the Blues Tent at the Memphis in May music festival.  Memphis didn't really go out of its way to accommodate visitors.  It had poured and poured down rain the afternoon the music was slated to begin.  The wind blew hard and trees were felled, storm drains were clogged with sticks and leaves and all of the debris of a city without the funds for street cleaning.  The relatively narrow dirt corridor afforded pedestrians to migrate from one music venue to the next was a slurpy mound of mud on Friday and a bumpy mess with too much traffic to suitably bake in the blazing sun Saturday.  In another city, the mud would have at least been smoothed down for easier walking and perhaps a chance to dry before the venue was re-opened, but Memphis just let the pedestrians deal, crammed together, sloshing beer as we slipped through the mud.  It was noisy and reeked of portojohns.  So it was refreshing to find a quiet bank, discovered by only a few, with a fresh breeze.

A handsome young man with green eyes in his mid-twenties, lying on the bank next to me, struck up a conversation.  In no time flat, we were fantasizing together about the old man and the young boy on a raft near the shore, inventing an adventure story of Huck and Old Jim and of course, about to round the large lazy bend, Tom. Laughing, the young man told me he had just returned from backpacking across Europe where he searched for other literary heroes, most notably, traversing Spain in search of Don Quixote.

It was then I realized he looked exactly like Oliver.  Our eyes locked and he smiled knowingly.  He got up then and stretched.  "It was nice finally meeting you ma'am," he said.  "I'll catch you in the go-rounds."  And he strode away.