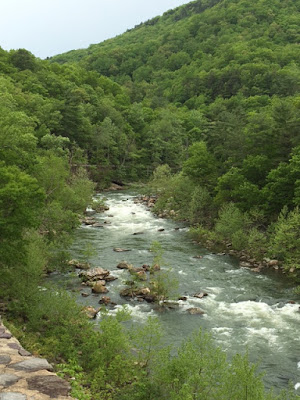 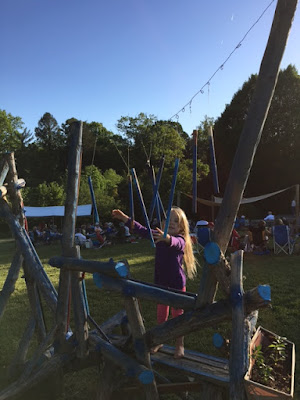 A Friday evening at Boxerwood Narure Center and Woodland Garden in Lexington, Virginia.  A little girl showing standing on a wooden bench performing a wind chime symphony for me while the featured artists played guitar and standup bass behind us to a crowd relaxing in lawn chairs under a tent.  Aimee as there in her Little Cheerful offering culinary delights. 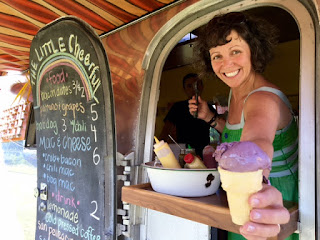 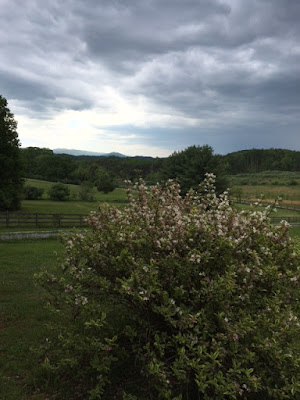 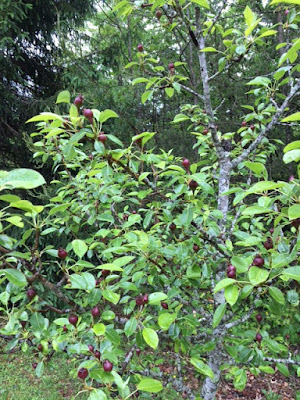 Yay!!! The red Asian pear only bears fruit every third year.  This was also the year the 17-yea cicads came out.  I will post a video here.  The sound was deafening for almost four weeks.  I was a bit alarmed when I saw the first cicada with his bulging red eyes surveying me from my porch rail, but didn't look it up until I woke to what sounded like my neighbor chainsawing down the woods and a hos of ambulances outside my bedroom.  By then end of the day there were hundreds and in the ensuing days, thousands.  They smacked into my face when I walked across the yard.  Their abandoned cocoons were everywhere: sticking on the bottoms of leaves, on the side of the cabin, on the ground.  They sung their crazy song four weeks.  There were inexplicable moments of silence. 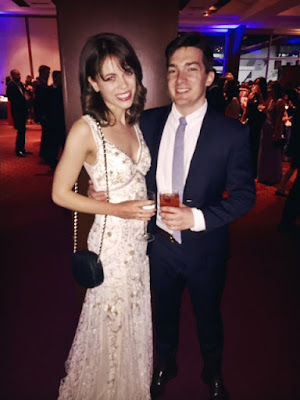 Sean graduated from Barnard.  A lot of hard work...and now she's studying for the Medcat. 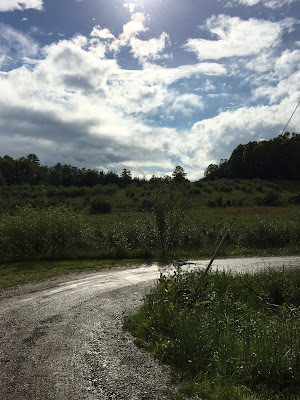 Stumbling down the driveway from my neighbor's to my house.  Project on the plate: bushhogging and excavating autumn olives from the field.  Have to remove the trellises from the vineyard to do so.  Taking down the fence and starting over.  Many hours spent getting quotes and lining up help. 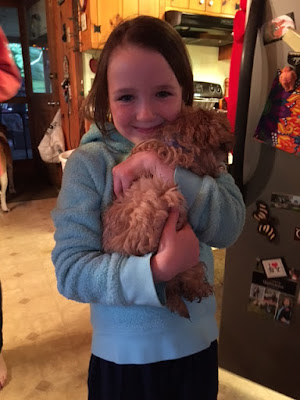 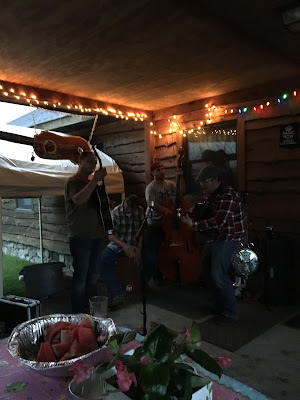 And the Traveling Hillbillies rocking out. 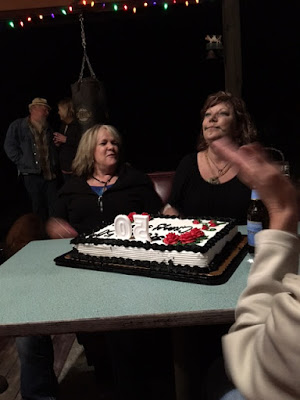 Have you ever seen cake that makes your teeth black?  Well, there was quite a bit of drinking and a few surprises, good music and good company and yes, with very little encouragement, she put her face in the cake. 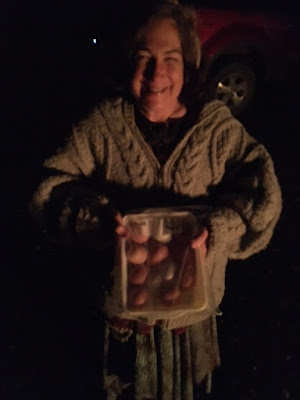 Doing shots of Fireball with the girls even makes a dozen eggs (different colors, a gift from Aimee) seem hilarious. 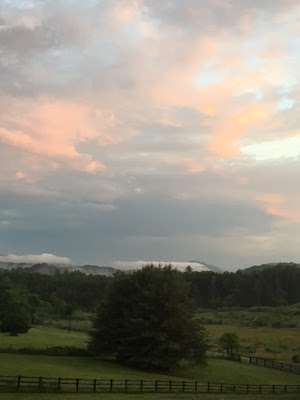 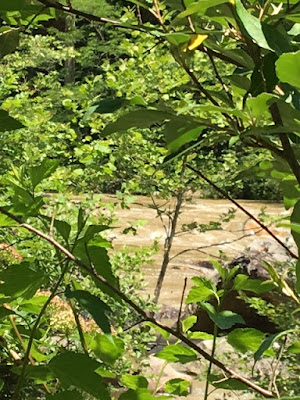 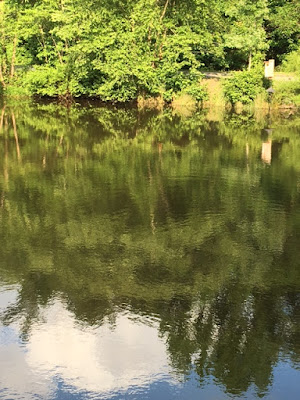 Still spending the week in Richmond.  Many evenings walking in Deep Run Park. 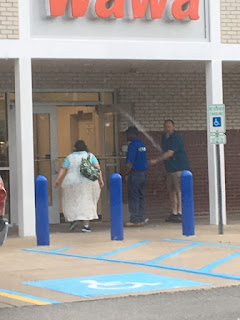 And many mornings getting coffee at the Wawa.  This is actually one of my favorite things to do because it is so multicultural, all kinds of folks on their way to work.  I was sitting in my car drinking coffee with the windows down when this lady startled me by poking her head in the car to say good morning. 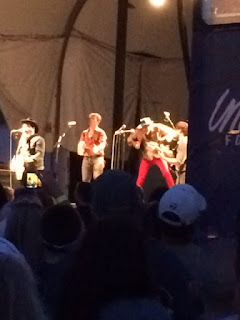 This is actually Daniel Ratecliff and the Night Sweats performing at the Innsbruck Pavilion.  I had seen them not long before at Memphis in May and was looking forward to the performance.  I stopped at Bed Bath & Beyond to buy a flask for my bourbon as mine was at home.  BB&B was pretty much a nightmare.  If you have been to one you know how overwhelming they are with their mountains of stuff.  And then there is everyone in line trying to cajole the cashier into honoring a twenty percent coupon they don't physically have and can't download from their phone.  When I entered the store I asked a large forbidding black girl who reeked attitude if she could help, to which she haughtily replied, "What did I think?" as she pointed to her name tag.  Turns out she had no idea what a whisky flask was, but saved face by asking her compadre who had just appeared.  He seemed highly interested in the quest and took me directly to the place in the store where they used to be.  Undeterred, he sought help and then I had two highly interested sales clerks, impressed with the m.o. of slipping a flat flask on a zipper compartment unlikely to be noticed by the friskers at the pavilion entrance.  The checkout was a coupon hell, with one lady with thirty items insisting on using an electronic coupon she did not have and the other blockaded by a woman with eighteen physical coupons, exceeding the capacity of the checkout software.  Eventually the lady at customer service motioned me to her counter and I got through, already late for the concert.  In the parking lot I poured the bourbon in the flask, loaded up my i.d., money and brand new iphone, when I realized my satchel was soaking and dripping.  I whipped out my iphone and in the extremeness of the moment, realizing the silver flask had a mysterious and close-to-gushing leak, I locked my keys and phone in the car.  Muttering, knowing I was close to my annual lock-out threshhold and still most of the year to go, I went back into Bed Bath and Beyond to exchange the defective flask and call Triple A.  Bed Bath and Beyond was still a clusterfuck with the same two ladies holding up a monstrously long line now and customer service completely blocked by a woman with two full shopping carts who did not seem to be even unloading them, but was chattering about inane stuff I didn't want to hear, like using Roundup on her garden and what a godsend Trump was, not stopping to breathe and I am trying to push past her to at least set my dripping stuff down on a small space of counter if I could clear one.  Finally, she acknowledged me shoving her with a surprised, "Oh, you can't get past me, can you?" I squeezed past her and hailed the heavy set girl with the mustache who was doing nothing but shadowing the other cashier, explained my problems and asked if she could get me the number for Triple A, which, I mean she couldn't even shave her fucking mustache, so of course she couldn't figure any possible way to obtain that phone number without the assistance of one of the mangers, both of whom were quite tied up with the coupon ladies.  I'll just stop here with this one image: me standing there at the counter of Bed Bath and Beyond pouring bourbon from the flask back into the bottle I thankfully still had in my hand, taking an occasional shot and then, me muttering how the slope at Innsbruck is excavated the opposite way a concert venue should be so that no more than the very front of the audience and exceptionally tall people, of which there were an inordinate amount that night, could possibly see the stage and slamming down the bourbon.  The trumpet player wore red glasses like Arturo Sandovel.  Or were they orange?