Canyonlands is one of my favorite national parks, though I can’t explain why. It’s just a vibe. 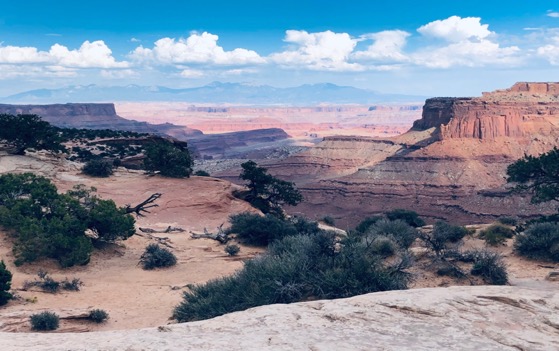 I’d been to Canyonlands before, but only to the most accessible section, Island in the Sky, which is where I would stop again on this trip.  The park contains nearly 400,000 acres, much of it accessible only via backpacking, technical four-wheel driving or boating. It has hundreds of miles of hiking trails among fantastical rock formations: buttes, fins, spires and canyons. The Green and Colorado Rivers segment the park into three districts, not counting the rivers themselves: Island in the Sky, Needles and The Maze, accessible at different points with long drives between. I would very much like to take a river backpacking trip. Boat launches are all outside the park and if you are not confident in your own abilities, you can hire a guide. The whitewater rafting down the Cascades below the confluence of the Green and Colorado Rivers is notoriously challenging and exciting. I don’t have that many years left and would prefer not to abbreviate them as there is much I’d like to see, so will content myself with a hike to the confluence, a ten-mile round trip hike from the end of the paved road past The Needles Visitor Center and a flat water trip. I am helpless to describe the dark night skies possible in the high desert. I do not have the vocabulary. A rich, deep black velvet does not begin to touch it. Stars glimmering from billions of years past evoke a vastness in the soul that does not translate into words. A day of silent rafting through the canyons, acutely aware of Earth’s changes over millions of years, followed by a night so close to thousands and thousands of stars that one feels herself drifting through the cosmos, is my idea of a vacation.

The Maze section is the most remote and rugged, and requires a four-wheel drive high clearance vehicle. It is a destination for those interested in tribal pictographs. If that is your interest, you might also consider a hike to Horseshoe Canyon, a detached unit of Canyonlands just north of The Maze, with the caveat that it is considered by some to be the one of the most dangerous hikes in the country. Horseshoe Canyon is a six to seven hour, 7 ½ mile round trip hike into the heart of the desert. Pictographs there date from between 2,000 and 8,000 years ago.

Island in the Sky and Arches National Park are in close proximity and many travelers will visit them both on the same trip. Canyonlands reports only a half million visitors annually (with The Maze reporting only around 2,000), while Arches is currently struggling with one and a half million visitors a year, having to stage entries for the long line of vehicles daily. For a mid-afternoon visit, I prefer Canyonlands as it is less crowded and doesn’t feel as scorching hot, perhaps because you are not idling in your vehicle sucking in exhaust fumes. These are however only my perceptions. In between the two national parks lies Dead Horse Point State Park. I’ve camped there before and would like to have again on this trip. But the campgrounds were full. There is a super cool five-mile canyon trail rimming a bend in the Colorado there that I plan to hike someday. Not this trip though. I was in a bit of a fog. Island in the Sky has paved scenic drives totaling around 17 miles to Upheaval Dome, Green River Overlook and Grand View Point Overlook with many magnificent overlooks and vistas along the way. There are several trailheads along it which one can take for wilderness camping, with a permit of course or for a short jaunt down and back just to get the feel of wandering in this colorful fairytale land.

There is something weighty about death and I didn’t feel much like hiking. I drove the scenic road, stopping at many of the overlooks and simply gazing out over the canyons.

I had a few more hours of sunlight. A drive through Arches would be perfect. Evening was actually a good time to arrive as long as the sun wouldn't blind me around some of the more treacherous curves. 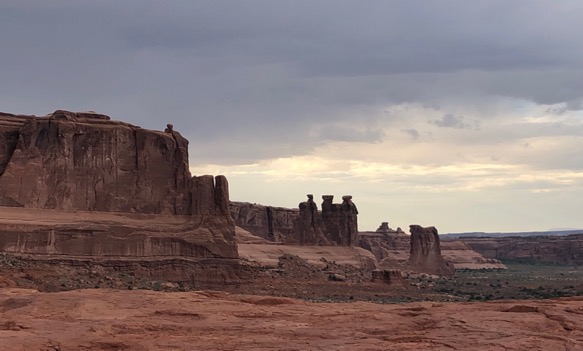 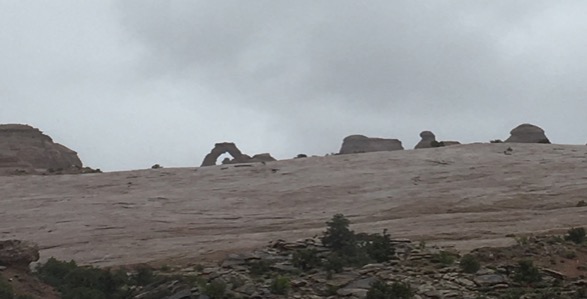 Summer afternoons can see long lines waiting to get in to take the scenic drive. That sort of scene dispels all of the magic for me, so I just avoid it. I am glad that I saw the Old Glory geyser in Yellowstone in May 1976 with two friends, my college roommate and a rodeo rider who’d picked us up hitchhiking. It was wondrous. We were the only ones in the park. With visitation around four million visitors annually now, I probably won’t go back. I get snarly and feel curmudgeon-like when stuck behind an oversized recreational vehicle emitting toxic exhaust fumes, see graffiti etched on the rocks or watch people tromp over the fragile biological soil crust to take a selfie.

Arches are considered a sacred geometry by many, offering a portal from one place to another, to simply another room, a magical place or even a portal through space and time. An archetypal symbol, they draw us unconsciously to a vantage pint of transitioning from one place to another. Arches National Park has one of the world’s densest collections of arches, over 2,000 within its borders, varying from 3 feet wide to 306 feet wide base to base. When deep seas evaporated here, 300 million years ago, a thick deposit of salt was left behind. Over the ensuing millions of years, sediment was deposited on top of the salt bed and compressed, at some places a mile thick. The salt bed being softer and less stable has shifted and buckled under the weight of the debris as well as from upheavals from faults deep in the earth, pushing up domes of rock and pulling down cavities. Different types of rock react differently to erosion, depending upon their density. Most of the arches here are the salmon-colored Entrada sandstone and the buff-colored Navajo sandstone. Torrential downpours, ice, expansion and contraction, and strong winds have all worked to create fissures and further erode the stone to create long ridges or fins. Wind and water erode the stones of the fins to form arches. Eventually the arches break and create spires. And eventually these too fall and wind and water polish smooth the rocks that remain. 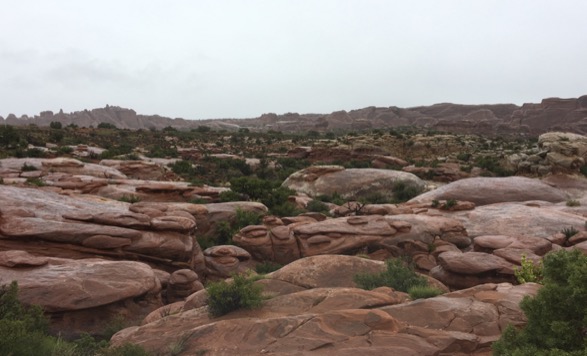 A drive along the paved scenic route will take from 2-3 hours, stopping at each overlook for ten minutes. Self-guided audio tour apps are available. Pick up a brochure at the entrance gate. Hikes at trailheads from parking lots along the road range from an easy ten-minute stroll on the Nature Trail behind the Visitor Center to a three-to five-hour difficult hike to Devil’s Garden and back. Stay on the marked trails. The biological soil crust of the high desert contains much more life than is readily apparent and performs crucial functions from creating a web resistant to water and wind erosion to converting atmospheric nitrogen for uptake by plants. One misplaced footstep can demolish countless years of evolution.

I began driving the scenic road, stopping at a couple overlooks. The sky was becoming dense with storm clouds. Then it started grumbling. This didn’t seem like a very safe place to be during a thunderstorm. 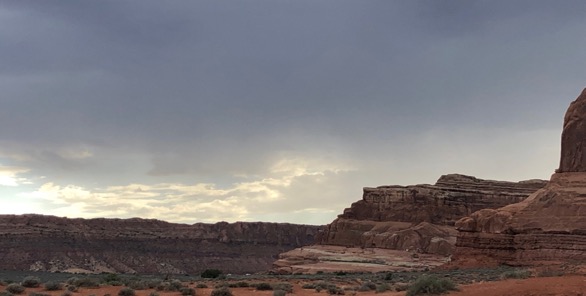 It had been a long day and I still wasn’t sure where I’d bed down. The nearby town, Moab, where most visitors stay has a certain amount of character, at least a couple blocks downtown and for one reason and another, is immensely popular. But I wasn’t in the mood for a crowded tourist town. I just wanted to be awestruck over nature and alone with my thoughts. If I found when I got safely back down the steep incline that the storm was isolated over Arches, I’d scout for a camping spot along the Colorado River. The Bureau of Land Management (BLM) has a number of lovely relatively private sites where the canyon hugs the river and you can play in the water. 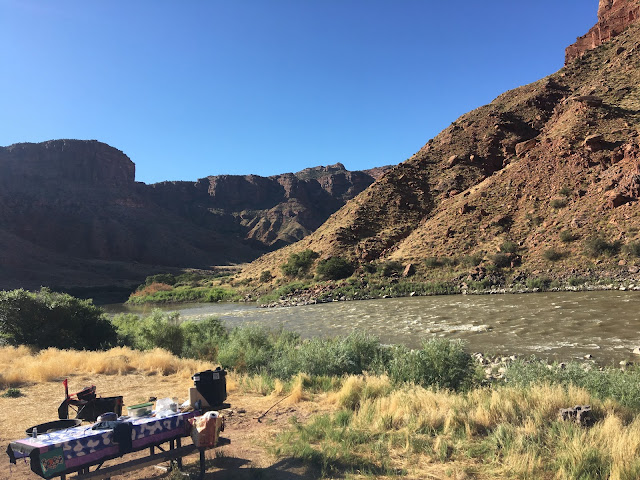