I stood at the rim of Fairyland Loop at Bryce Canyon for a long time after getting the call that my mother had passed. Looking back into time jars the senses into accepting a longer timeline than we are used to thinking in, one that existed before humans and will continue when our race is extinct. My time spent with my mother was brief and now it was over. 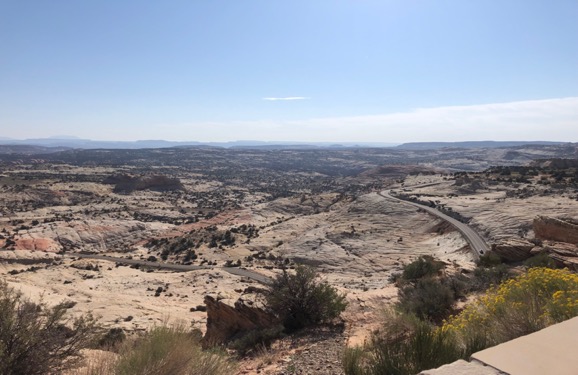 This time I headed to Capitol Reef National Park on Utah Highway 12 with a heavy heart.

Tectonic plate upheaval and wild forces of erosion have created unusual land and rock formations at Capitol Reef National Park. Its defining geologic feature is the Waterpocket Fold, a wrinkle or fold in the Earth’s crust, that extends 100 miles from Thousand Lake Mountain to Lake Powell. The fold is somewhat reminiscent of an ocean’s barrier reef. A huge dome-shaped rock as one enters the park looks like the US Capitol building, hence the name. 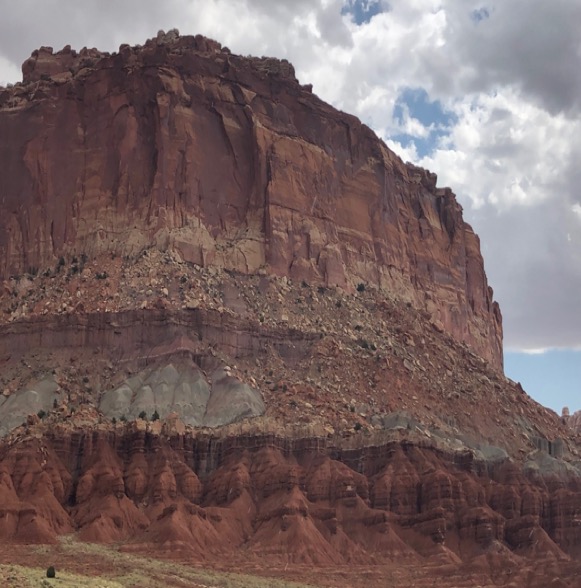 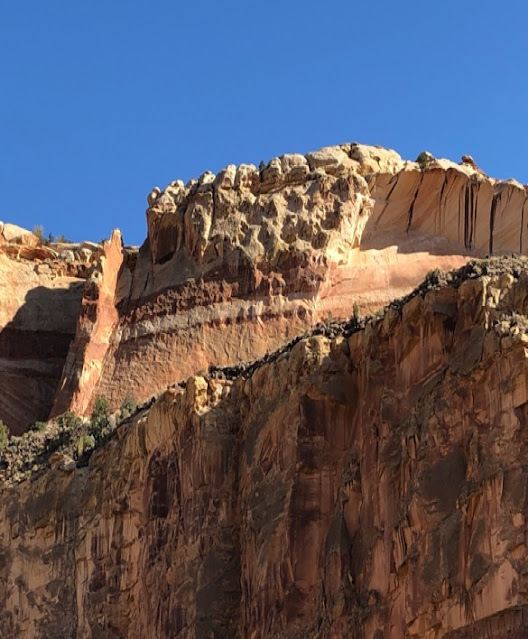 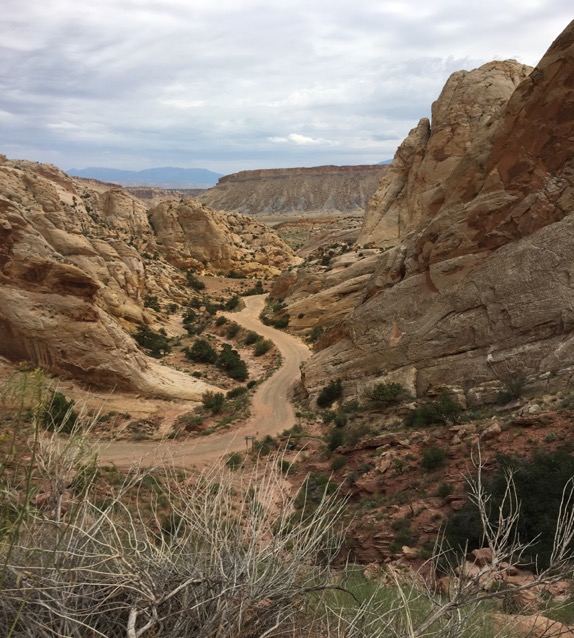 I am especially fond of the Fremont Gorge Overlook Trail, though stay alert as it is easy to wander off the trail and sometimes hikers place misleading cairns at the rim of steep precipices. 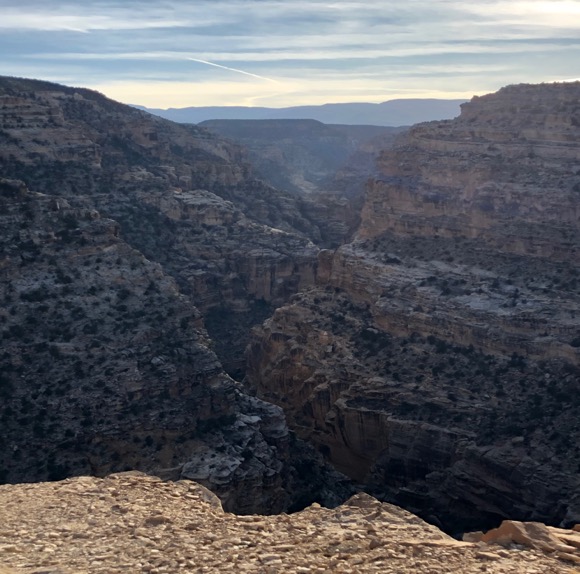 At first blush, much of the terrain can look pretty barren, but a closer look reveals exquisite wildflowers as well as unusual birds flitting about. It is not a large park, yet it contains 33 ecological systems and over 900 species of plants and 239 species of birds. 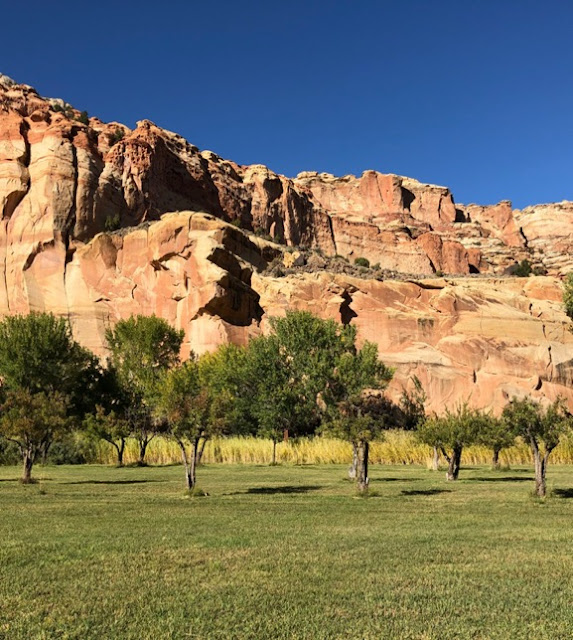 A special treat: the park has its own fruit orchards with cherries, apricots, peaches, plums, and pears for the picking. I picked a couple apples for my journey homeward.

In addition to the orchards planted by Mormon settlers in the 1880s, the park maintains a few structures from the same period within the Fruita Historic District: a schoolhouse, blacksmith house and the Gifford Homestead which offers gift items, pie and ice cream. 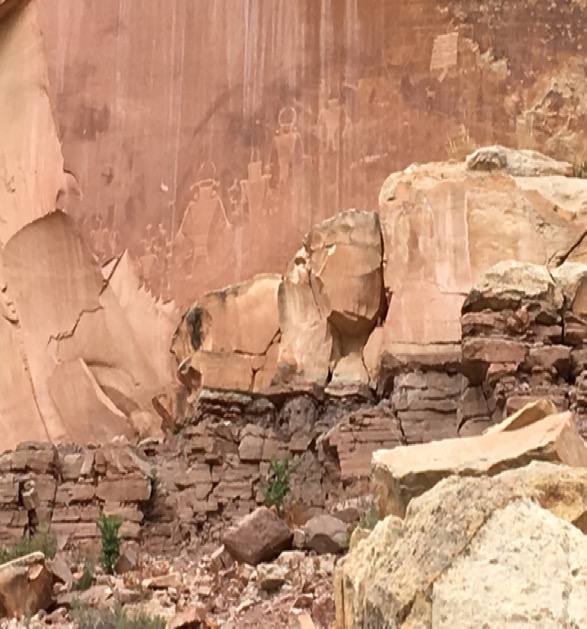 Rock walls expose paintings and carvings made by native Americans 1700 years ago. 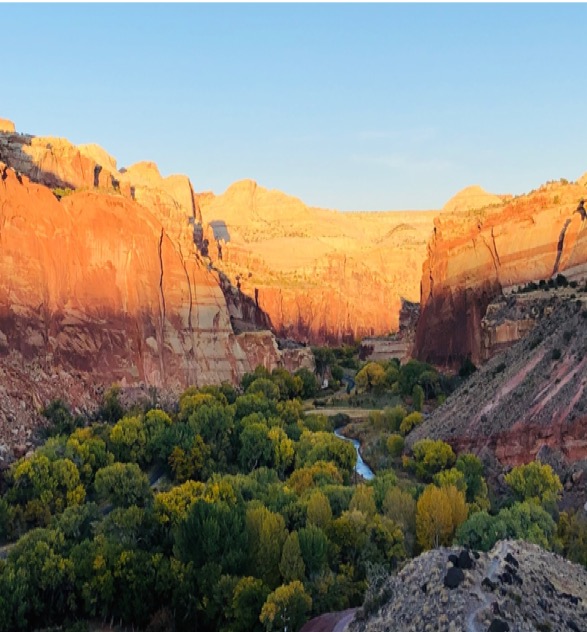 The most magnificent aspect of Capitol Reef though is the way the light glows as the sun drenches the landscape, ever changing and always breathtaking. 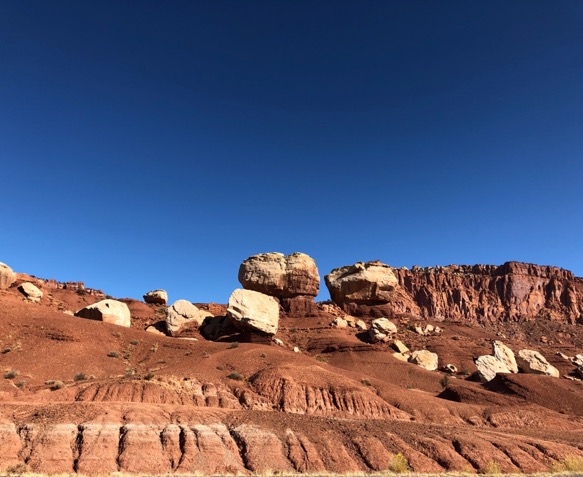 If you’re not heading east like I was or heading south to the Glen Canyon National Recreation Area and Antelope Canyon to have your photo taken, which I have done and am not necessarily recommending… as honestly photoshopping yourself into a photo would feel as authentic an experience as trying to catch a shot there without tourists… you might want to head northwest into the Fishlake National Forest.

Nonetheless, here are some shots of Antelope Canyon that will make you want to go there anyway. Not only is the necessity of making an appointment and being herded through in a mass annoying, but it was so hot the day I visited that the fringe of my skirt burned my leg when I stepped out of the vehicle. I kid you not. Take plenty of water and chap stick. I wore sandals and my feet cracked over the hour I took the tour. Cracked so deeply they bled. I’m generally a good sport, but my feet hurt too much to walk on at all for the next day and a half.

I camped at Lake Powell that night. It is awfully blue though and I couldn’t help thinking that kayaking into the canyons would be pretty cool. 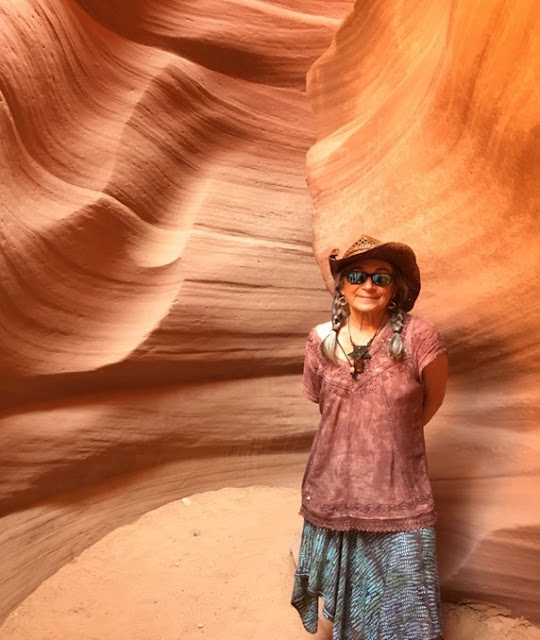 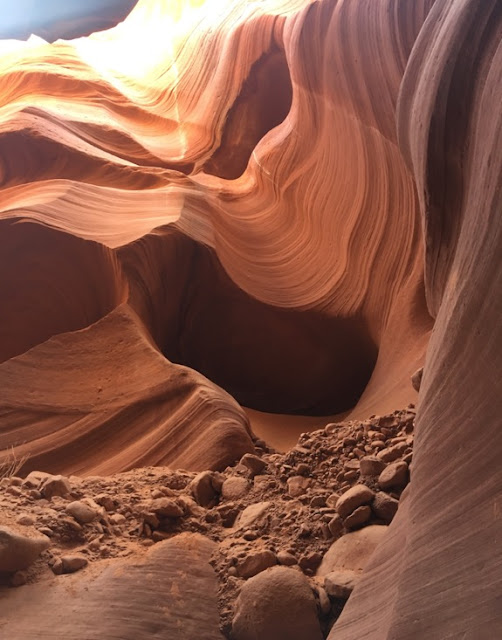 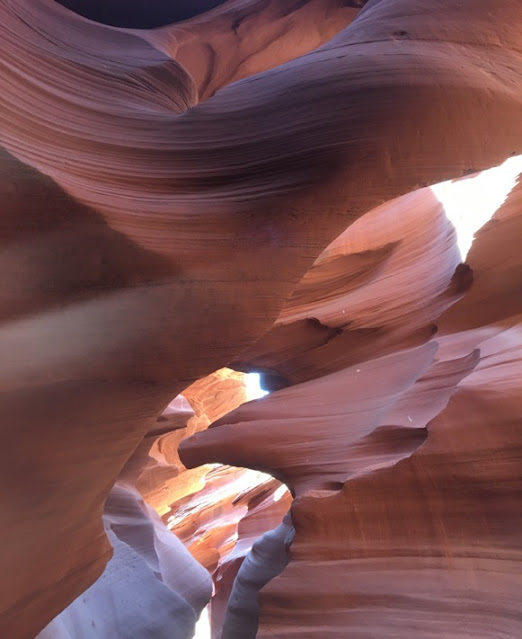 But back to heading northwest into the Fishlake National Forest. It’s a pretty forest for sure but what I particularly like is that it is home to the Pando clone, a 106 acre stand of aspens that is 80,000 years old and believed to be the largest living terrestrial organism. Honestly, you could drive right through it on Highway 25 and though admiring the quaking aspens, you might not be aware that you are passing through something so monumental. Sadly, the Trembling Giant as Pando is also called, is not regenerating. 47,000 genetically identical quaking aspen trees originating from a single parent clone are connected through an underground root system and it is, for unknown reasons, dying. 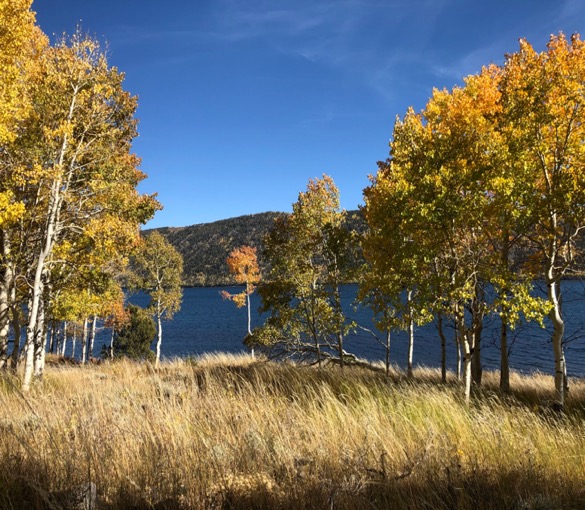 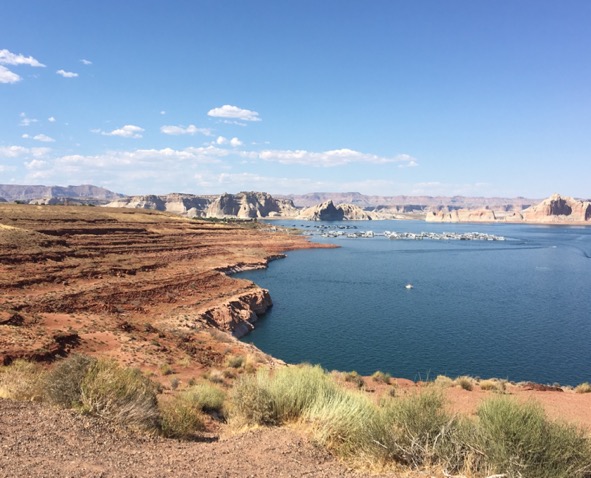 But I was not going to Fishlake or Antelope Canyon and Lake Powell this trip, but heading back to Virginia, so I took 24 east heading toward Hanksville where 24 takes a sharp left and heads north toward Goblin Valley State Park and Highway 70. Keep your eyes open here. Before coming to the turnoff for Goblin Valley, there is a pull-off on the left with around a dozen tubular binoculars facing different sites in the distance. I never saw this type of setup before. It’s perfect because it focuses in on and identifies what you are looking at. I like this view of Temple Mountain as it looks so mystical. I took a left when I saw the sign for Goblin Valley State Park as that sounded like a place where I’d like to sleep. Surrounded by goblins. I’d seen a lot of magnificent rock formations, but not a field of goblins. The night skies had to be fantastic there too. Five miles down the paved road was a sign for the entrance road to the state park. I peered down the dusty road for a peek at a goblin but didn’t see anything beyond the fee sign which read $15 entrance fee, $30 for camping. There was no shade to be seen either. It was still too early, midday and hot to be terribly inviting, so I continued down the road a bit while I was thinking about whether I should stop to camp. The road in front of me was no longer paved. To my right were some pretty impressive pictographs. 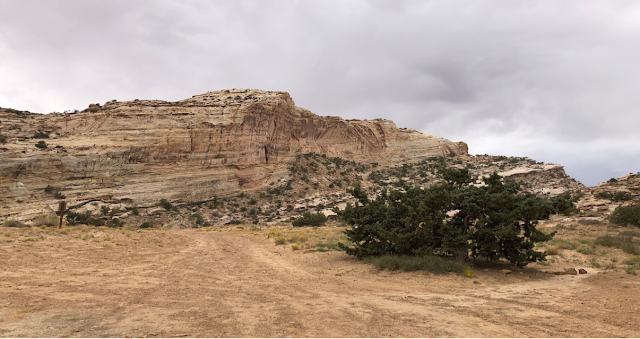 On the way in, I passed a sign indicating that this road led to I-70, though it didn’t say how far. And I had no cell service to check.

Still, this scenic route was tempting. Already I’d seen some very clear pictographs. There was no telling what else I might discover. Goblins or no goblins, the scenery was enchanting. Still, it wasn’t long however before the road became too washed out. There were simply too many large rocks and deep ruts. This would be a terrible place to break an axle. Reluctantly, I turned back.

Although I now had a second chance, the sun was still too high to want to languish in the hot desert, even accompanied by goblins, so I continued on.

This café just down the road in Green River was open and had my name written all over it, but I wasn’t hungry.  Next time.

I drove until the sun set and then slept that night at a small rest stop near Hole in the Rock. There were a few tractor-trailer trucks sharing the lot and of course they keep their engines rumbling all night so they can enjoy air conditioning. I parked at an angle so I wouldn’t be sucking in their exhaust fumes. I washed up, stuffed in some earplugs and passed out.

Tomorrow I’d head over to Canyonlands and Arches National Parks.