I must have been in a fog. I have no photos, no entries in my journal, no scribbled notes, no texts to self. The last photo was September 13th mid-afternoon at Great Sands. I recall a young man gifting me two fantastic beers from a microbrewery in Pagosa Springs for giving him a ride to his car as his young family emerged from a trail hot and tired and distant from their vehicle. I would have thought I’d have recorded what beers and what brewery. But no.

No evidence except a receipt for an oil change at 8:30 in the morning of September 14th in Hays, Kansas and a photo of a placard at a rest stop that evening with information on Abraham Lincoln’s boyhood home. I must have driven across Kansas numb from news of my mother’s death. Maybe numb is the best way to tackle Interstate 70. I remember now being so tired on the Interstate that I thought I would swerve into the next set of halogen lights blinding me. I pulled off and I vaguely recall a town with only a convenience store and some sort of industry with bright lights at the edge of a suburban neighborhood where I slept. I evidently woke early and headed into Hays for an oil and air filter change. I’m surprised I landed on Hays: I’d been carrying around an unsavory memory of the town for over forty years. Nonetheless I did it and the next day passed unrecorded as well. I remember that rest stop where I decided I’d visit Abraham Lincoln’s boyhood home. I’d picked up a couple shiny buckeyes to rub between my fingers while I sat at a picnic table there waiting for soup to heat.

The trees there were broad and leafy, and the rest area was pleasant except that I was almost asleep when some fellow pulled his car next to mine and talked on the phone for well over an hour. I was too tired to get up and move. Grief does that to you.  It was warm so we both had our windows open. I just lay there very still staring at the car ceiling, listening to him talk on and on until he finally went home.

Abraham Lincoln’s family moved to the boyhood home in Little Pigeon Creek, Indiana when he was seven. His father was a good carpenter and built their log cabin. The footprint is there at the national park as well as a replica home nearby. Not long after Abraham’s mother died from milk sickness, which also struck down a number of her neighbors and close relatives. Milk sickness is from drinking milk from cows who have eaten the poisonous white snakeroot plant, native to the woodlands there. 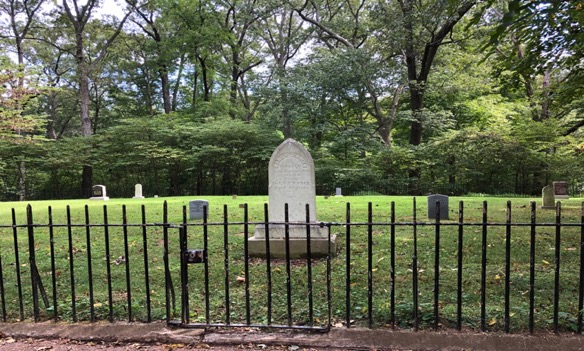 His older sister took care of him until his father remarried the next year, his new wife Sarah bringing her three children into the family. Sarah proved a positive influence, encouraging Abraham to read. Lincoln’s sporadic formal schooling probably added to the sum total of one year, but he could read and did so avidly. I think it was this image of him in his loft bed reading by candlelight that drew me there that day. When I was young, I spent a lot of time alone reading. We lived in an isolated hollow with a creek running through it.

Bereft now of my mother forever more, I was searching through the tunnel of time for some childhood comfort.

It was a silent, rainy day with few cars in the lot.  I wandered through the dark museum, curious what books Sarah had brought and what else opened his mind to think the way he did. The docent looked through her file cabinet and retrieved additional information for me: he’d read Arabian Nights, Benjamin Franklin’s Autobiography, Life of Washington, Pilgrim’s Progress, Aesop’s Fables, Ivanhoe, Robinson Crusoe. For two hours, I wandered the trails that Lincoln did when his mom died. I took only the photo of his mother’s tombstone and this, I think because it reminded me of Walt Whitman’s poem When Lilacs Last in the Dooryard Bloom’d about Lincoln’s funeral car traveling the tracks from Washington, DC to his burial place in Springfield, Illinois. 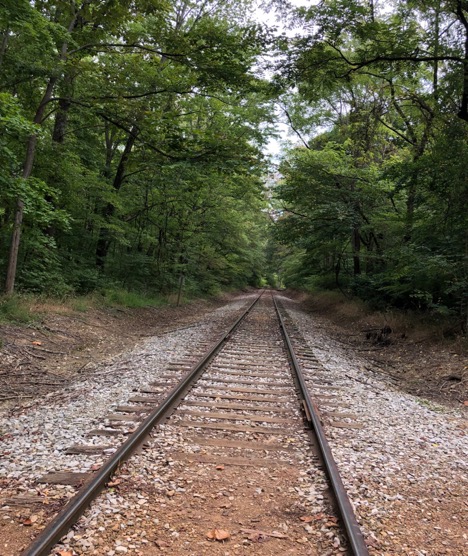 I left when it began to rain. It was time now to go home. To go back to my log cabin alone deep in the Appalachian forest.