I am not one to seek conventional medical care lightly. If my home made herbal remedy has not worked in a year and a half I will meditate on which might be the appropriate Bach flower essence.  If another four months has gone by and I am still suffering, I will consider acupuncture or perhaps a Shamanic journey.  Caleb's recent wrist surgery where it had to be re-broken and set after a year and a half got me to wondering whether I would be clenching my teeth with every step over the next three months as my crushed toe bones pinched raw nerve endings.  I have been doing a lot of walking, maybe twelve miles a day.  So when I arrived in Seville on Sunday, my first order of business after dropping my filled-with-rocks knapsack off at the hostel, its merciless weight grinding my purple, crumbling toe, my first order of business was to find an urgent care facility. This turned out to be the emergency ward at the Hospital of the Virgen Macarena. 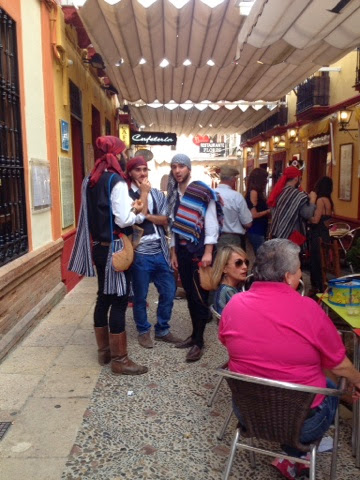