Went out with two of my hostel roommates, Julia from Canada and oh, gosh I never got her name right, something like Yaelrel from Israel, in search of some fun.  We didn't get started until pretty late, but late is early in Andalusia, so even though we got lost many times, getting sidetracked with a group of other foreign girls who wanted to set a record doing shots at a bar that encouraged that.  Though doing shots is synonymous with throwing up in my book, I sociably had one of something I never heard of and never will remember. Though we never found the first stop on our itinerary, we ran into some folks who helped us find the nightclub Freddy, our hostelkeeper recommended as alternative. 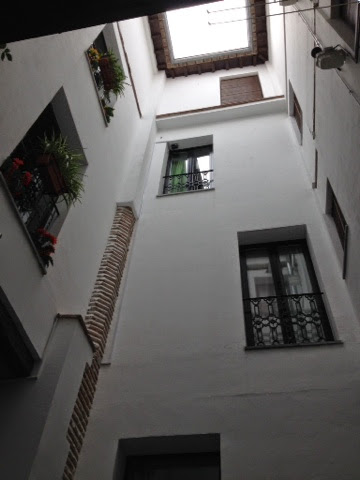 The interior courtyard walls of the hostel.
I never heard Metisaje Music before, a fusion of everything.  Absolutely everything, so that you laugh at the turns the music takes... and it is the best dance music ever.  By four a.m., the entire (pirate) bar was dancing together.