I had seen pictures of Ronda and was told by the first person directing me when I was lost coming out of the train station that Ronda is the most romantic spot in the world. (I love these Spanish women. I have joined four of them now. They take my arm and just walk with me for as far as they are going and then point where I need to go, at the last moment saving me from stepping in the path of a speeding car or bicycle.  Sometimes they chatter and sometimes they are silent, but I just keep pace and they leave me saying, " ha whego," which I am pretty sure is short for hasta luego.) 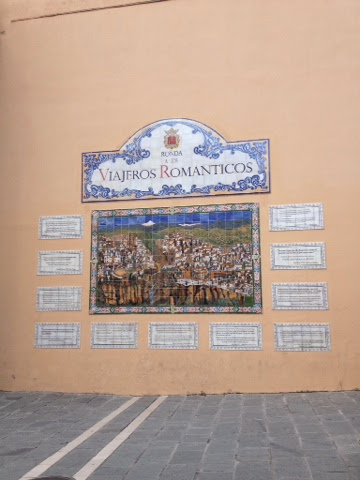 According to the monument, many famous writers and philosophers have agreed that Ronda is romantic.
And so I was quite alarmed to find what appeared to be my hostel after walking through a pretty seamy section of town, in the intense heat with my pack becoming heavier on only two hours of sleep and a hangover. (I spent the preceding might in a bar around the corner from my hostel in Grenada which advertised a guitar player influenced by Hank Williams and Towns van Zandt. Though I prefer local culture to the familiar when traveling, I was curious how the Andalusian spirit would interpret these guys.) 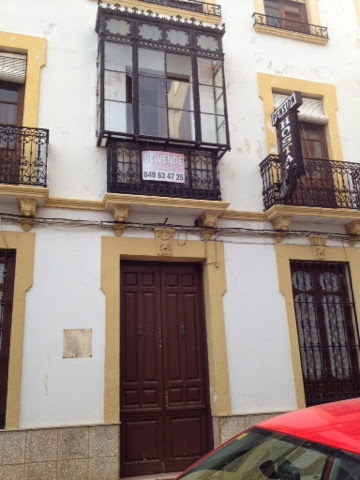 The picture does not do it the injustice it deserves: broken windows, filthy blinds, torn drapes. Vacant, with a "For Sale" sign.
What distressed me most was recalling that there were no other options in Ronda - this was the only hostel and all b&bs and hotels had been booked. 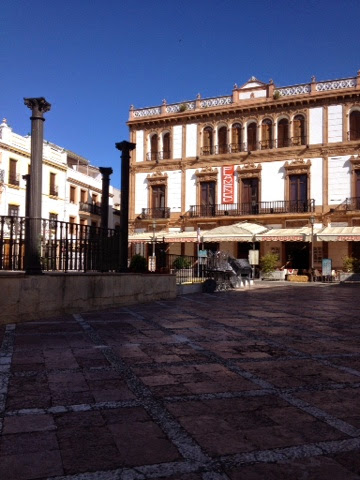 The Town Square was empty.
Surprisingly, as I had not yet noticed many modern touches to this remote town, I found a cafe with wi-fi. So I ordered a coffee and began frantically trying to reach the booking company.  BTW, Grenada had free wi-fi hot spots here and there and I was delightfully surprised that even In a town as shabby as Ronda first appeared, that it was possible in an old cafe to connect.
Of course the booking company did not respond.  I scoured the website for reviews of the property. When had it shut down? The last reviews were only a few months prior and it didn't sound THIS bad. I lingered as long as I could stand it, but did not hear back from the booking company.
So at my check- in time I trudged back to see if anyone would answer the door this time. My room was a single private, so perhaps there was one on the first floor behind the lace curtains.
And this time when I got there, it looked like this. 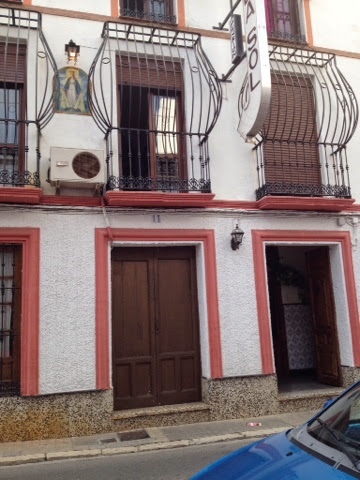 Same name, two doors down.  A world of difference.
The cafe I hung out in was next to the bus station and I had watched as bus loads of day tourists streamed in.  There are quite a few on any given day, but this was a festival weekend as well. Much of the town was dressed in traditional costumes and many had decorated their horses and carriages as well. There were dozens of tents set up where local dishes were served and there were plenty  of alcohol options in the crowded plazas.  There was music and dancing and general revelry. And it was very, very hot.
I decided to wash up and take a siesta in my cool room with the open window where I could hear the laundry flapping until the day tourists left and the sun moved across the sky.
When, at the end of the afternoon, when I moseyed on out this is what I saw. 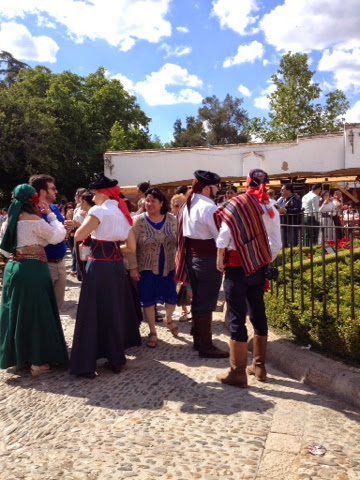 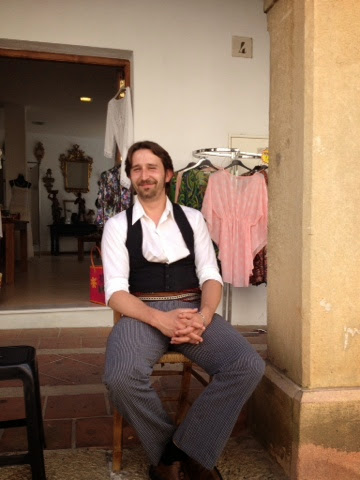 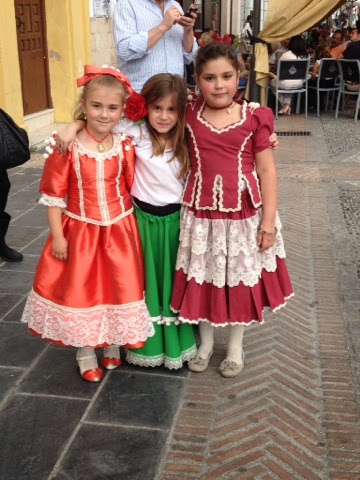 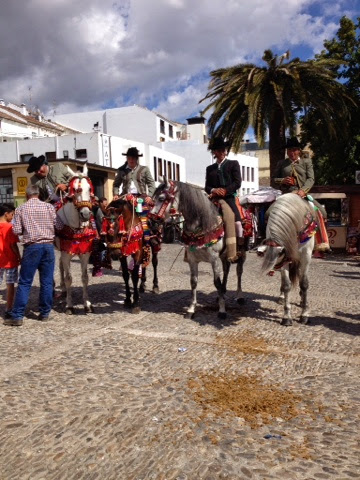 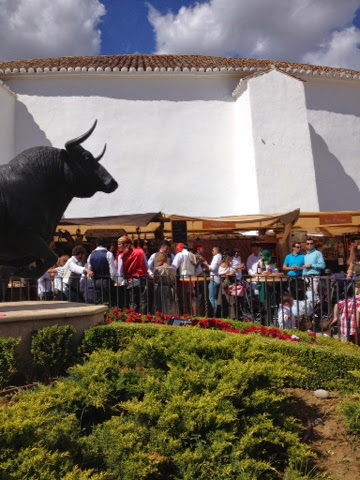 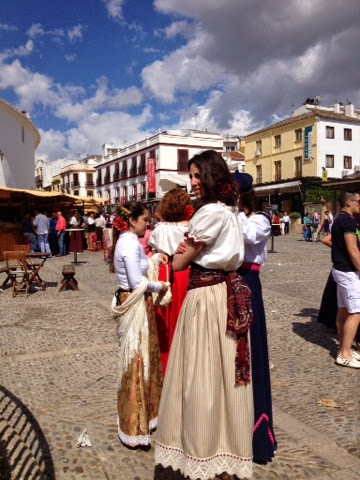 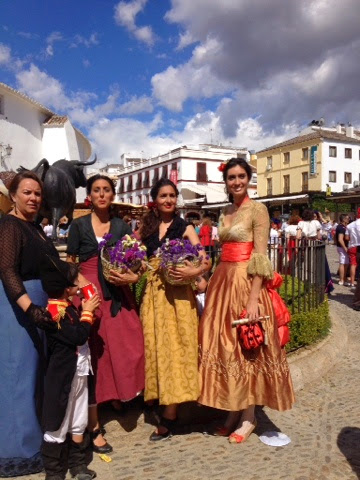 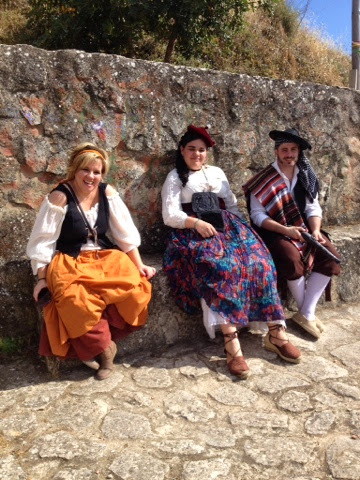 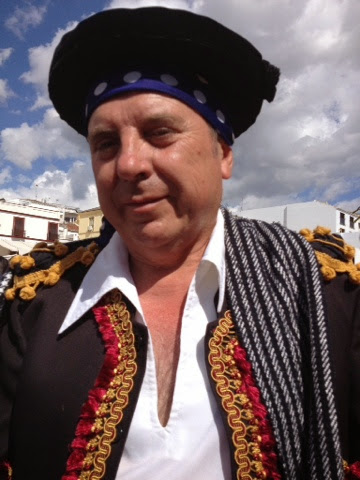 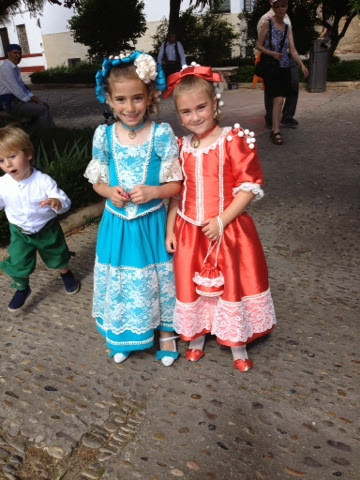 The girl in the coral dress was everywhere. My guess is that she will either be organizing ths event in the future of be a star flamenco performer. 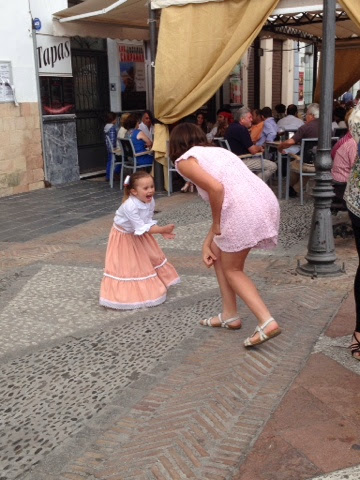 No end of fun!
And, at the edge of town, the gorge. 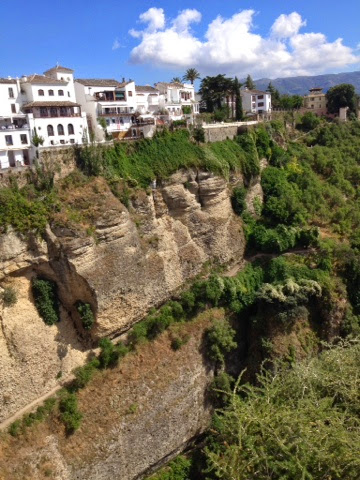 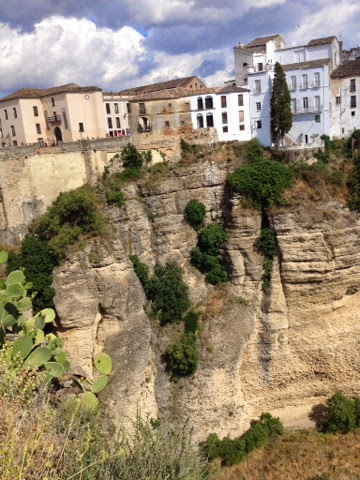 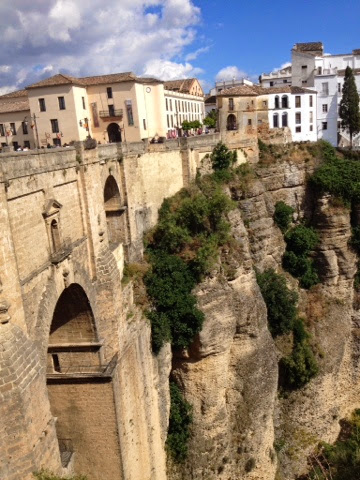 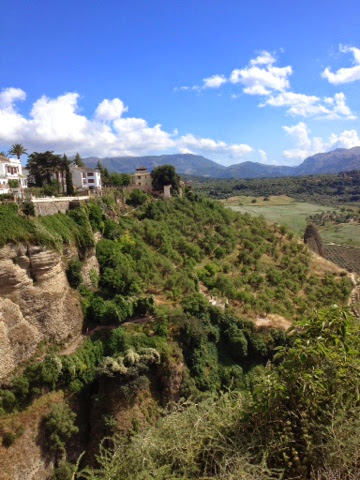 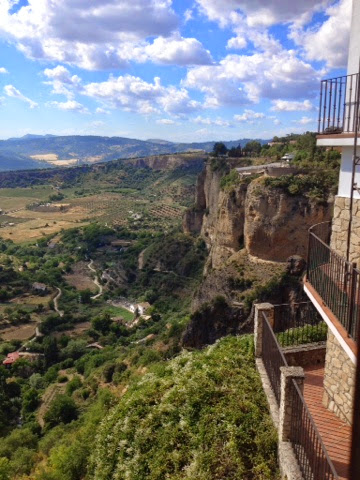 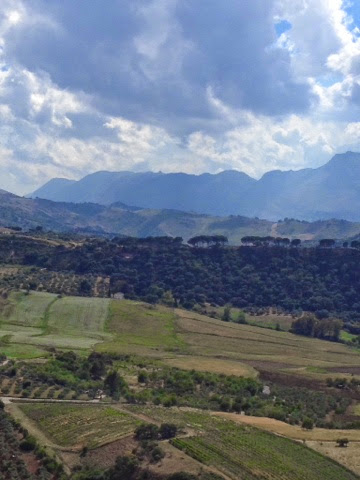 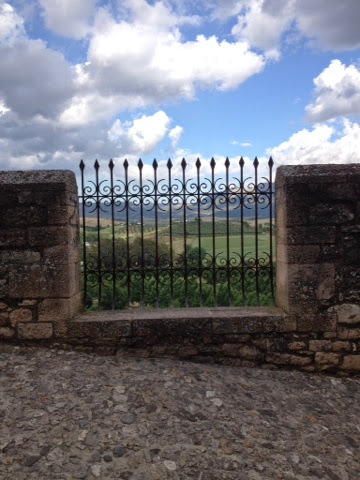 I was beginning to feel the romance of it. It reminded me of Harpers Ferry, WV, where Greg proposed to me on the Cumberland Height cliffs above the fork of the Potomac and Shenandoah and that was very much on my mind as I walked down and down and down to the bottom of the Secret Mine. 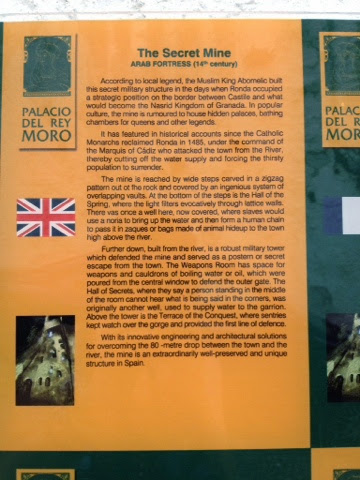 There I met Jeannette and Will.  They had such a beautiful aura about them. They were on their honeymoon.  My mood had changed.  I got it. Ronda is romantic and love is eternal.
Sunday morning. Church bells were ringing. Seemed like most people were sleeping through their hangovers and catching a later Mass. 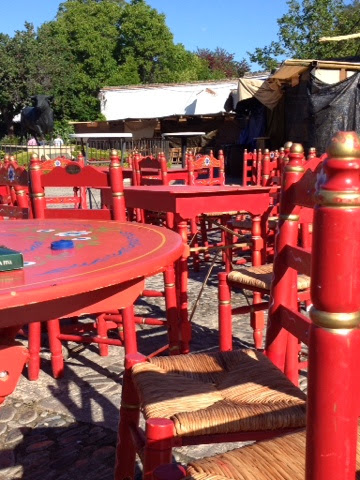 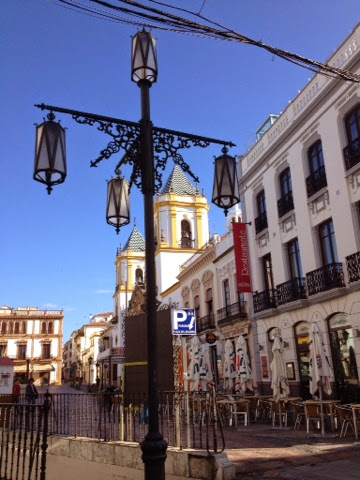 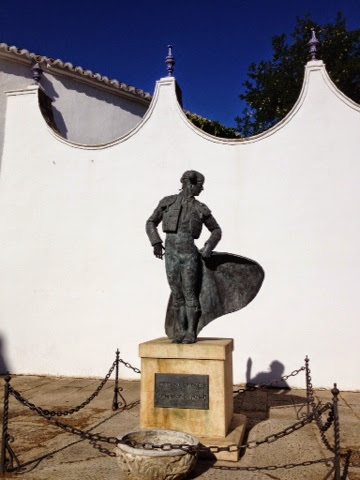 This is a monument outside the bullring to the local bullfighter, credited with thinking up the idea of using a red cape.