The train ride through Tuscany was lovely.
P 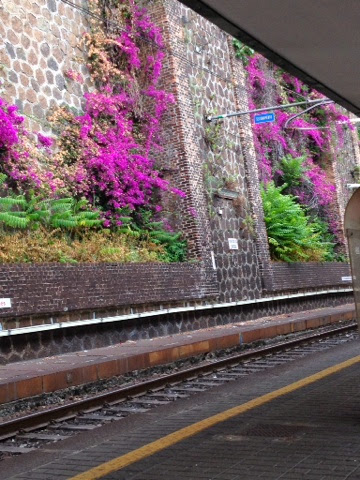 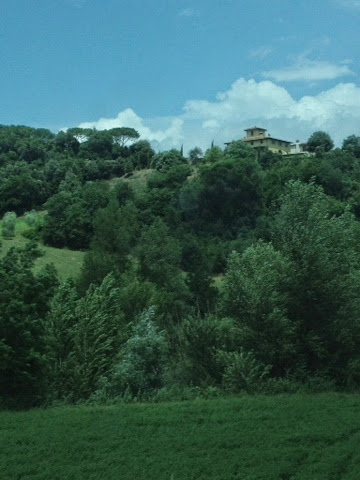 I arrived in Florence in the heat of the day and once again followed vague hostel directions the wrong way, my pack weighing ever heavier on my back with the extra mile.  These directions said to make a left outside the main train station entrance. I checked all of the entrances before deciding which one must be the main one (I still disagree with the hostel owner on this) and took a left toward the McDonald's as indicated (unfortunately, I was to find this was one of two nearby).  At any rate, by the time I had assaulted at least a dozen people shopping in the crowded street stalls with my oversized load and was drenched with sweat, I came upon a small sign with the name of my hostel, no less than The Emerald Palace, above a doorbell which hardly seemed legit and no one answered. 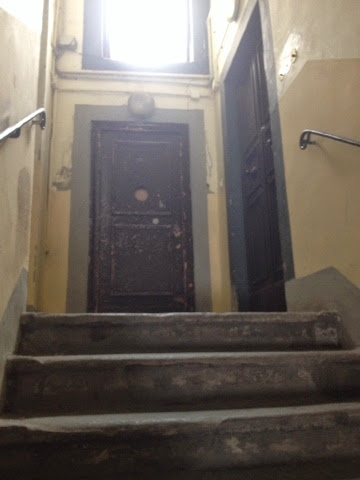 Surprisingly, once I made it up three flights of stairs, I found the place pretty cool: clean, spacious, secure and with a fun street view as it was centrally located and there was a ridiculous amount of varied activity below.
Breakfast was Nutella on shortbread cookies. With coffee, it made for a good buzz. 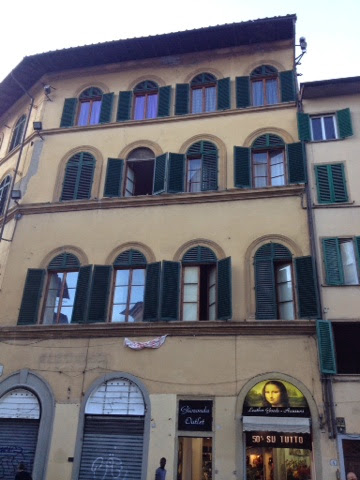 My room was the one with the open shutters, next to top floor.  This is the straight out view (dome of the Duomo to the left); like the Andalusian cities, with the window open, you could expect the night's sleep to be interrupted. In Florence it was the sound of demolition and rebuilding, rather than festive Spaniards. This has evidently been going on for centuries. 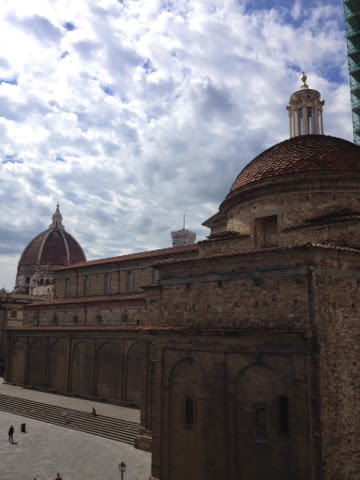 Even clusters of tacky tourists taking selfies amid the noisy hordes trashing the streets, their females weaving in and out of the omnipresent leather retail vendors looking for that perfect bejeweled green leather bag while their cranky mates wait listlessly on the crowded sidewalks, vaguely wondering whether more gelato would calm the kids anxious for anything but this, even when the orchestra in the plaza warms up only to play marching songs, even though the bus driver was downright surly with me for butchering the pronunciation of Santa Miniato al Monte when I asked if he was going that way, and finally, event the unrelenting sun and the obscenely long lines outside the tourist attractions could not minimize the grandeur of Florence. 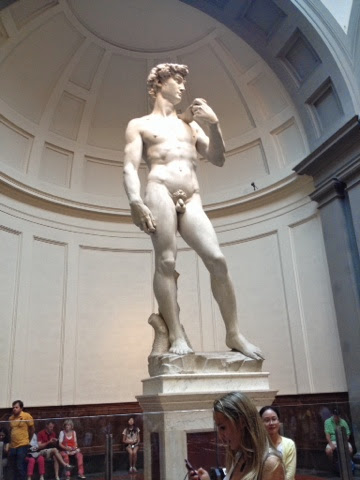 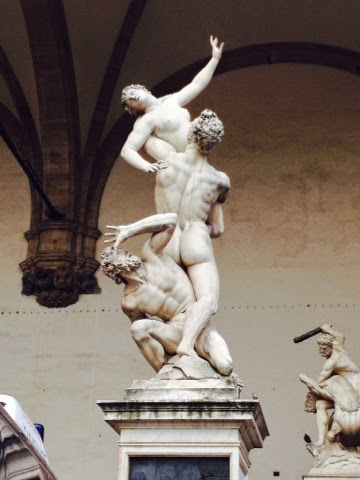 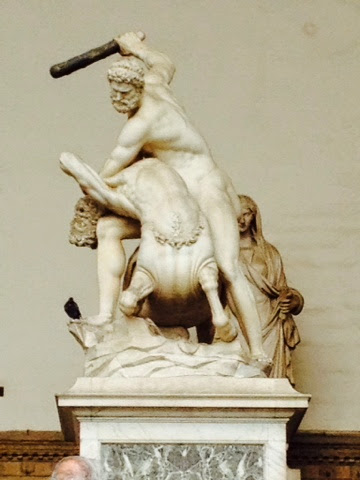 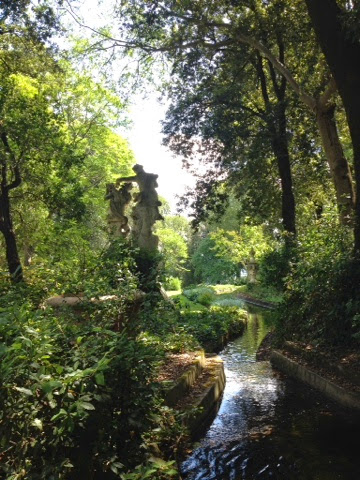 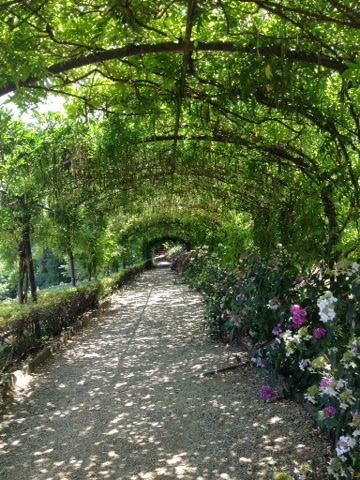 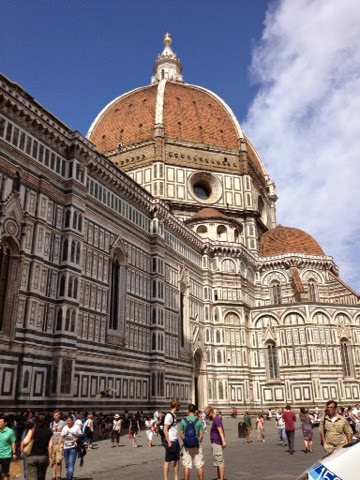 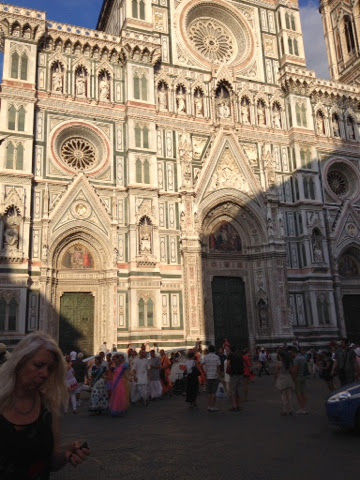 Admittedly, I was in a daze. It was almost too much. It felt like the city was haunted by giants. Yet it was overrun by loud tourists saying stupid things and buying everything in sight.
When I packed my picnic lunch for my visit to the ancient monastery on the hill overlooking Firenze, I didn't even notice the rain clouds. 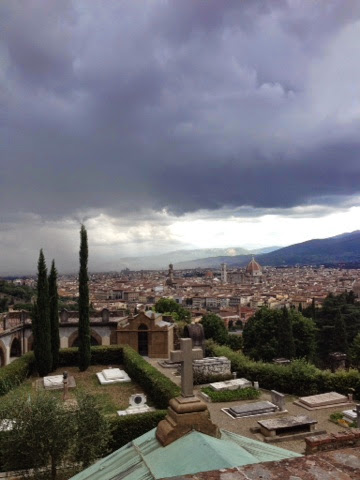 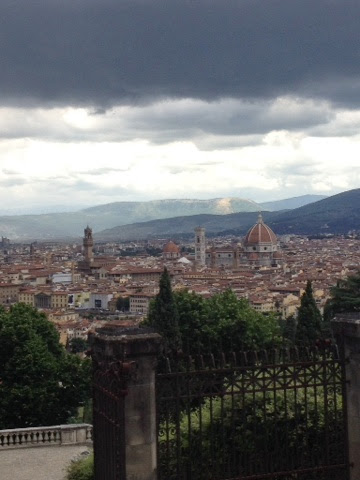 The church was built around 1,000 A.D.  The cemetery had many small ornate family castles for their dead.  It was quite extensive, interesting and creepy. It began thundering as soon as I reached the top of the stairs and as the lightning bolts shot pretty close, I ducked into the dark cathedral.  It felt very holy and I prayed for awhile in the beautiful old basilica and then ventured down to the lower apse to see the old ceiling murals. It was even darker down there...and empty, except for the wavering votives. I lit one for for my friend Tedd, a sculptor, who joined the giants this summer.
A culinary artist friend recommended a restaurant in Florence, so of course that was a top priority. It was, hands down, the best meal I have ever had. I was still in my own world that evening as I was dining.  I don't know if it was the incredible amount of external stimuli which made me even more interior than usual, but I realized when I glanced over and saw the three waiters grinning while they watched me eating that in my disbelief and ecstasy, my eyes must have been rolling to the top of my head.  It was a bit embarrassing. They joked with me and gave me an after dinner cordial (limoncello) on the house.