My flight from Edinburgh to Frankfurt was delayed, causing me to miss my connection, the last flight to Vienna.  As I had to stay overnight, I booked my flight out at the end of the next day, so that I could explore Franfurt.  The skyline as we flew in looked enchanting, so I was hoping to dispel my miserable preconceptions of Frankfurt. I read an article in National Geographic not long ago about how memory is stored in the brain. Basically, all thoughts about the same subject are catalogued in the same spot. As an illustration, the issue included a foldout of 100 photos of Jennifer Anniston, all from different contexts and the point was, that no matter what aspect of her life or performances you were thinking of, the thought followed a neural pathway leading to the same destination. Frankfurt is in a seamy neighborhood in my brain. Hearing of the antics of young drunken army personnel stained my mind early on. This was compounded by tales over subsequent years of even more perverse shenanigans by army personnel who had been stationed there. Having never read one article in the hundreds and hundreds of travel magazines over the years about a cultural, artistic, musical or eatery renaissance or even any decent architecture in Frankfurt, with the exception of a kindergarten designed by the Viennese-born artist Friedensreich Hundertwasser, confirmed my disinterest in visiting. And I was sued by a woman I never met who lived on the Frankfurt Army base before she headed to Albuquerque and filed a lawsuit in federal court against me for One Billion Dollars and for kidnapping four or five of her children. It took me a year to get it dismissed.  Added to this general distaste of Frankfurt was of course the elephant in the room: Hitler and the Nazi movement Gemany embraced, the recent memory overshadowing my childhood.  So it was with disappointment that my exchange with the control freak Customs Officials when I landed was heated and negative, and then that my first hour of exploring the city only affirmed my prejudice that the town was lacking in any culture.  Coming out of the train station at Hauptwache, I first entered into the typical open mall of department stores that fuel the blood of tourists.
I skirted the crowd waiting for the opening of the Flagship Fossil store and found a mild bit of hope at the end of the street in an old brick square.  Though it was surrounded largely by modern buildings, it had color. 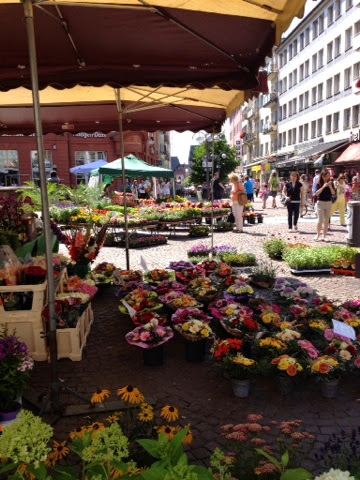 But the surrounding streets offered only unimaginative, rectangular concrete and glass buildings. Street upon street. 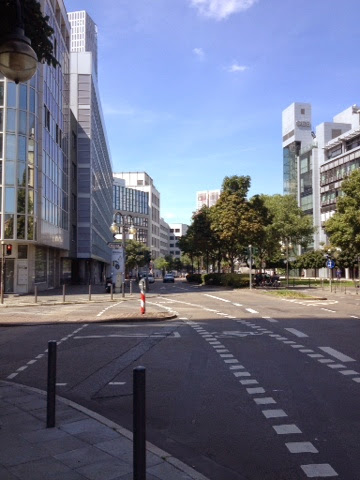 .
By the second hour, I had wandered far enough out to find the Victorian houses and things started to look up.  There were unbroken rows and rows of them, many with flowers on their balconies.  It was very silent, not much traffic though there were lots of cars parks along the neighborhood streets.  The subway had been crowded, so perhaps most residents were at work. I came upon the cool coffee shop with a few people outside at cafe tables and the sign in the window advising, "Make coffee, not war."  I looked around hopefully for more signs of underground artists, but didn't find any.
There were a lot of street cleaners though, which windy Edinburgh could certainly use.  Its plug to "Keep Britain Tidy" was largely ignored.  As I walked further I began to wonder if the street cleaning wasn't a bit compulsive. There were men with brooms, sweeping manually, followed by street cleaning machines that sucked up their piles of debris and brushed the streets. There were also men with leaf blowers followed by brushing machines on the sidewalks, even in the residential neighborhoods. The outdoors was surprisingly clean.
As I walked, I scanned the paper bills for entertainment advertisements, but found only English theater, Berlin opera and an upcoming two day festival of Highland Games on the mainlaind.  Nothing homegrown.
In the third hour I found the Goethe University.  At first blush, it appeared that the school was out for summer. I wandered more deeply into the campus. It had been planned with forethought: the modern  buildings were attractive and the grounds were lovely, with large expanses of lush grass and weeping willows, where students of different races relaxed chatting or reading. A large outdoor cafe with umbrellas to shade the sun was packed. My faith in humanity was even more fully restored when I came upon the group of students by the splashing fountain, drinking beer, listening to old music and playing hacky sack.  Normal kids, a good sign. 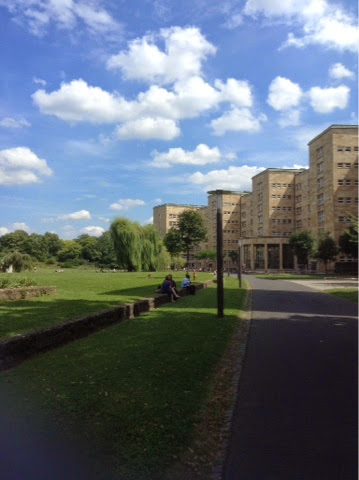 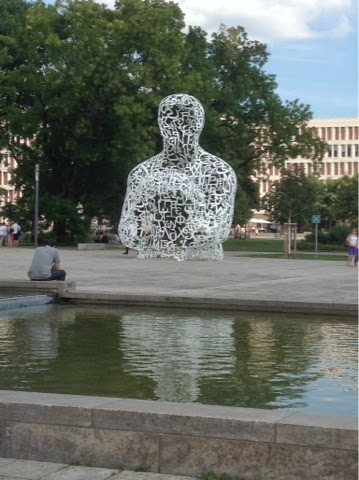 After that I found Grunepark, a huge beautiful park with a concentric brick walk overhung with trees encircling it.  The park interior was divided into inviting spaces for sunbathing or tossing a frisbee. There were cool playgrounds and lots of wooden benches laid out in a way that offered the option for seclusion or to socialize.
I felt someone's gaze and looked up from my reading on the bench to see a naked man sunbathing, looking at me. I am not sure how I didn't notice that he was in my direct view when I sat down, but really I was absorbed in my book and it was a comfortable bench in the shade, so I stayed. Of course it was impossible not to keep glancing over to see him narcissistically survey his body. After some time, he got up and pulled on his black silk trousers, his white collared shirt and his leather dress shoes.  Back to work.
After a few chapters, I got up and followed a sweet serpentine path through the park... and that's when I found it: the heart of Frankfurt that made me want to stay awhile longer. 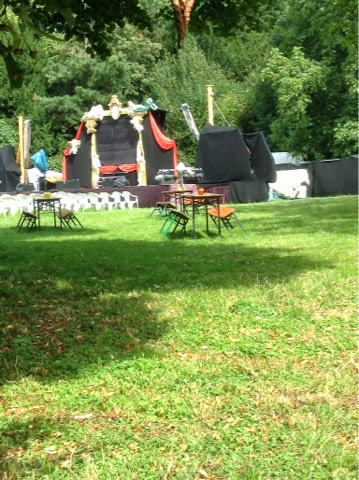 The summer stage is a bit distant, but I had to slip under a canvas over the fencing to get a photo at all. It's pretty adorable. I can imagine sitting here as dusk falls and the fireflies appear, sipping a Riesling and waiting for the performance to begin. 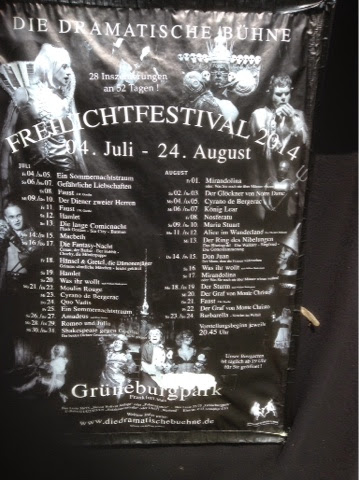 The next night the local troupe was performing Maria Stuart. The book I have been reading is about her life: Stephen Zweig's biography of Mary, Queen of Scots. The seamy neighborhood in my mind where Frankfurt resides has been happily renovated.