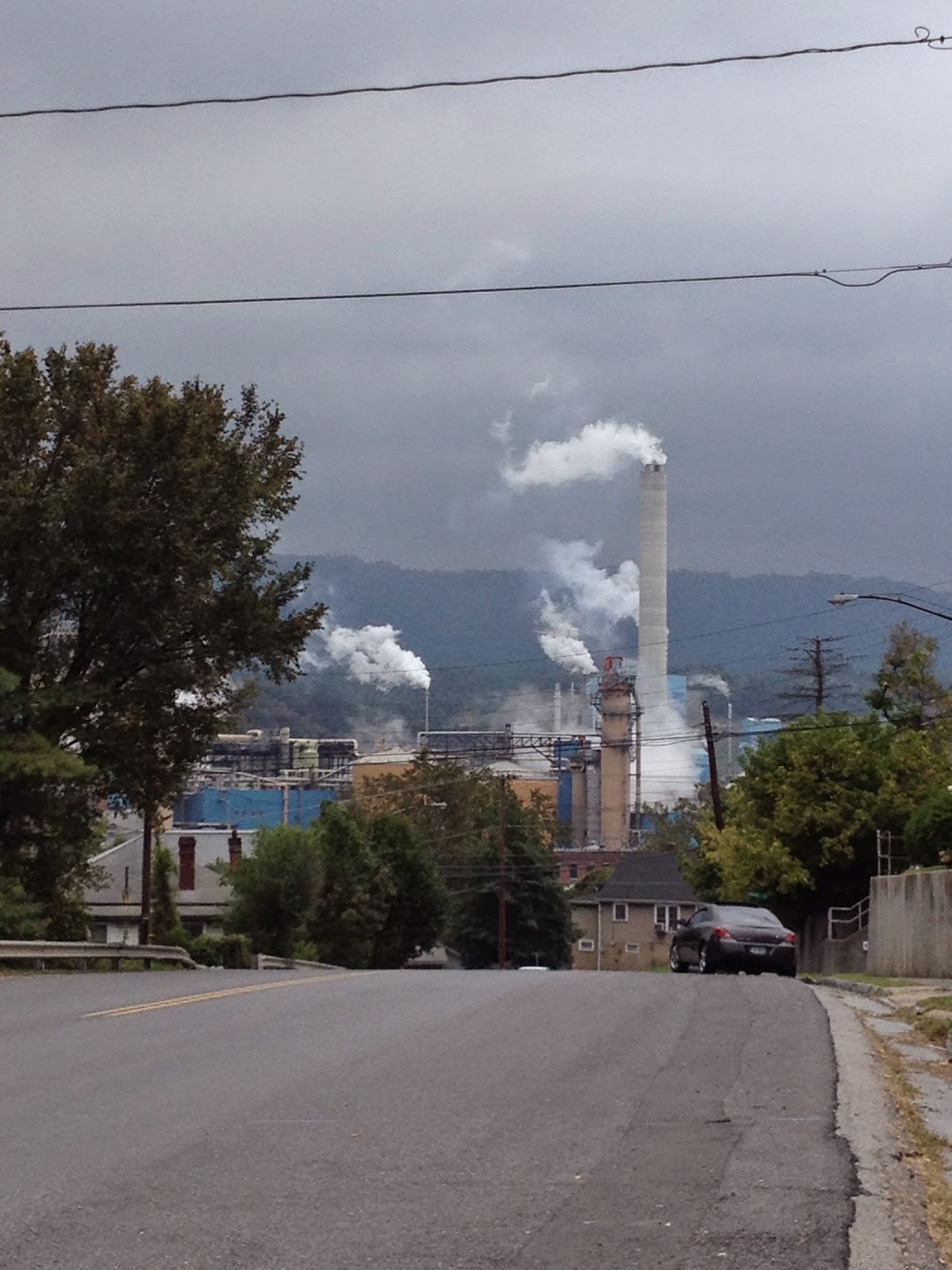 Few smells are more nauseous than paper mills.  A cold air inversion trapping the pollution in can extend miles and miles, smothering the most remote and otherwise pristine locales with a smell like rotten cabbage.  I was reminded that it is a matter of perspective by a government clerk who missed the fragrance of her hometown, Covington, Virginia where the above photo was taken of the Mead Westvaco plant.

Thankfully, Friday's weather did not trap the smell and surprisingly, I was not overwhelmed, even within half mile of the plant where I went to get my weed eater repaired.

The trip was a beautiful experience of country living.  At the end of the winding road from my home is a gas station.  As I made the turn, two hands shot up in greeting: one from a neighbor in the pickup truck at the pump; and, the other from a young man with whom he was yukking it up.  I say "yukking it up" as an onomatopoeia as that is what a lot of the thick southern accents sounds like to my ears.  Just this morning I had to ask someone to repeat a name on the telephone that sounded like "William" to me and was really "Glenn" when he slowly spelled it out.  I couldn't place the name of the young man, though it surprised me that he never seemed to age.  He was wearing a camouflage jacket and camouflage bill hat, which distinguished him from absolutely no one in this remote wilderness.

I stopped at the recycling and landfill outpost.  Now mind you, I have been away for a number of years working in another state… and I have lived in a number of different locales and I travel a bit, so names and faces often get mixed in the jumble of the thousands of people I have met over the years.  Still, there was that old couple.  He is thin and weathered of course, which country folk show much sooner than the jet set in Miami, but I would estimate he is in his early seventies, as is his wife.  He was scavenging through the deep garbage bin for metal salvage to sell.  She was sitting calmly in the pickup with the windows up though it was warm.  In fairness to her, the garbage bin next to her really does stink.  With her, it seemed more like a preservation of movement.  Why bother to crank down the window?  Although as I said, she is getting up there in years, there is something very childlike about her.  She always has that same peaceful smile on her face that makes her seem like a third grade girl.  They both waved.

I drove past dramatic bluish mountains to my left and right, past a clear river tumbling down toward the James, around hairpin turns hoping no deer would leap out and, in about forty minutes, made my way to the nearest bank.  I parked and went in as I needed to ask whether I might obtain a foreign currency draft to pay a hospital in Spain that did not have an online payment system.  The teller was, as I was afraid, utterly baffled by my request and I left with only the satisfaction of hearing the other teller proudly tell a customer that her niece was homecoming queen and my teller's delight in hearing this.

Then I went to the post office for some stamps.  The postmistress was very much on her game, efficiently pulling out a stash of post card stamps (this was the third relatively local post office I had been to over the past few weeks in heretofore unsuccessful bids to buy post card stamps) and she was extra nice.

Feeling warm-hearted, I drove to the farm equipment repair shop in the next town. They have a local reputation for being reasonably priced and fair, both of which they are.  Although I was hoping to get the weed-eater repaired on the spot, they did look at it and couldn't make it happen.  I still enjoyed exploring the farm store while I waited. The owner proudly gave me a personal tour.  Someone replaced the blade on my rusty old bow saw for free.  And the owner promised to have a pocket-size folding pruning saw on the shelf next week when I returned for my weed-eater, without me even committing to buying it.

It was such a far contrast to how I started out the week, arguing with a disreputable property management company, one of a few who take advantage of the college student community in Harrisonburg, Virginia and as it is just one community owned by a large real estate investment trust, I imagine they take advantage of this market with ungoverned tactics in landlord-friendly states nationwide.

In rural areas, everyone sees each other and transacts business together again and again, so there is an accountability that keeps people honest more readily and more genuine.