Legions. Hundreds of thousands of baby praying mantids, almost transparent skeletons gaining ground as they marched, growing larger and stronger, forcing their way out of the cocoons and overtaking my cabin.


Even a veteran hermit can have her moments of alarm, isolated in a log cabin deep in the dark forest.  It’s not exactly the answer to empty-nesting pangs when nests of insects decide to occupy the former home of children, now grown and gone.  So…there I was, Friday evening, lying on the old worn velvet couch, immersed in a novel when I heard skittering and clawing over in the corner of the dining room.  It sounded like birds building a nest in the protected corner of the porch above the apple butter pot.  No problem.  But an hour later when I heard the somewhat otherworldly activity, I questioned it.  It was dark now and an unlikely time to be building a nest.  I opened the screen door and squinted to see above the arc of the porch light.  No birds.  No signs of a nest.  I came in and rounded the corner to the dining room and looked up at the rafters.  WTF?  Eerie-shaped foam-like cocoons seethed out of the cracks between the highest logs in the corner.  Pine resin had shellacked a couple and was dripping down the largest one. 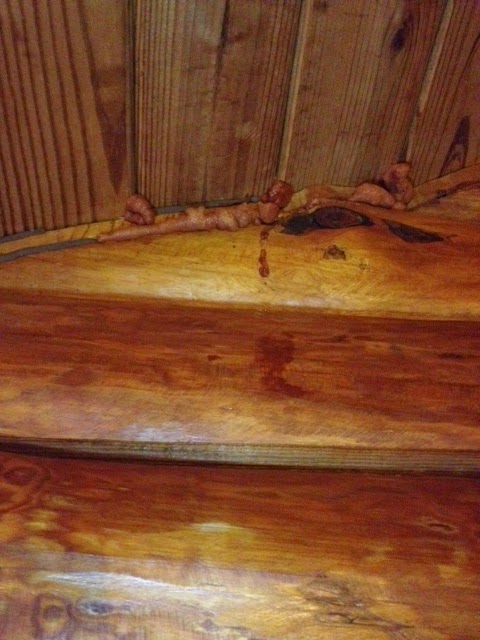 Was it insects or was the roof collapsing, compressing the top logs until all of their natural moisture was splurting out?  I searched for signs of insects.  No trace.

Had they laid hundreds and hundreds of eggs, creating a cocoon around them as they laid more… and then bolted while I was engrossed in the last two chapters?  I thought of the turtles I had watched mating that day.  Hours and hours and the moment after orgasm, she escaped to the woods at the edge of the yard in no time flat.

She was gone before he even rolled over from where he had collapsed on his back in ecstasy.

Did I mention that it was Friday night? No one responded.

Finally, I lighted on the praying mantids cocoons.  They were foam-like and could be any shape.

The articles raved about praying mantids.  But it looked to me like it could be too much of a good thing.  I dreaded the morning they would stir and break out.  Relieving the cabin of ladybugs and stink bugs was challenging enough for me. And they don’t look you in the eye like a praying mantis does.
Dreading what I had to do, I hardly slept.  I woke early and headed down to the stall in the chilly dawn for the tall stepladder.  I texted my son’s fianceé, in the county for her sister’s bridal shower, notifying her that I might need back-up help. What if the project was gooey?  What if, when I took my butter knife to the cocoons, thousands of jelly-like embryos came squirming toward me with some malevolent intent they only understood as a survival instinct?  I did not know how to prepare, but felt someone should know that I was in peril.

Two hours later I had most of it out and lying in pieces that looked like pastries on the countertop.  I had dissected several, searching for embryos, eggs or silhouettes of the departed. 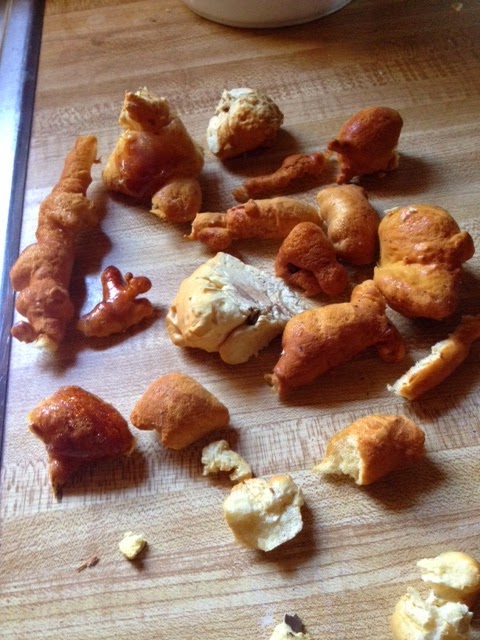 It was disappointing. Possibly the shinier beads of the tightly-woven cellulose were eggs?  Hundreds and hundreds of eggs. Thousands in fact. Tens of thousands in all. 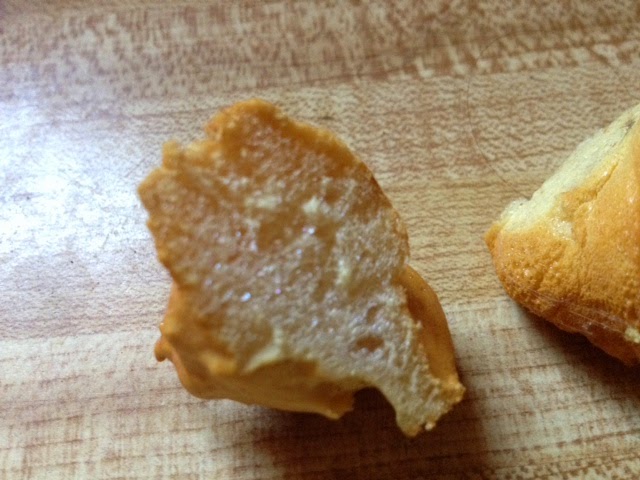 Around noon, the youngest rose from his hangover and texted a response.  “Mom, that’s sealant foam.  It’s been there since we moved in.  I remember it from when I was in elementary school.”