So... it is the end of summer here in the mountains.  Only two fireflies flickered on the hills descending from the front porch last night.  Someone has to be last I guess.  August saw a drought...ongoing...and the frogs behind the house in a new pond created last Spring have fallen silent.  The hum of the insects has changed, it is the more sonorous tone of autumn, the harbinger of the cold to come and the end of their fragrant, humid nights and sweltering afternoons amidst life's abundance.

I was busy, too busy this summer to settle down in front of the computer except to tend to necessary tasks.  Traveling back and forth to Richmond for work, long days of tedious document review, though spent in good company and a pleasant environment.  Taking an evening or two a week to hang out with Hannah and Rosie, or once even a quiet weekend at the beach with Hannah.  The breaking free on most weekends, back to the farm, floored each Saturday morning to see how the garden had flourished without me.  Quickly filling the cabin with flowers, harvesting vegetables to prepare meals for the coming week, relocating the small wildlife homesteading in the cool, damp basement.  Breathing in the country air, always redolent of pines here in the national forest, mowing, stretching, slipping in time with the boys if possible, once making it to a detox/retox pilates session of Justine's and then ironing and packing again, closing up the cabin and leaving out at 4 am Mondays.  Stopping for a biscuit dripping with bacon and cheese an hour in to the travel, giving me a stomach ache without fail, but grounding me to a ritual pronouncing departure from the country and immersion into my urban life.

So backing up to my first long weekend off: the 4th of July. 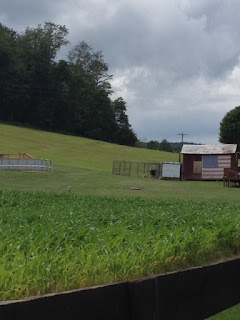 This, taken on the way back road to Harrisonburg, a road surprisingly bereft of the Confederate flags that sprang up in the more sordid neighborhoods along the main road.  Forgive them Lord, for they do not know, are not really capable of abstract reasoning, do not grasp that there are parts of the past that should not be preserved, legacies which should be recognized for what they were and let go in self-forgiveness and mature realization.  Even Richmond, a fairly decent racial coalescence, had its few skinny rednecks in mountain tire pickups with roaring exhaust parading Confederate flags this summer.

But there were no cries for secession on Independence Day, just hot dogs, beer and fireworks.  I attempted deviled eggs and in deep frustration trying to peel them had an aha! moment as to why they are called deviled eggs. 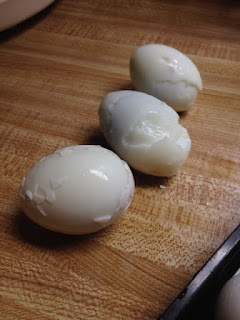 This was what my dish looked like already two hours late for the party.

Thankfully, I had enough rosemary and zinnias to somewhat redeem my traditional culinary failure with focaccia and flowers . 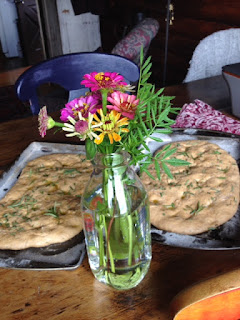 The party was great fun.