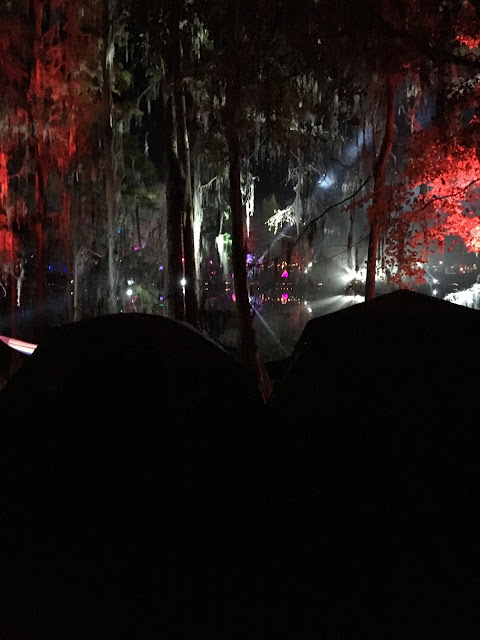 We traveled down the Appalachians and then the Smokies in late October, smiles on our faces.  The trees were afire with color and our hearts open with excitement.  I can't imagine a life without festivals.  The one we were heading to would turn out to be the coolest in my lifetime, apropos for a birthday celebration.  Music festivals have become increasingly more pleasant.  More eco - that is cleaner and with healthy food selections and they have become more artistic.  The light shows have become theater in of themselves. Some of the bands, like Umphrees McGee who played there, pay as much attention to the presentation as to the music itself, their light managers as valuable a member of the band as the musicians.

There have been some sputters and slides in the evolution of festivals, like the initial allowance of folding chairs as the population aged and then, in slow recognition of the disaster broken and abandoned chairs all over the place pose and the acceptance that festivals really are more about dancing than sitting, producers began setting tentative requirements (often ignored and not-at-all enforced), that the seating section recede a respectable distance from the stage. 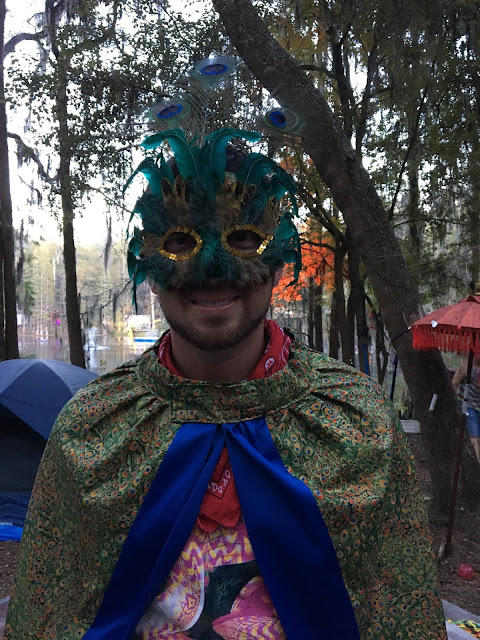 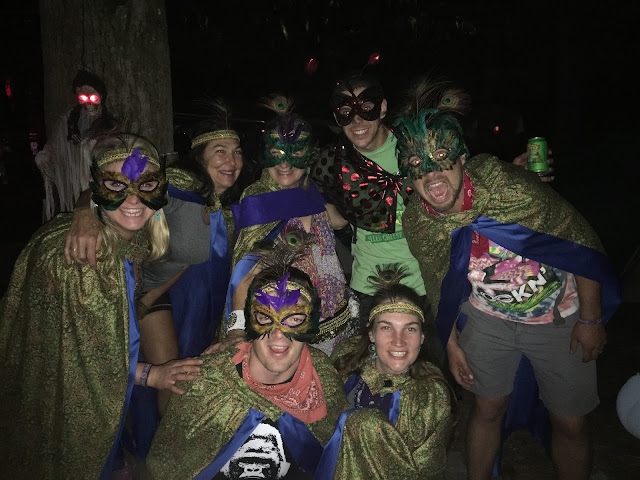 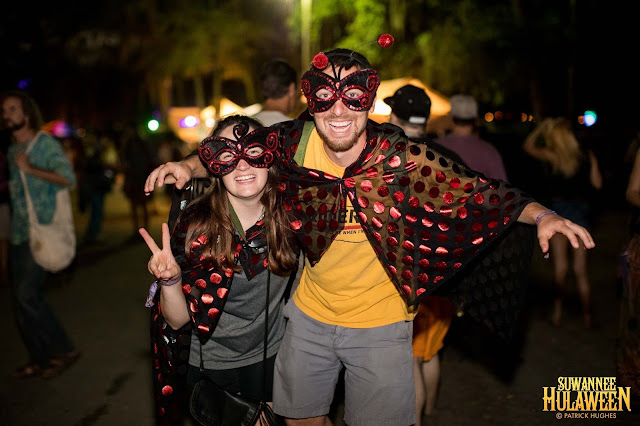 The port-o-john scene is still pretty rough.  Not that anyone wants to see what's in there, but really, even just a low-level light would be helpful late at night when you can't find the latch to let you back out.  And I'm not a fan of showering at festivals, even when folks come out in their flip-flops looking shiny and carrying their rolled-up towels saying, "Oh, that felt great."  I know better.  The water is cold; there is no place o set your clean clothes to keep them dry and I know just enough about microorganisms to shudder at the thought of enclosing myself in a sloppy, hairy plastic compartment recently visited by a large number of filthy people.  I've got my own system down with a small tub of water, a scrub brush and Dr. Bronner's for clean feet to sleep in and then a refreshing sponge bath in the morning and sometimes again, late afternoon when I also brush my teeth.  That's it.  No frills camping, but completely do-able.

Beer cups have largely been replaced with reusable steel cups, eliminating a good deal of the rubbish that accumulates within hordes of drunk people. Trash pickup initiatives are more prevalent.  Recycling and garbage bags are generally distributed along with the entry wristbands.

This festival was an art and music festival set in a lovely wooded park with Spanish moss hanging from the trees, with purple, red and silver light shows flickering across the campground and inviting one to easily see the spirits in the soft air crossing Spirit Lake.  The days were warm enough that the clear river was an inviting bath to wash the dust from dancing and racing around. 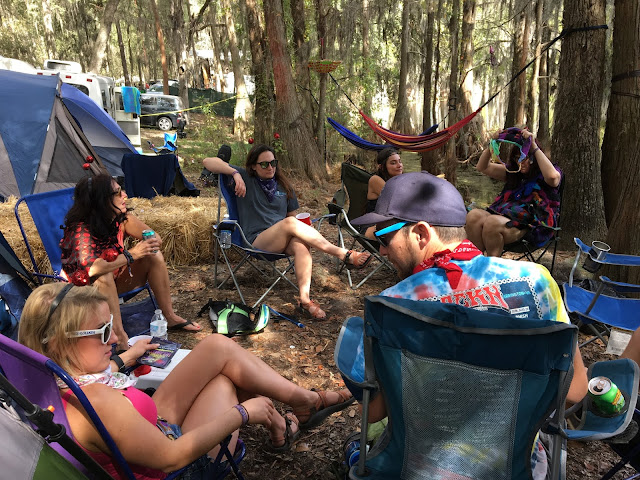 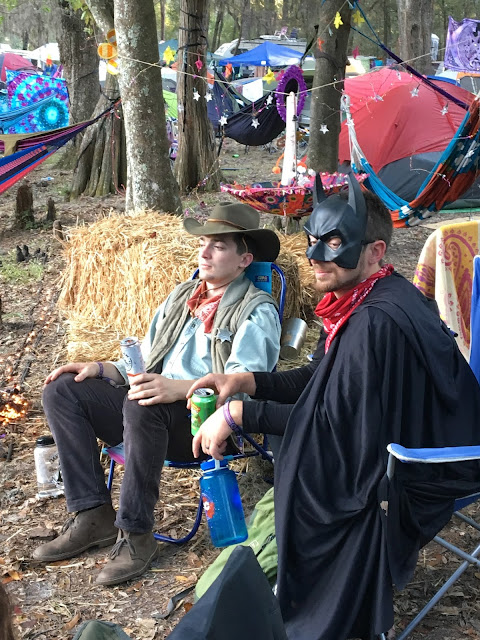 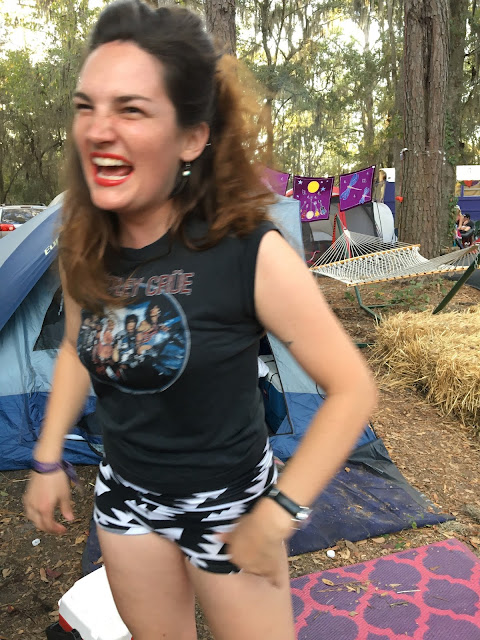 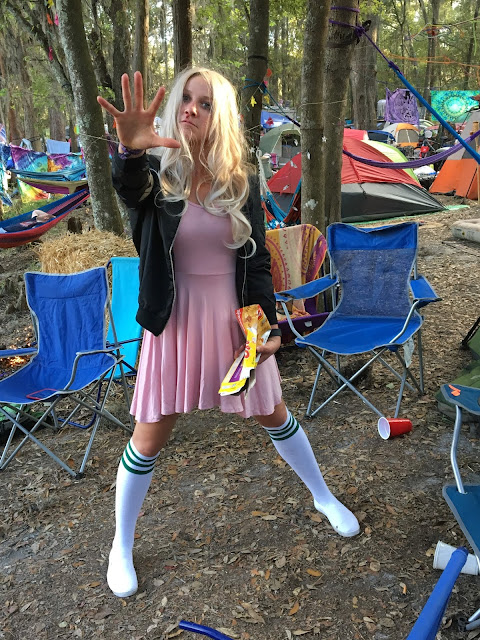 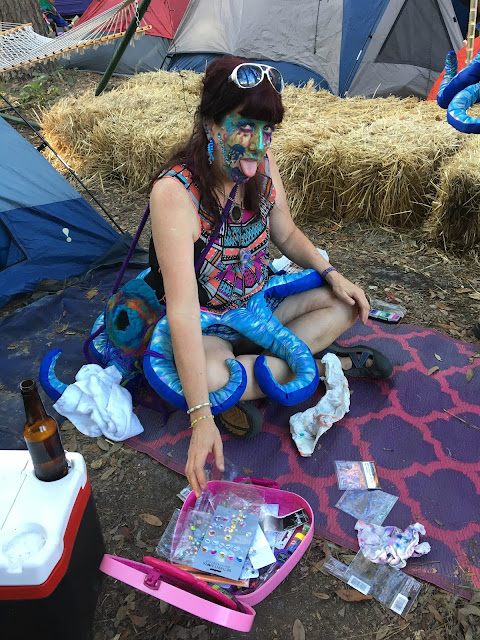 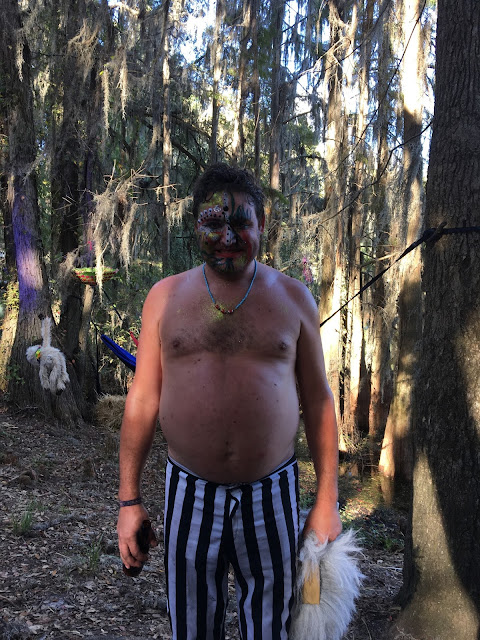 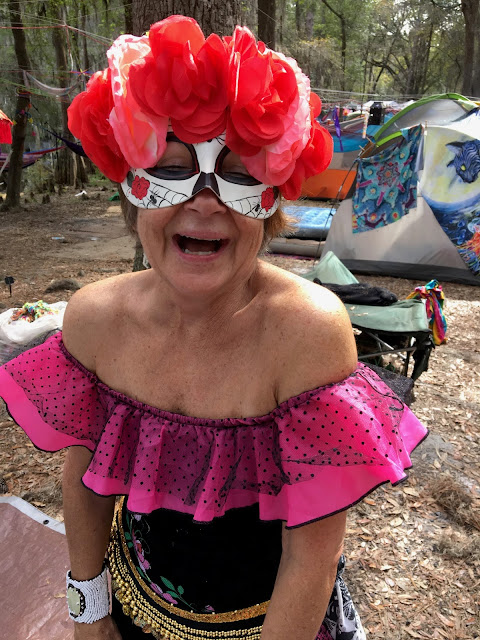 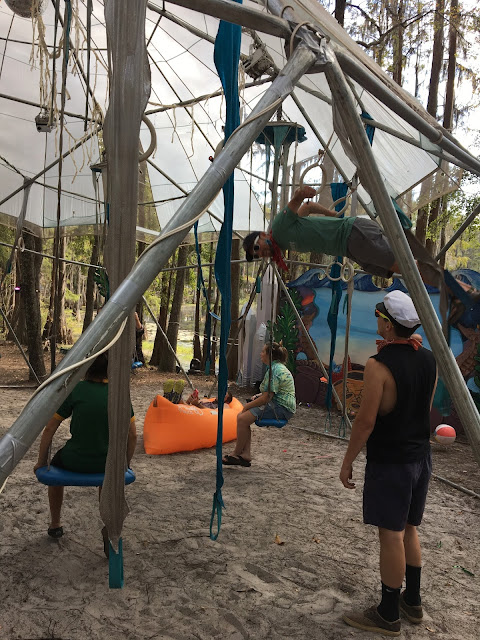 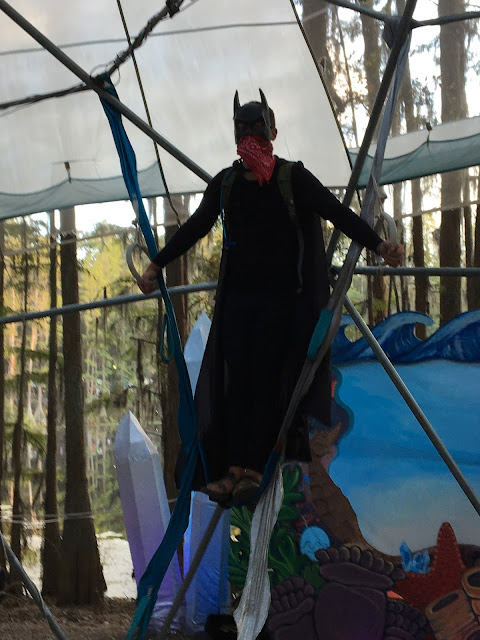 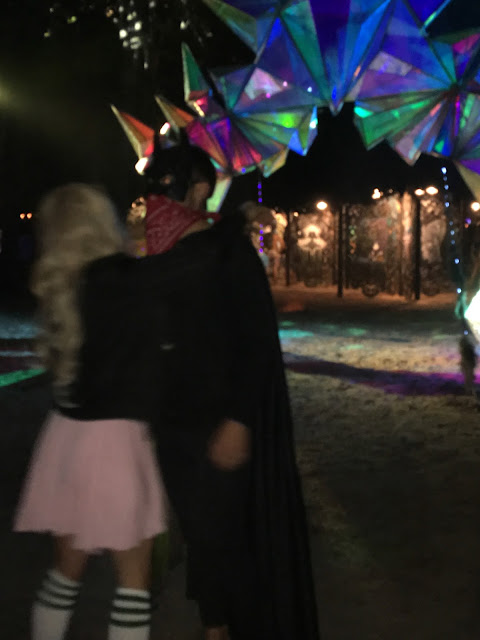 And there was indeed dancing and running around.  What do you do after all when a ladybug is chasing you? The icing on my birthday cake was that it was also a costume festival.  In our daily lives, as you know we have created a psyche to complement our physical presence... and we maintain it within a set of parameters that keep us from standing out enough to get in trouble at work or with the law or our siblings or whoever.  We routinely exclude from our repertoire socially unacceptable behavior like squawking like an unrestrained peacock in the grocery story or violently flapping our arms as though they are wings and trying to alight from the sidewalk like a raven.  But at a costume festival, just a mere scrap of fabric and a feather eye mask can free the most timid soul and unleash oceans of giggles.  And there were four days of this nonsense.  Anyone who felt like it could dress up any way they pleased at any time.  There was an 80s theme for one night, though no one seemed to know what night that was.

I typically dress colorfully at festivals anyway.  As do many of my favorite camping buddies.  But this time as we were traveling in a clan...I generally arrive solo, but was blessed on this epic journey with the company of all of my stateside kids, a very merry bunch...I made costumes for the clan - as you may have divined from earlier references one night a pack of peacocks, another night a squadron of lady bugs.  We each packed other costumes, masks, paints and I found odd accoutrements like feather head dresses, soap bubbles, peel-on tattoos and plastic sunglasses stuffed in with the tequila, beer, juice and Cheez-its, just in case....

Apart from the very cool sculptures, some huge and fire-breathing and the captivating art mazes and galleries, there were places to hang out and play, like a large Nite-Brite sculpture, a canopied swing and trapeze and ring and bar equipment. Batman could fly across the skies! The layout from one music venue to the next and back to our campground was through a more or less electric forest, with new wonders to be discovered on each trip through.  How was there roiling fire at the top of the small dome tents where folks danced Native American-like to the beat of drums? I heard there was a terrifying Halloween path, but no one could remember where exactly it was. 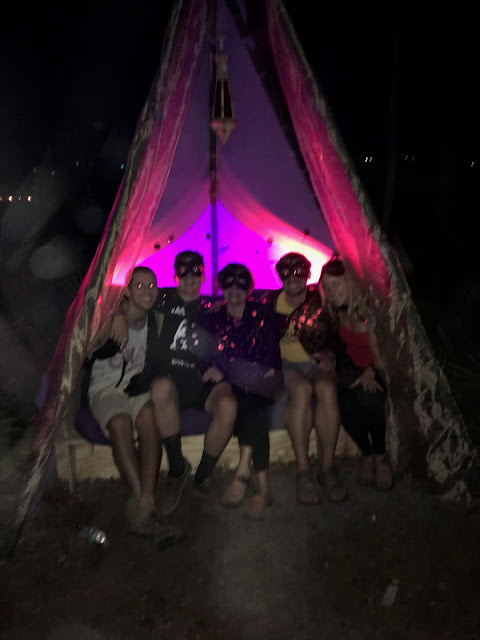 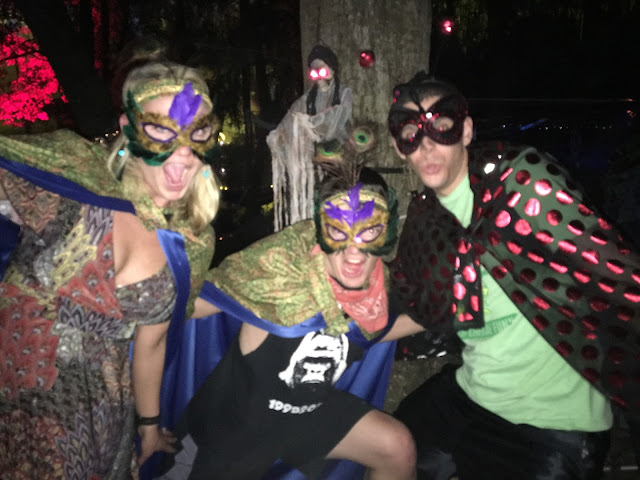 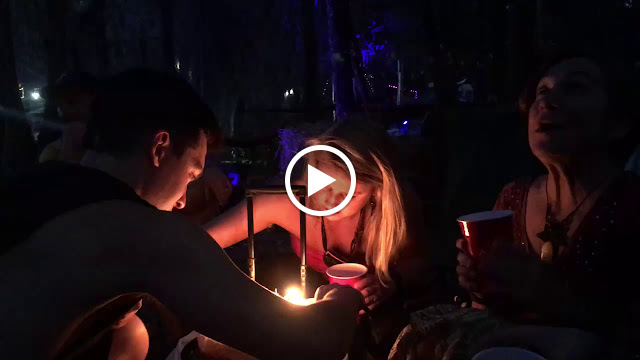 What set this festival apart as well was its participation in the progression toward presenting several sets of the most popular artists.  This keeps things upbeat. Rather than disappointment setting in after an awaited-for performance is over, there is merely a happy anticipation of doing it all over again pretty soon.  And this is very real.  Often festival-goers are very loyal to the festival, which often features a particular band each year, along with a host of surprises and they know a year in advance that they will be going to next year's if it's held. In fact, there are typically acknowledgments expressed several times among friends on the last day of the festival, usually a Sunday, that everyone will be meeting back there again. There is always a let-down at the end of the festival.  Everyone knows sadly that re-entry into the workaday world is painful. But there is next year and hopefully in the near future, the next musical performance on the calendar. Concerning the festival coming around again, alumni often subscribe to an email list and keep an eye open for when the tickets go on sale as they are less expensive at the beginning and many festivals sell out in short order. The liberation offered by music is a sought-after solace.  I am more than anything at these festivals, a dancer, preferring to lose myself in motion and music over any other diversion.  So the schedule at Hulaween was lovely in my way of thinking, both in that it offered several sets of String Cheese and Umphrees and that the schedule allowed music playing deep into the night.  Bluegrass at three until four a.m., shimmying the body loosely through the ethos and laughing at the excellence of the music makes for happy dreams. 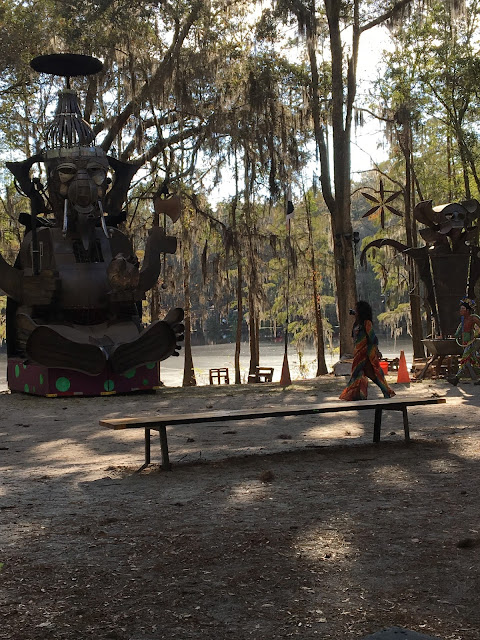 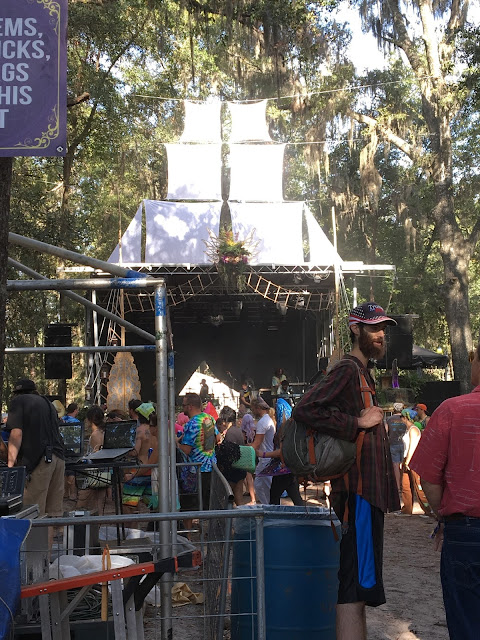 The venue for this festival was also quite extraordinary and we counted ourselves ridiculously lucky for the temperate, sun-splashed days and warmish nights.  Festivals can be very trying in pouring rain or unrelenting sun.  We had neither.  The festival was relatively small and expensive, which weeds out some of the scarier characters that can show up in a large crowd. I was a little uneasy as I had only been to smaller festivals at this venue and couldn't picture it sustaining the number anticipated and yet it did, comfortably.  And it still had all the usual vendors, talented craftsmen and good cooks, some offering fair-trade coffee and local farm fare.  There was also a craft beer offering.  Some festivals are a little better than others with the selections they offer, an effort in progress, but it does reflect progress.

We arrived at Hulaween the afternoon after a laughter-filled evening in Asheville, having fancy drinks on a rooftop bar at sunset, tasting beers at the Funkatorium, a sweet microbrewery while a John Hartford cover band played, ordering amazing tacos at White Duck Tacos, making in to a Halloween comedy bus tour just before it started, laughing until our sides hurt, afterward sharing another beer with folks we met, and then ubering back to our airbnb lodging.