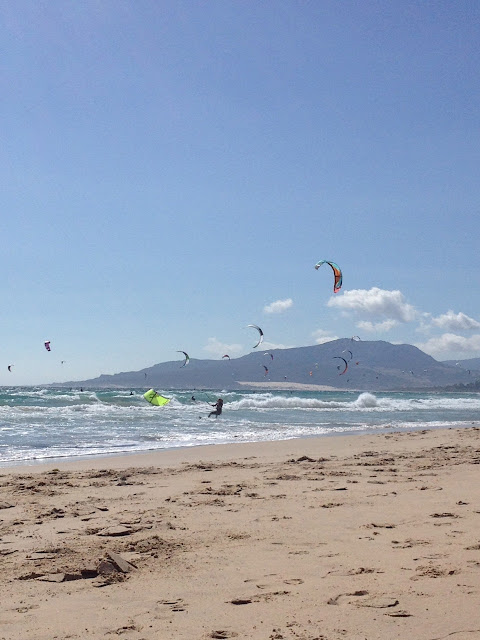 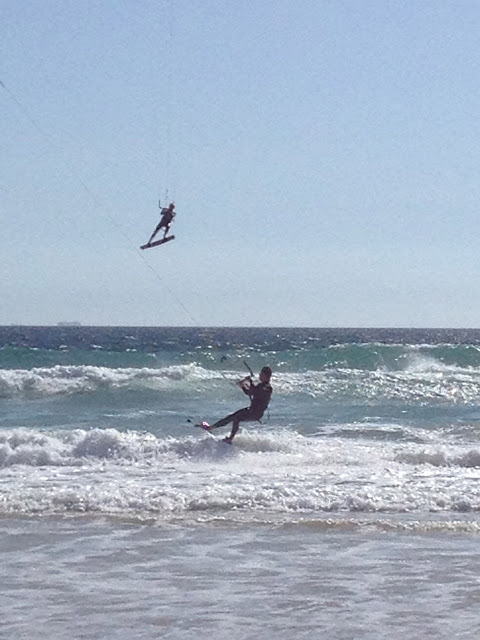 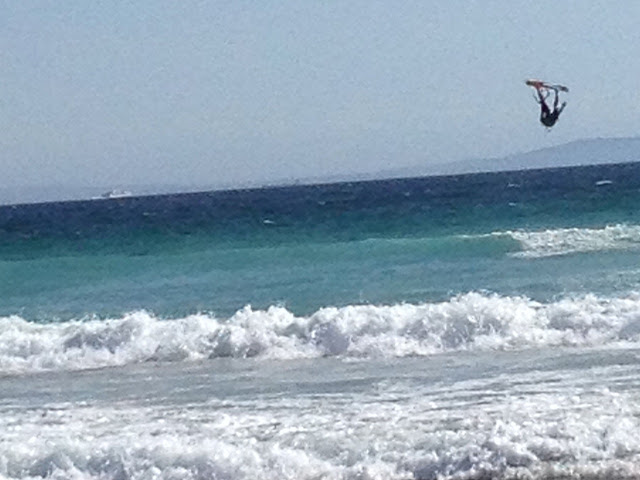 “I wouldn’t go to Tanger.”  The guitar player’s tone was ominous.

Oliver had been huddled in his hoodie on the beach, trying to turn his back to the strong cold winds, but they hit from every direction.  His hands were blue. The kite surfers were seemingly oblivious to the chill: flying on their boards, steering the reigns to colorful nylon sails, flipping mid-air, landing on the crest of a wave and skating along it until flying up again or alas, tumbling into the water.  There were so many that they just barely missed each other.  Fascinated, he had been watching for almost two hours but now he had to find a bathroom and he wanted to thaw his sandaled feet.  Heading toward the line of beachfront restaurants, he heard live music, so he veered toward what turned out to be a grand opening.  They were serving gourmet appetizers, including a number of fresh fish delicacies and homemade mojitos, all for free.  Ollie took a deep breath.  What a wonderful life.

“Trust me,” the guitar player was saying. “I’ve lived here for twenty years.  It’s dangerous.  And there is nothing there you want to see.”

But the lyric to the Bob Dylan song, “If you see her, say hello; she might be in Tangier” had played for so many years in Ollie’s head that now that he could see across the Strait of Gibralter, he wasn’t changing his plans.  Still he smiled agreeably to the guitar player as he gazed out beyond the causeway separating the Mediterranean Sea and the Atlantic Ocean. The African continent beckoned.

While he had still been playing, the musician’s mother, visiting from Australia gossiped with Ollie.  The female singer had been living with her son for ten years and just suddenly left him and moved in with a new boyfriend.  Her son was devastated, though his mother didn’t see why.  Oliver found the singer very sexy, but he just nodded as he listened to the woman.  Though Ollie knew his assessment was unfair, very unBuddhist, this backstory had made the guitar player a rather pathetic figure to Ollie and diminished his credibility as well.

“You will be robbed.  If not murdered,” he added with emphasis.  “The coppers are French and they just look the other way.”

Finally he said, “Alright, if you are going, I’ll go with you.  At least I speak Spanish.”

Oliver was not expecting this twist.  “Don’t they speak French?  Or Arabic?”

The guitar player ignored Ollie’s queries.  “I can handle an attack.  I’m a black belt.” He whipped out a switchblade from the pocket of his jeans.

Oliver eyed him skeptically.  He was rather old and thin and looked like he hadn’t slept in weeks or perhaps just had a nasty hangover.  At any rate, he did not look anything like Chuck Norris.  And Oliver did not recall even Walker, Texas Ranger pulling out a switch blade in a tight pinch.  He glanced at the girl again.  Perhaps she had realized that her former beau was unhinged.  That could explain why she hadn’t revealed her plans in advance.

“I’m coming,” he announced with finality.  “Which ferry are you taking?”

“The cheapest one that leaves around eleven tomorrow morning,” answered Oliver, resolving to himself to catch the earliest one at nine.

The rest of the band had trickled back up to the stage and the musician stood up to join them.

During the next set, Oliver ate and drank as much as he could while listening to the mother and her husband relay amusing stories.  During the last song, he got up and headed toward the port-o-john at the edge of the property.  From there he kept on going and didn’t look back.

His six-bunk room was cluttered with backpacks and kite-surfing gear bags.  He stripped, grabbed his towel and carefully picked his way across the room toward the sopping bathroom.

“Doesn’t look like you got any mosquito bites last night,” a female voice observed.

Oliver quickly wrapped his towel around his waist and turned back.  He hadn’t seen her lying in the upper bunk, hugging the wall.  She sat up, swinging her legs down from the edge of the bunk.  She looked older than his other roommates, maybe in her thirties.  Her face was red and puffy, with pustulent bites scattered from her neck to her hairline.  She pointed toward a hole in the screen.  “They flew right over you and feasted on me.  Why do you suppose?”

Oliver shrugged.  Her unblinking stare was creeping him out.  Was she flirting?

“I can’t imagine,” he answered.

“You’re not a kite surfer either.”  If she perceived the slight, she chose to ignore it, instead further imploring.

“No,” replied Oliver curtly, closing the bathroom door behind him.  He turned the lock, but it just spun around.

“The lock doesn’t work,” she piped up cheerily.

Oliver had left his soap on the bed.

“Damn,” he muttered.  How was he going to fend off murderous thieves when he couldn’t even take this woman’s gaze?