Understanding those I live with 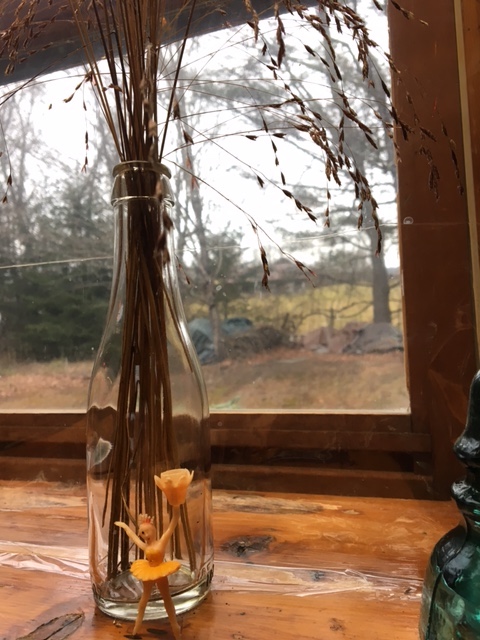 There was a very bad smell coming from under one of my kitchen cupboards.  Yes, under it.  So I bent a coat hanger and contorted my arm and squeezed it under the dishwasher and got an angle to pull out a substantial nest, and three little dead mice buried in it with this dancing fairy.  Did their mother put it there?


I live in a log cabin in the forest.  Sometimes the inside is not remarkably different from the outside. There are many creatures who can slide through a chink between the logs, nibble through a doorway, or slither through a loose window frame.  I don't know exactly what these creatures do when I am gone.  I do know they build communities.  There is seldom a stray insect for example.  There is either no member of a species or many generations quickly replicating.  I'm sure the wasps zoom across the room once they've weaseled through the window frame, realize there are high ceilings and fresh air, few predators and plenty of food, and they immediately call in all their buddies for miles around.

And who wouldn't come to the party?  Right now I've got the makings for s'mores in one of the cupboards.  The lid to the graham cracker box won't close and the marshmallow bags and chocolate wrappers are just thin plastic and foil.  An enterprising mouse can be counted on to open the fare to the rest of the gang.

I think every creature loves sugar and can figure a way to get into the loose paper sugar bag.

So when I come home, usually at the end of a week of being gone and after darkness has descended, I am cagey about where I step until I get the light turned on. Lately it has just been been a couple hundred dead ladybugs each week, a scattering of stink bug corpses and a couple slow wasps trying to make it across the floor.  Most of the activity has taken place near the picture window, but there are other more inexplicable pockets about the house I will find later.

This weekend there was a battalion of stink bugs.  If you've ever heard a stink bug fly and especially when it's aiming right for your head against the pillow, one alone can sound like a battalion.  There really was a ridiculous number of aviators zipping about the rooms this weekend.


Stink bugs are pretty much loners, but this weekend as I said there were a lot of them, waltzing across the rim of the light shades, searching the sink for water, climbing through the thickets of rosemary and thyme in their pots on the window sill.  It took up a good deal of my time, catching them and escorting the stink bugs out.  And I am sure you are aware this is a task fraught with danger.  They can quickly become more nervous than the occasion calls for.


It's odd too how you can get rid of absolutely every one, and three more simply appear.  From where?


So stink bugs are pretty much loners, exploring worlds on their own.

But today there is a good deal of weird activity up and down the plastic on the window frame in my bedroom.  I taped up plastic to temper the cold northern wind.

Today it is warm and stink bugs are crawling on both sides of it.  Just a few on each side, but it's weird, there seems to be a longing in their impossible nearness.

Sometimes I find them in odd places.  I wonder how they possibly found there way there and way down at the bottom.  How long had they been there? Years?

It always sheds a light into their wishes.  I was startled that a stink bug had made it so deep in to the bag where I keep ribbon.  But impressed.  If I were to choose a cool place to hang out, it would be in the bag of ribbon. 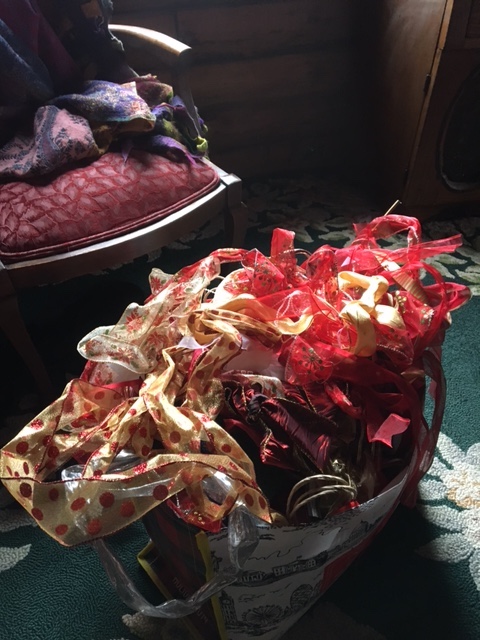 I found another in a box of old hats I had not opened for years.  And I got it.  The hats were from Aunt Milly in the forties.  Check them out.  Wouldn't you hang out with these hats awhile? 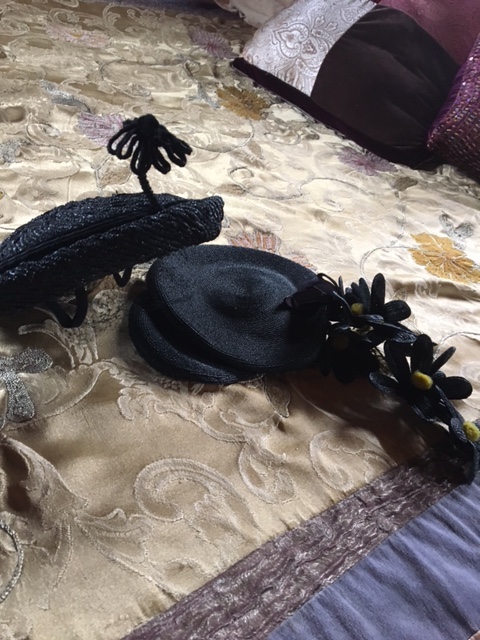 There's got to be a good vibe they can feel.  There is no question she had a good time wearing those.

As for lady bugs, in addition to the dead, there are quite a few live ones this weekend.  There is one crawling on my leg now.  I do not feel sentimental about the sensation and if it doesn't leave, I will go outside again to the front porch, though it is cold and damp and I only have tight running shorts on. I will not be running in this chilly rain.  In fact, I may just put a little whiskey in that eggnog and work the creaks out to music in the warm cabin.

Lady bugs have been part of our lives for a long time.  Someone told me once that Virginia Tech (they have an agriculture program) released them for a particular purpose, but the population got out of hand.  They are great aphid eaters and so wonderful for the garden.  But here, they arrive in swarm at the end of October, which is the end of the growing season, so it's not a big help.  The populations have been diminishing as a few years back they came in the thousands.  I tried once to let them winter over in a burlap in a bucket in the stalls, but I have too many projects and don't recall why that was not a resounding and perpetuating success.  It probably went the way of the pallets and pallets of seedlings I couldn't get home in time to water.

I probably posted this before as it is a cool photo of two of my kids recently chillin' as ladybugs.  Now you have some context.  We do try to understand those around us. 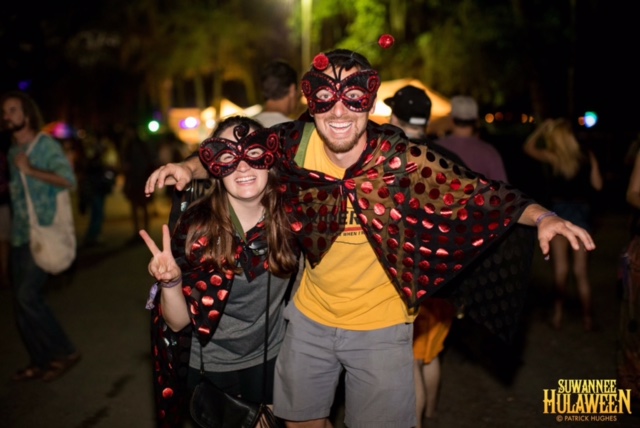 I am going to write a piece today on my rentingtheveil website.  I think it will be about auric levels.