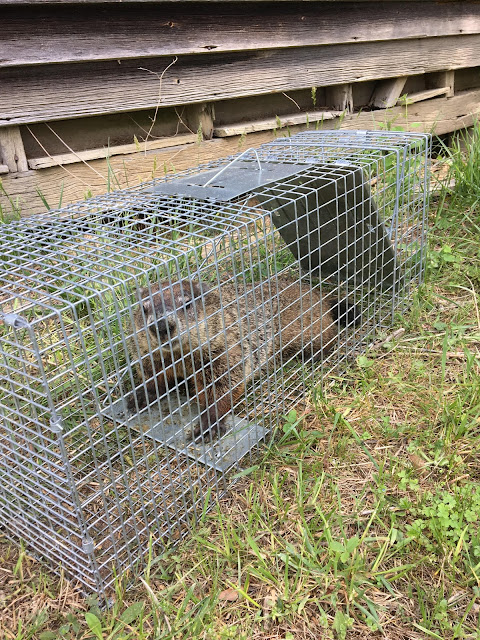 It's hard to go nuts planting my garden with all these whistle pigs clambering up their amazingly well-engineered tunnels strategically placed for a quick trip to fresh squash, greens and yes, even tasty flowers.

The best thing about this project, the kooky and extreme but largely fruitless measures I have taken to persuade the groundhogs to relocate is learning that they are called "whistle pigs."  This guy did not whistle at me as I was carrying the heavy cage to my car.  I placed a towel over the cage so everything on the way down the country lane didn't freak him.

Nor did he whistle when he saw his cool new home.  I think he was pleased with the possibilities it offered though. I could see it in his eyes as he surveyed what was around him.  Really beautiful landscape with small hills, a brook and bordered by woods.  A whistle would have been cool, showing a little appreciation for my efforts.

Despite loading up the trap a number of times, there was a long interval since the other one I caught. I began to wonder if there was some invisible and indelible warning surrounding the trap?

If anyone marked it though, it would have been the opossum I didn't want to trap.  He was super upset and got me to wondering what I would do if a skunk gets in there.  I still don't know, so I hope it doesn't happen.

Knowing the remaining ones will not feel a pang of conscience about eating everything they like, I have tried to focus on planting more pungent crops until I can successfully relocate at least three or four of these fat little fellows.  Here is the some of the garlic Hannah planted in the Fall.  It is May 8th.  Pretty pumped.  Of course it's early in the season to get too excited. 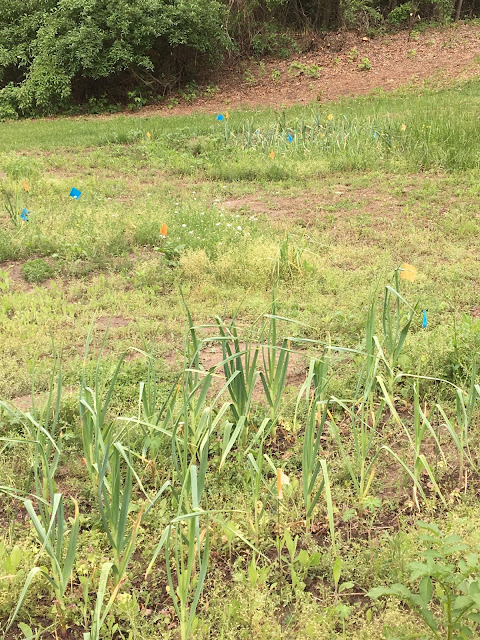 Still,  I am happy to report that there is quite a lot.  Maybe I will have to refine my storage techniques this year. 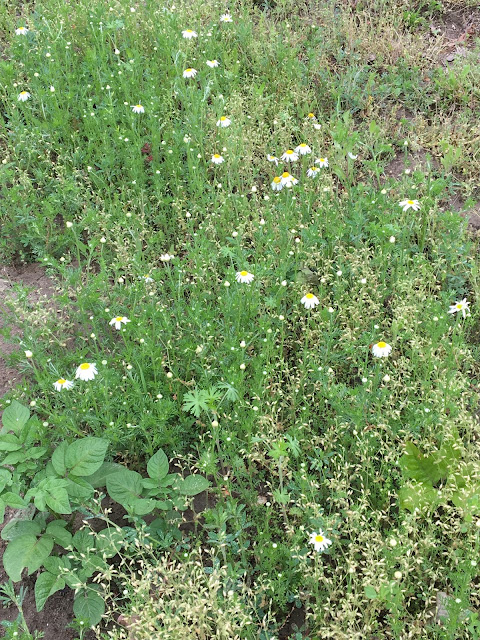 Despite catching a lot of the chamomile up unintentionally during a mad weeding spree awhile back, it is gently spreading through the garden.  I really like vanilla mixed with chamomile for sleeping and am going to try to figure out how to find fresh vanilla beans and make an infusion that stores well and will zonk me out on wintry nights when my mind will not slow down despite the needs of my body.

The potatoes I planted in mid-March are also doing well.  Here is one that may be rooting from last year, not sure.

The onions planted at the same time are also looking good.  I give deep thanks for all of this bounty.  I was able to spread some compost around them a few weeks ago.  This is something I should be doing to more of the garden right now, but it is chilly and damp out and it is warm in the cabin with dynamite music playing.  My garden plot is as sandy as any decent beach. 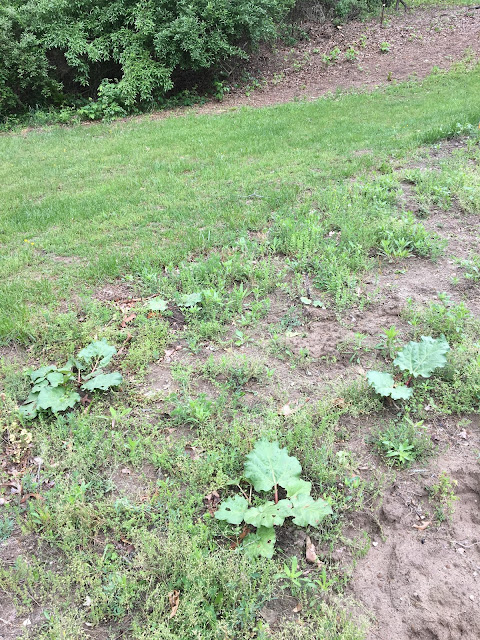 Have already harvested some of the rhubarb for strawberry, rhubarb and cherry pies I made Friday.  It's a perennial meaning that it comes up on its own.  I just have to dig it up every couple years in the Fall and carefully separate the bulbs that have grown together (its root system) and replant them with more space around each to grow.

Something has gone awry with the asparagus, another perennial.  It's got some super creepy and ugly pest problem.  Some life that looks like it was sent by evildoers on another planet.  The cold this week has arrested it a bit, but I suppose I should take measures to make sure it doesn't migrate its progeny to the soil.  This will require some meditation.

I wrote an article on gardening for someone on Upwork who then didn't come up with the money for his request, so I am going to take a look at it, remove superfluous stuff that project required and post it here before it gets too far along in the season.  It's pretty comprehensive as I recall.

It has been so very warm between the typical cool bursts of Spring that it is almost hard to believe it is just May given how far along some of the fruit trees and bushes are.

I am reading a book that is quite interesting about Angela Merkel.  Don't tell me she's not the bomb. 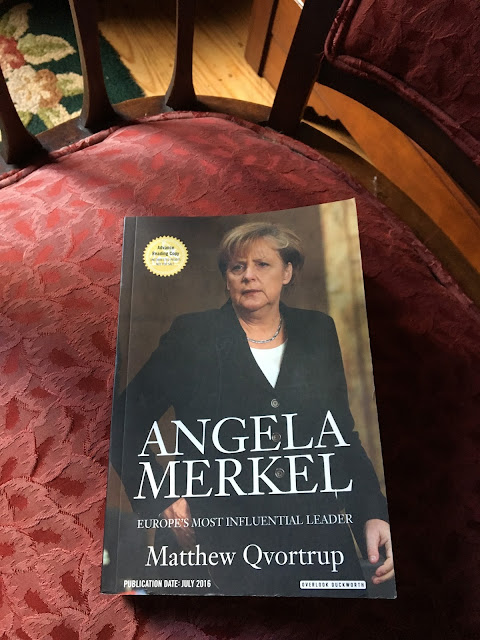 And I have been intimate with Duolingo, a language app downloaded to my iPhone for almost two years now.  I assign myself five modules daily and with few exceptions, meet this goal.  Although I still lack the confidence to engage in conversation, I found that I can vaguely follow along in Austria (though their German vernacular is notably different) and Duolingo tells me that I am now 54% fluent.  That's probably not true, but  I am making progress. I also keep the iHandy translator on my phone and another app with verb forms. Now and then I read some elementary, amusing stories by Andre Klein about some Italian guy who can't find a job, so he goes to Berlin and tries to learn German.  He enjoyed partying more than studying and apparently gives up because checking my Kindle, I see that I downloaded the next one "Plotzlich (suddenly) in Palermo" and probably started it.  In between I read Patti Smith's "M Train" which is a bit of an autobiography and an autobiography or Mother Theresa.  I was hoping the latter would inspire me, I wasn't really touched.

This reminds me that yesterday I watched a youtube video on communication between abstract and concrete thinkers.  While I am not sure it applied in that disconnect, it did give me a language to explain the cerebral loneliness, the emptiness I feel after a lot of interactions.  And a way to bridge it if I want.

So, along with these projects and distractions, working ridiculously long hours at an amazingly tedious job, playing Bob Villa replacing an oven range hood, two porch lights and wallpapering two rooms, which I will NEVER do again and playing full-out farmer (hanging out Saturday morning in line at the John Deere parts store is a marathon exercise in patience), swimming at the Y regularly and attending celebrations, it is probably not a wonder that I have made little progress on a quilt for my son and his wife for their wedding a year and a half ago.  It is  Bridal Wreath quilt with a good deal of appliqueing. 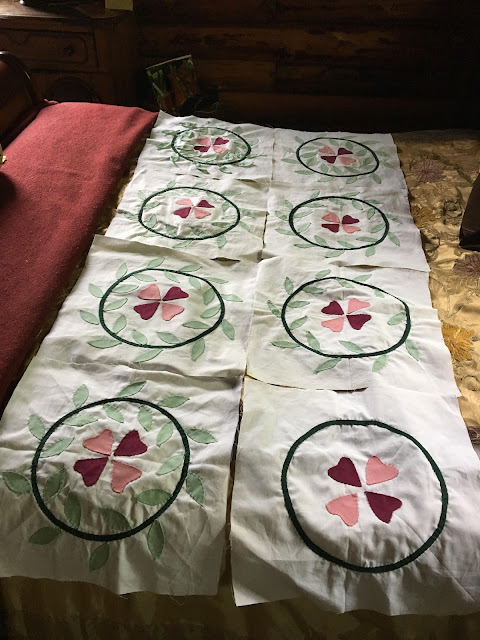 Why are there so many interesting things to do?   Thank you for your attention to the end. I'm off to work on Oliver's Travels Two.  Enjoy the rest of your day!