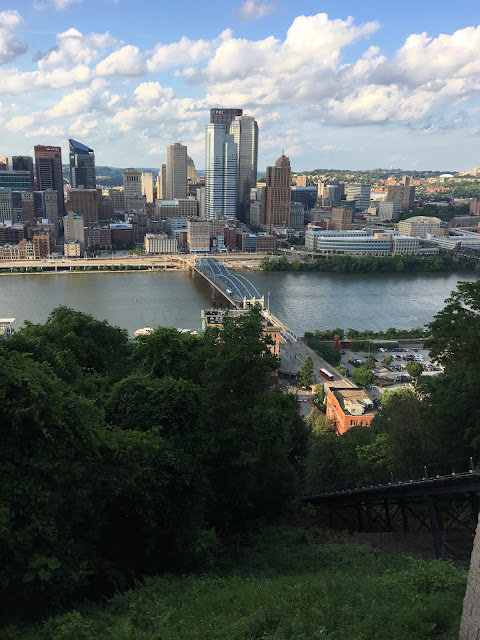 Pittsburgh from Mt. Washington at the top of the incline plane.  Was pretty proud of the family showing we had - the great migration of the Irish across the country - for a get-together in Pittsburgh.  The festivities were downtown, but my nuclear unit stayed at an airbnb in Mt. Washington.  Their general consensus was that none of them had ever seen a city quite like Pittsburgh.  Having grown up in the area, and watched it go through a major economic transition after the steel industry was toppled by competition from Japan, it caused me to look at its quirky splendor with fresh eyes. 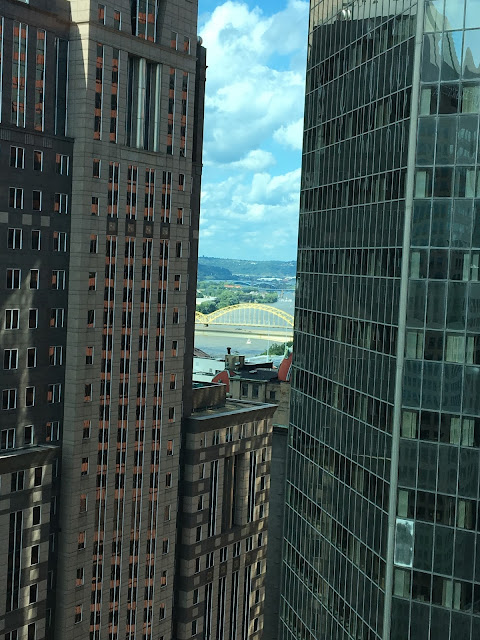 For all of the Uber rides we took, the odds should have been in our favor for catching a driverless Uber.  Our first driver told us there were sixty in the city.  You can't specifically request one, but they were running between the neighborhoods we were terrorizing.  Still, try as we might, not one of us hailed one down.

We became familiar with the yellow Smithfield Bridge from every angle, our beacon back to home base. 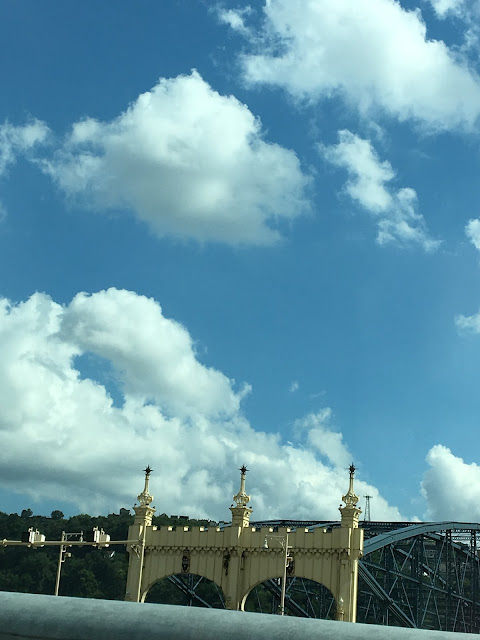 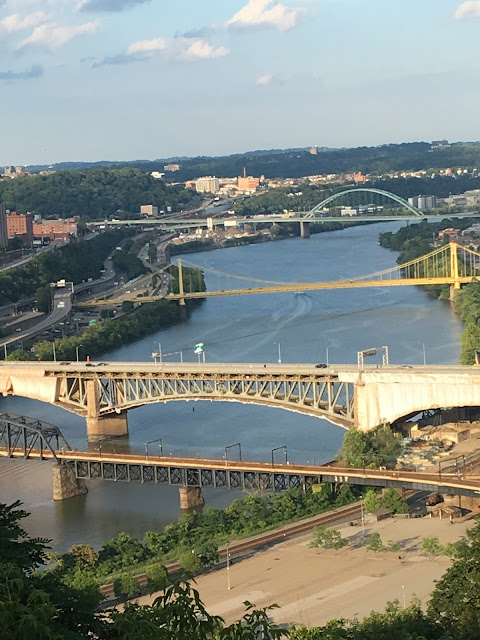 Or actually, which bridge was it? Happy for Uber, driver or driverless in an unfamilar city.  Every one at the soiree, natives and non-natives drove the wrong way at least once trying to find the destination and several simply looped and looped.  Pittsburgh driving is not for the faint of heart.  Direction signs are placed deliberately to deceive. 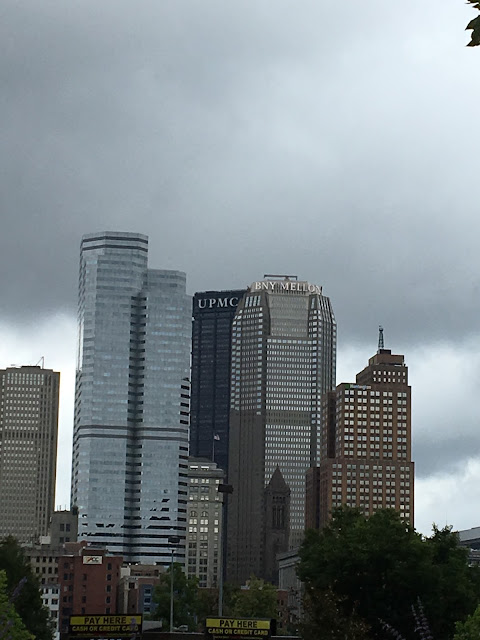 Surely this is the Financial District? Pay Here.  No, pay here.  Mellon Bank.  Founded in 1869. 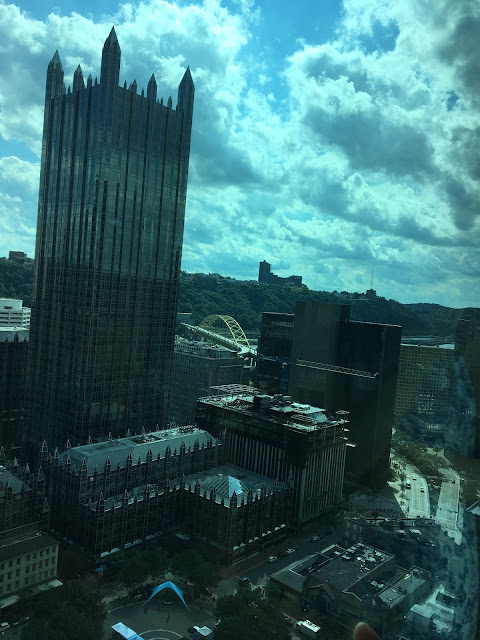 "What is that?" my family asked as we walked past the glass Gothic fortress.

"Oh, that.  That's the PPG Building."  They requested further clarification.
It never occurred to me they wouldn't know that PPG stood for Pittsburgh Plate & Glass.

Behind my back, they were raising their eyebrows.

Familiarity tempers and sometimes even completely obscures the weirdness of things I guess.

I love Pittsburgh's key role in the Industrial Revolution, its steel mills, railroad lines, banking... and felt lucky to get this close-up view of the past. 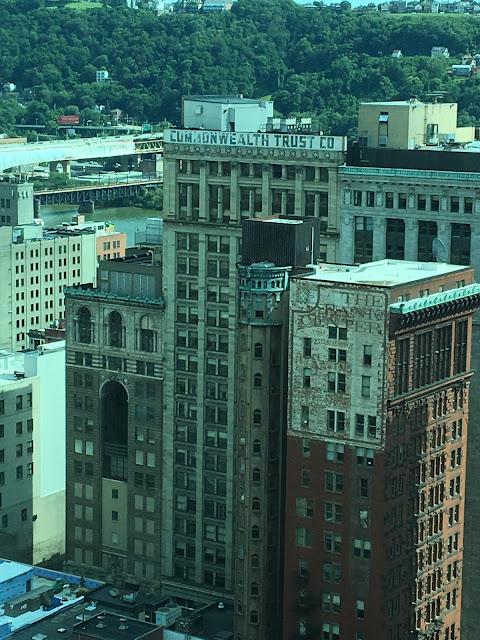 Driving home, we saw the beautiful side of West Virginia.  It's been getting such a bad rap lately for its ubiquitous methamphetamine problem and the environmental destruction caused by its coal mines and oil fracking. 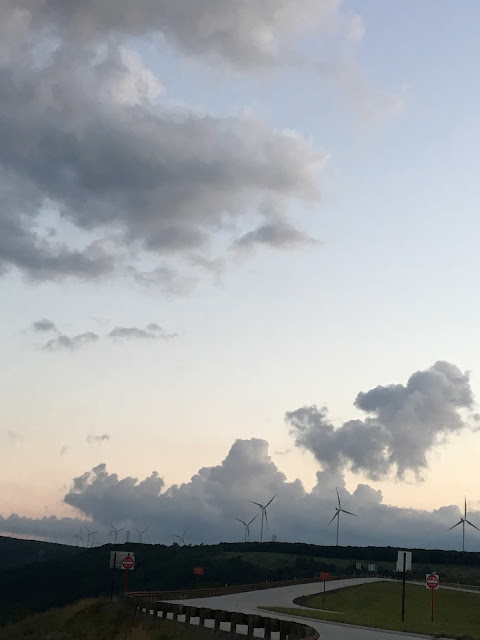 But we saw the upside, gorgeous roads and plenty of investment in wind energy, with roadside scenic view pull-offs perfect for lighting sparklers to celebrate the 4th,  tossing frisbee 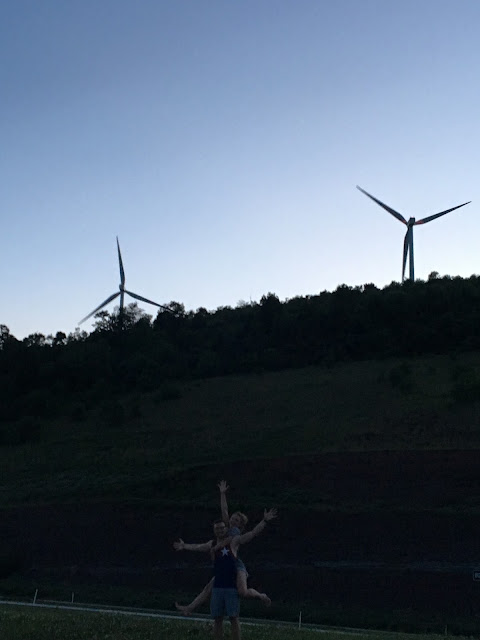