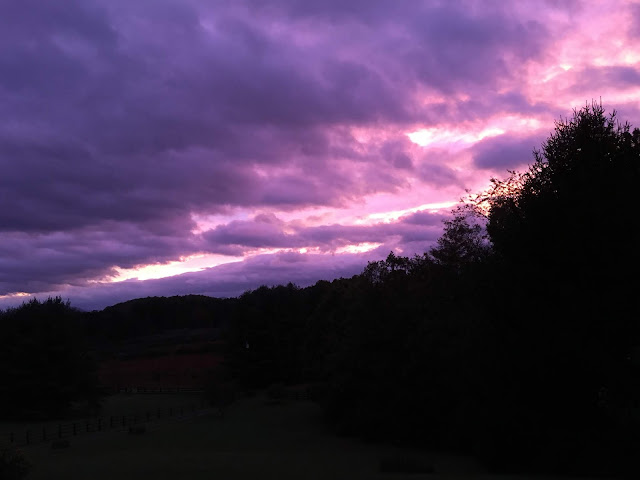 I'm in a political mood this morning for a recluse.  I woke between 2 am and 3 am with a burning idea for an op-ed piece for publication, so off it went to the NY Times around 6 am.  While I didn't find the IUCN compendium of wetlands book yesterday that should have been on the library shelf for this week's assignment, I did find a book on industrial ecology, which described the Life Cycle Assessment tracking the carbon footprint of goods each step along the way from inception or extraction to disposal.  That kindled an explosion of helpless feelings about the recently released UN climate change report and the continued egregious actions of our administration. Thus the op-ed was born.

I am gaining a solid base of understanding of where we are environmentally from the articles I am assigned by Greentumble.  It occurred to me that I have been writing articles for Greentumble weekly for about two years now - is that one hundred articles? and since I routinely trash the past from my laptop, that I should probably try to figure out which ones were my contributions (I am a member of the editorial staff) and list them somewhere.  I'm pretty sure I did this once on this blog in the past, but I have no idea where, so this time I'll use a searchable title.

Here is what I have come up with.  Obviously, it's far fewer than one hundred, but I didn't get much sleep last night and my memory isn't all that long-term, so it will have to do for now.  I'll try to update it a bit more regularly, maybe even create a separate tab. Although sometimes it's overwhelming and depresses me, I am glad for learning about the adverse health effects of plastic bags in the ocean and how they don't break down and aren't recycled and that other countries are far ahead of us in admitting to and taking on the problem.


Luckily, this week I stumbled upon a Billy Collins' poem, Cosmology, its first stanzas eliciting my mischievous grin:

"I never put any stock in that image of the earth
resting on the backs of four elephants
who are standing on a giant sea turtle,
who is in turn supported by an infinite regression
of turtles disappearing into a bottomless forever.
I mean who in their right mind would?

But now that we are on the subject,
my substitute picture would have the earth
with its entire population of people and things
resting on the head of Keith Richards,
who is holding a Marlboro in one hand
and a bottle of Jack Daniel's in the other.

As long as Keith keeps talking about
the influence of the blues on the Rolling Stones,
the earth will continue to spin merrily
and revolve in a timely manner around the sun.