The Legend of the Hoodoos 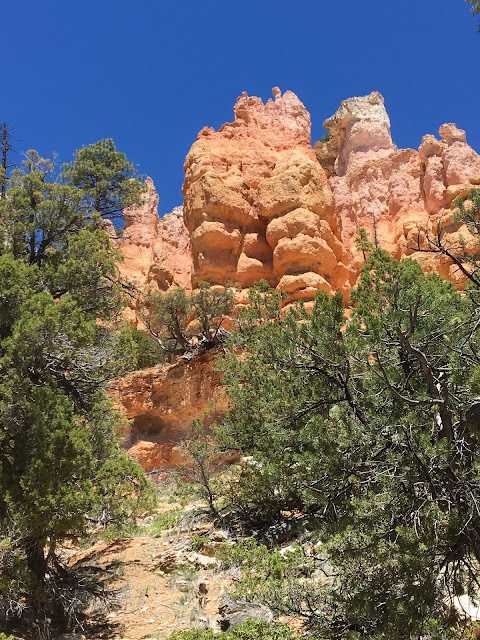 In the year 1220 AD the Paiute Indians lived in the panoramic cliffs and pine woodlands surrounding Bryce Canyon. They lived in harmony with nature. As such they acquired certain skills. They were able to shape shift into condors, mountains lions, dragons. They could create fairy castles with a simple sleight of hand.

As sometimes happens, a group of them became enamored of their own powers, much like the residents of Slytherin Hall…and they formed an evil cult. This cult became known as the Legend People.

Now the Legend People were very selfish. They ate all of the manzanita blossoms in the Spring before they could become pollinated and bear the little apple fruit, a vital source of food for many of the creatures living there.  In the summer the Legend People who were very much aware of their appearances made beautiful clothes, dresses and loin cloths from the deer hides.

Two kinds of deer roam the forests and forage in the grasslands there: the mule deer, a deer with big ears and the pronghorn with the striped shoulders. Now the pronghorn aren’t really deer. Nor are they antelope as some will insist. But they are their own species, remaining from the Ice Age. And they are the second fastest animal on earth after the cheetah. They can run 60 mph and detect motion up to four miles away. They can often be seen browsing at the edge of the forest at dusk.

To augment their colorful costumes, the Legend People chopped off the tails of the darling little Uinta chipmunks and dyed them in the glorious pigments of the canyon.

Now most people don’t realize but even today, it requires 600 gallons of water to make and dye a single t-shirt, so the impact on the canyon was quite dramatic. In the summer the monsoons bring water: torrential rainstorms that blow in and wreak havoc with lightning strikes and boulders tumbling with the forces, but apart from trees, even scrubby juniper blackened from lightning strikes, soon after there is little evidence that a storm has passed through. After only an hour the canyon is dry and everyone is thirsty again.

So the impact on the canyon life of the Legend People using all this water for dying was quite dramatic.

In the Fall, the Legend People ate all of the pine nuts before they could be eaten or disseminated. Bruce Canyon is home to an unassuming little bird, the Clark’s Nutcracker a grey bird with black and white wings and central tail feathers. The Clark’s Nutcracker gathers 100,000 pine nuts and buries them in different locations. The following Spring it goes back to these places and retrieves the seeds to feed its newborn.

Then the Legend People began selling off our national monuments to private interests…Forgive me, I have slipped into the present. It is impossible sometimes not to submit to the time warps in the Canyon.

Any hoodoo, the other Creatures were starving and thirsty. They went to the Legend People time and again, saying, “Look. We just have this one home. We must share her resources We must live sustainably.”

But the Legend People didn’t even seem to hear. They were intent on living the good life now and that trumped all other considerations.

And so finally in desperation the creatures went to Coyote.

Now Coyote is a wise and powerful god. He works through a shift in consciousness and he is still with us today. You can recognize him by the way that he teaches you his lesson. Let’s say for example you have a day where you have a certain deadline you absolutely must meet.

You wake up and you have no internet, which you need. You get in the card to drive to Starbucks for internet and your car won’t start. When you finally get a jump, you are caught in a traffic jam. Your best friend calls you; he is having a meltdown. Your kids need money. And on and on. You are becoming increasingly frustrated. You are def not going to make your deadline. Along the way you have perhaps been treating your loved ones who keep checking in with less respect than they are due and you know that further cascade of problems you have perchance created, awaits.

Then in the evening when your angst is finally beginning to unravel, you realize that in the bigger picture perhaps your deadline was not that important. The bigger picture is starkly visible in Bryce Canyon. You can look into the canyon and see back one hundred million years. You can look up onto the starry skies and…why the keynote speaker from NASA at Bryce’s recent astronomy festival told the audience that NASA is rolling off a new telescope to follow the Hubble: the James Webb. It can see back in time fifteen billion years.  How big is this picture?

She also told us that someone rented the Hubble Telescope for three days focusing it on an ostensibly black space between stars and with time-lapse photography over three days, 5,000 galaxies came into sight. So what aren't we seeing?

There is definitely a bigger picture where the delivery of a report is not significant.

So as I was saying, it is  Coyote behind the scenes egging on a change of your perspective so you see the bigger picture instead. When the creatures approached Coyote, he thought about it a minute and then came up with the perfect idea how to deal with the Legend People.

He invites them all to the canyon for a big banquet. He tells them, “You can eat all you want and dance your moccasins off all night.”

And some of the Legend People showed up wearing only body paint.

Coyote meets them at the rim of the canyon and with hands folded in prayer in front of his heart says, “Welcome Brothers and Sisters. We give deep thanks for each other and for this Earth. To show our respect we are going to learn to live in harmony with the Earth.”

With this he lifted his right arm - some say that he held a throbbing gold wand - and he cast a powerful spell that froze the Legend People. Right where they were standing.

And that is what the hoodoos are. You can see them there in Silent City, on Wall Street and all about the canyon. The hoodoos are the Legend People meditating on becoming one with the Earth as they dissolve into it. 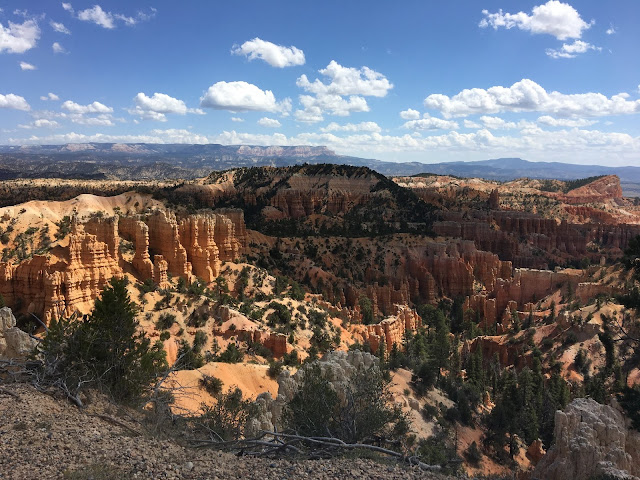 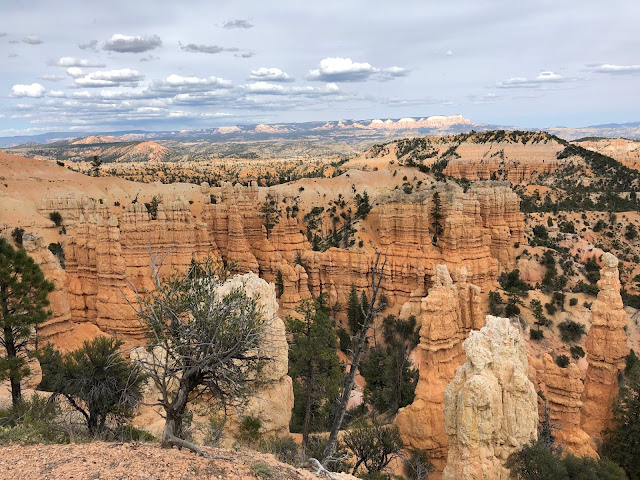 The Paiute Indians referred to the hoodoos as evil creatures with red painted faces. They weren't stupid. They did not hang out in the canyon. At all. A young brave wouldn't even go in on a dare.  Nothing short of a mountain lion hot on his heels could persuade any half-way intelligent Paiute to go into the canyon. Indeed, the surly faces of the hoodoos are a subject deserving consternation.

Now the hoodoos themselves are well known for changing colors. And for their deep saturation of color. Visitors flock to the canyon at sunrise and sunset to watch as the rays of rising or dying sun move across the canyon and the hoodoos light up, sometimes glowing the hollow gold of false idols, sometimes catching the quartz and shimmering the dazzling white of stars and sometimes the soft peach or coral of the sky suddenly ignites the hoodoos into a fiery red.

Clouds passing across the sky during daylight hours play their own tricks, changing the expressions on the faces so that it often seems that a hoodoo has just moved his lips or his eyes.

Nighttime presents no fewer transformations. The silhouettes against the infinitely starry sky gain stature and nobility.

It is not just the hoodoos and their variable expressions that intimidate the Paiutes. You must remember that Coyote froze the entire lifescape of the hoodoos. A visit to Bryce reveals trails into a land of fairy castle and caves that seem like all the world to still be occupied. It is as though they are lived in, heavily used in a dimension just beyond perception, but tangible enough that the sensitive know to be wary. 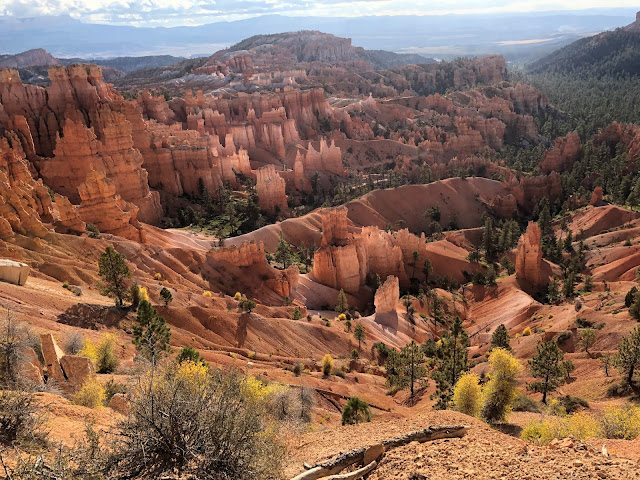 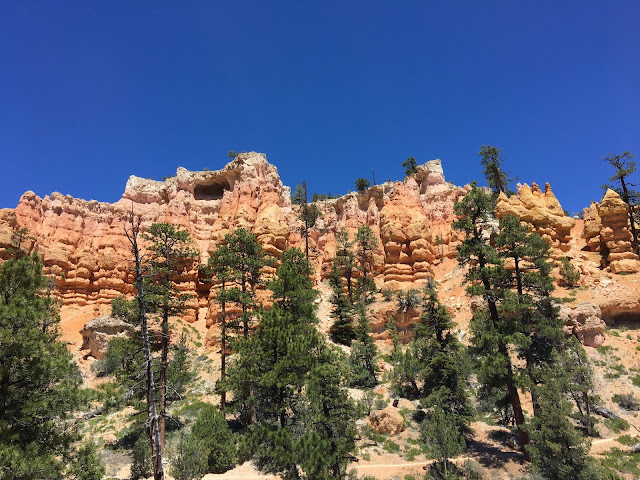 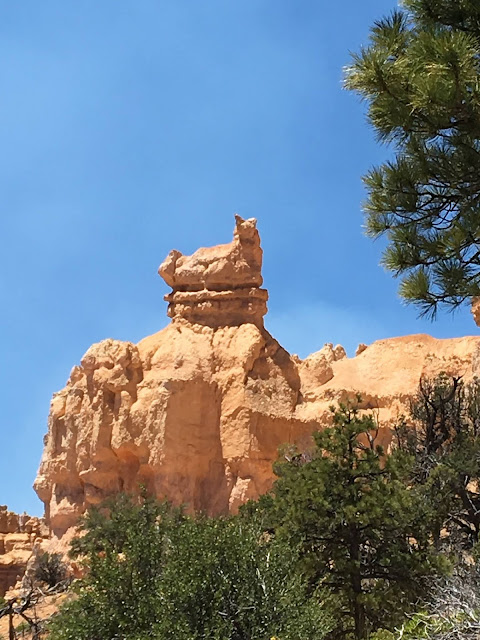 The boulders, the shifting mounds of crystalline sand, the twisted blackened trees, they all seem to have a nearly audible consciousness. And there are the shapeshifting animals and birds: the snakes, the dragons, the vultures and the owls. One moment a geological formation, the next moment, flapping large wings and taking flight, blocking out the sun or suddenly scuttling over a hilltop or sliding around a bend in the trail. 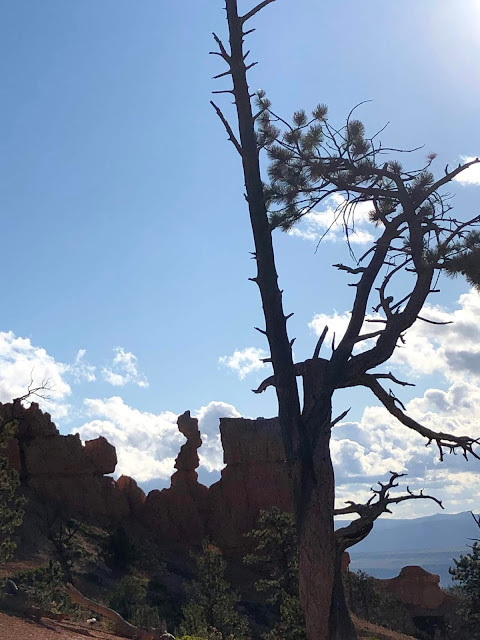 Once one begins truly looking at the trees, a new realm of reality opens. Surviving in the canyon is a lesson in resilience and tenacity. Winds are fierce: whipping hailstones like artillery fire ricocheting through the canyon; bitter winter winds cut skin and churn snowfall into vortices. Merciless blizzards of vortices, their wind screaming through the ages.

Winter is not only brutal, but protracted. I took this photo upon arriving Memorial Day weekend. 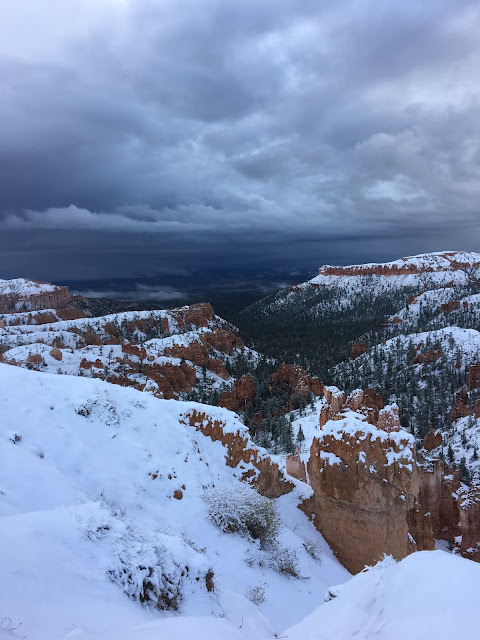 Even summer's warm wet winds blow strong: the ones that hear a rumble and simply form, loosing a monsoon who travels without warning in dark clouds. Clouds not on this morning's radar spread tentacles across the canyon and there is no getting out in time. 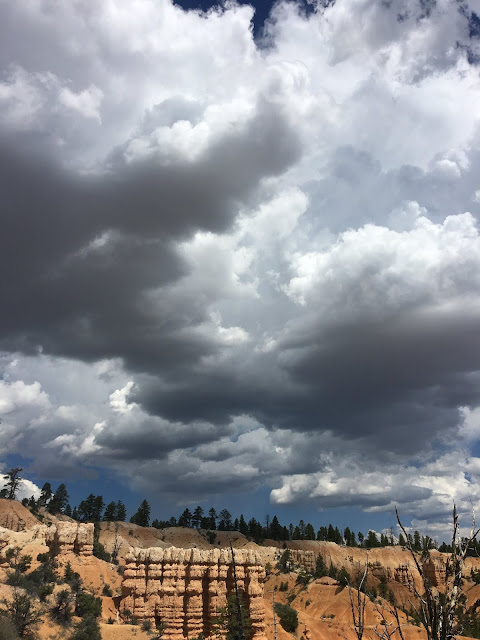 Flashes of lightning crack trees apart. Rain pours rapid currents down the canyon walls, disintegrating trails in minutes. Boulders dislodge, tumble and crash. The pebbly sand barely cradling struggling tree roots cascades. Gravity, wind and rain, but the trees are staying. They balance, edging their roots to stay in the dancer’s frame and keep them hanging on to what soil remains, however tenuously.


They pull their roots up to shield the wind, to protect a neighbor, to refine their balance. Most have been blackened by lightning at least once, even the small scrubby junipers. It is their fate. They embody the spirits of the canyon and only their feistiness allows them to survive. Perhaps it is the same with the hoodoos. The meek do not endure. Only the powerful. Only the evil. 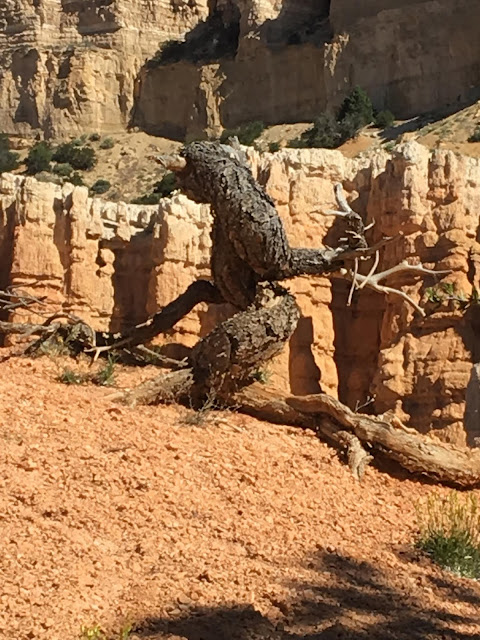 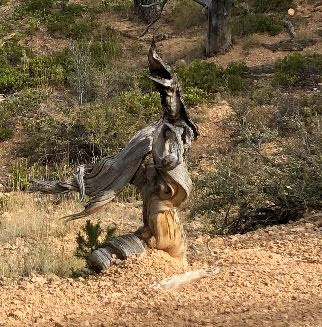 It is not just these uncertainties that intimidated the Paiutes from sojourns into the canyon. There exists one other looming uncertainty in the canyon. Time Warps. It is not uncommon for a traveler to walk through a certain passageway and find herself taking the same steps through the same passage in the same direction an hour or two later with no accounting for the interlude. It has happened to me on several occasions.

Take heed. Hiking in Bryce Canyon is every bit as magical as the trails suggest. 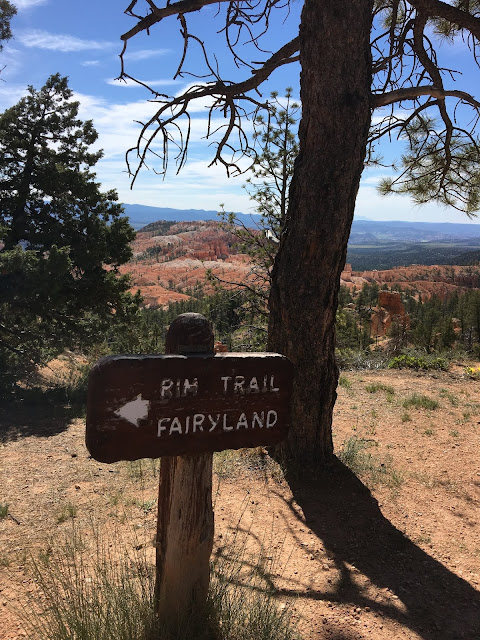 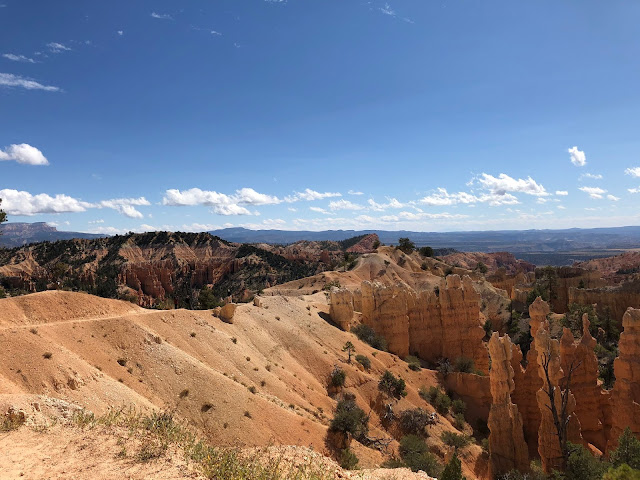 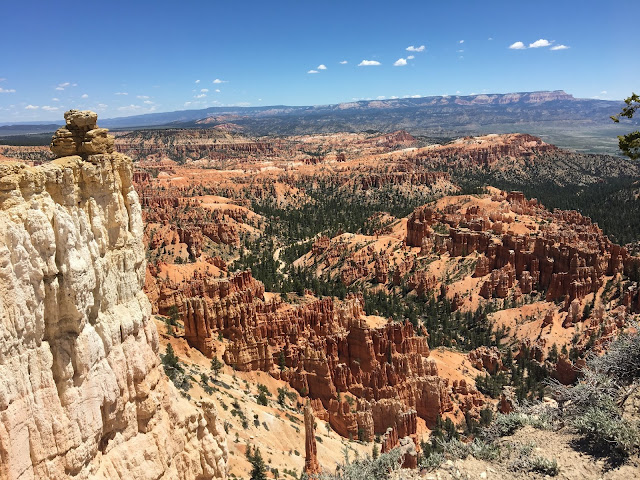