On the Road Day 5 - The Badlands 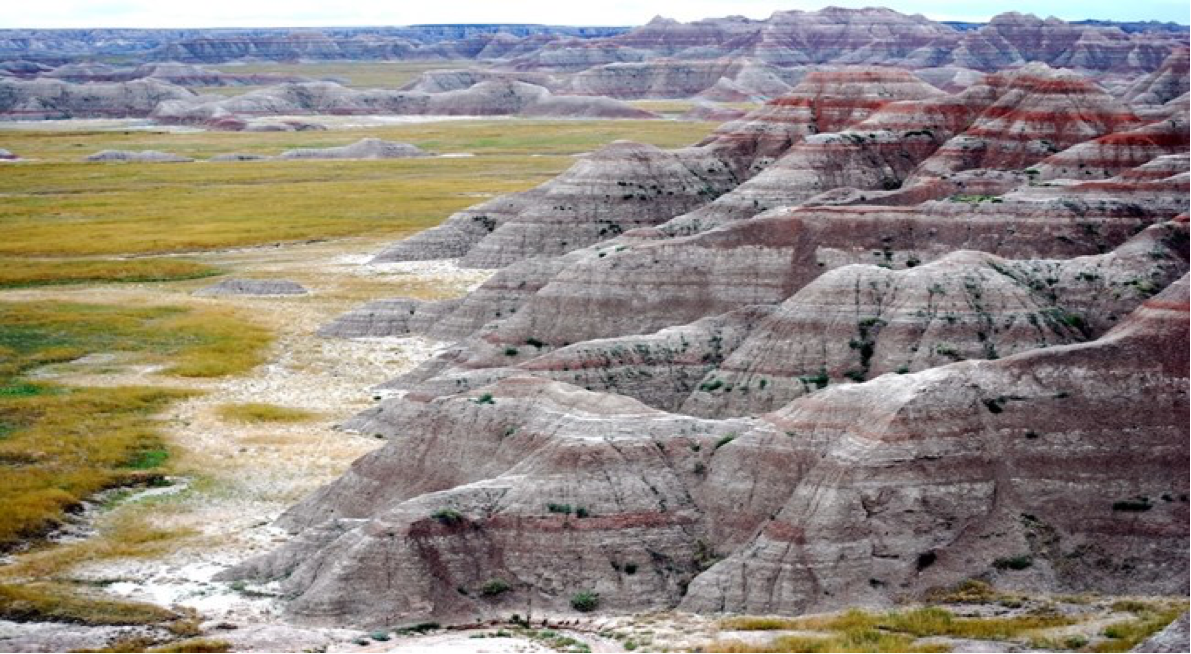 So why is this area called “the badlands?” Is it because, according to the Guardian, the Pandora Papers suggest that South Dakota is “sheltering billions of dollars in wealth linked to individual accused of serious financial crimes?” Is it because bad asses claim these hills? Hordes of unsmiling old men with pointed white goatees, tattoos coating sagging arm skin, and fat bellies pushing against black leather vests rode through the park on their growling motorcycles in noisy formations during my visit, a pit stop en route to the Sturgis Motorcycle Rally. No, it’s because though staggeringly beautiful, the terrain is unwelcoming to travelers, especially the ranges of clastic dikes visible in the third photograph. The rocks are ubiquitous and can be both steep and fragile, making navigating between difficult and deadly. The weather can be brutal: scorching in the summer, with screaming cold winds in the winter. Don’t be fooled by photos of glaring white or dismal grey rocks: their colors change with the shifting light. The soft summer night I visited, rock mounds glowed gold, pale green, shimmering white and mystical coral. But in harsher light, they can look like bleached bones about to claim your own.

The Badlands National Park has three units, two of them on Indian reservations and difficult to access. In considering this, it is important to remember that the mission of our national parks is to preserve “unimpaired the natural and cultural resources and values…for the enjoyment, education and inspiration of this and future generations.”  Sometimes that translates into keeping humans in their fossil-fuel guzzling toys out. One can drive the perimeter of the Park and even hike just about anywhere. The Park is chock full of fossils and may hold some surprises as well. I was impressed that the federal government actually allowed our native Americans to remain in some of our grander terrain, rather than transporting them to more dusty and dismal reservations like the ones that litter the southwest. In fact, the South Unit of the park is held in trust by our federal government for the use and benefit of the Oglala Sioux Tribe. I was impressed that is until I read the caution under the Safety Tips for driving around the South Unit on the Park website: “The area is part of a former bombing range. If you see something like an unexploded ordnance, please report it to the park and do not touch it.” A large portion, 341,726 acres in fact, of the Pine Ridge Reservation was “seized” by the Department of Army for use as a practice bombing range during WWII. The land continued to be used as such from the 1940s through the 1960s. Not sure how creating and maintaining a practice bombing range on reservation lands was justified as a sound fiduciary decision by the trustees.

The White River Visitor Center on the Pine Ridge Reservation looked like it would be an excellent place to learn more about the Lakota heritage there, but it was temporarily closed due to COVID. A good guide to hiking the South Unit by Michael Zimny can be found at https://www.sdpb.org/blogs/arts-and-culture/how-to-hike-the-badlands-south-unit-corner-to-corner/. You can drive the perimeter of the South Unit, but it would make most sense to do it if you are on your way out, heading toward Wind Cave National Park or Mount Rushmore. By the way, if you are heading to Mount Rushmore, I’ve been told again and again that it is well worth the extra time it takes to drive Iron Mountain Road from the south. The good lord willing I’ll make it back to the Badlands soon, but this time I had a different itinerary with an emphasis on avoiding crowds, so I stuck with my original game plan of exploring the North Unit where I had camping reservations and then heading up to the Theodore Roosevelt National Park in North Dakota.

I arrived at my campsite in the Badlands, Number 81, at the edge of the campground, the last one available and in my opinion the very best campsite. It offered unadulterated views of the hills. It was also easy to find in the dark on my way back from the Ranger astronomy program at the amphitheater as I had forgotten my red headlamp. The astronomy program was stellar. The rangers were well-versed, funny and used laser pointers, which proved unbelievably helpful. It was crowded though and even though it was outdoors, that made me nervous in these times of COVID, so I left shortly after the narrative ended and the questions began. Cedar Pass campground was large and packed, but the sites were well-spaced. In the absence of trees for shade, the National Park Service has installed permanent awnings with a back and a roof to cover the picnic tables and serve as a wind barrier, as well as providing shade.

The distance between sites was generous. Potable water was available from taps here and there. The bathroom facilities were relatively clean given the number of people and they have running water. Pay per use showers were also available, but I tend to develop a microorganism phobia in closed damp places and wasn’t feeling dirty enough to give one a try. I’ve got a pretty good system of sponge bathing and Dr. Bronner’s organic peppermint soap was at least providing the illusion of cleanliness. (The orange soap is definitely gentler on the nether regions. They are both all natural and made with essential oils.)

Cedar Pass is conveniently located on the eastern side of the Badlands Loop Road. At the west end is the town of Wall. You can’t miss the huge billboards for Wall Drug. It’s a tourist town where gas prices were notably higher than in the rest of the state. So, I was a bit concerned about my options when my oil light came on while I was driving the Scenic Loop. I was due for an oil change and was grateful to discover that the town of Philip, South Dakota was only forty minutes from my campsite, on my way to Teddy Roosevelt the next day. I called Philip Motor. They had my filter in stock and would change it for a reasonable price late the next morning, which was perfect. In fact, it turned out to be the most pleasant oil change experience I’ve ever had. I hung out watching the Disney channel in the air-conditioned sales room of the car dealership where I could charge my phone and the courteous staff provided me with cold water as well as occasional updates on the progress of my full-service oil change. I was pretty impressed with Disney’s graphics, though not so much with the landfill material toys they shamelessly advertised.

The evening before, after I arrived and staked claim to my campsite, I drove the Badlands Loop Road where my wishes to see mountain sheep, bison, and of course prairie dogs were fulfilled. Although I’d read that bison have mercurial tempers and can suddenly run toward you at 30 miles per hour, I still wasn’t prepared for what running 30 miles per hour looks like. It’s fast. I was probably annoyingly flagrant in my determination to photograph a close-up, but thankfully I didn’t sufficiently perturb any of these guys to charge. 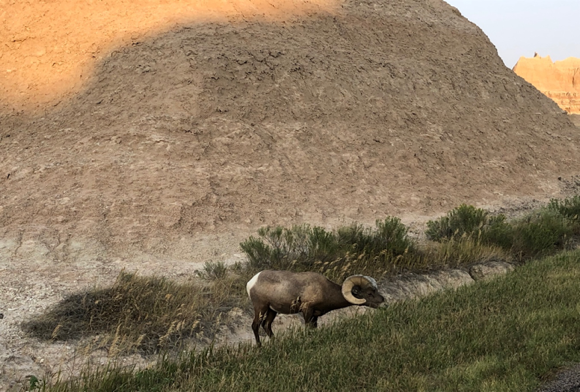 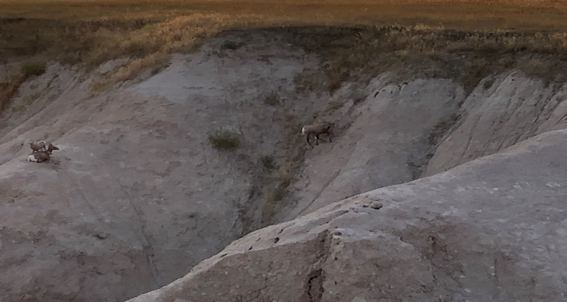 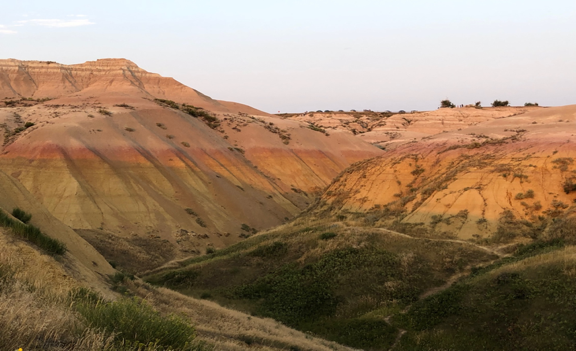 Pronghorn live in the Badlands too, though I didn’t see any. I feel an affection toward pronghorn; they are neither antelope nor deer, but their own species. They can detect movement up to four miles away and run 60 miles per hour! Each year when heavy snows begin falling in the Grand Tetons, the pronghorn there migrate 150 miles to Wyoming’s Upper Green River Basin, making a strong case for wildlife corridors.

The campground was quiet, and I slept well. In the morning I hiked a tough, but interesting trail, the Notch Trail. It even had a steep ladder climb. I also took a couple short, scenic walks just past the Ben Reifel Visitor Center heading toward route 90: the Cliff Shelf Nature Trail, the Window Trail and Door Trail and went a bit down Castle Trail, though I had to turn around to make my oil change appointment. I’d like to take the entire Castle Trail, taking a side trip on the Saddle Pass Trail to see the view over the White River Valley and returning via the Medicine Root Trail. If you’d like to visit, but not camp, cabins are available to rent under the auspice of Cedar Pass Lodge; there is a restaurant open for breakfast, lunch and dinner as well. Although the lodge opened in 1928, the present cabins, built to Gold Level LEED standards were moved onsite in 2013. 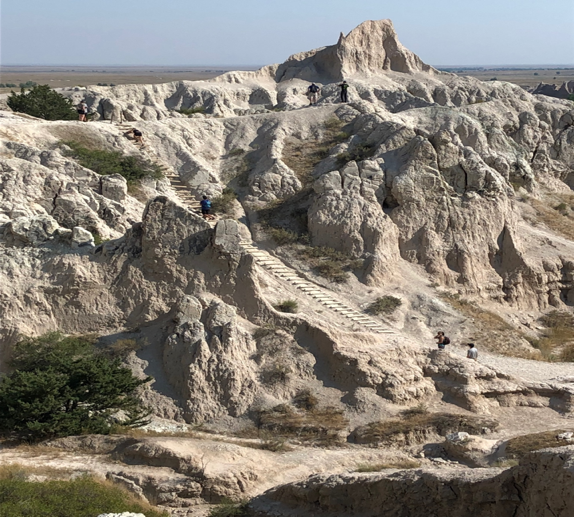 The Badlands offer more than admiring beauty and hiking. It can also open your mind to understanding the past with visual evidence of its bizarre wonders. Imagine encountering a fifty-foot marine lizard with sharp fangs and a killer tail. Or a herd of thunder beasts, mammals averaging eight feet tall and 16 feet long. Or a saber-toothed carnivore the size of a jaguar. The Badlands abounds with fossils. It is finding evidence of the almost unimaginable creatures who once lived here that inspire paleontologists, those who study history through fossils. The paleontology lab in the Ben Reifel Visitor Center is a working lab where you can watch a paleontologist digging a fossil from its surrounding rock.

Over 270 national parks preserve fossils and some, like the John Day Fossil Beds National Monument in Oregon were created specifically because of the fossils found there. I never really gave much thought to fossils before but talking with the experts in the Badlands lab and then visiting John Day has me on a quest to earn my Junior Ranger Paleontologist pin.