I woke in a Walmart parking lot near a busy intersection along Interstate 15 about 30 miles north of Salt Lake City. That was not my intention. I had a rest stop picked out on the map for the night’s rest, but it wasn’t going to work. As I got out of the car there, a cloud of black bugs leaped onto my legs. I was wearing a skirt. Their bites were rapid and sharp. And the air stunk. I couldn't place the smell Rotting corpses? Malfunctioning wastewater treatment plant? Landfill? But it was a heavy stink. I swiftly brushed the bugs off and got back in the car.

I kept driving. Looking back on it now, I'm not sure how.  It had been a very long day. After packing up in the morning, I’d stopped at the wedding brunch for a warm homemade cinnamon bun and a burrito which I pocketed for later, and said my thank-yous and farewells. It took a long time just to get out of the Sawtooth Recreation Area. I took Highway 75 south through Sun Valley. The traffic in Ketchum was brutal. The town was packed with tourists. It took twenty-five minutes to get through three traffic lights. Heat rose from the street, compounding the exhaust fumes. In my frustration, I completely forgot that I wanted to stop at the botanical gardens a few miles south of town and spin the Buddhist prayer wheel in the Garden of Infinite Compassion. At that point all I was thinking about was getting away from all of the people and moving along the highway. But it was not to be.

Just outside of Ketchum, traffic came to a dead standstill. I was pretty far back in a line of traffic stopped for a small-town parade. We were slowly diverted to a side street which ultimately took longer than waiting on the highway would have. The parade evidently ended and the crowd was lazily dispersing. I suspect that my time in the garden would have been far less anxious than sitting in my car seething and swearing at the hiccuping stream of unfocused families ambling home with no care at all.

Finally I arrived at visited Craters of the Moon. Since learning of lava tubes a couple years back, I'd made it a goal to crawl in one. It took a minute after arriving to reclaim my mojo, but certifying to a park ranger that I had not been anywhere recently where I might have picked up the white-nose fungus on my shoes that is plaguing bat populations across the country and getting a permit to hike down into the lava caves got me back in the groove. I found slipping through the rocks down into the Indian Tunnel particularly magical, underground, yet feeling small within its spacious domed architecture, ethereal light streaming through corrugated holes, all cathedral-like and conjuring the potency of sacred rituals 10,000 years ago as though they were performed last night. 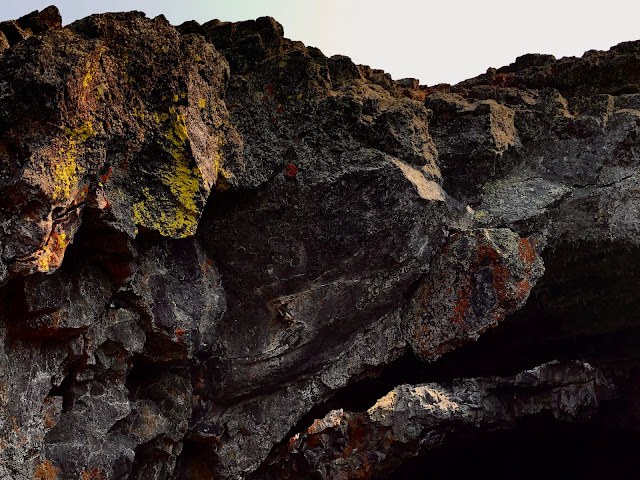 I drove the Scenic Road, hiked in every last cave and swore in as a Junior Ranger.

After that I stopped at that crazy tribute to atomic fission outside Atomic City. I chronicled this somewhere. It was eerie, like something in Dr. Strangelove. Even the outdoor signage sang in the wind. It took me awhile to place where the song was coming from. And I was never satisfied with the resolution. Or with the narratives of what had gone on at this particular site. It seemed like it just had too many incongruous reasons for existing. Like someone was trying too hard to lead me astray. Had UFOs landed here?

Then I made a pit stop at the Idaho Potato Museum in Blackfoot. I mean I was in Idaho. How could I not try to visit the potato museum? It was a squat rectangular building with a giant potato sculpture in its front yard. The museum was closed for Labor Day, but really, the potato said it all up as far as I was concerned. So I took a picture. 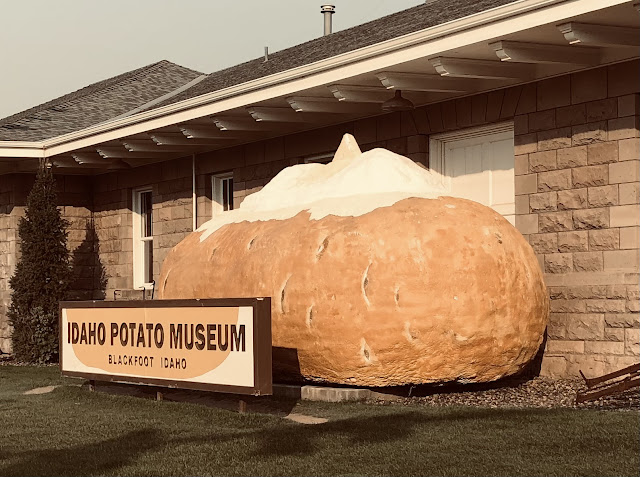 By early evening I was losing steam. Traffic on I-15 was heavy and when the glaring blue headlights at last wore me out, I didn’t care where I slept. I could use the bathroom in Walmart and buy an ice-cold coffee in the morning and just hop on the road.

When I woke and looked around me at all of the asphalt and traffic, I decided I wanted to go to Cedar Breaks before heading to Bryce Canyon. Cedar Breaks is a national monument at a cool 10,000 feet in Utah. A good wind blows through the tall cedars up there. I got off I-15 at Parowan and took 143 South through Brian Head. I’m glad I did. Although I’d been to Cedar Breaks, I’d not been to Brian Head. If I was an executive in Salt Lake City, I’d definitely build a ski lodge with a view there.

Cedar Breaks has a pretty canyon, a bit like a mini-Bryce. 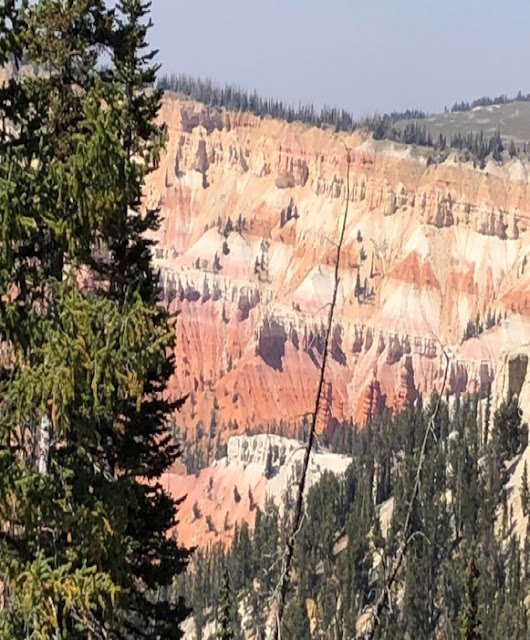 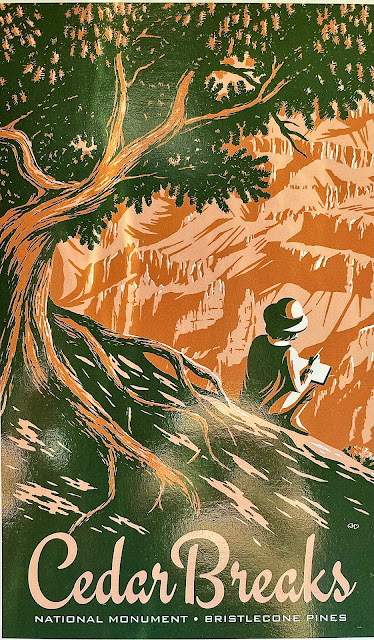 I stopped in at the Visitor Center for post cards and my Junior Ranger book and was lucky enough to be there when a ranger was presenting a program on pikas. I’d wanted to see a pika since seeing one on a David Attenborough clip on Youtube. They look like miniature rabbits with short round ears and have a friendly call, a sharp tiny “eeeee.” But the program was another story of climate change gloom and doom for the little creatures: pikas suffer brain damage after only five minutes in seventy-five degrees Fahrenheit. It was a hot afternoon and now I was hoping not to see one. 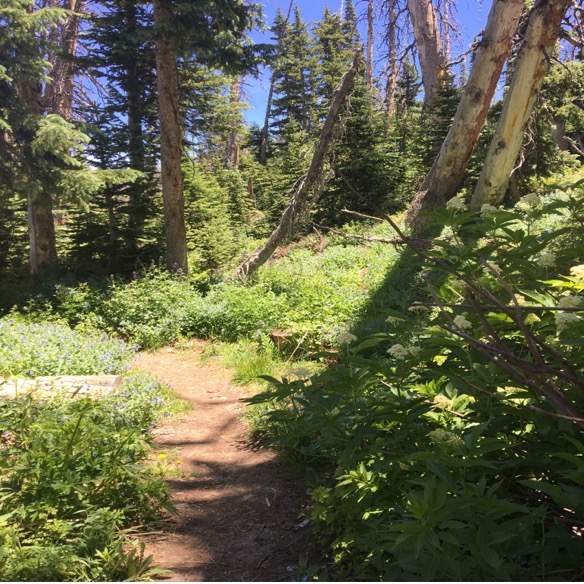 Feeling deflated and depleted, I knew the antidote: amble down the Alpine Trail, a sweet little trail leading deep into the woods to a mossy glade and a clear pond. I needed to see green. To languish in it. I needed to inhale the fragrance of the stately cedars and the fecundity of everything living and dying within its forest. To revel in the splash of nature’s colors and hear  mating calls echoing through the thickets. I needed to contemplate life; doom would  arrive soon enough. 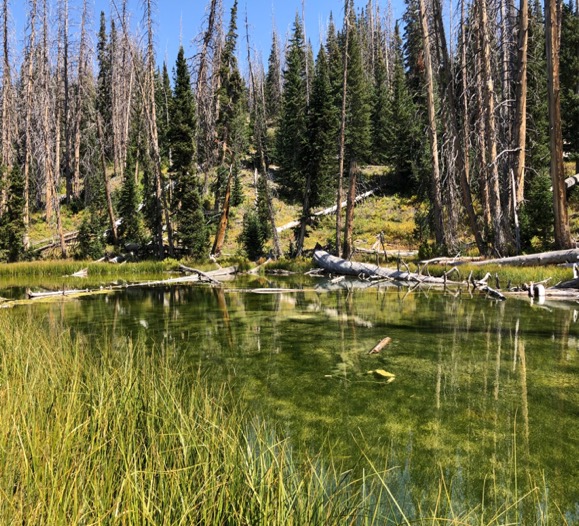 To stare down into the clear cool water and enter the magical world of damsel flies and water striders and tiger salamanders.

As I was sitting there on a log gazing into the pond, I met a historian who talked with me at length about the Staunton-Parkersburg Pike being a significant artery through Beverly, West Virginia and another man who talked at length about his dogs, the present one with him and other dogs of the past.

The afternoon was gone before I knew it.

I must have slept in the Dixie National Forest that night, though I didn’t record it and can’t recall the particulars. I must have been pretty darn tired.

I snagged a campsite to my liking the next morning at Bryce.