On the Road Summer 2021 Days 14 & 15 The Pacific Crest Trail: Rainy Pass, Cutthroat Pass & the Heather-Maple Trail in the North Cascades 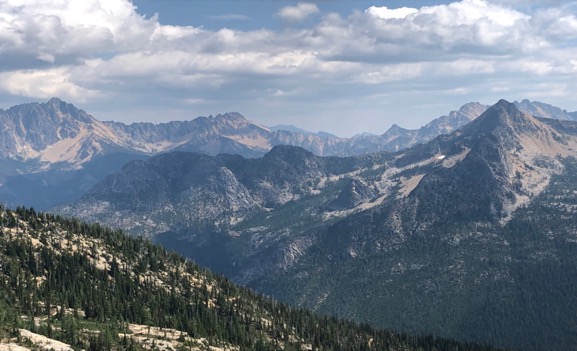 I realized after studying the maps at Hart’s Pass and talking with a couple through-hikers I shared my campsite with that yes, Cutthroat Trail was closed, but I could indeed hike to Cutthroat Pass from Rainy Pass. The Rainy Pass trailhead is just off Route 20, so that was perfect. I was determined to see Cutthroat Pass, but unsure whether my ankle would hold up on the twelve-mile over and back trip. So, I stuffed a beer and a pain pill into my pack. I am not recommending this, but it did work beautifully for me. The trail was varied, each step enchanting and much of it through fern-laden forest with a soft pine floor. 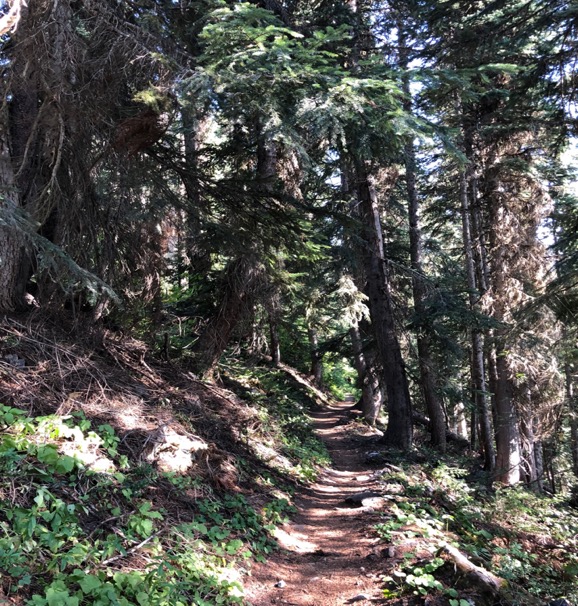 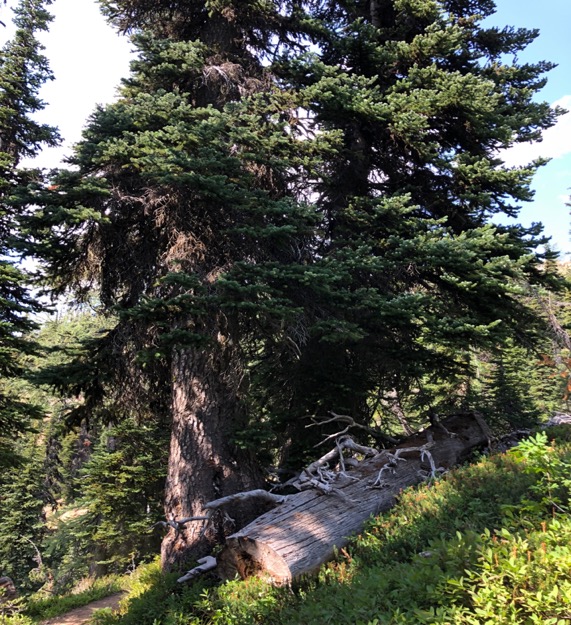 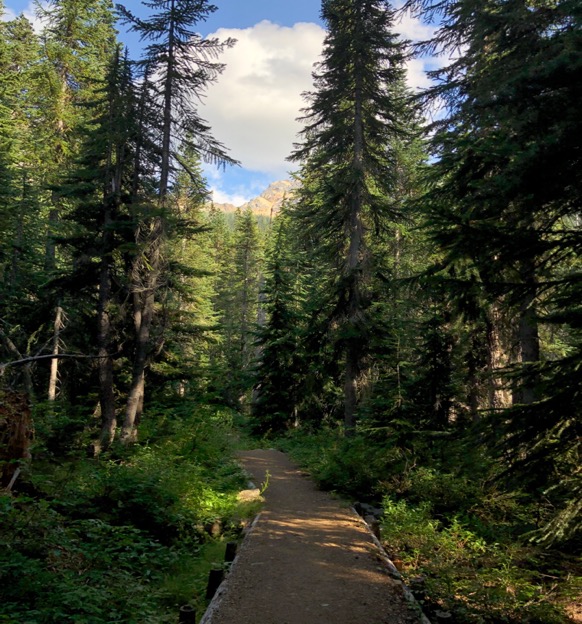 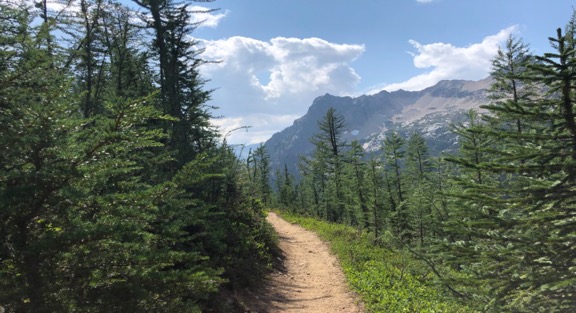 Some sections were quite steep and rocky 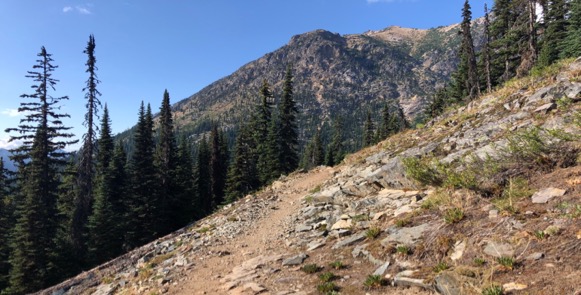 But well worth the breathtaking views. 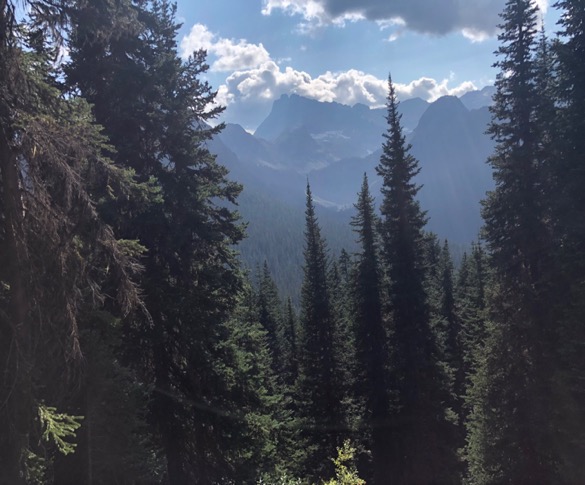 When I at last reached my destination, I settled down on a rock to immerse myself in Earth’s exhilarating beauty, to take in the splendor of Cutthroat Pass, the sculpted white clouds tinged with pink floating above the steep alpine slopes stretching further and further. My ankle had begun to swell, so I downed the pain pill with the tall can of Stash Mango IPA. This would ensure a comfortable stride back to camp once it kicked in and I was emotionally prepared to depart the vista. 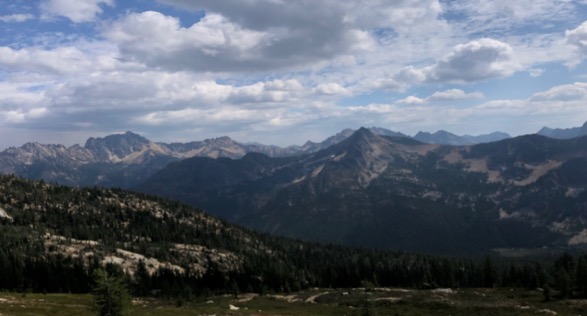 But for the interim, I would simply watch the dance of sun and shadow from passing clouds. 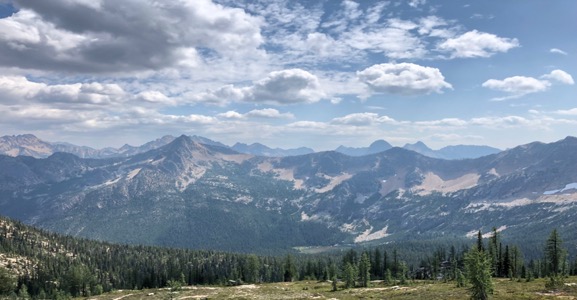 In retrospect, I am wondering whether it was while I was sitting here in my own world of awestruck wonder that the women who approached me the following day with such familiarity saw me. Absorbed in the beauty bathing me, I was only vaguely aware of any hikers passing behind me. 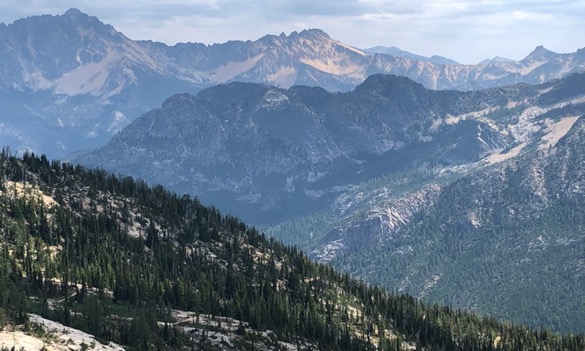 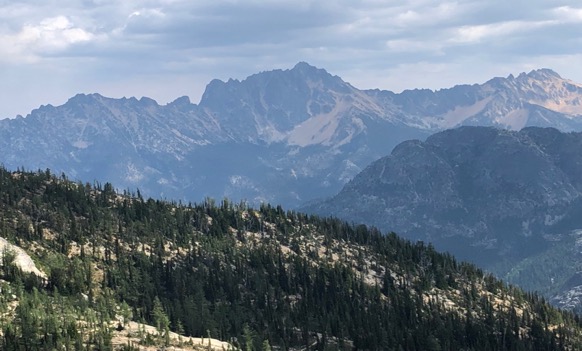 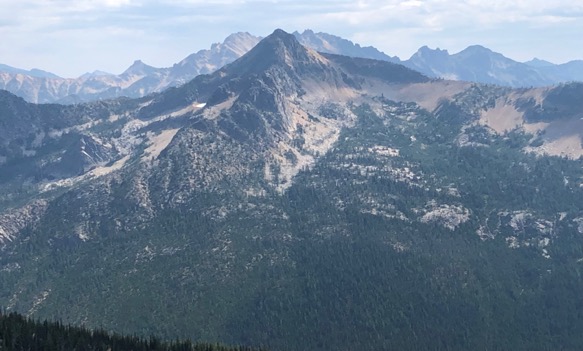 By the time I arrived back at my car, I was too whooped to move. Directly across Highway 20 is not the PCT traveling southbound as one might expect. The southern leg is in fact a short jaunt down the road. Instead, directly across Highway 20 from the Rainy Pass Trailhead is a day use area for the Heather-Maple Trail. A couple I’d met the day before who were staying in Mazama on their honeymoon, after assuring me they were not serious hikers, told me the Heather-Maple Pass Loop Trail was an easy trail, but so beautiful that it was on their bucket list and they’d traveled the breadth of the United States to hike it.

Why not check it out?

I didn’t see any signs that said I couldn’t park there overnight, so I pulled in front of the lovely picnic area, had a wonderful dinner, brushed my teeth, privatized my vehicle and was comatose within minutes. I woke early as the sun was shining low in flashes through the pines, had a filling breakfast and dressed in layers as it was cold and would get hot. The hike would be seven and a half miles. At the end of the day, perhaps because I had pushed myself the day before and perhaps owing in part to once again getting turned around, it seemed more like fifteen. Maybe twenty. I’m not complaining. It was extraordinary, perhaps the coolest seven-mile hike I’ve ever taken.

Be advised that only the day before I’d sworn the hike to Cutthroat Pass was the most fantastic hike I’d ever taken.

I am however sincere.

I took Heather-Maple clockwise in order to knock off the steep part before it got too hot when a more gradual descent would be welcome. I’m glad I did as I soon found myself scrabbling to reach even frail limbs to pull me up. I was also proud of myself for wearing long pants as in my effort to maintain a grip on the vertical hillside, I was prone against sharp rocks. I wouldn’t want to tackle sliding down these narrow chutes between unforgiving rocks with few handholds when I was tired.

The hike took me far above beautiful lakes tucked in bowls carved by glaciers and through two different passes (Heather Pass and Maple Pass) where I gazed out at peaks extending miles and miles and miles. The views all along the way, up and down were pretty, with wildflowers I’d never seen and tasty berries. I even hiked above the clouds for a while, which while it obstructed the valley views and was chilly and damp, was also terribly romantic.

You can easily hike to both Lake Ann and Rainy Lake by taking trails that lead off the main trail. 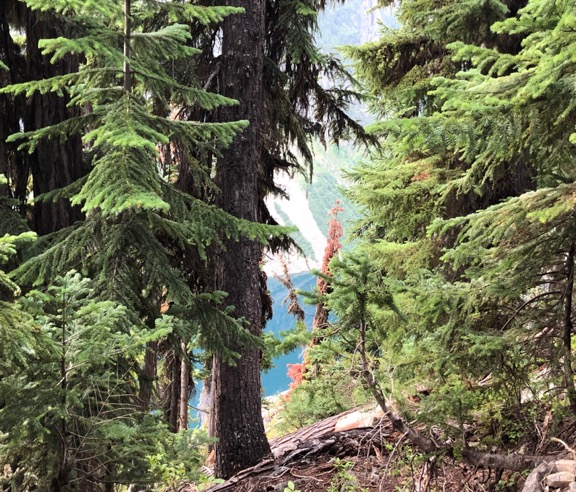 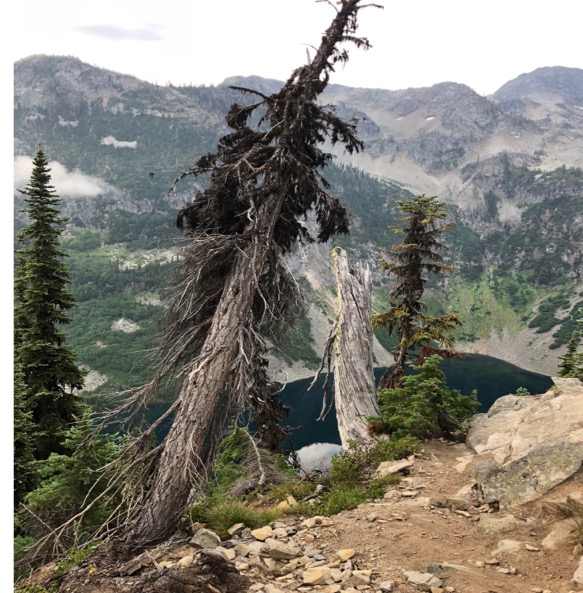 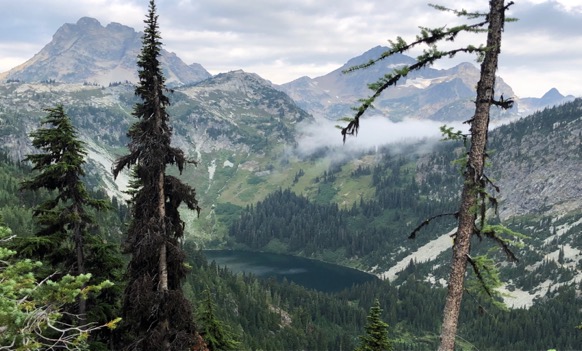 At one point, as I was twisting my way down a steep, narrow dusty corridor of rocks, I caught my balance against a rock where someone had carefully laid out a sweatshirt jacket they’d evidently found. I could understand losing a jacket tied around the waist and not noticing it slipping from under a backpack strap. How far back would I hike searching for it I wondered.

When I safely reached the bottom of the corridor, I came upon the hiker in front of me, a man in his fifties who was talking with two younger hikers who had approached him from a social trail leading around the mountainside. They smiled at me, including me in their exhortation that we must see the wonders around the bend of the trail they’d come from. Well, why not? 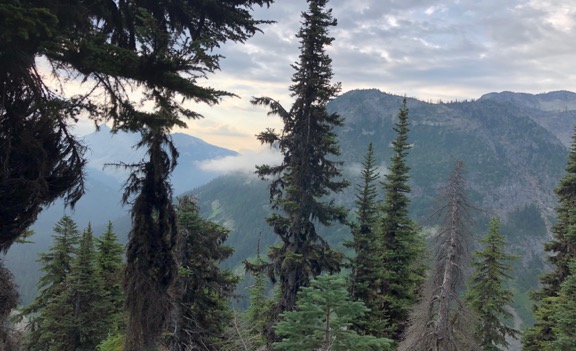 I realized afterward why not. It would turn out to be ironic that while chatting with my new companion who was heading toward Blackfoot Mountain, I told him of getting turned around on the Caprock Coulee Trail at Teddy Roosevelt National Park. Was it the residue of the recollection? As we exited the zigzaggy trail, I suggested that my direction did not feel right. I felt turned around. He checked his GPS gizmo and assured me it was. We separated ways.

How could it be then that a healthy time later I found myself heading toward that stupid hoodie someone had left? That fellow didn’t even know that we were at the boundary of the North Cascades park earlier; why did I trust him? 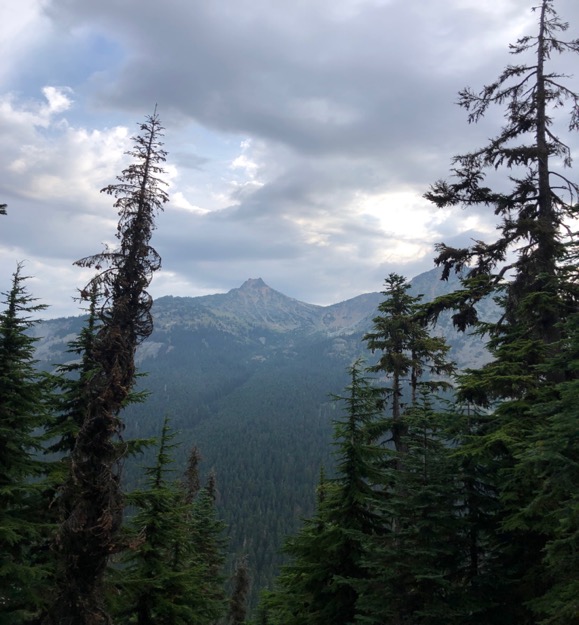 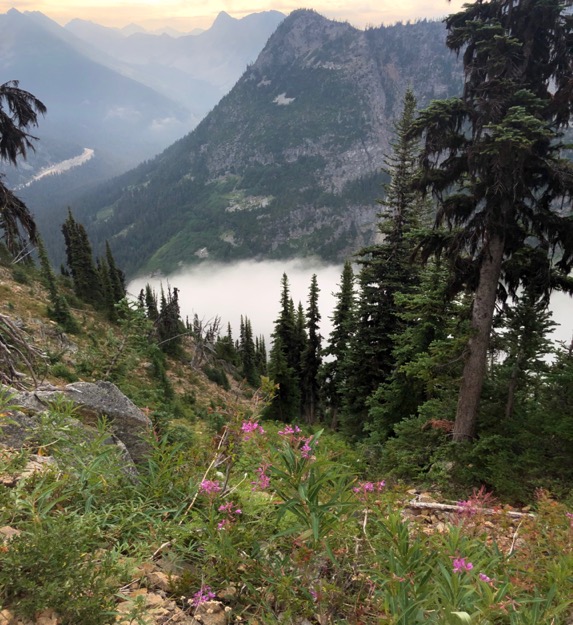 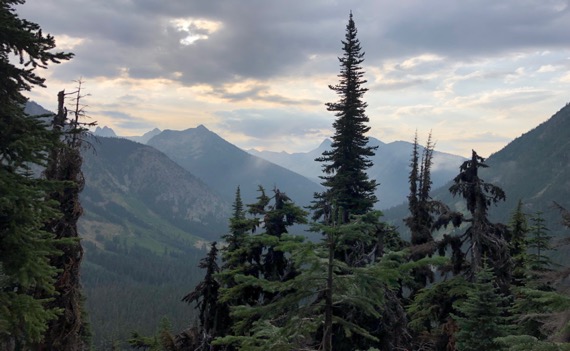 till, except for the wear and tear on my ankle, I couldn't regret seeing any of the views twice or thrice.

As I was at last on the gradual descent, rounding a bend through a tunnel of trees just before a curve above a mountainside of wildflowers, I came head on with two beautiful middle-aged women, with smiling, shining faces and dressed brightly in athletic wear. They stopped abruptly as one, astonished. “It’s you! We were just talking about you,” the first one exclaimed. I scrambled for words as I scoured my mind for a memory to place them. None drifted forth. “What were you saying?” I asked pleasantly. The second one answered. “We were saying that we really like your style.” Hmmm. Where had they seen me? Not that it mattered much, I pretty much wore the same clothes every day. Was it my crumpled straw cowgirl hat with the feathers hastily jabbed into it? Or had they seen me contentedly downing a beer on the rock as I surveyed the beauty of Cutthroat Pass? I smiled beatifically.

I made it back to my car in the early afternoon and hit the road, heading toward the North Cascades. I wasn’t really certain what to expect as it’s simply called the North Cascades complex, with the Park itself primarily wilderness.  Route 20 bisects the park with the northern unit containing the Ross Lake National Recreation Area and the southern unit containing the Lake Chelan National Recreation Area. I wanted to find a visitor center to pick up a Junior Ranger book. The North Cascades National Park visitor center in the north unit is located near Newhalem and the Golden West Visitor Center in the south unit is in Stehekin.

The Stephen Mather wilderness area is within the park and the park is surrounded by national forest lands, as well as by Canadian provincial parks in British Columbia to the north. That being said, the drive along route 20 soon began to reveal that the area is essentially a playground for Washington residents. The number of trailheads along Route 20 picked up substantially from the Rainy Pass Trails at Mile Post 157. The National Park Service publishes a State Route 20-day hike sampler and the internet abounds with descriptions of lovely day hikes, each unique. Route 20 is closed during the winter months due to snow avalanches. The closure zone has no fewer than 27 avalanche chutes, some stretching 2,000 feet above the highway. Pretty high stakes. Nonetheless, winter sports enthusiasts can access the closed portion during the winter season, parking in designated areas, but check forecasts first!

And be ready to die. 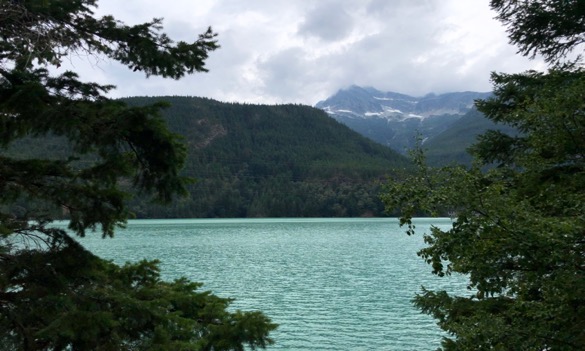 Lake Diablo is a soft milky green from the glacier flour.

Power companies built three large dams in the Skagit River Valley in the 1920s to provide hydroelectricity for Seattle, creating the lakes for the recreation areas and at least in the north, the local commerce. It was this encroachment that compelled conservationists to seek protection for the remaining wilderness, succeeding in the patchwork of federal designations. From all appearances, Seattle City Light controls the kingdom, at least the area around Lake Ross, including Newhalem proper where it appears to control the sheriff and fire departments, the general store, the playground and even the visitor rest area. In short, it’s a company town. The area is incredibly beautiful if you can overlook the transmission towers, electric lines and traffic congestion. The park itself has few structures, roads or other improvements and boasts one of the earliest research programs dedicated to studying climate changes. Still they cannot control pollutants moving in from the west or global warming in general and their modeling predictions are not pretty.

One wonders whether the good citizens of Seattle could dial in the environmental damage from the dams and apply pressure to seek more harmonious energy sources. After all, according to the NPS website, the North Cascades range has the most expansive glacial system in the lower 48, headwaters of several significant waterways and forests with the highest degree of flora biodiversity of any of our national parks.

After visiting the Park Visitor Center near Newhalem, which incidentally offers the best selection of cool national park merchandise I’ve ever seen, I went back to Lake Diablo where I found a lovely campsite in the Colonial Creek campground surrounded by tall cedars with moss-carpeted branches and glades of fern. 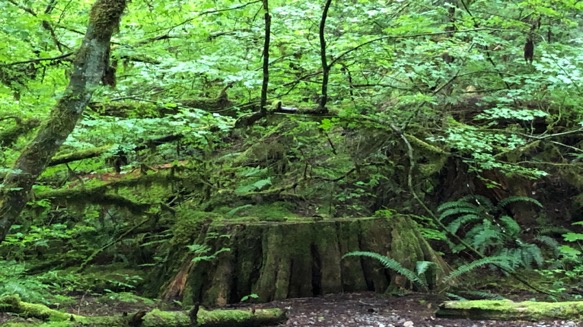 A perfect fairy kingdom if I ever saw one. 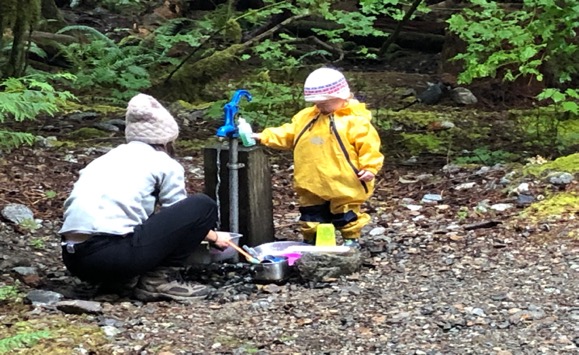 This little girl stole my heart, reminding me of mine many years ago. 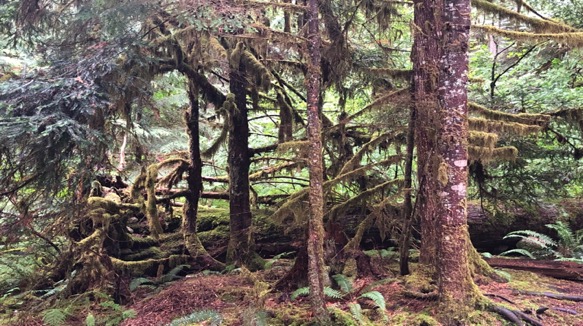 The earth smelled rich and damp. 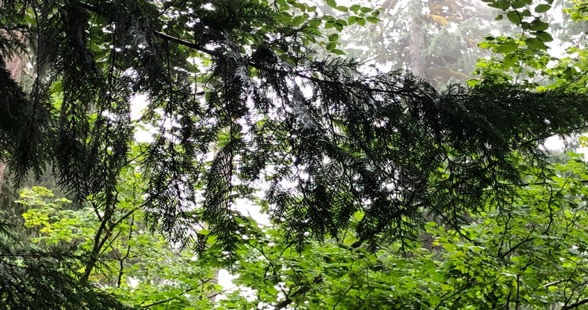 Even the canopy suggested that we were in a netherworld, a dreamland. 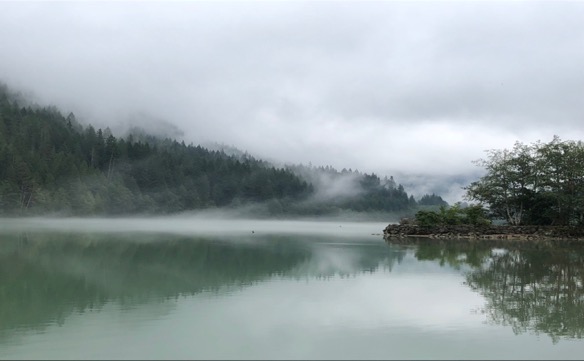 After a restful night under dark skies, I walked down to the silent dock in the early morning, enchanted by haunting bird calls from deep in the morning fog. Delicately small, swallow-tailed birds, perhaps the least flycatcher or maybe grey-black gnatcatchers flew fast, perilously close to my face, but alas gliding gracefully past, then deftly dipping down to the lake surface, which mirrored its meal. Nearly 200 bird species have been recorded in the area. As the mist moved like a slow barge away from the dense banks and lifted from the lake in strands and swirls, the campground was waking. It was almost too peaceful to leave. But alas, the campground would wake and it was a weekend just outside of a major metropolitan area. It was time to move on.