I was reluctant to leave the coast. Its sharp fragrance, its wildness, its palate. I pulled the car over to a berm to photograph the tall wildflowers at the road’s edge. Perhaps some dark winter night alone at the cabin, scrolling through my photos, it would bring it all back. The ocean breeze moving briskly through my dreams. The pounding surf. The heady comfort of the mossy rain forest. Leaving such beauty rents my soul. But I could not capture it. I could not distill the sun from the shades of deep pink and violet. They were one and the same to my camera.

Leaving can not be but a lonely affair. I can only trust that the beauty I abandon has become part of my fabric.

I chose a route going through the Columbia River Gorge. It proffers a serene beauty: the mountainsides are steep, dark and dramatic and the river wide and peaceful. Interstate 84 is the primary designation of the road that travels along the gorge, but it is also Old Lincoln Highway, US 30, a road with a rich history. Completed in 1913, Route 30 begins at Times Square in New York City and travels the breadth of the United States to Lincoln Park in San Francisco. I grew up along Route 30 where it crosses through the western mountains of Pennsylvania. It was a place of legends. We spent countless hours searching for a stagecoach filled with gold hidden in a cave near my childhood home. Coming upon Route 30 was like seeing an old friend. Too, the Oregon Trail traveled this passage through the gorge, at places the selfsame road and at others a side road which one can take for portions of the drive. Earlier explorers have left bits of their spirit here; the trail emanates a sense of adventure.

The mountainside is rich with varied foliage and punctuated by generous waterfalls. Hiking trails leading to falls along the way are popular; many cars are parked along the waysides. I stopped to hike the Cascade Falls. It is a steep hike with mossy rocks, birdsong, delicate wildflowers, steep rushing falls and rewarding views of the gorge. Sailboats drift peacefully on the Columbia River far below. 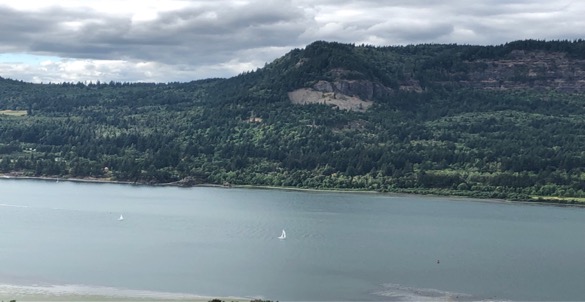 Evening was approaching when Mt. Hood came into sight, the volcanic mountain just as impressive and beguiling as the pictures I’d seen throughout my life. 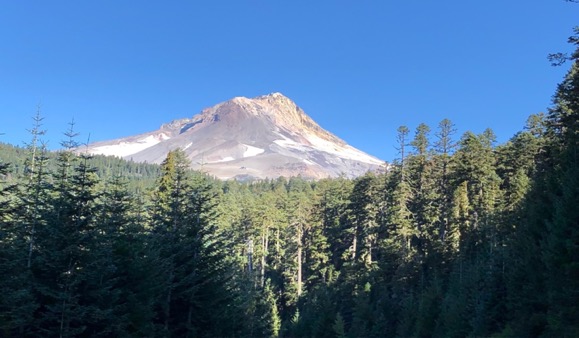 I did not have time for hiking before the sun dropped, but I did want to sleep in her embrace. The Mt. Hood area has a number of “Sno-Parks” designed so that people who enjoy winter sports in the mountains have a place to stay. I pulled into Pocket Creek, just before mile marker 67 heading south on Route 35.

The campsites are private, spacious and well-maintained, in short, quite beautiful. You are not allowed to sleep outside a vehicle and can only make fires in the designated rings, but the sites are well laid out with ample space for friends to join and yet secluded from other sites by pristine forest. Mine also had a sweet little trail down to a milky stream and plenty of wildlife singing in the tall slender pines and scampering about the undergrowth. I heard only two vehicles slowly pass by on the dirt road at the end of my drive and felt quite alone. 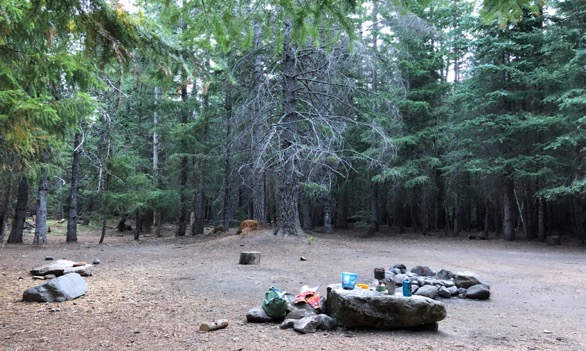 A permit, specifically the Pacific Northwest Forest pass is required from November 1- April 1. Oregon’s can be purchased through their driver and motor vehicle services department. America the Beautiful passes work at Oregon Sno-Parks too. There was an outhouse at the road entrance but other than that, no amenities. Pack out your garbage.

Heading south on 35, I stopped to pick up a hitchhiker. I had to rearrange a lot of stuff to make room for him, but he had an irresistible smile. He looked like a leprechaun. I don’t generally stop for hitchhikers as over the years I’ve heard enough stories to be wary of the kindest looking person. But through-hikers, well through-hikers, those who are hiking long trails like the 2650-mile Pacific Crest Trail are easily recognizable. And they can always use some help. It is standard etiquette for day hikers to ask whether they can take out a hiker’s garbage, and to offer spare food and water or a ride to the nearby town. Our routes would part in just a few miles, but it was a nippy morning, and he was happy just to warm up. I blasted the heat for him. As he was again slinging his backpack over his shoulder, I wished him good luck. With a grin and a wink, he answered, “I make me own luck.”

The drive along Route 26 was pleasant. Orchards, farmers’ markets, vineyards, followed by national grasslands with gorgeous flowers. Prineville was an accommodating little town. It had a clean laundromat with plenty of washers and dryers. I felt okay to walk around town while my clothes were tumbling. I cleaned out my car, put on clean sheets, folded my clothe, gassed up and hit the road feeling like a million bucks, driving past sandy hills, happy to be inhaling the pungent aroma of sage as I headed toward the Painted Hills unit of the John Day Fossil Beds National Monument.

And so it was that one fine day in the merry month of May 1812, two men were found ambling naked along the Columbia River by a party of wide-eyed trappers. One was Ramsey Crooks and the other John Day, a tall cheerful, open-countenanced trapper from Virginia with a spring in his step, ‘strong of hand and bold of heart,’ and evidently the more memorable of the two. They’d been robbed of everything including their clothes. It was something to talk about and so as the story was retold over time, and the spot pointed out on the river, it became known as the John Day River. It’s one of the longest free-flowing rivers in the continental US today. (If you’re wondering what the standard is, the John Day is absent of dams for 281 miles.) Two towns along the river were named accordingly: Dayville and John Day City. The river is dammed just north of the Oregon border in Washington and that dam is called the John Day Dam. Naturally the river valley is called John Day River Valley. And a national monument extending 20,000 square miles across Oregon, the John Day Fossil Beds was named after the John Day River for its role in unearthing a treasure trove of fossils. Quite a legacy for one man who didn’t really do anything extraordinary. But then…

I wondered when the story was told to travelers about John Day whether they spoke too of his life after the robbery, of his rapid decline, his body buckling, then his mind. He took the blame for his body wearing out, admitting he had lived too fast. His choice of vocations certainly didn’t help. Trappers during pioneer days witnessed untold violence in confrontations with Native Americans; many froze to death in the brutal winters; and starving to death was a very real possibility for a trapper. During his last trip with the Pacific Fur Company shortly after the robbery, Day became so enfeebled from hunger that he had to be left behind. It was during this time that his buddy Ramsey Crooks who stayed behind with him called it: it was all just too much. John Day lost his mind, yelling incoherently and generally behaving like a mad man. Was the rendering of his story to travelers just a bunch of joking and elbow-nudging about keeping your clothes on? Or was it a cautionary tale, attributing the seed of his madness to the malfeasance committed against him along the river?

From any perspective, John Day’s was a life lived fully. And maybe it’s only fair that a wide swath of Oregon pays homage, intentionally or inadvertently to simply that. 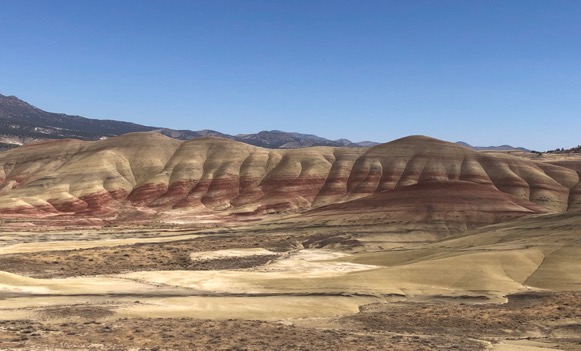 I’ve been mildly fascinated by some findings but frankly I never found myself wildly excited over fossils until I visited the John Day Fossil Beds. To me, the past is past. There is too much going on in the moment to spend a lot of time studying minute details of the past, especially when it comes down to brushing them off and piecing them together. But there was something about seeing the distinct assemblages of life in the museum there that changed that for me. Maybe because many of the skeletons were unfamiliar. Weird. The fossil beds here are unique in that, for various reasons, a number of different epochs beginning 33 million years ago are perfectly preserved. Fossils of life we had no idea existed are still turning up regularly. Fossils of leaves and insects are as well-preserved as though deliberately pressed in a book. Giant, almost surreal predators hunted here: mammoth fanged hogs, menacing bear dogs, and surly saber-toothed cats. And honestly: elephants, camels, rhinos and ground sloths in Oregon? Who would have guessed? Magnolia trees, palms and bananas? On top of that is the silent beauty of the desert mounds painted in bands of rust, coral and gold. Each band of color holds its own epoch: warm, humid forests; cool dry forests; savannas with flood plains. Hiking the trails, one is struck with the number and variety of soil types, each only now releasing its ghosts. So much life that has come and gone. So humbling to realize that our time will be just another band. 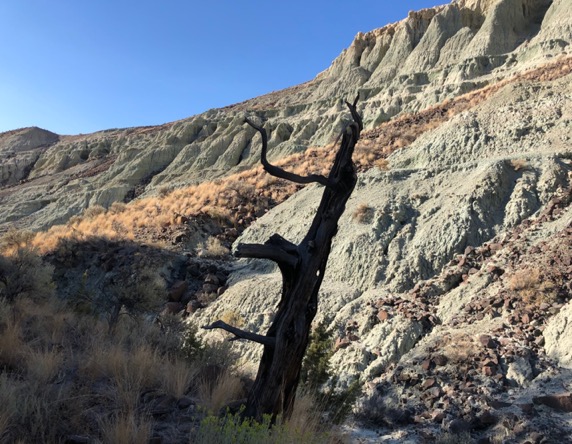