It was proving less and less likely that I was going to find an Asian nail salon before reaching Stanley. Why had I thought that it was a given over the last 600-mile leg to a fancy wedding? Well, I had packed a bottle of nail polish just in case. A rather garish red and no remover so I’d have to be very careful, not one of my specialties. There would be swim attire and open-heeled shoes at the ceremony. I could probably escape scrutiny while pontooning on Redfish Lake, when I could hope my colleagues were otherwise distracted, perhaps under the influence of tasty margaritas concocted by the bartender at the Redfish Lake Lodge. I could always curl my feet under my legs. The suggested evening attire was that of cowpokes. My cowgirl boots would conceal evidence of my sorely overtaxed feet. Razor, tweezers, nail clippers …I had this one. I could look glamorous after 26 days on the road. Hmmm. When did I last wash my hair? I sort of hated to do it; the oil made it so lustrous, but it is long and thick and was getting very, very heavy. The guest list would doubtless include a good number of high-end spa regulars. Too, the dresses and cowgirl jacket I’d been sleeping next to and subjected to the general abuse of everything jostled about the car for three weeks were bound to need hung to lose their wrinkles and get a little fresh air. A costume designer I’d met at the campground at Olympic had expertly wrapped my long turquoise beaded anklet around the rim of my cowgirl hat. My boots were a deep brown stitched in turquoise. I had an antique bronze buffalo bolo tie to match my gold cowgirl dress, and an amazing fringed leather jacket hand sewn and beaded by a family in El Paso. And I had a sexy long-sleeved black velvet dress for the wedding. Two days along a rushing crystalline river among the fragrant Ponderosa pines and I would look brand new.

That was the plan anyway.

The Wild Rose Park below the Black Canyon Dam near Emmett, Idaho proved an ideal place for a lovely picnic and washing my hair. I had a BPA-free, food grade four-gallon water container with a spigot easily accessible in the back of my car which I parked along an asphalt drive where I felt comfortable my lather would make its way to a wastewater treatment plant. Even biodegradable products pollute. The rivers in this part of the country are hands-down cleaner than most in the East and I certainly had no intention of degrading them. The park is grassy, has large shade trees and picnic tables and overlooks the river, so it is a pleasant rest area to do yoga and generally feel good about being alive. 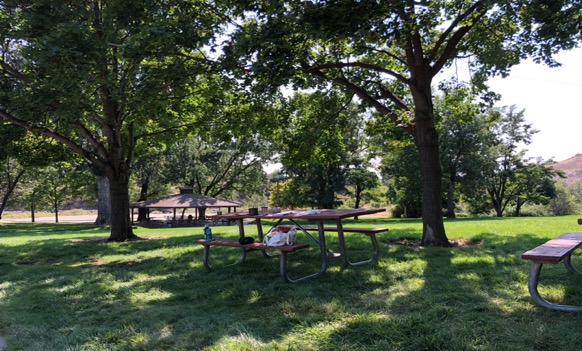 Google maps had taken me down some pretty solitary and sparsely marked roads through Oregon from John Day. I was gladdened to pass a small solar farm in an otherwise dearth desert scape, but uncertain whether I was heading in the right direction at a couple intersections. I should be entering the Boise National Forest soon. I much prefer getting lost in the forest to getting lost in the desert. Not everyone feels this way. A couple people had warned me, in very ominous tones that Highway 21 to Stanley was treacherous, with hairpin turns and steep precipices. The granite peaks in the Sawtooth National Recreation Area and surrounding wilderness are intimidating, some reaching 10,000 feet. I would be climbing to 7,000 feet. I live in the mountains, albeit older, smaller ones, the Appalachians and I expect a mountain road to be winding and dangerous. And think about it: would I be any more likely to survive a 4,000-foot plunge down rocky cliffs than a 7,000-foot dive? So, I shrugged off their dire warnings and was actually looking forward to the Ponderosa Pine Scenic Route. I’ve got a thing for Ponderosas. The best aroma in the world in my book. If you get the chance, go up to a Ponderosa tree and bury your nose in the bark, preferably a little nook that’s been compromised and has evidence of sap. Inhale. Vanilla, nutmeg, cinnamon. The trees smell like childhood Christmases. How comforting is that?

If you’re not already an addict, put the Sawtooth National Recreation Area in Idaho on your bucket list. It has over 700 miles of trails over 756,000 acres rife with elk, deer, moose, coyote, bear, and well, nearly 50 mammals have been sighted here as well as nearly 200 bird species. It has 40 granite peaks over 10,000 feet and over 300 pristine alpine lakes and a ridiculous number of breathtaking panoramas. Just after Lowman on 21, begin looking for small signs indicating natural hot springs. I’m pretty sure the first one is below the Kirkham Campground, where a staircase leads to soaking pools and small steaming waterfalls cascading down the South Fork of the Payette River. A small fee is required to park, and a vault toilet is nearby. If you plan on hiking in these hills, make sure you download trail maps before you begin your trek through the forest as you will not get cell service and the ranger stations may not be open.

The area offers plenty of camping options. Signs like these dot the scenic byway. 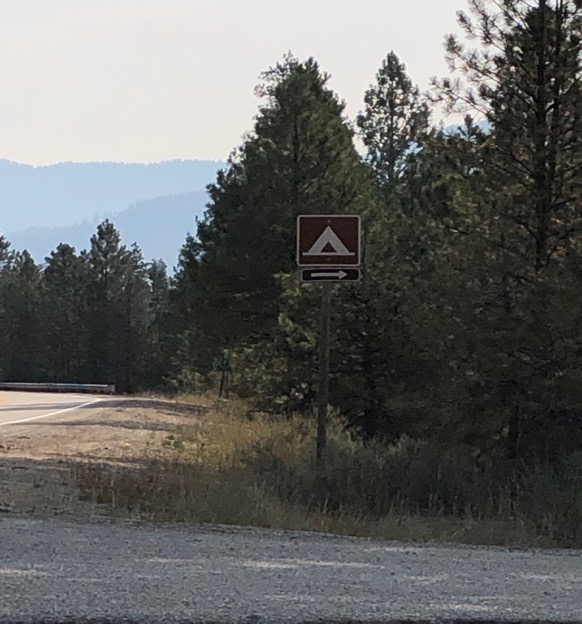 Not having made a reservation, I scoped out several campsites along the way, finally opting for an empty primitive one just before mile marker 86. 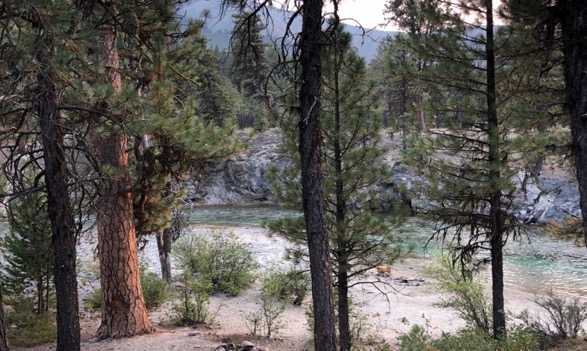 I had command of a river bend with sparkling rapids and alternating cobalt and emerald pools where I could soak my feet. I watched river otters playing and kingfishers diving. Night skies were black as black can get with more stars than you ever imagined. A few other campers joined me over the next two days but were relatively unobtrusive. Still, it’s better to be alone when primitive camping. You have a shovel for burying your poop and leaving no trace, and privacy is nice. A chatty woman pulled into the campsite next to mine because she felt safer next to me. She’d recently lost her husband and was discovering a new life. I am so old now that these anxious stories bore me. All I could say was “been there.” Still, she was not dissuaded by my lack of interest. Even though I felt flooded with wonder here, I wondered if I came off as a grumpy recluse. My mental trick when self-consciousness invades is to turn my attention to gratitude. Perhaps if she wasn’t there an axe murderer would have come and had his way. I had recently met another woman my age who also car camps solo. She opens her hatchback and attaches a tent. I suppose that’s fine in a campground. But I like the option of stopping at a rest area when I am tired and not worrying about whether some strange agent might just pull off some webbing and attack me for kicks. I’m good with my set-up where it’s not easy to see just who is in the car and I’m locked in if I feel the need. After all, you don’t know who’s traveling down the highway.

Back to happy thoughts, which is mostly what I reveled in for two days here. I did wish that I had a little table as balancing my little camp stove on uneven rocks around a makeshift fire pit was a bit trying and I got pretty dirty that close to the ground. Here’s the one I want. It’s got a roll-up vinyl top and legs that can be adjusted for uneven terrain. The whole deal rolls up and can even be stuffed in a kayak. 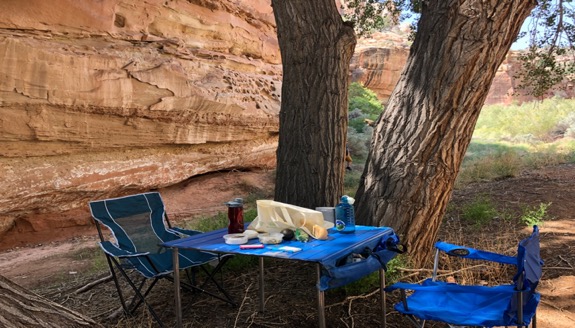 As I said, having not found a nail salon, I was on my own to clean up for a fancy wedding. I declared a spa day, devoted to soaking in the cold, clear river, tenderizing my calloused feet, polishing and shaping my nails and airing out the crumpled dresses, banking on the fragrant mountain wind to ease out the wrinkles from rolling on top of them. I am a restless sleeper. 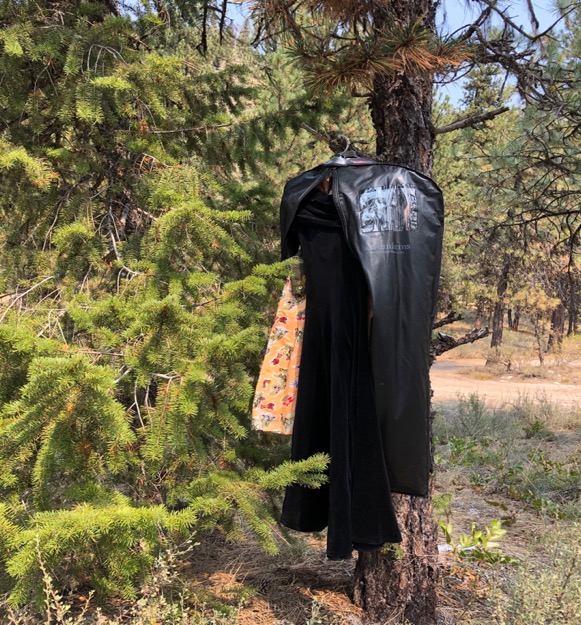 The wedding festivities, all four days: from roasting marshmallows under the stars the first night; to rehearsal dinner as the sun set over the high plains; to the sacred vows exchanged under a floral arbor along a rushing creek; to the Labor Day burrito brunch under a tent on a magnificent estate, were all outdoors against the dramatic backdrop of the Sawtooth Mountains. My immediate clan rented a couple log cabins from Mountain Village. They were less spacious and priced higher than other accommodations in town, but our family commandeered the whole tract, so it gave us the privacy we wanted. Our door did open to the Sheriff’s office though, which admittedly made me a bit nervous. It’s easy to step outside the bounds of the law at wedding festivities. And to call my family a rowdy crew is an understatement. 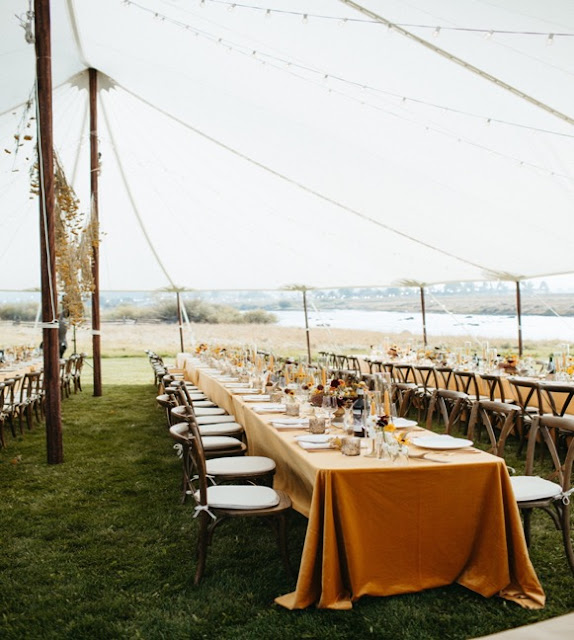 The wedding was upscale, elegant. Autumn floral bouquets everywhere, wine pairings with each gourmet course, satin and lace and tuxedoes, you get the picture. Leaving it all behind as well as all of the family…well, it was a steep serotonin drop when I pulled into the scorching hot, barren parking lot Monday afternoon at Craters of the Moon National Monument, my eye toward picking my way through sharp, black volcanic rock. 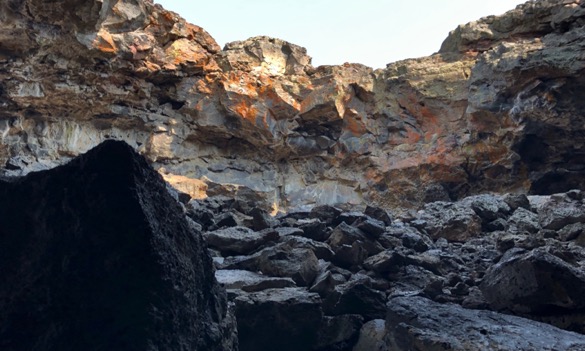