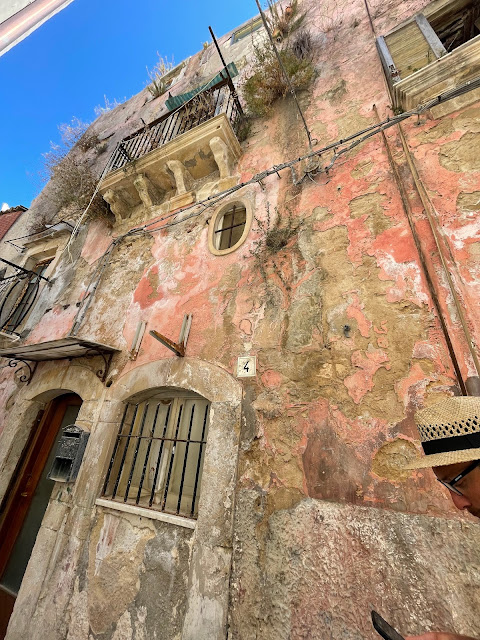 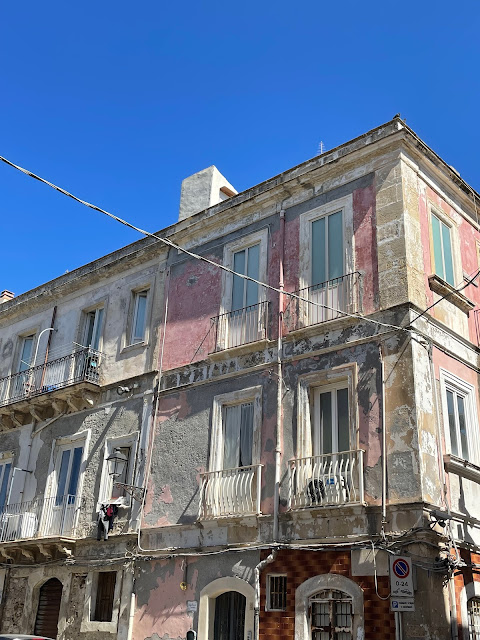 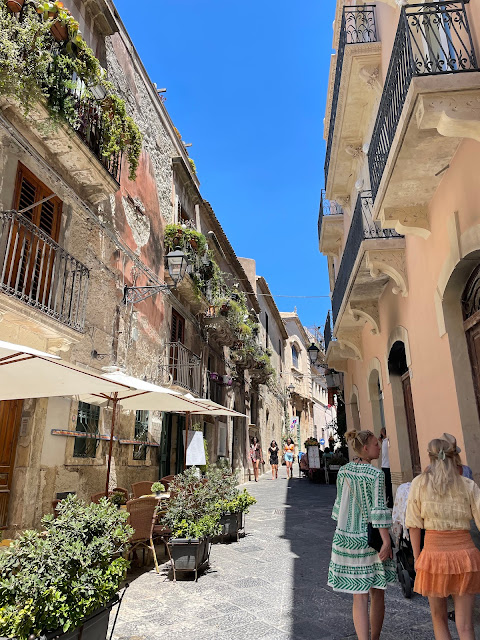 Ortigia, built 2500 years ago is the oldest part of Siracusa in Sicily, at one time the most powerful city in Europe with over one million citizens and home to the most noted literati of the time, including Plato, and the great poet Aeschylus. Hieron, the despotic ruler of Siracusa from 478-466 BC who followed in his brother's footsteps, was a noted patron of literature. His court attracted other noted visitors including another most esteemed Greek poets, Pindar. Perhaps there is something in the water there that promotes brilliance; the spring on the western side of the tiny island is after all the goddess Arethusa transformed into a spring by the god Artemis. Archimedes who lived there from 287-212 BC is still considered one of the greatest mathematicians of all time. 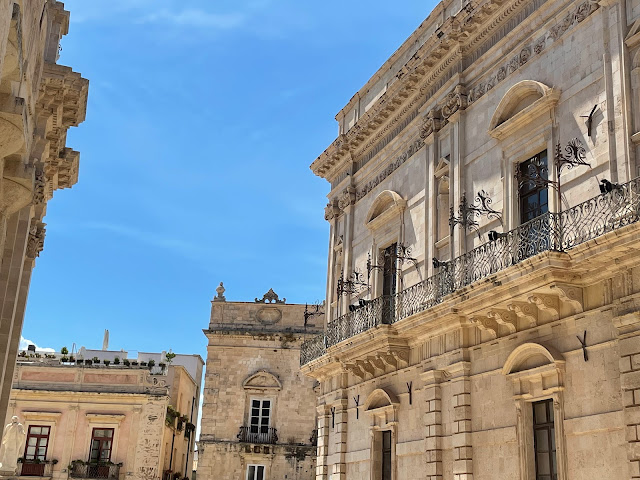 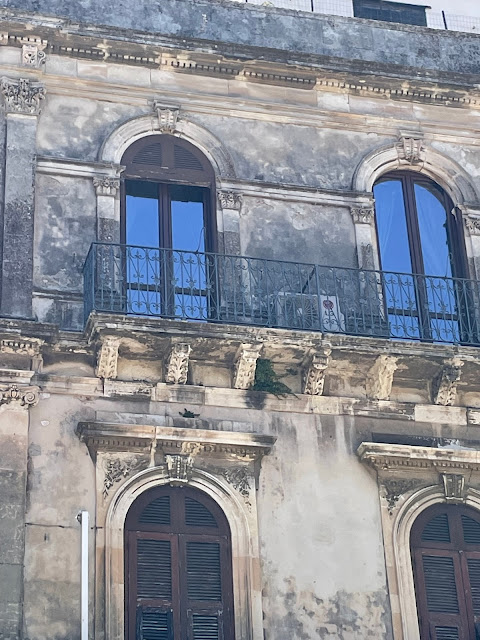 There is something about a balcony that always makes me wonder about those who stood on them, leaning over, looking out. What were their lives like? What were they thinking? The second one looks out over a clear blue and green sea one can hear crashing against its rocks and the stone wall below. 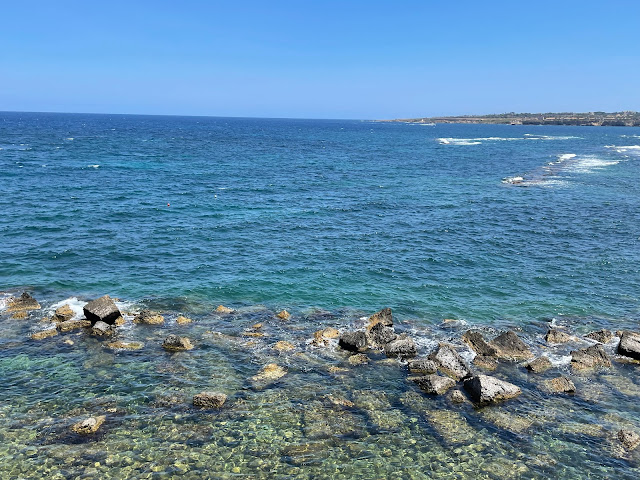 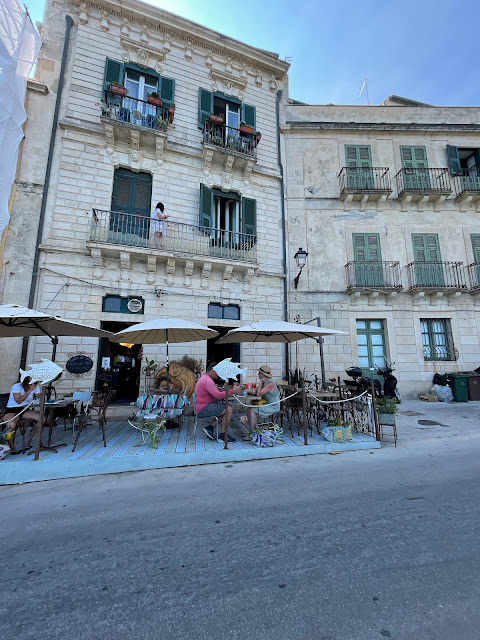 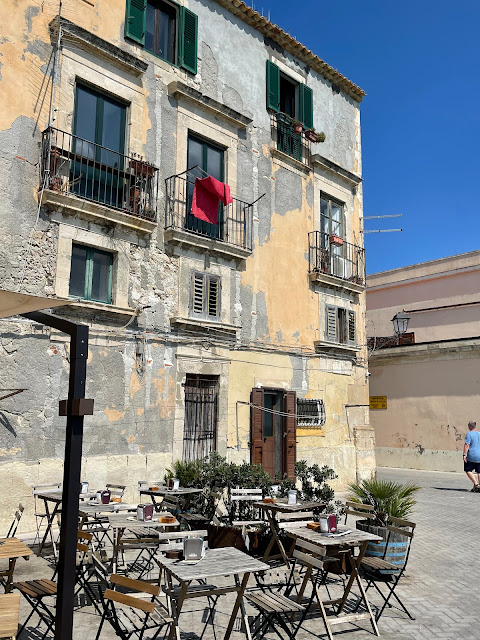 It just doesn't get any more romantic.
In the Fourscore Plaza, ta-da! 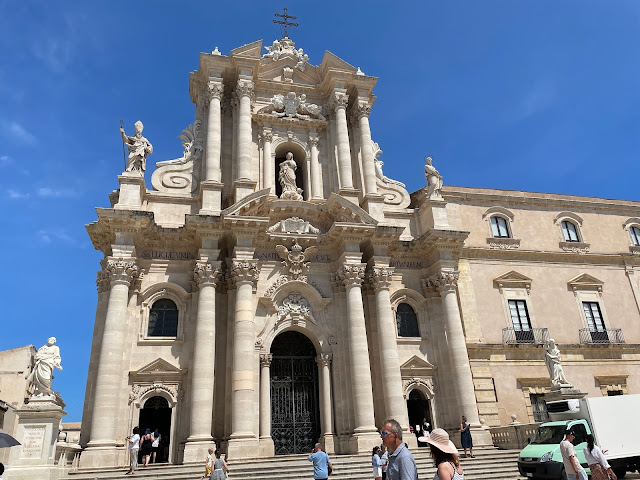 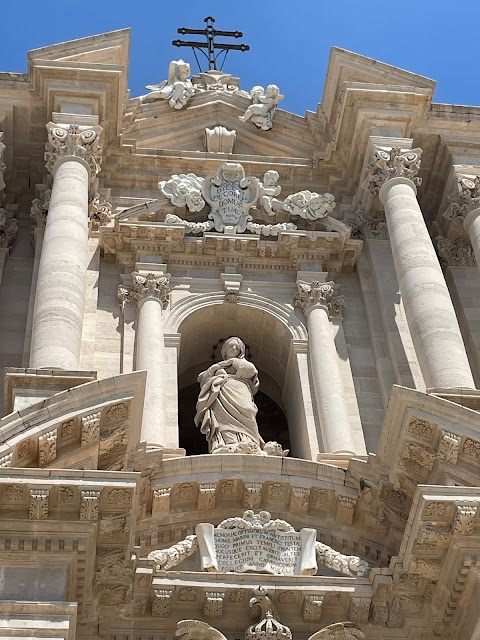 This temple, built in the 6th century BC as a place of worship was replaced by the Temple of Minerva by Hieron's brother, the tyrant Gelone in homage to Athena, the goddess of war who evidently had a hand in his victories. Athena however had a reputation of wisdom, fairness and compassion and only got involved in defensive wars, but perhaps that's how Gelone viewed himself. In the 7th century, the Catholics enclosed the Temple of Minerva (a/k/a the Temple of Athena as the Greeks and Romans began to see similarities in their myths and gods and decided they were the same only with different names) and dedicated the space to the Virgin Mary. By any name, it has been a temple of worship over the years. It may well have been a mosque under Arab domination (827-902). Rumor has it that Ortigia was a luxurious and decadent place during its 100 years of Arab control. But then the Normans invaded and tweaked the church, leaning more heavily into Catholic architecture and, though the facade was rebuilt after an earthquake in 1963, still today retains the features and mystique of the traditional Catholic basilica. A quiet walk into the dark and glorious nave will fill you with the the power of prayers over the ages. Light a votive in gratitude because you are there, in one of the most beautiful and at one point, one of the most enlightened centers of civilization. 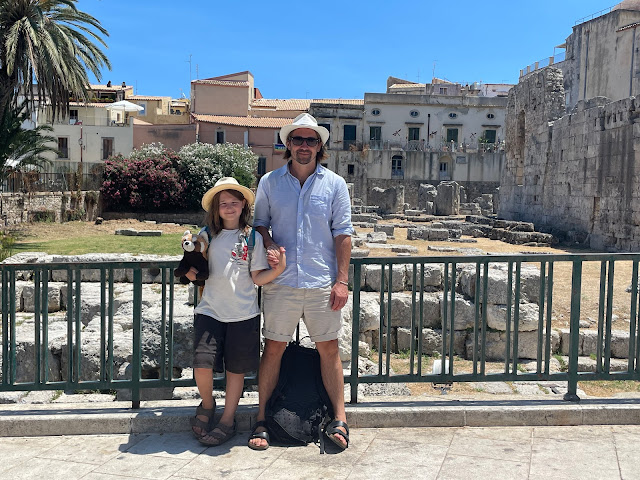 Father and son in front of what was, in the 6th century BC, the Temple of Apollo.  This worship space went through similar transformations in congregations as the Temple of Minerva in accordance with the prevailing religions. Apollo, the son of Zeus is the god of sun, light, music, truth, healing, poetry and prophesy, sharing the attributes of the father and son in this photo.