Quilts over the years 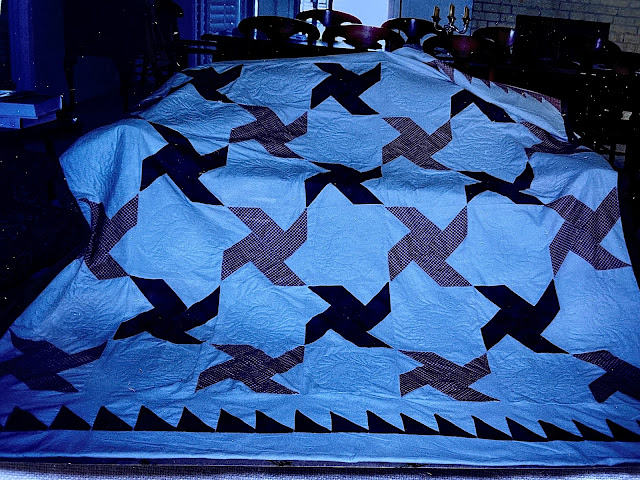 I came upon this old photo and realized that I've made a lot of quilts over the years, many worn through and passed into oblivion, others still in use in homes around the world and there's always a dream one waiting to be stretched across the quilting frame in front of the fire as winter's chill keeps me home bound. This one has an interesting story. I moved across the country, leaving behind a dear friend who had been there for me during the preceding tumultuous year and was the only witness I allowed to see the upheaval that had become my life. So naturally I missed him and I was searching how to deal with the angst of losing a close compadre. I decided on a quilt as each stitch would encompass my feelings. I thought and thought. What pattern? I like traditional ones as they carry so much archetypal energy. I looked through my quilt book of patterns, mulling this over for days. At last I decided on a water wheel. I had the book open to the page of instructions when he called. What have you been up to? I asked. Oh, he replied, I have been in the studio for three days and nights straight working on a sculpture of a water wheel. 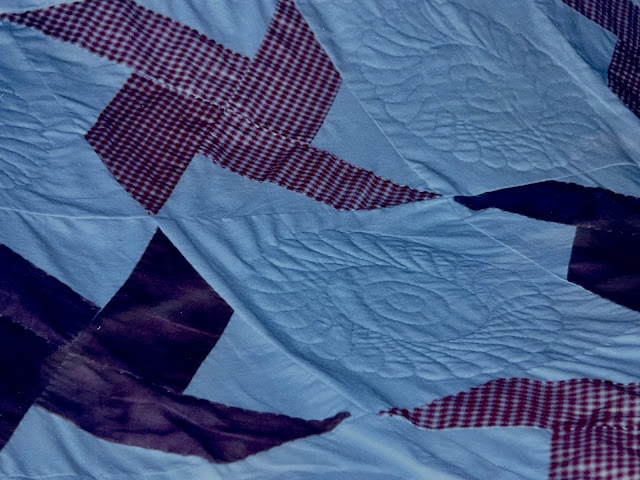 This one does not come complete with baby! I had forgotten about this one until I remarked to my son what a pretty quilt his new baby was lying on. He reminded me then how I'd had trouble figuring out how to put on a border on it and just left it in a hexagon shape. 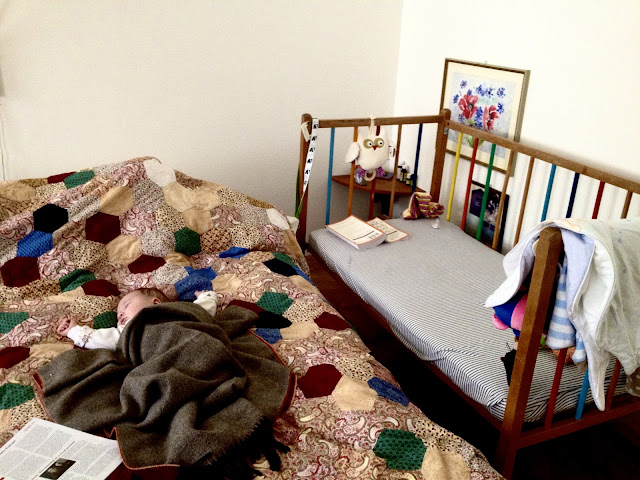 It has become a ritual for me to make any needed repairs when I visit his home in Vienna. 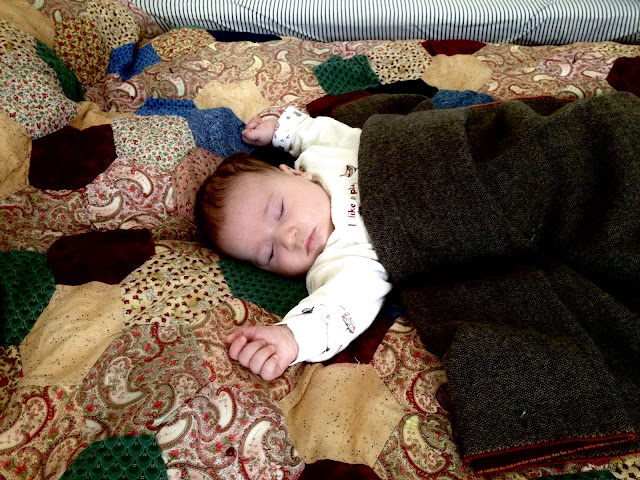 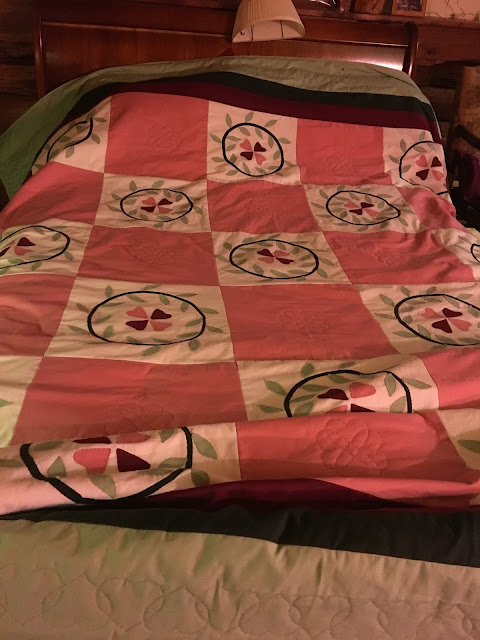 This is a bridal wreath quilt, a pattern chosen by my son's fiancee. Wrist surgery slowed me down and I didn't actually deliver it until a few years after their marriage. It is getting a lot of use! 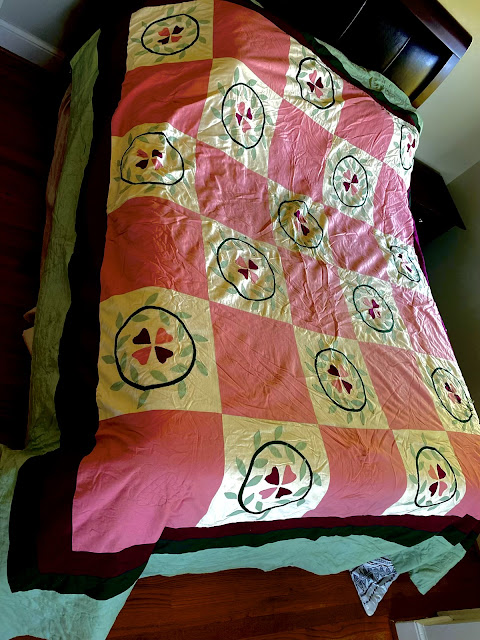 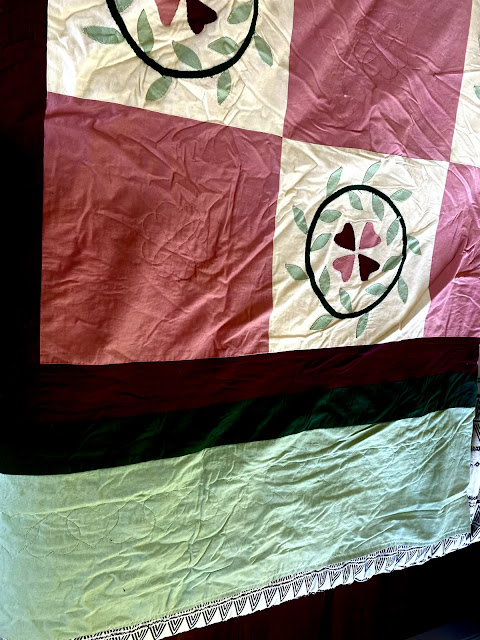 I truly did not think the next one pictured existed until last week. I made it for my second son's high school graduation. The pattern is called Flying Geese. His response when I presented it to him upon completion was "I don't like birds." Classic teen. Given his evident disdain, I seriously doubted that it made it from dorm to dorm to apartment through college, let alone across he country to Austin, Los Angeles and back to another apartment and two houses prior to the one he just moved into, but on the off chance asked his wife.
"Are you kidding me?' she asked. "Each time we move he asks me a million times if we've packed that quilt." 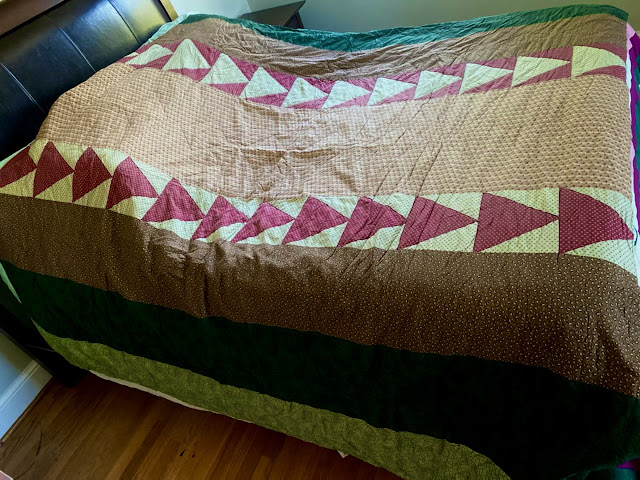 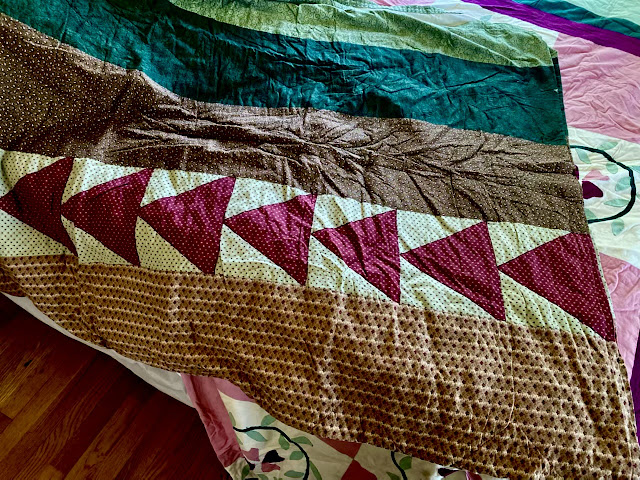 It's hard to discern the quilting pattern on the long panels. Just a simple diamond repeat. 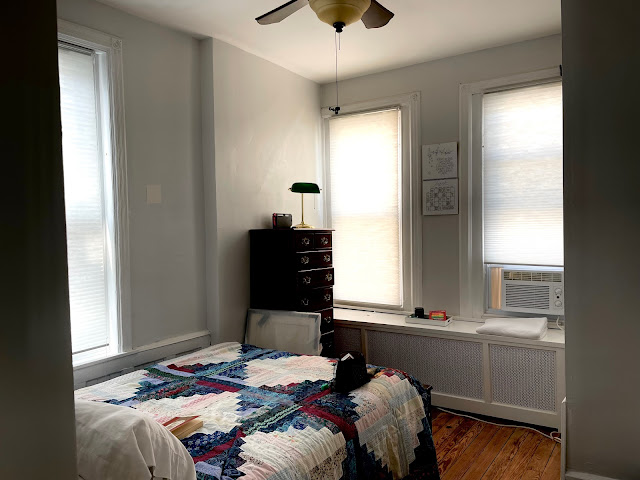 I've sewn a number of log cabin quilts over the years. They're fun because it's easy to find scrap material that works and it's a cool way to recycle and save favorite old clothes that might hold a treasured memory. Plus I just like them. The light and dark contrast doesn't get old and there is such a mix of patterns you don't need to even try for matching decor. I don't have a great photo of this one I made my youngest son for his graduation from college, but here's what I've got. I quilted a star pattern in the center of the light diamonds. 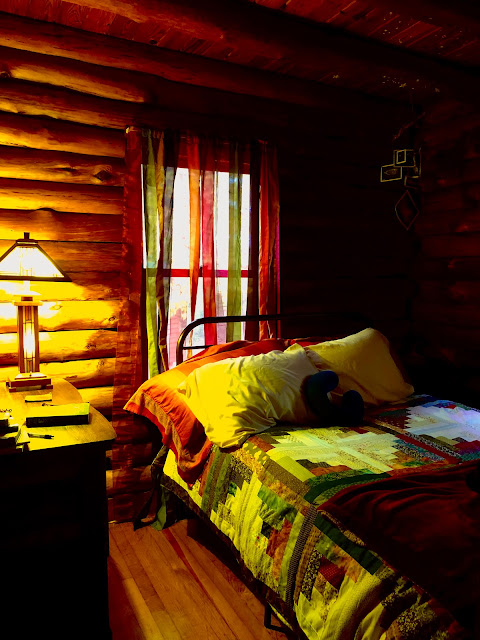 A log cabin in a log cabin! This one, I made for my home with leftover scraps from the previous one. I didn't bother with quilting it together as it was the second one of the season and Spring was coming on with all of its attendant duties on the farm. Just pulled yarn through at critical points, which incidentally, the mice chewed off when I was in the Everglades, so I'll be doing that again.