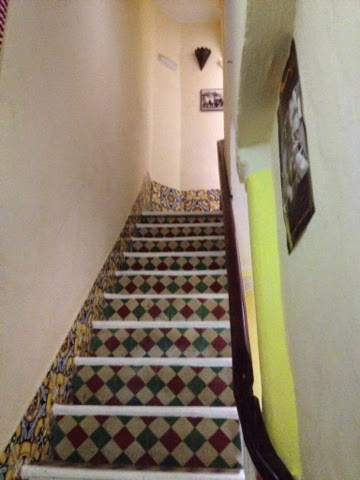 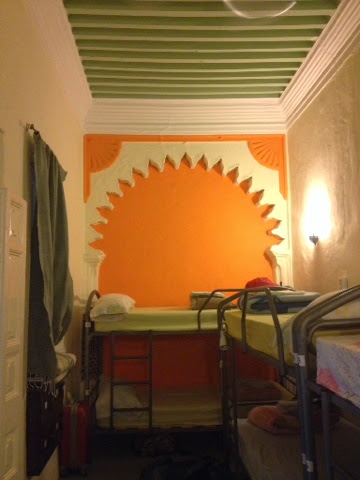 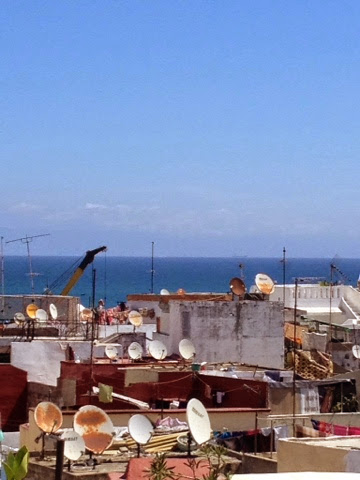 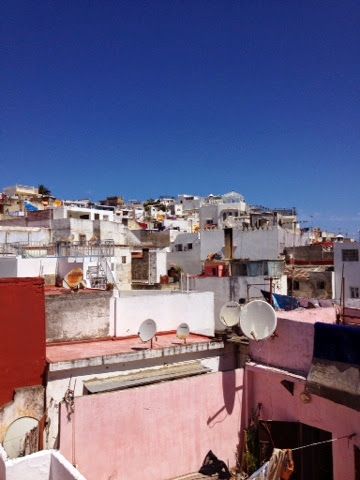 When I re-emerged from the hostel an hour later, there he was, the same guy, hanging around the doorway.  I told him that I really wanted to travel alone, but as I was telling him one of his cousins joined us.  I told them both that I really wanted to explore alone, so the first guy dropped off and the second guy, Jamal, remained with me.  Jamal is in town to visit his parents for the holiday of Ramaden, which is coming up.  He lives in Barcelona and it happens that not only do his parents live here, but his extended family, nomads from the desert in the south of Morocco, have set up a rug-selling shop.  It actually took me a while to figure this out, first because there seems to be a pretty tight network of passing tourists off from one "brother" or "cousin" to another and secondly, this network is all about someone getting business, whether it is getting the tourist to buy a rug or eat at a restaurant or take a taxi or hire a guide. I actually was under the impression that it was a tea shop, but he was simply inviting me to have tea with them, which I would learn is so traditional that by the end of any given day in a Moroccan medina, your blood is ninety percent mint tea with loads of sugar.
When he offered to take me to a good restaurant and I told him that I was not hungry and really just wanted to explore, he actually took me back through the maze to show me where his family's shop was so I could go back later and have tea.  He pointed to a set of stairs to a terrace and suggested that I come back there and and sit when I got hungry and he would find me and show me where to eat.  He told me one more time how to find my hostel and took me to the terrace to get my bearings in the city from that vantage point.  I thanked him and went off.
The market in the medina and the surrounding streets were only mildly terrifying.  Walking up the street, I shared the sidewalk with metal smiths, their welding torches splaying flames and then I inhaled the toxic fumes from painting metal grill work along the sidewalk. The fumes hung in the hot thick air. Then I walked past men sawing apart goats. All of this activity was taking place across the street from an untended cemetery where people sat on decayed tombstones in the rectangular shape of coffins eating lunch and texting.  It was all just plain creepy.  And the begging and calling out was ceaseless.  In the parks and plazas, the metal of many of the bench seats and backs had been stolen, so there were just skeleton benches. There were few waste receptacles and though there seemed to be public service workers here and there picking up trash, the town was pretty littered.  Everything was poor and shabby.  Even the main playground was depressing. 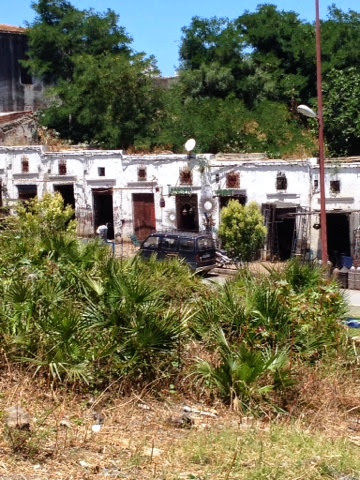 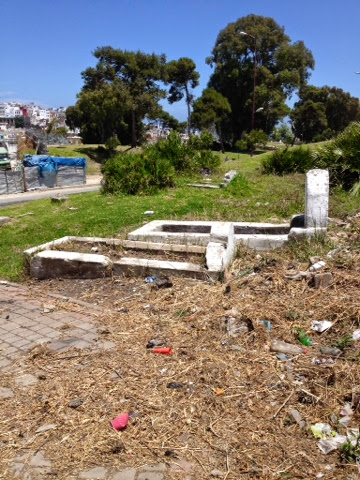 The people sitting on the edges of the tombstones of this cemetery did not look like they would appreciate me snapping their photos. 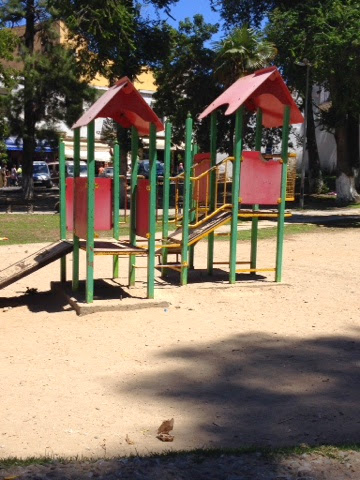 Here and there a pretty mosque rose among dilapidated buildings. 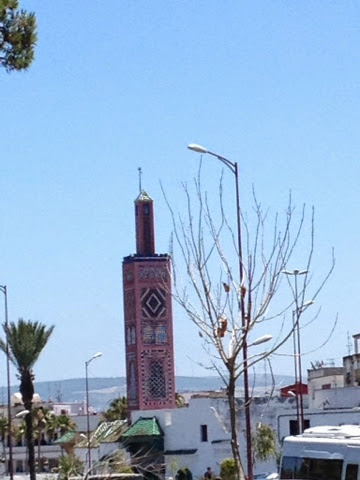 I passed most of the afternoon in the two main squares, just sitting on walls, watching.  I did buy some cherries, dates and olives at the market.  The meat section sold parts of animals I have never seen and the fish section, with its slippery floor, was one of the scariest I have seen yet with quite a selection of fish eyeballs looking at you. I hadn't fully recovered from feeling seasick on the ferry, and the strong smell did not help.
At one point, a hefty woman wearing a jalaba and hijab sat down next to me.  After awhile, I offered her some cherries, which she declined.  A little while later, a friend of hers wearing a garish scarf joined us (you start to notice the fashion of jalabas and hijabs after a while), squeezing between the two of us even though there was plenty of room on the other side of her friend.  She proceeded to try to get money from me, pointing to Allah and rubbing a coin in my face.  I laughed and told her that she should give me money, as should Allah.  Or course she only spoke Arabic, but she understood and actually laughed heartily. By the time they got up to go, there was an understanding that we were all in this together and she wished me "adios", adding "mañana."
I blew them kisses. 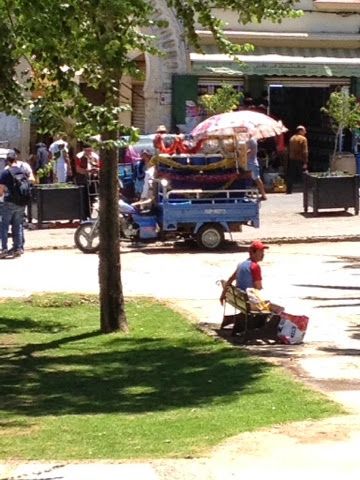 I really didn't want to go back into the medina and be followed around again. As far as I could determine though, there was only one way to get to the hostel. So off I went and my expectations were realized. I had barely rounded the corner near the terrace stairs when Jamal emerged from nowhere and asked, "Where have you been so long?"
Even though I really wanted to go back to the hostel and go to the bathroom, maybe shower off some of the grit and get off my hot feet and still sore toe, I just gave up.  "Fine," I said. "I'll come for tea."
It turned out to be a very cool scene. I had a traditional Moroccan meal with five Arabic men sitting on hassocks in the back room of a rug shop, followed by tea of course.  Everyone was related and part of a nomadic tribe from the southern morocco desert which makes the rugs and were in town just before Ramaden to sell them. The group is called Nomads for Human Development and their basic precepts are to preserve the Berber culture, live sustainably, and ensure fair trade. I gave them my dates and olives. 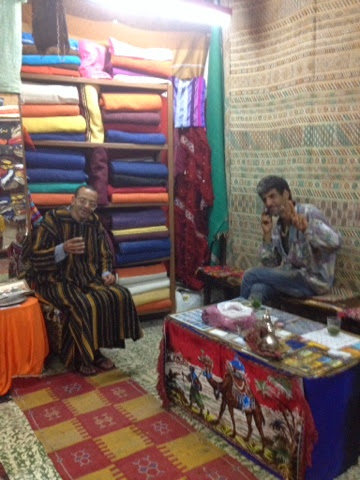 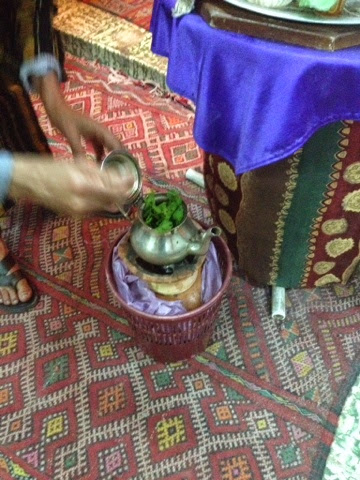 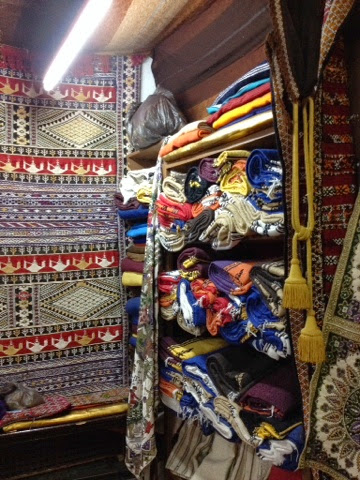 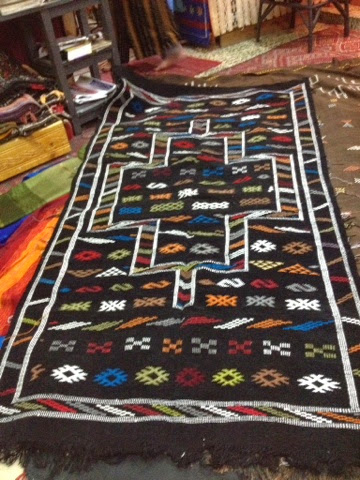 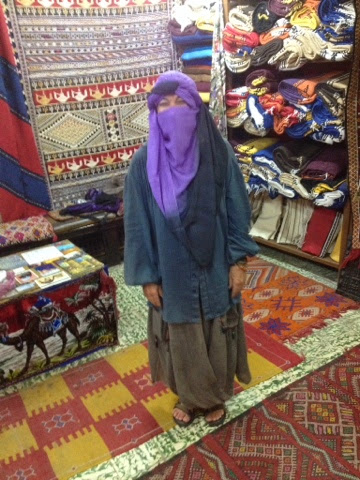 they made me one of them.